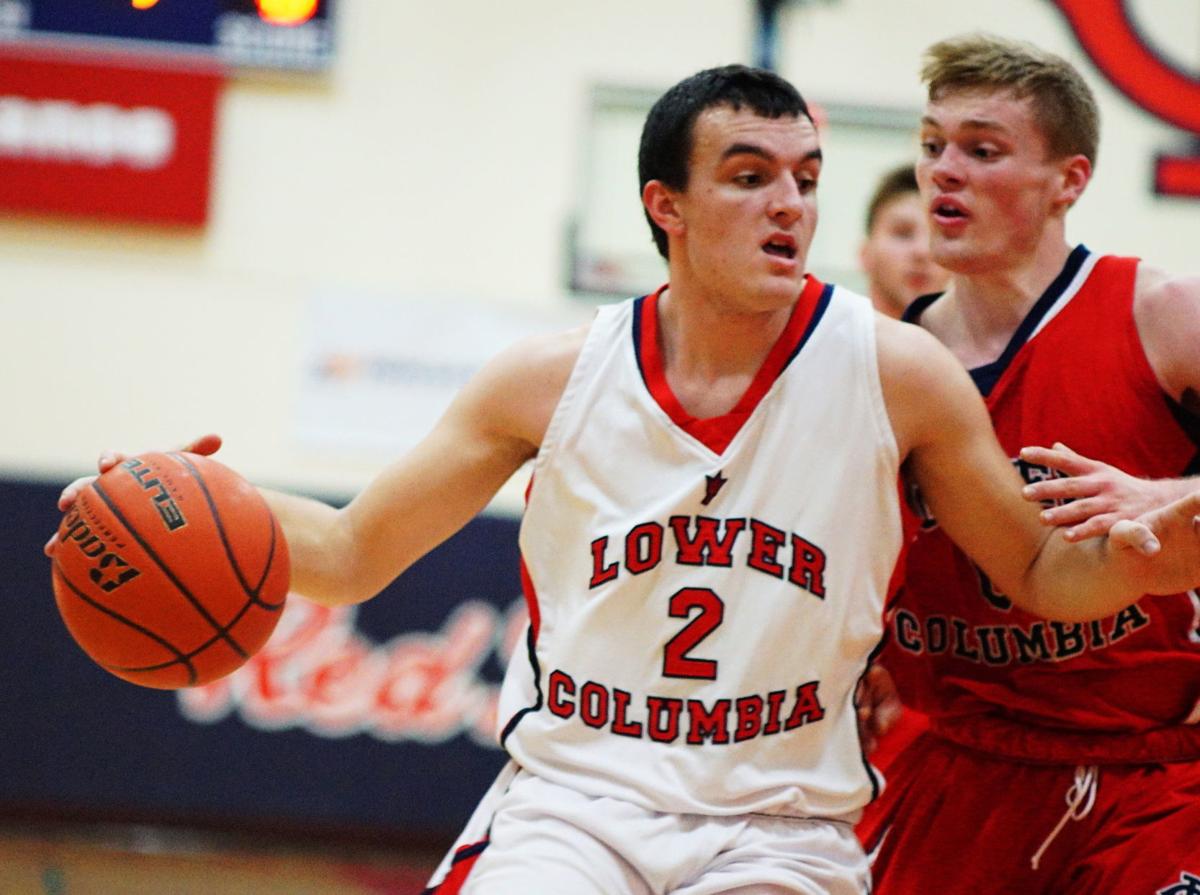 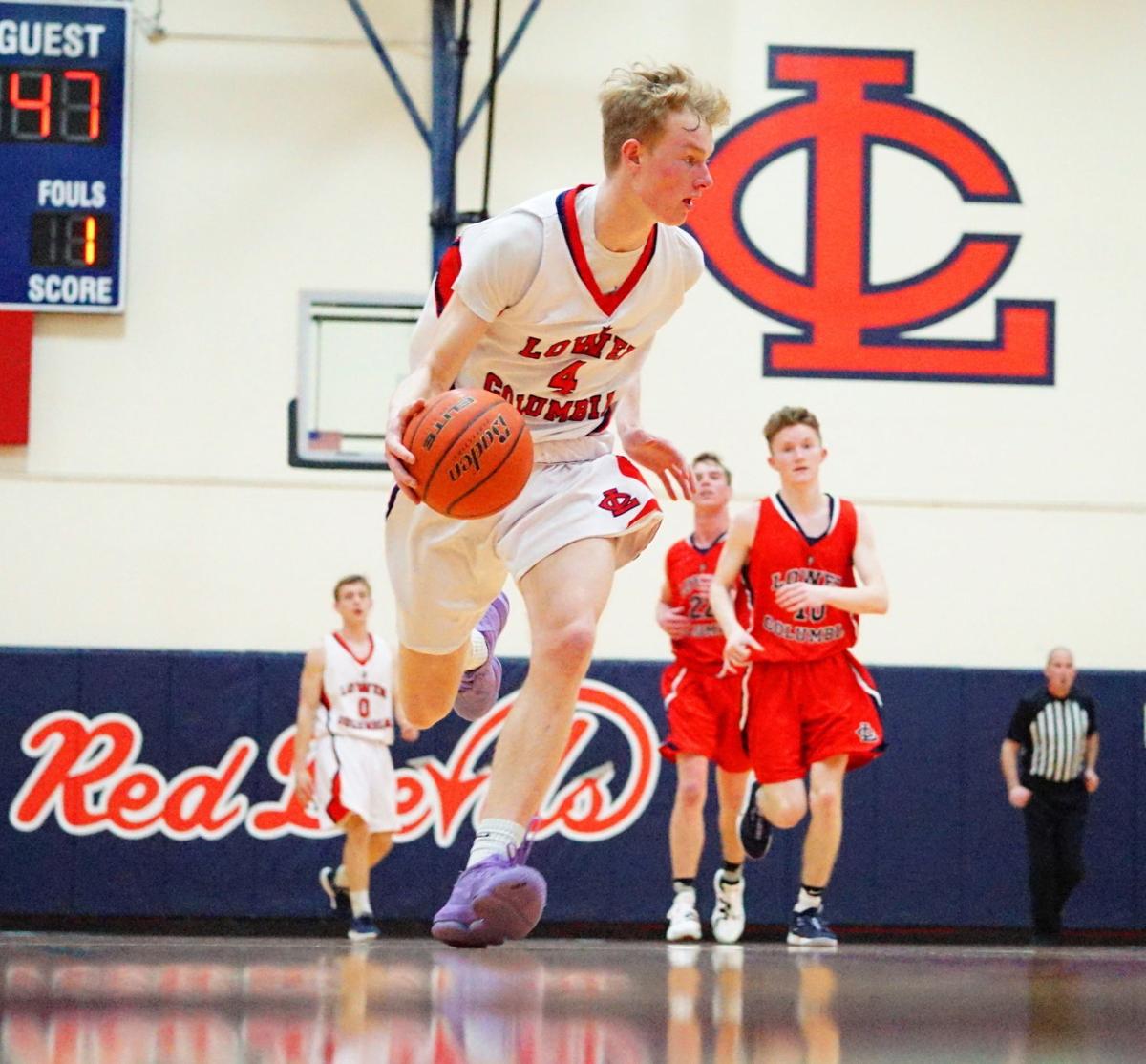 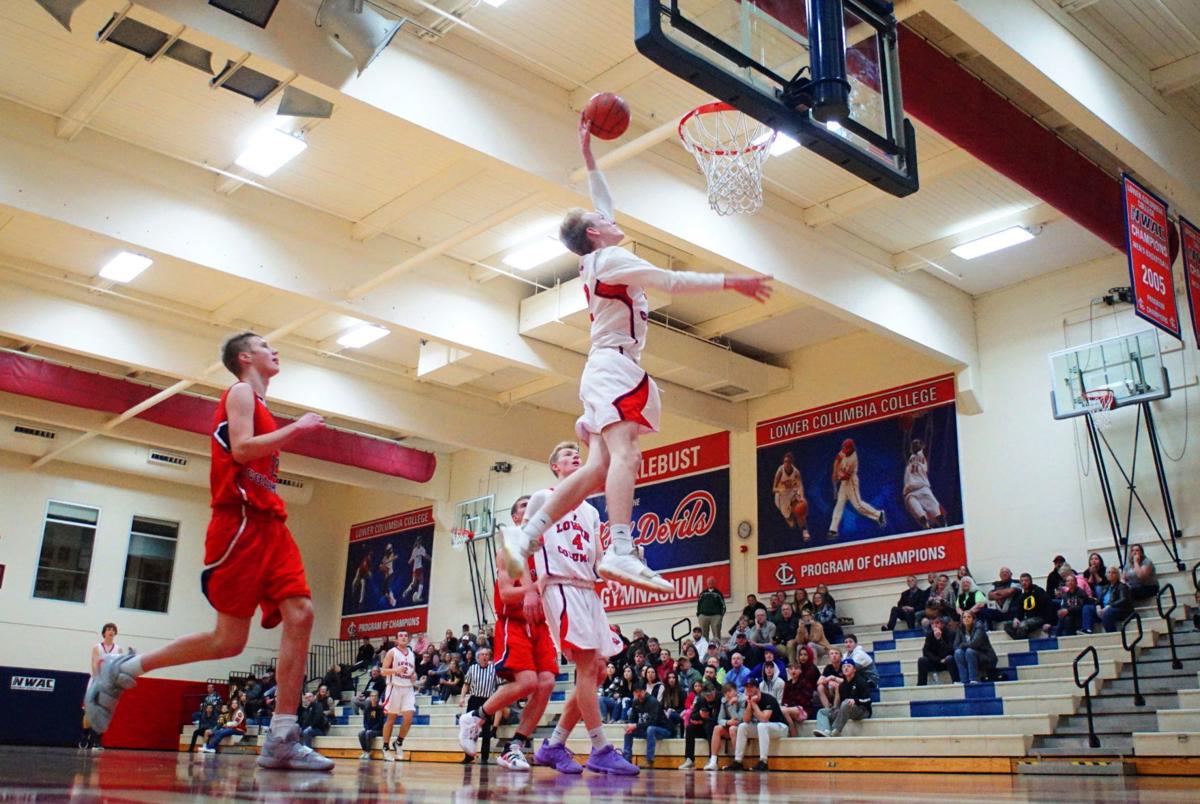 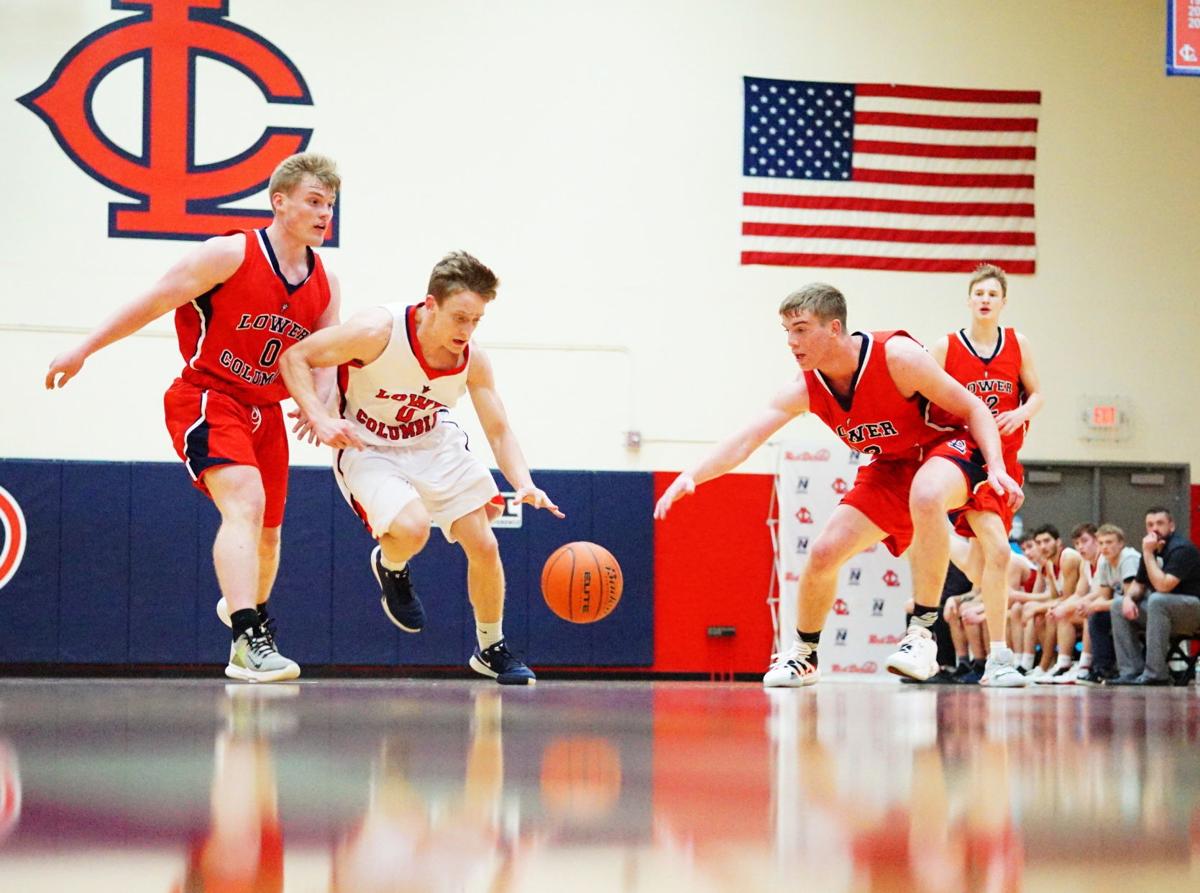 Kelso's Dillon Davis looks for an open man in late first half action at the Senior
Boys All-Start game at Lower Columbia College. 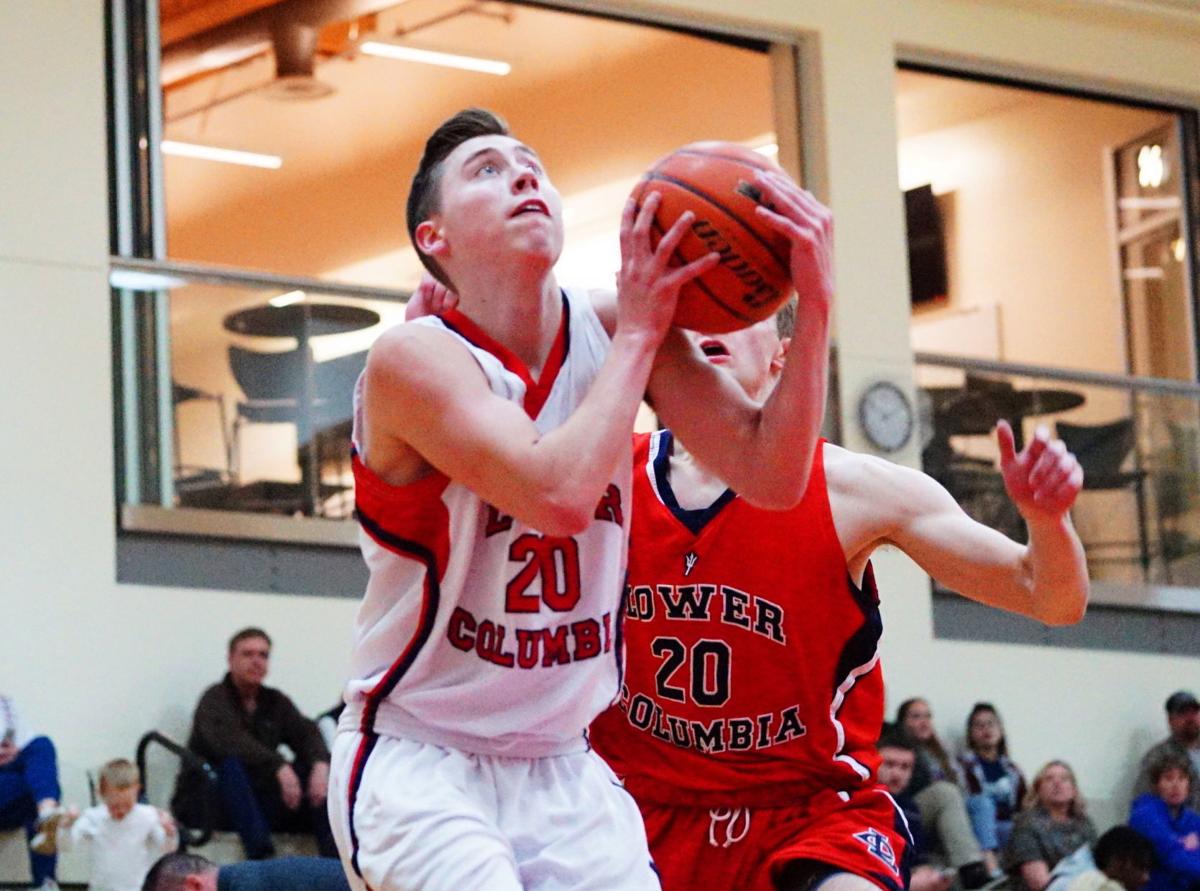 Kelso's  Gage Tippery  moves in for the score in the second half of
the Senior Boys Lower Columbia All-Star Game in Longview on
Tuesday night. 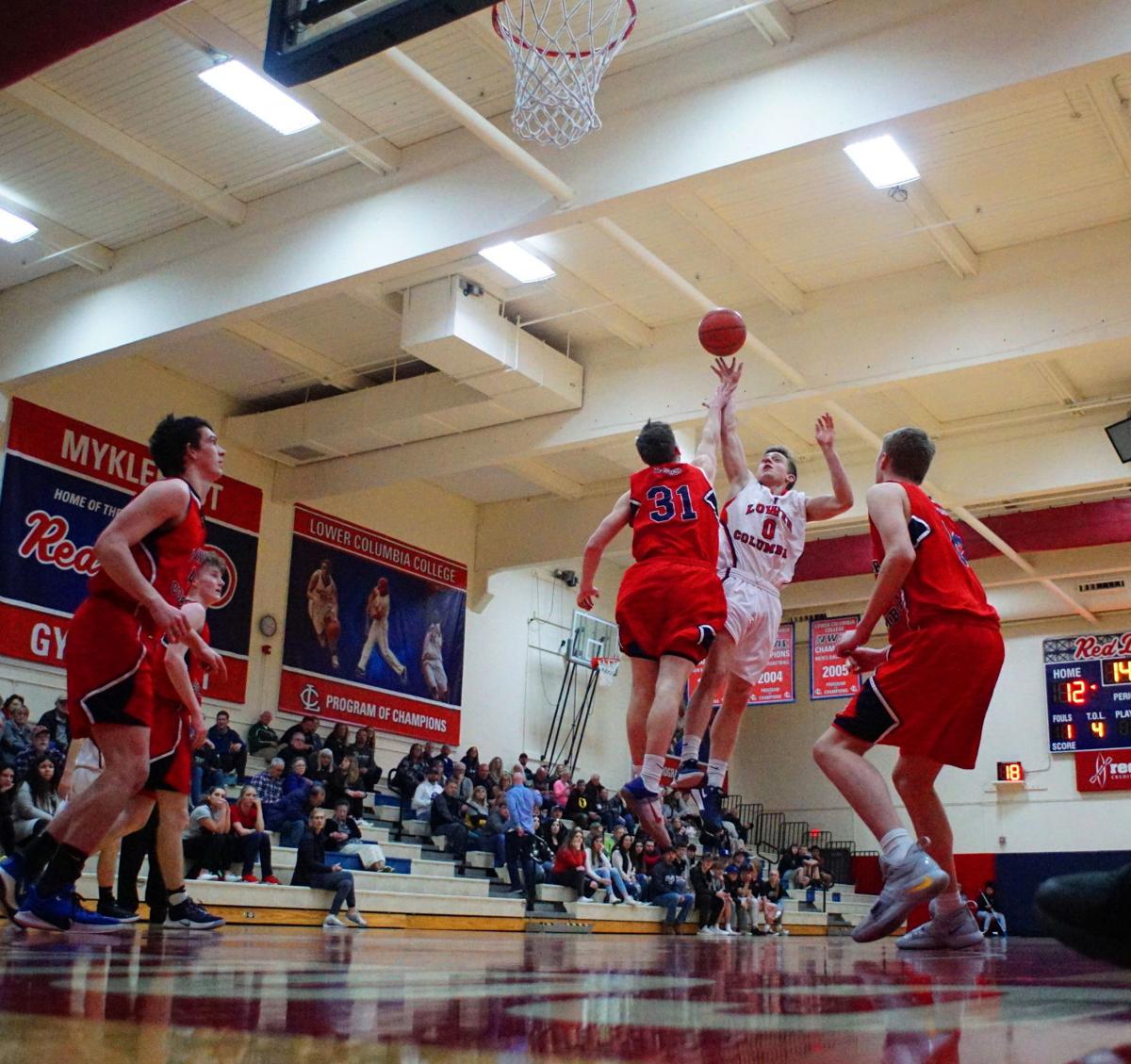 At All-Star games the final score is hardly ever the point. Rather, it’s all about the quality of the show.

Here at Myklebust Gymnasium on Tuesday the Lower Columbia Senior All-Star game did not disappoint for those who braved the crowded space and came to cheer on their personal favorite prep player one more time.

Team Red, led by R.A. Long coach Jeray Key, was able to emerge with a 114-104 victory but there are other numbers that are more telling. Specifically, there were ten “I believe I can fly” missed dunk attempts in the contest that were gleefully accented by a trio of successful flushes down the stretch.

The Red squad included the game’s MVP Mason Westerholm of Knappa who tallied a game-high 33 points with a barrage of long range strikes plus a pair of dunks that found their way home.

Williamson accounted for one of the night’s many missed dunk attempts when the ball slipped out of his hands on the way up for what would have been a big flush. The ball still found its way through the cylinder for two of Williamson’s 12 points and the Lumberjack made the most of his big opportunity because he had a game plan before liftoff.

“Just try to catch a body. Try to do something cool,” Williamson said of his All-Star game mentality. “I still rocked the rim!”

Suited up opposite of teammate Ryan Plampin, who was rostered with Team White, Williiamson admitted that it was weird at first to be playing alongside guys who used to be adversaries, at worst, or who were strangers, at best.

“I was kind of nervous at first playing with guys that I didn’t know but I had two coaches, Coach (Rally) Wallace and Coach Jeray tell me when you get the ball just try to score,” he explained.

The first half of the contest, however, featured a blistering blitzkrieg of three-point attempts by both sides that left the nets smoldering. Calvin Baze (14 points, 9 assists,10 rebounds) and Dylan Valdez (20 points, nine rebounds) led the Red and White attack, respectively, but on a night with no consequences nearly every player on each team managed to heave at least one attempt from beyond (or well beyond) the arc.

For awhile the associated shooting percentage was outstanding, but a regression to the mean was looming, and inevitable, so both benches slowly began to change their tactic.

Jason Buffum, a former Woodland and Lower Columbia player who now coaches Ridgefield, was in charge of Team White on Tuesday and he was the first to remind his players that you are in fact allowed to score points inside of 25-feet during an All-Star game. Not that the coach they call “Buff” was overly concerned with the eventual outcome.

“Just enjoy it and have fun and then, hey, maybe screen somebody every once and awhile and try to get to the hoop. It’s not just about this Golden State Warriors style of basketball,” he said.

Still, Buffum acknowledged that the Senior All-Star game is mostly about the memories and connection made.

You never know, this might be your last time playing,” Buffum noted. “They’ve got to enjoy this because a lot of kids remember this stuff. Who cares if you lost your last game? But, ‘At the All-Star game I had seven threes, how cool was that? Or I missed a dunk, or I almost dunked.’”

Over on the Red sideline coach Key was relaying a similar message to his team as they rode their talented roster to victory.

“It kind of happened mid-game. Coach told us bigs to start leaking and then we tried it. Some guys got it and some didn’t, as you guys could see,” Williams said in reference to the bulk quantity of failed dunk attempts.

Or, at worst, they managed to entertain the crowd with flashes of spectacular failure.

Kelso’s Drew Tack, suiting up for Team White for the night, had a game-high three botched dunk attempts that had the crowd “oohing” in anticipation and “awwing” in disappointment. However, the misses were primarily the result of overzealous lob attempts from his teammates. Really, there was no fault of his own other than his reputable springs that enticed his teammates to take chances they otherwise might not.

Both Cline and Richendollar, who made the trek south from Winlock, agreed that playing in the midst of so many talented players makes even the most talented hoopers reevaluate their approach.

“It changes a lot because you’re surrounded by a bunch of good players so you don’t want to be a player who shoots all the time and become ‘That Guy.’ You just want to try to utilize everyone no matter what,” Cline explained.

After besting his fellow Cardinal in their final time sharing the floor Richendollar said the game lived up to almost all of his expectations, and even eclipsed a few along the way.

“I definitely knew coming in that we were going to have a lot of fun and try to put up a lot of points,” Richendollar said. “I thought it might be a little more competitive than it was but I enjoyed the laid back style of play and all the running, for sure.”

No matter what side they were on, everyone in attendance agreed that Westerholm stole the show. That display included an impressive windmilling dunk down an open lane in the final minute of the contest.

“The MVP, he balled out. He was good. I thought he was just a big but he’s coordinated and he can ball,” Williamson noted.

“He just came out and started hitting three like crazy so I was very impressed with him,” Cline added.

“I didn’t think for how big he was that he’d be able to shoot from that far out,” conceded Richendollar.

“A lot of the small school kids know each other because that’s how small ball works but they don’t know the two-time MVP from River (Nate Snook) and he’s one of the best players in the area,” Buffum said. “One kid asked me where I coach and I said Ridgefield. He didn’t even know where Ridgefield was.”

Little by little, like a duffer in a cutoff crisscrossing down the first fairway, things are beginning to look more normal on at least one pop…

And so, another domino falls.

Jerry Sloan, the coach who took the Utah Jazz to the NBA Finals in 1997 and 1998 on his way to a spot in the Basketball Hall of Fame, died Friday. He was 78.

What can we learn from Jordan and 'The Last Dance'? Forget about what might have been and just stay in the moment.

If only life worked like film or fairy tale, with the ability to press stop - or at least pause - when the delight and exhilaration reaches its pinnacle.

NEW YORK (AP) — Major League Baseball did not include an economic proposal during its opening presentation to the players' union on terms to start the coronavirus-delayed season.

Kelso's Dillon Davis looks for an open man in late first half action at the Senior
Boys All-Start game at Lower Columbia College.

Kelso's  Gage Tippery  moves in for the score in the second half of
the Senior Boys Lower Columbia All-Star Game in Longview on
Tuesday night.