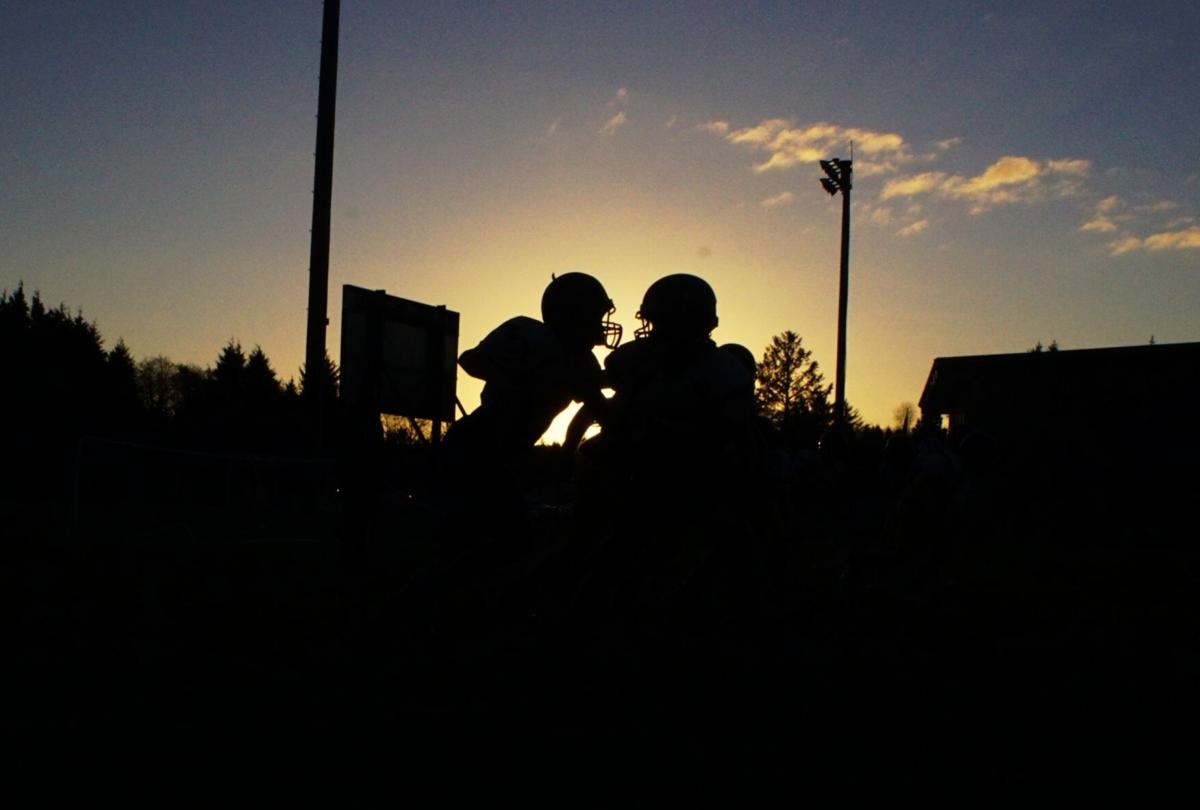 The sun sets on another practice at Ilwaco High School on Tuesday, Feb. 9. The Fishermen continued to prepare for theirs season-opening game against Raymond- South Bend, even as the weather turned wet, white and cold. Because of snow, Saturday's kickoff was postponed until Monday at 1 p.m. in South Bend. 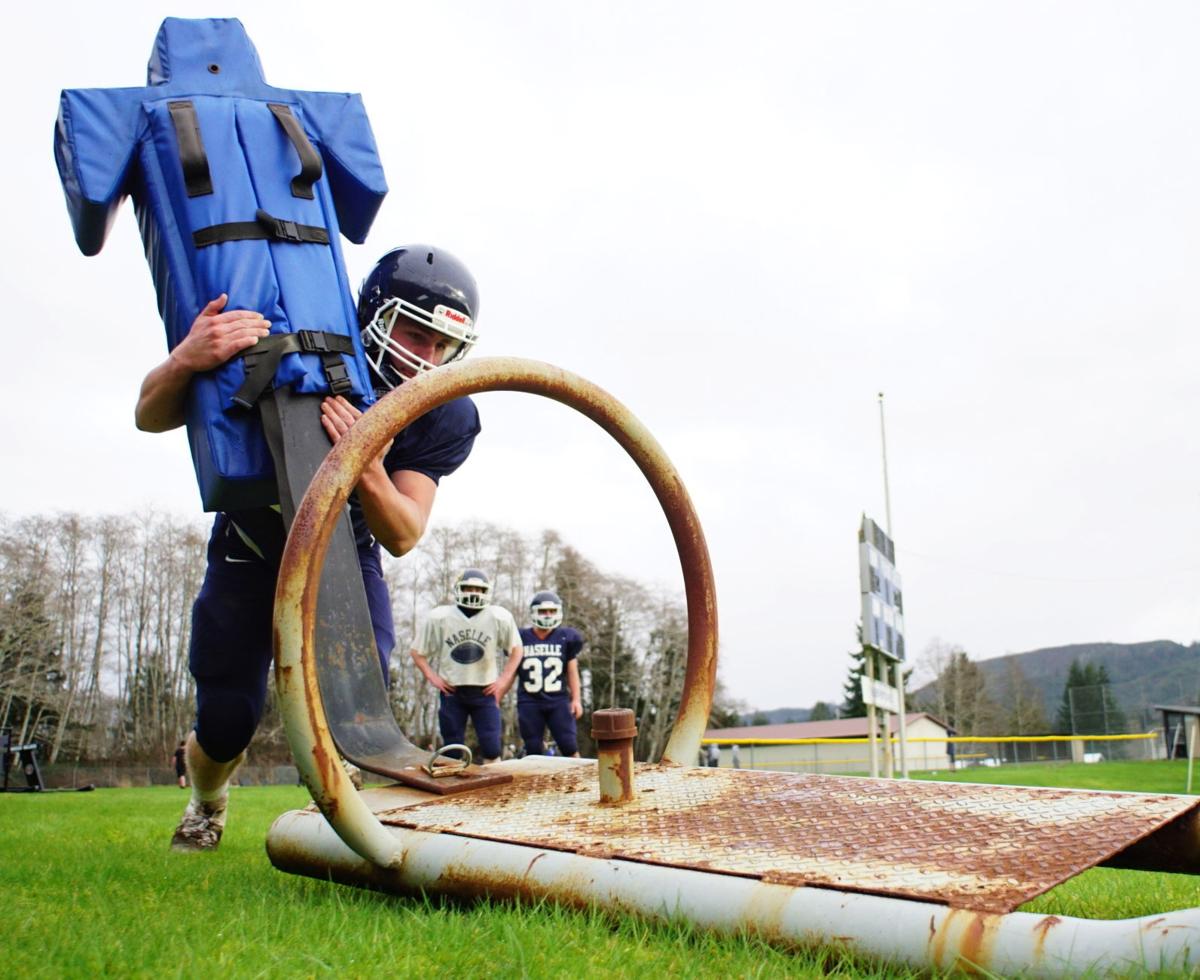 Comet senior Jimmy Strange hits the one rusty man sled during blocking drills at Naselle High School on Feb. 8. The Comets are set to open their season at home against Mossyrock on Feb. 15 at 5 p.m. 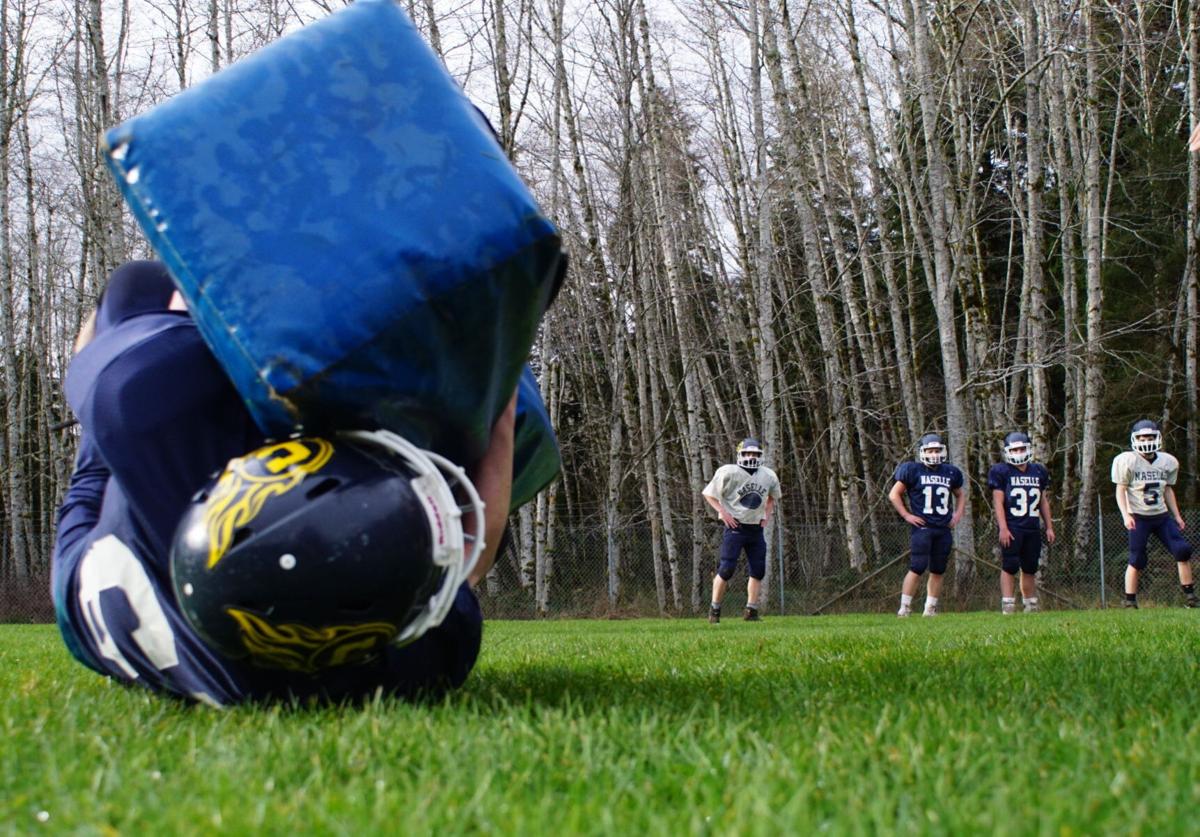 The Naselle defense gets in some tackling drills at their practice session in Naselle on Feb. 8. After taking second in State last season the Comets look to pick up where they left off at home against Mossyrock on Feb. 15 at 5 p.m..
Josh Kirshenbaum

More specifically, he was talking about the band’s 1994 song, “Superunknown.”

Alive, in the superunknown

First it steals your mind

And then it steals your soul

“I said, ‘Guys, I’ve never thought of another time that I’ve been alive where that song makes sense,’” Cease said. “That’s kind of where we’re at. We don’t know what’s going to happen week-to-week. All we know right now is that we have a game Saturday at 1 (p.m.), and we need to go out and play it like it’s the only game we’re gonna play, because we don’t know, it could be. We aren’t in control of that kind of stuff.”

Of course, Cease ended up being too bold in even assuming that much.

The Fishermen didn’t take the field Saturday; no team in the area did, as a snowstorm the likes of which haven’t been seen in years hit the region, cancelling pretty much everything that was set to take place over the weekend.

Now it’s Monday that’s set to mark the start of the season, a slate of regional games 15 months in the making, as Ilwaco plays Raymond-South Bend, Naselle hosts Mossyrock, and Toledo welcomes Rainier (WA). Then, on Tuesday, Winlock faces Taholah.

And it’s going to be the start of a football season unlike any other the state of Washington has ever seen.

“When August rolled around and we weren’t doing anything and we weren’t on campus for school, that was kind of shocking,” Winlock coach Ernie Samples said. “Now, we all get geared up and excited to go, we’ve got something scheduled, and the snow comes. It’s definitely strange.”

Even if snow wasn’t covering every surface outside six inches deep, teams would still have to deal with the new reality of playing football after the new year. The sport has been tied to autumnal ritual pretty much as long as it’s been around; practice starts in August when the days are long and warm, and as the season begins, the rains start to come, until the postseason arrives with nights that begin early and days that stay cold.

Now, teams will be playing football in February, with near-constant precipitation coming down, on fields that have been taking rainfall for the past five months, with no end to the wet stuff in sight.

“We’re not even trying to pretend that we’re not going to be playing in slop and mud,” said Cease, who guessed that a good chunk of his field would be underwater for much of the season. “Running routes and throwing the ball is not the easiest thing to do.”

And field goals? Good luck with that.

Beyond the basic conditions, coaches — in all sports, not just football — are going to be dealing with the effects of 11 months worth of coronavirus-related shutdowns and stay-at-home orders. Those ramifications are likely to last all season.

Without a normal preseason, conditioning levels are all over the place. Instead of having a full slate of offseason workouts, followed by fall camp, teams got just a couple weeks in the fall to have organized activity when restrictions were lifted briefly, followed by three months of relying on athletes to handle their own workouts.

“We’ve seen our kids in different shapes this year. A few of them when we were trying to do conditioning in October were almost throwing up during our warmups,” Cease said. “They decided, ‘Ok, if we’re gonna play football we better get in some sort of shape.’ They kind of took it upon themselves when we got shut down again to make sure they got into condition, and it does show. We’re in better shape, but we’re not in the shape we’d be in if this was August or September right now.”

And without the allure of games in front of them, those fall workouts weren’t nearly as productive for many players as coaches would have liked them them to be.

“In the fall, we were working out once a week, but it was kind of lower energy and the kids weren’t as into it,” Toledo coach Mike Christensen said. “Now, they’re fired up to play, so it’s exciting.”

Come that first game, teams are going to see the results of how good, or poorly, their conditioning has gone. But no matter how well it went, it won’t be as good as normal.

Luckily for all involved, there have been some changes to the flow of the game to accommodate lower fitness levels. Timeouts have been lengthened from one minute to two to give players a bit more time to catch their breath — and coaches are ready to use them in that capacity instead of saving them to stop the clock at the end of a half. Beyond that, both Cease and Naselle coach Jeff Eaton said there were plans for officials to add extra timeouts of their own — akin to media timeouts in college football and the NFL — to help ensure players aren’t straining themselves too much.

But while teams have had little time to condition, they’ve had even less time to gel as a unit. Previously constrained to practicing in pods of six, nobody was able to put their entire offense or defense on the field at once — let alone players on opposite side of the ball at the same time — until last week.

“Your backs are running it and your offensive line is running it, but we didn’t see everybody all together until last Monday,” Christensen said. “It feels like you’re on the right track when everyone’s doing it in individual groups, and then you got together and it was a mess.”

But despite all of it — the shortened schedule, winter weather, the abbreviated conditioning, the less-refined play, everything — every team is beyond ready to finally get out and play. After all, they still don’t know how often they’ll be able to get out and do it all again.

Cease said the Fishermen plan to have Senior Night at their first home game, because the way this year’s gone, there’s no assurances of a second second contest in front of the concrete grandstand. But any games at all are surely better than none, and after so many teams around the state experienced the reality of sitting out a season last spring and fall, everybody is painfully aware of that fact.

“I told the seniors, ‘If we would have played in the fall, your football careers for most of you would be done. You have to make the most of every opportunity you get, and this is an opportunity to keep playing football,’” Christensen said.

Football is alive in the superunknown, indeed. But the fact that it’s alive at all is what matters most.

The sun sets on another practice at Ilwaco High School on Tuesday, Feb. 9. The Fishermen continued to prepare for theirs season-opening game against Raymond- South Bend, even as the weather turned wet, white and cold. Because of snow, Saturday's kickoff was postponed until Monday at 1 p.m. in South Bend.

Comet senior Jimmy Strange hits the one rusty man sled during blocking drills at Naselle High School on Feb. 8. The Comets are set to open their season at home against Mossyrock on Feb. 15 at 5 p.m.

The Naselle defense gets in some tackling drills at their practice session in Naselle on Feb. 8. After taking second in State last season the Comets look to pick up where they left off at home against Mossyrock on Feb. 15 at 5 p.m..
© Copyright 2021 The Daily News Online, 770 11th Ave Longview, WA | Terms of Use | Privacy Policy
Powered by BLOX Content Management System from TownNews.com.
You don't have any notifications.