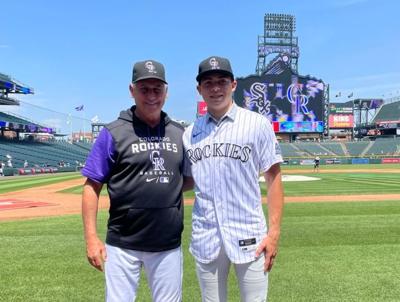 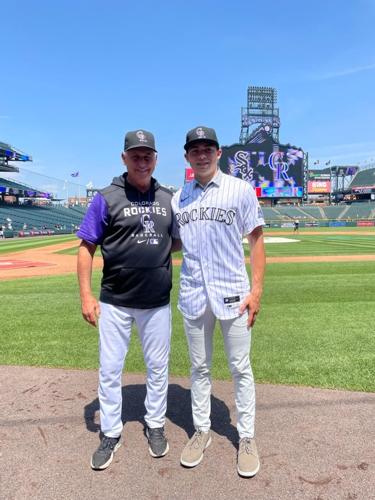 Colorado Rockies manager Bud Black poses for a photo with Jackson Cox on Wednesday, July 27 after Cox signed a contract to play for the Rockies organization. Black and Cox are both from Cowlitz County. 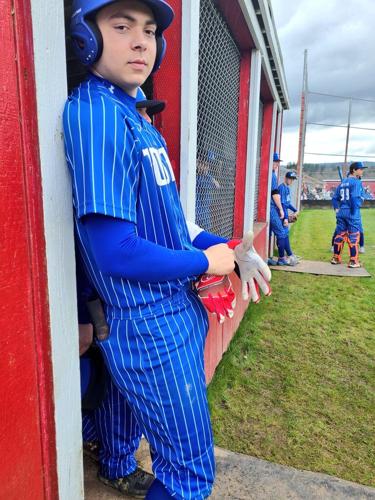 Jackson Cox shows off Toutle Lake's new pinstripe uniforms during a game at Castle Rock during the 2022 high school season. Cox sported a new set of pinstripes earlier this week after signing a contract to play for the Colorado Rockies organization. 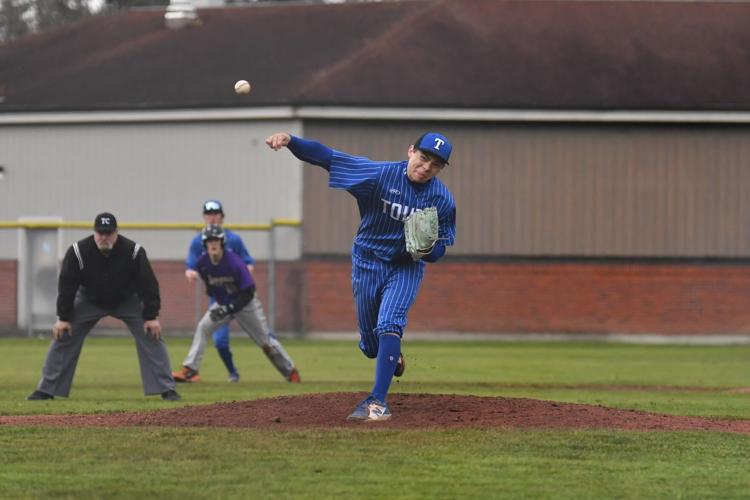 Jackson Cox throws a pitch in a home game in Toutle against Onalaska during the 2022 season. Cox was selected in the second round of the MLB draft on July 17 and signed a pro contract on July 27.

Colorado Rockies manager Bud Black was fly fishing when the news broke. Not wanting to scare the fish away while enjoying a brief respite from the rigors of the 162 game major league baseball season the Longview native had left his phone behind before setting out to make flies dance upon the eddies of the cool waters.

By the time Black decided to let the fish go free his phone was hot from all the messages that’d been piling up in his absence. That’s what happens when a major league organization selects a high school kid from the same baseball backwaters that its skipper was plucked from so many years ago.

For local baseball fans the hope is that Toutle Lake graduate Jackson Cox will. like Black, eventually transition from a big fish in a small pond to something like the old man and the sea — unrelenting, calloused and legendary like the great DiMaggio.

“I was doing some fly fishing down in southern Colorado and when I got back to my phone I had a number of texts from people back in Southwest Washington,” Black said. “Then I saw Toutle and I said, ‘Whoa! He’s from our neck of the woods.”

Black, a Mark Morris High School and Lower Columbia College alum, saw his career in professional baseball begin in 1979 when he was selected in the 17th round of the major league draft. More than four decades later, he was on hand to welcome Jackson Cox, a product of Toutle Lake High School, to the professional ranks after the Rockies selected the hard throwing right-handed pitcher in the second round of the draft earlier this month.

Like the mountain snowmelt that flows south to create braided streams full of piscatorial prospects, Longview and Toutle are connected by a highway of rivers carved out by a volcano and time. Now Cox will have to figure out how to swim upstream from the lowest levels of pro ball in hopes of reaching the gilded waters of the major leagues. But after officially inking his first pro contract on Wednesday to the tune of $1,800,500, it’s clear the Rockies won’t be tossing their catch back any time soon.

Cox, who’s fastball has long sat comfortably above 90 miles per hour, made a name for himself among pro scouts thanks to his breaking ball. In an era where spin rate is its own currency, Cox minted himself a lucrative future based on his ability to make the ball move. Out of 22 draft selections by the Rockies in this year’s draft, he was the only high schooler in the bunch.

“We’ve got bios on all of our picks but I bore down on Jackson a little bit,” Black said. “Our scouts liked him. He’s been on the radar for a couple of years, across all teams, not just the Rockies.

“From what our scouts told me they like his arm. They like his overall stuff, but his ability to spin the ball — the curve ball has elite spin. And they think there’s a little bit more velocity in there since he’s just a high school kid.”

After signing his first pro deal Cox and the rest of the Rockies’ top picks were invited to Coors Field on Wednesday for a meet and greet session at the ballpark that they hope to one day call home. Donning a white jersey with purple pinstripes Cox stepped out on the greenest grass and surveyed the confines of the mile high baseball cathedral before posing for a photo on the field with Black.

“To meet Buddy Black, an LCC legend, that was pretty cool,” Cox said. “We talked a little bit about being from similar areas and just working hard every day.”

After being selected with the 50th pick on July 17, there was some speculation that Cox might turn down the deal and head off to Eugene to cash in his scholarship offer to play D-1 college ball for the Oregon Ducks. After negotiating for nearly $300,000 more than the allotted slot value, Cox found it even easier to pick pro ball as his path forward in the game.

“It did happen a lot quicker than I expected. I was home for just a few days and then went to Denver to sign the contract,” Cox said.

With the negotiations, hand shaking and introductions out of the way, Cox has already moved along to Scottsdale, Arizona where he is working out with the Rockies organization at their spring training facility.

“It honestly doesn’t feel too rapid, it’s been a smooth transition,” Cox said. “I love being back and being back on the field with the guys.”

Black explained it’s standard practice for young draft picks to begin in the Arizona summer league before transitioning to the instructional league in the fall.

“There’s a steep learning curve for high school pitchers. Not only performance but mentally and physically,” Black said. “He’s going to be going to work every day as a baseball player.”

Like a fish returning from saltwater, Cox will have to toil his way through the vast minor league system in order to make it to the heady waters at the top. It’s a journey he feels uniquely prepared for, even if he’s not exactly sure where that journey will begin when rosters are announced next spring.

“The timetable is different for every player. Jackson will set his path and we will do everything to help him get his feet on the ground… but he’s got a good head start because he’s a phenomenal athlete,” Black said. “It’s going to be an education.”

In the meantime, Cox is doing his best to make smart decisions with his newfound riches. He’s already smart enough to know that money, like the Colorado River trying to reach the ocean, has a nasty habit of running out when you need it most.

“I bought a chain (necklace with a Rockies pendant), otherwise the rest is going in the bank,” Cox said. “I’m a couple contracts away from being able to buy anything fancy.”

Pickleball is the fastest growing sport in the United States two years running. Now at 4.8 million players nationwide according to the Sports & Fitness Industry Association, a growth of 40 percent over the last two years. Here in Longview, 96 people are members of the Longview Pickleball Club which needs more infrastructure to meet the growing demand.

It’s been said that it doesn’t matter so much how you start, but how you finish. Tuesday night it was R.A. Long coach Taylor Wallace reciting …

Pigskin Prophets: Dumping the septic on Main St. and searching for the funnies

KALAMA — On the same night that the Chinooks girls soccer team received a sign commemorating their State championship from last season, they w…

WINLOCK — It’s hard to be an elite athlete while on your hands and knees, trying to find your wind in the short grass like some invisible diam…

Kathryn Chapin scored a hat trick to lead R.A. Long to a dominant 5-2 win over Washougal in a 2A Greater St. Helens League girls soccer contes…

YAKIMA — The Kelso volleyball team placed 5th out of 32 teams in the 2A-4A bracket of the SunDome Festival over the weekend.

A trio of seniors carried the Monarchs in the dominant three-set win over Woodland, Tuesday evening. Hallie Watson had a 100 percent game passing off the serve/receive stage of play, Kendall Blondin had a game-high 17 assists and libero Madi Noel led with 14 digs. The Monarchs won by scores of 25-8, 25-10, 25-6.

Who can afford to buy the Phoenix Suns?

Colorado Rockies manager Bud Black poses for a photo with Jackson Cox on Wednesday, July 27 after Cox signed a contract to play for the Rockies organization. Black and Cox are both from Cowlitz County.

Jackson Cox shows off Toutle Lake's new pinstripe uniforms during a game at Castle Rock during the 2022 high school season. Cox sported a new set of pinstripes earlier this week after signing a contract to play for the Colorado Rockies organization.

Jackson Cox throws a pitch in a home game in Toutle against Onalaska during the 2022 season. Cox was selected in the second round of the MLB draft on July 17 and signed a pro contract on July 27.