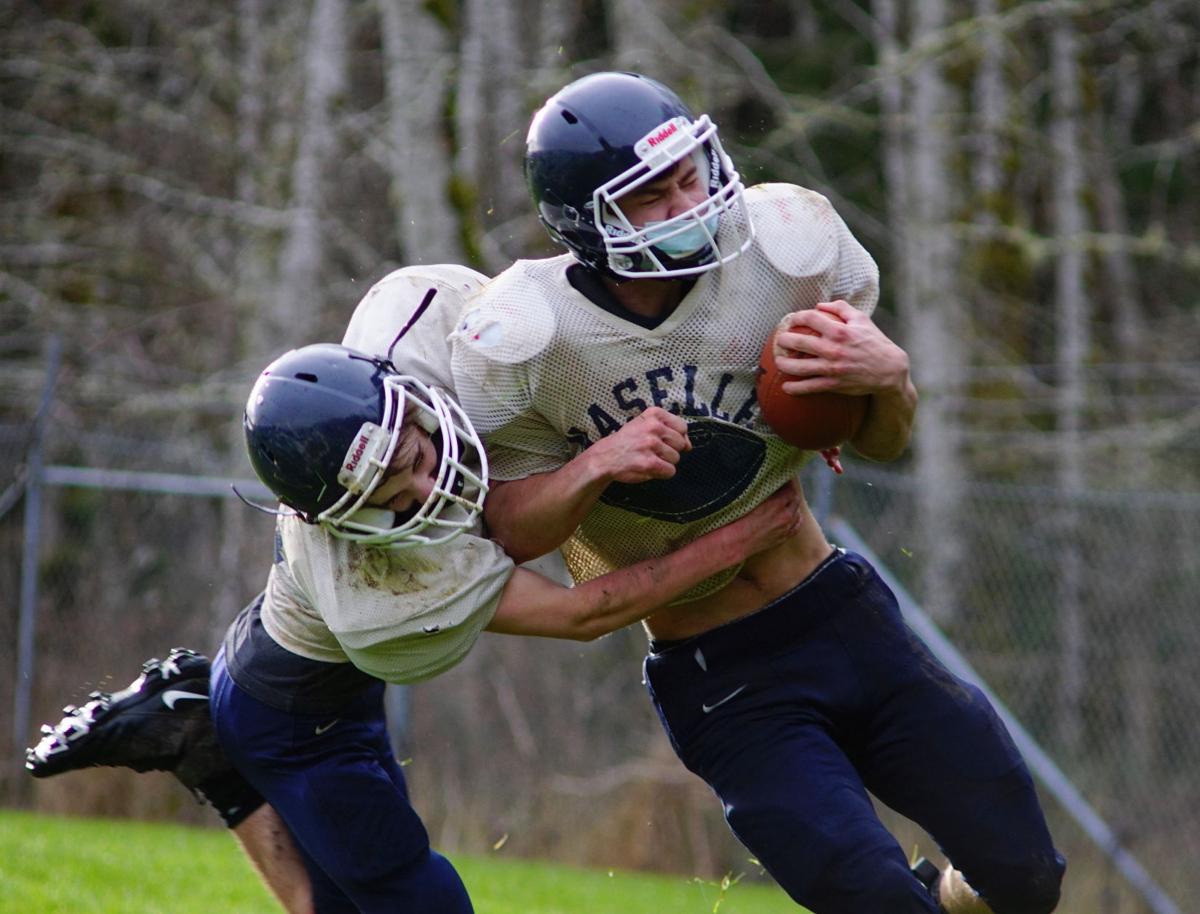 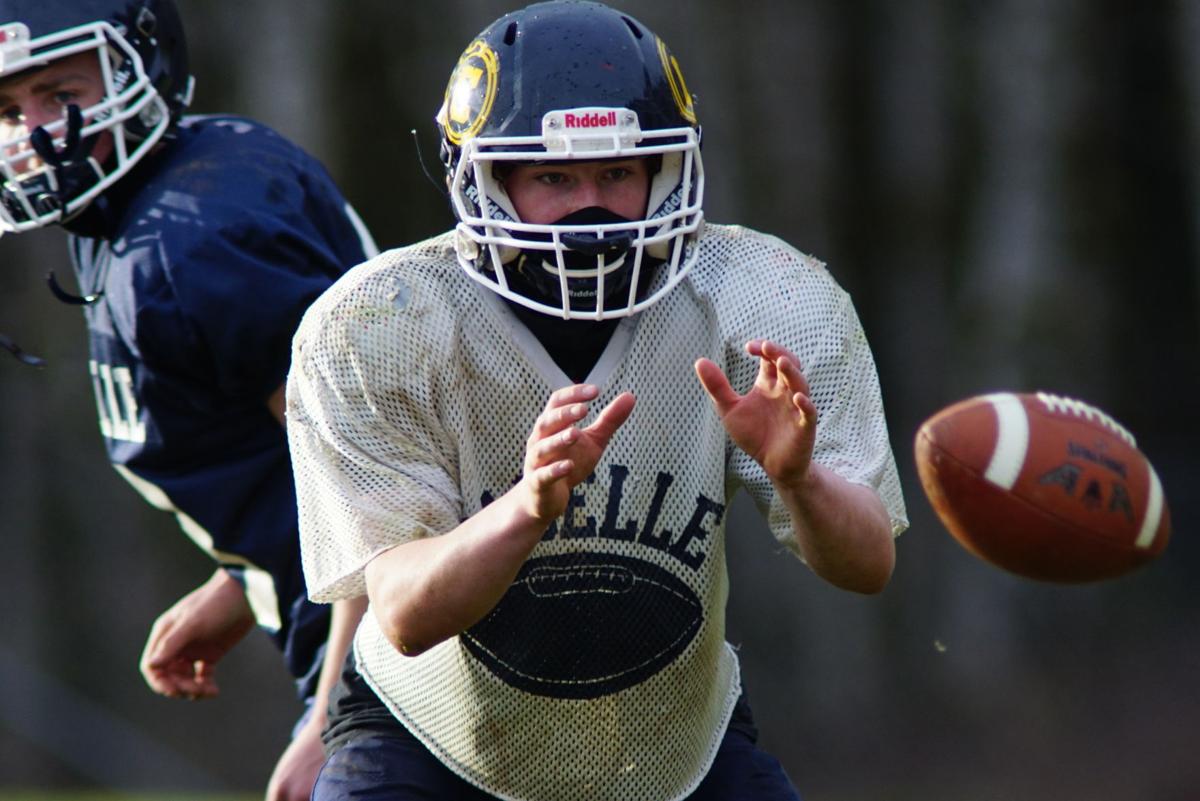 Comet quarterback Joey Strange handles the shotgun snap and gets ready to throw during the skeleton offense portion of practice in Naselle on Feb. 8. The Comets placed second in State at the 1B level in 2019. 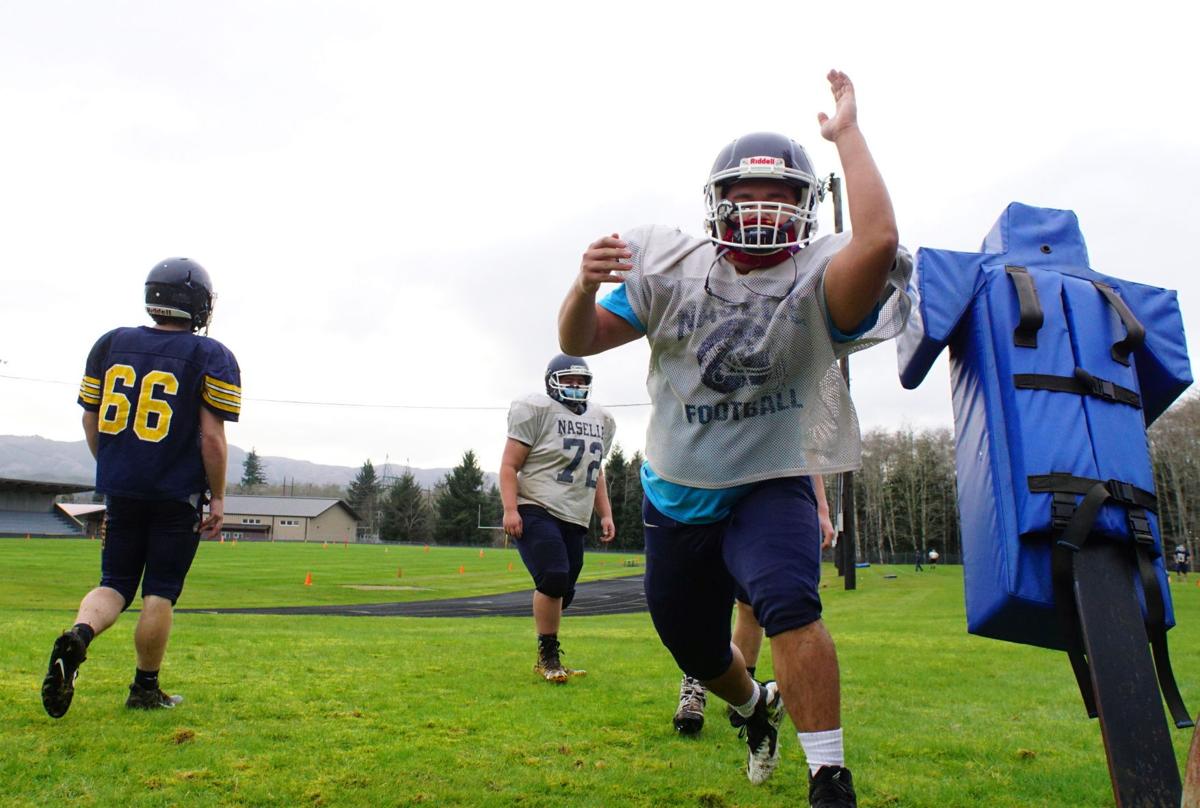 The Comets defense practices their "swim" technique using the one many sled at Naselle High School on Feb. 8. Naselle will welcome Mossyrock to town on Monday for the Vikings' first 8-man football game after dropping down a classification from the 2B ranks.

In 2019, when Jimmy Strange — the Comets’ starting tailback — went down with a hamstring injury early in the season, it was his younger brother Joey who came in to take over the lead back role. This year, with Jimmy back, Joey’s moved over to quarterback, meaning most of the time about one-quarter of the Naselle offense will be truly Strange.

Puns aside, this year’s giving coach Jeff Eaton flashbacks to the early 2010s, when his own two sons — Dustin and Robert — had a similar dynamic in the Naselle backfield.

“There were several times on film that you couldn’t tell who was gonna get the ball because they were both pulling on it,” Eaton said. “The other day at practice, Jimmy and Joey kind of did that, and I said ‘You guys can’t act like my kids did. I can’t go through another year of that.’”

The Strange brothers are going to be in the first offensive backfield combination Eaton puts onto the field with the Comets open their season Monday, but they won’t be in them all. Eaton said he’s currently running with 10 players in total — with an 11th hopefully on the way in a couple of weeks. That means that substitutions will come early and often, rotating everybody to give them at least a couple of plays off.

On the upside, the Comets’ tiny squad is made up almost entirely of players with significant experience, even the underclassmen. So while the conditioning isn’t where it would be if the Comets were coming off a normal offseason and fall camp, but Eaton actually thinks his team is ahead of the game in terms of a gameplan.

“On offense we have way more than I thought we would have in,” he said. “Pretty much everything in all the phases that we need to know for a couple weeks is in already. That part of it has really helped.”

With his players well-versed in his system, the Comets will be shuffling all over the field throughout the game. Jimmy Strange is still going to be an option in the backfield, when Joey or Colton Lindstrom need a break. When that move happens, Warren Wirkkala will move under center from tight end, but Eaton doesn’t anticipate a step back from the move, which he’ll have to make multiple times over the course of four quarters.

To make that move possible, the Comets can bring in Kolby Glenn — the boys basketball team’s starting point guard and one of two “backups” on the offense — to fill out the open spot on the outside.

In the trenches, Luke Johnson will be the extra lineman, rotating in to give Elmer Toftemark, George Wilson, and Daniel Holt a breather.

“If I had mostly new guys, or freshmen, or new kids to the school, we would not be anywhere close to being able to roll with this thing,” Eaton said. “But they’re returning guys, and they’ve all played quite a bit.”

LG: Elmer Toftemark (So.) had been RB

Comet quarterback Joey Strange handles the shotgun snap and gets ready to throw during the skeleton offense portion of practice in Naselle on Feb. 8. The Comets placed second in State at the 1B level in 2019.

The Comets defense practices their "swim" technique using the one many sled at Naselle High School on Feb. 8. Naselle will welcome Mossyrock to town on Monday for the Vikings' first 8-man football game after dropping down a classification from the 2B ranks.
© Copyright 2021 The Daily News Online, 770 11th Ave Longview, WA | Terms of Use | Privacy Policy
Powered by BLOX Content Management System from TownNews.com.
You don't have any notifications.