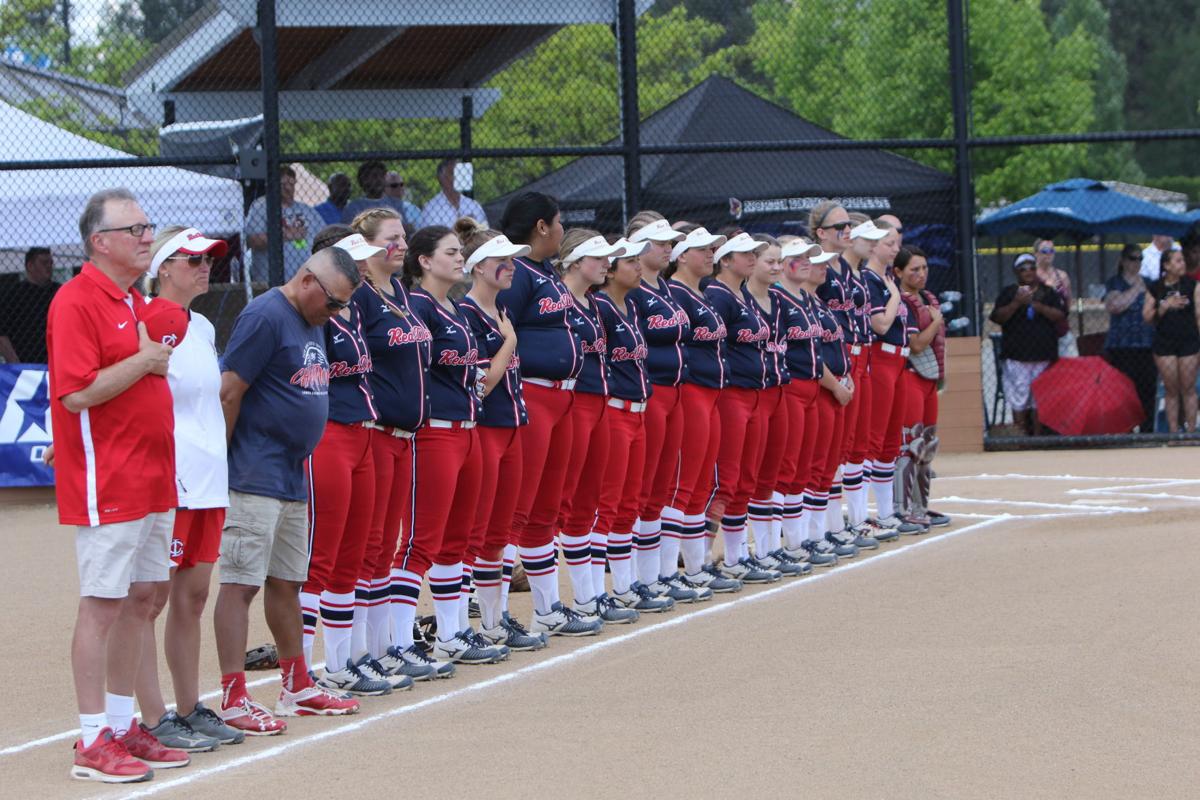 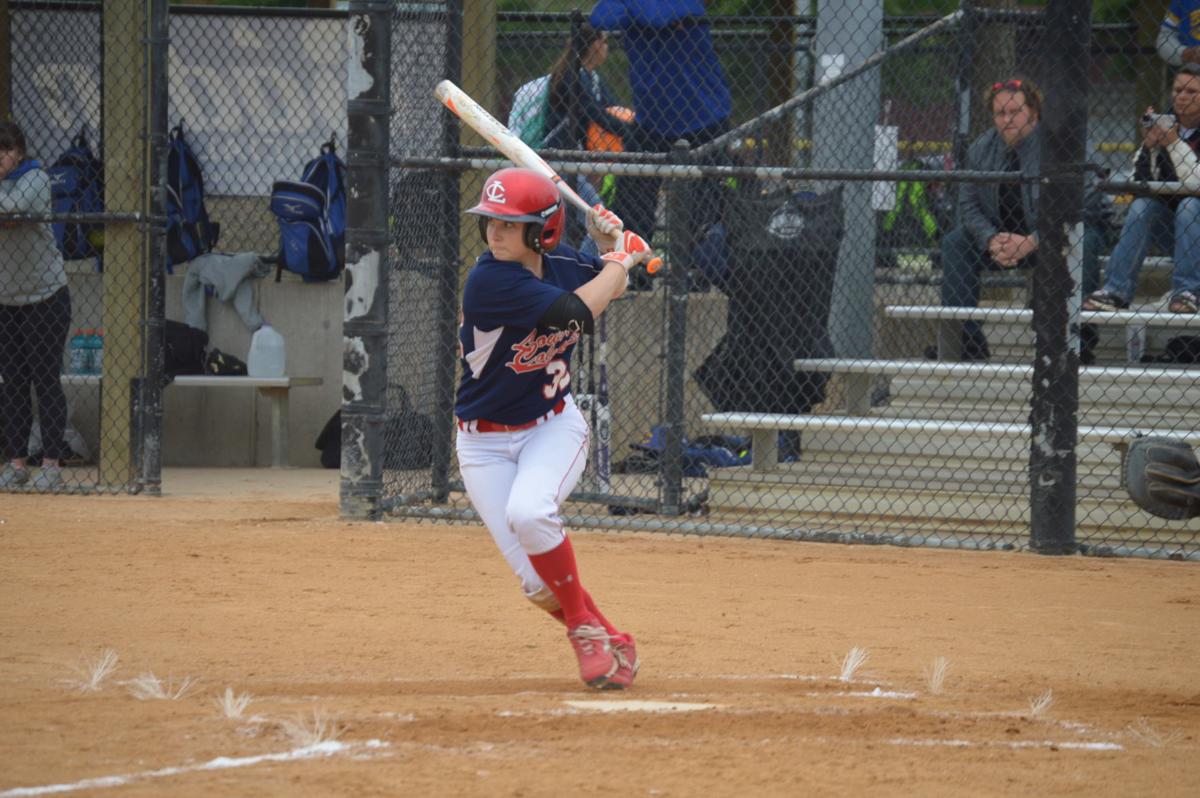 Nicole Bolasky (’15-16) hits at the NWAC tournament at Delta Park in Portland before the tournament was moved to Spokane. As a sophomore she set the NWAC record for stolen bases with 69. 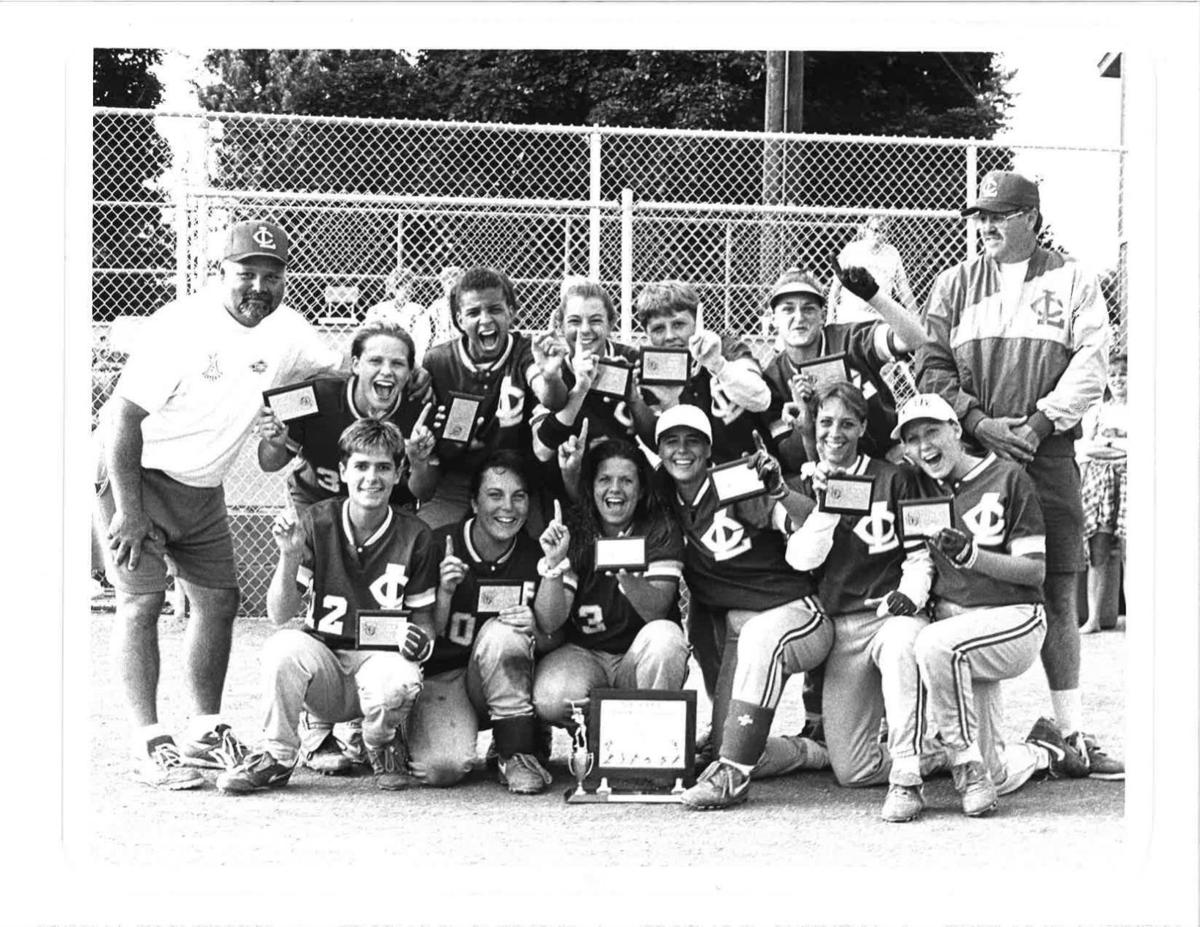 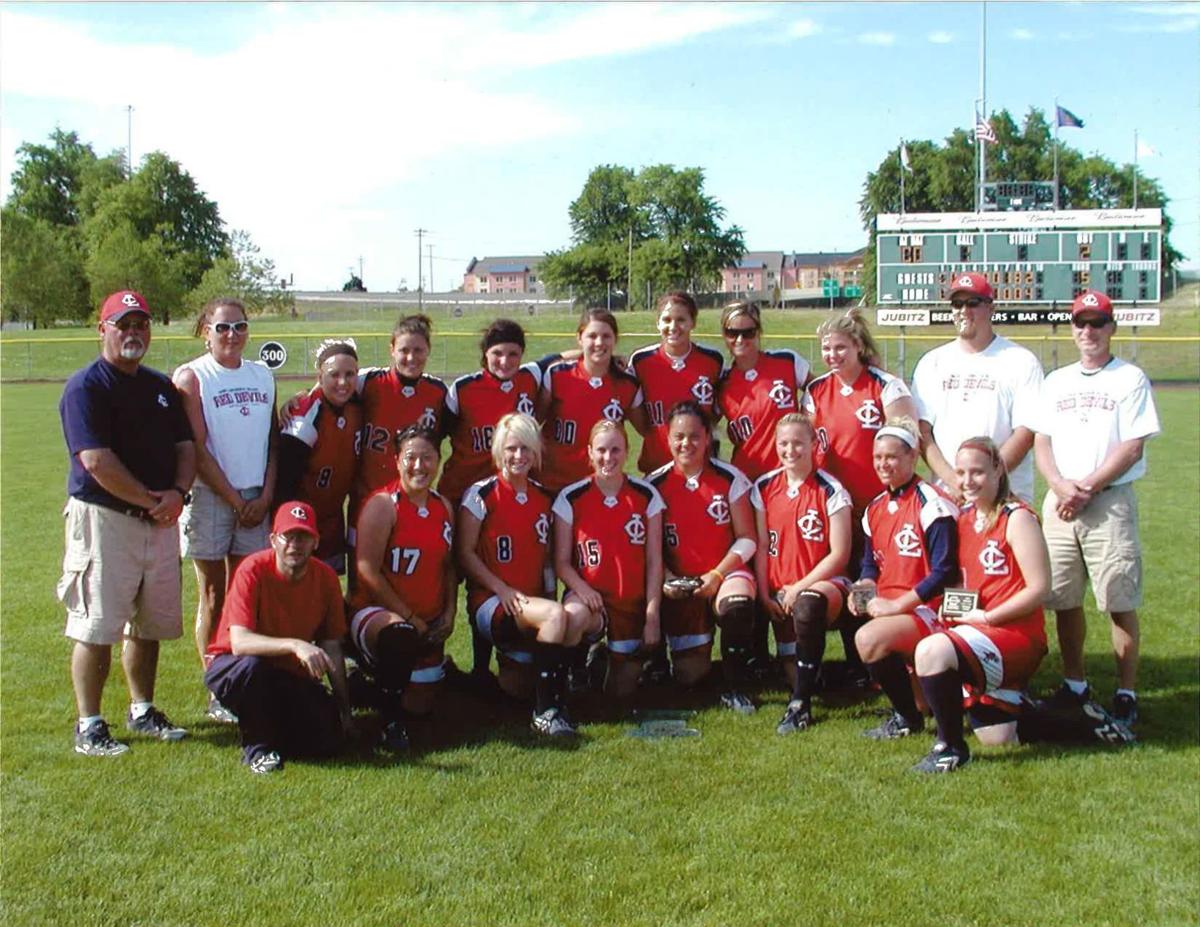 Lower Columbia College had the strange privilege of playing the last college softball game of the season this spring. It’s just not the game they wanted it to be.

While the Red Devils managed to split that season-ending date, the scourge of COVID-19 did away with the rest of the season for good immediately following the final out.

That unusual conclusion to the spring sports season brought an early end to the Red Devils’ quest to get back to Spokane for another spin in the NWAC softball tournament. While no road to the Lilac City is guaranteed, LCC has managed to navigate its way to the championship tournament in 28 of the past 30 seasons.

Given the roster the Red Devils boasted this season, it’s unlikely that they would have fallen short of that goal this time around. Their success was going to start with a veteran crew who established lofty expectations early on.

According to Saydie Harris, new players are informed of the goal to get to Spokane in short order upon their arrival in The Squirrel City.

“As soon as the freshmen come in they know what to do they know their job. The sophomores just tell them how it’s going to be,” Harris explained.

After six months of practice and a short stint of regular season games on the dirty diamond, Harris believed that this year’s squad had what it takes to make a name for themselves on the NWAC’s biggest stage.

“I was really excited. We had a really good group this year. I personally believe that we would have been a top-five team, for sure,” Harris said. “We had great defense. We had really good hitting, it was probably our best strength this year. We had a lot of talented freshmen come in who were really smart and know the game.”

Trinity Naugle, the team’s ace hurler, had the same feeling as Harris burning in her gut.

“I think this year we had a lot more stronger bats. We had a few bigger girls who were known for hitting the ball super hard,” Naugle noted. “We were great last year, but we had really great defense and really great hitters this year.”

The Red Devils considered teams like Mt. Hood, SWOCC, Walla Walla, Clackamas, and North Idaho to be their top competition this season. But at this point, that’s all conjecture.

LCC softball played North Idaho, the two-time defending champions, for a title back in 2018. They also made the title game in 2012 but fell to Clackamas that year. The last time the Red Devils won a softball title was in 2008 when they capped a three-peat under former coach Tim Mackin.

That was far from Mackin’s first taste of success with the Devils. In fact, LCC qualified for the tournament in each year of Mackin’s lengthy tenure. Those trips to the NWAC tournament included a runner-up finish in 1993, a championship in 1994 and a run of six straight titles from 1999 to 2004.

“Under Tim’s time there they won nine championships in 10 years. They had one year in there where LCC won the tournament on a walk-off grand slam,” noted current LCC assistant coach, Dave Andrew.

The biggest change to the tournament in recent years was its switch from Delta Park in Portland to Spokane in 2017. That move came with pros and cons for a team from Southwest Washington that likes to book their hotel and travel arrangements early.

“For us, having it close to home was great. We’d have a lot of our fans at the games at Delta Park, so we missed that. But there was kind of an excitement level about going away. The Dwight Merkel complex in Spokane is really nice too,” Andrew said. “Ya it’s a long bus ride, but the kids really like to get out of town too.”

The players seem to agree with the assessment of their gregarious coach of many hats.

“I like the trip. I think it’s fun because we’re all on the bus so it’s six or seven hours of all of us just talking,” Naugle said. “Plus we all get dressed on the bus for the NWAC banquet and we do each other’s hair and makeup, so that’s a lot of fun.”

However, it’s the pressure-cooker atmosphere on the field that gets the competitive juices going.

“I talked a lot about how it puts the pressure on you because it’s the time you want to shine,” Naugle added. “It really shows how good of a player you are when you can work through that pressure and still find a way to win a game.”

Harris came away with the same impressions last season after helping LCC to a top-eight finish in the NWAC tournament.

“It’s really cool to be over there and know that you are one of the best teams in the NWAC and to have the opportunity to play for a championship,” Harris said. “You have this big complex with a lot of teams and you know the teams are good or they wouldn’t be there. You’re really eager to just get there and put on your cleats and play to the best of your ability.”

Although it’s been a few years since the Red Devils were crowned champions that doesn’t mean they haven’t played in big games recently and felt the pressure amplify as teams in the tournament dwindle.

“Playing for a championship in 2018 was great. We had to fight back through the loser’s bracket just to get to the championship game,” Andrew said. “That was a very hard working team that 2018 team. Kind of a bunch of overachievers.”

This year’s group of Red Devils aren’t yet sure how to feel about the way things went down this season. They aren’t overachievers. They aren’t underachievers. After just ten games and an unceremonious goodbye, they are sort of like the Moonlight Graham of LCC softball teams – They had the talent. They put in the work. They loved the game. But they never got their opportunity to stomp chalk in the batter’s box or dig a toe into the pitching rubber the way that they deserved.

For Naugle, who is hanging up her cleats in favor of a teacher’s life, this year was her last hurrah with a game that’s taken her many places over the years.

“I think we were going to be even better than last year with the talent that we had. It’s just a shame that we didn’t get to play the rest of the season,” Naugle said.

Harris, and the rest of the diamond Devils felt that way, too.

“It was heartbreaking for sure. I was very upset. We put in a lot of work. We had fall ball where we were looking really good and everyone was always putting in 100 percent in every workout. And all the weight training, getting up early, and putting in the work in school to make sure we could still play. It sucked. We had everything taken away so fast,” Harris explained.

Next year Harris will return for a third year sporting blue and red thanks to a special exemption for sophomores who lost their last chance to play due to the spread of COVID-19. As a veteran with a little extra seasoning she plans to pick up right where things left off as soon as she is able.

“I have the same expectation as this year. I still believe that we’ll be able to compete over there in Spokane for a championship,” Harris said. ‘I’m really excited. I can’t wait until fall comes if we’re able to play by then.”

The Northwest Athletic Conference board of directors voted Wednesday to drastically alter the upcoming athletic calendar, reducing all schedul…

The Dentists continued their close shave winning ways with a 5-4 win over the Reno Athletics here at Twin Falls High School in Idaho on Friday.

Hilander Dental gets bucked by hosts at Cowboy Classic

The Cascade Collegiate League will have its 2020 season after all.

Rural Baseball Inc. earned its first home victory of the summer with a 17-8 drubbing of the Camas Shredders in Senior Babe Ruth baseball actio…

The NFL plans to play the Black national anthem before Week 1 games. Hear the anthem here.

Additionally, the league is working collaboratively with players to recognize victims of systemic racism throughout the season.

The Peppers proved to be too hot for PAC-Tech here in Winlock on Saturday. With the help of a dozen hits the team from Selah handed the Lower …

Hilander Dental made the most of their first “home games” of the summer here in Astoria on Sunday as they dispatched Rural Baseball Inc. with …

Nicole Bolasky (’15-16) hits at the NWAC tournament at Delta Park in Portland before the tournament was moved to Spokane. As a sophomore she set the NWAC record for stolen bases with 69.