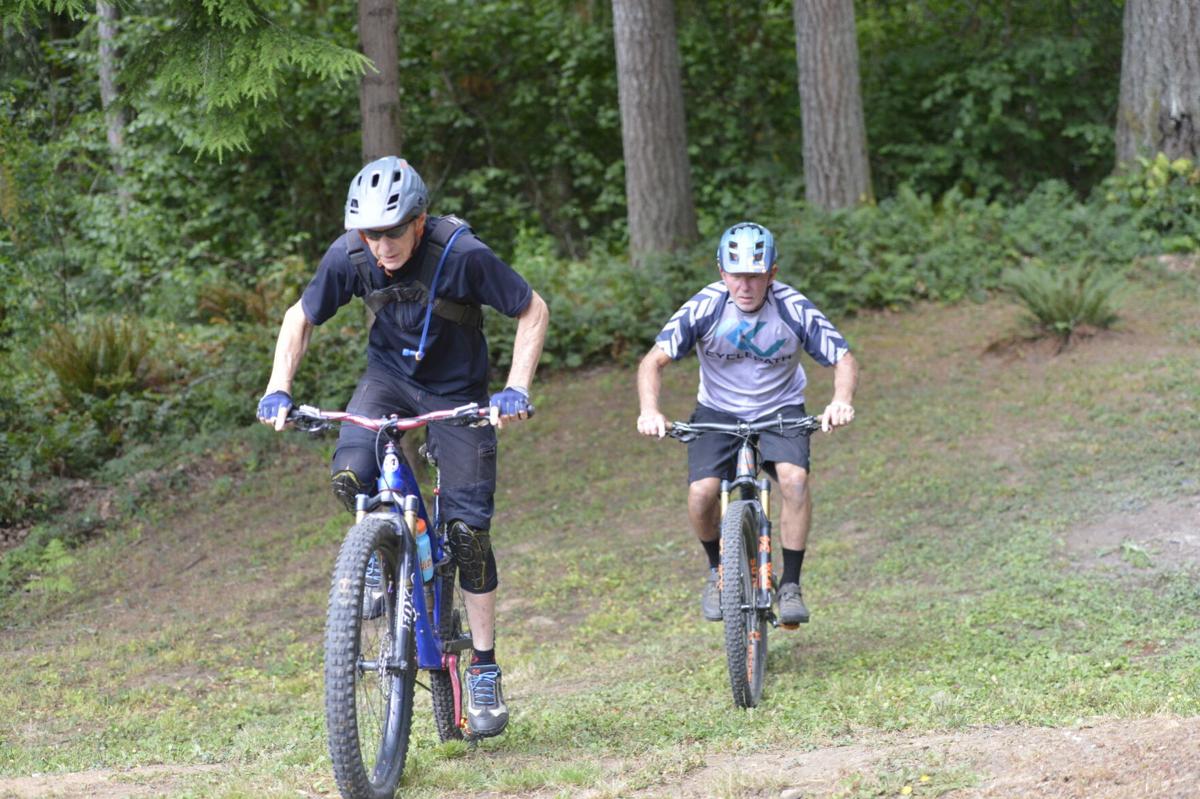 Bob Horness (left) and Jim LeMonds (right) ride their bikes on LeMonds' property in Castle Rock. The duo, who both turn 71 in August, have been preparing for a 71-mile ride for the past two years. 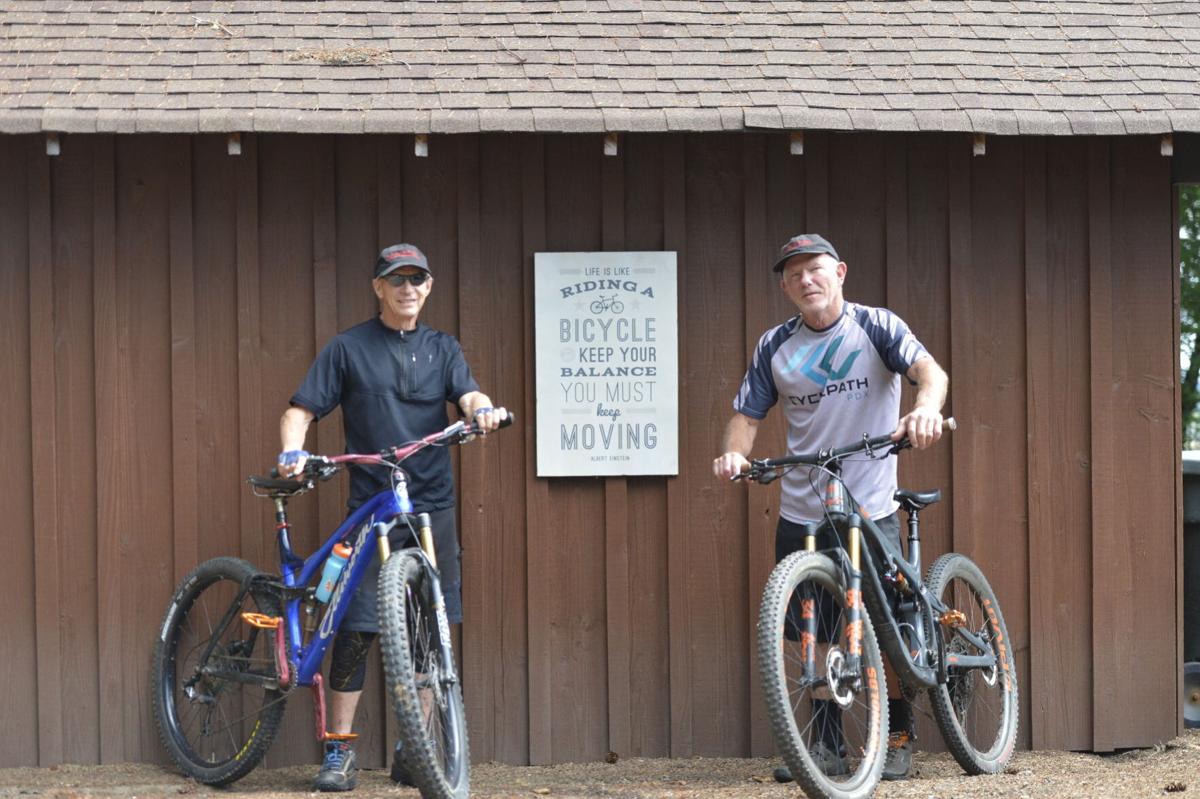 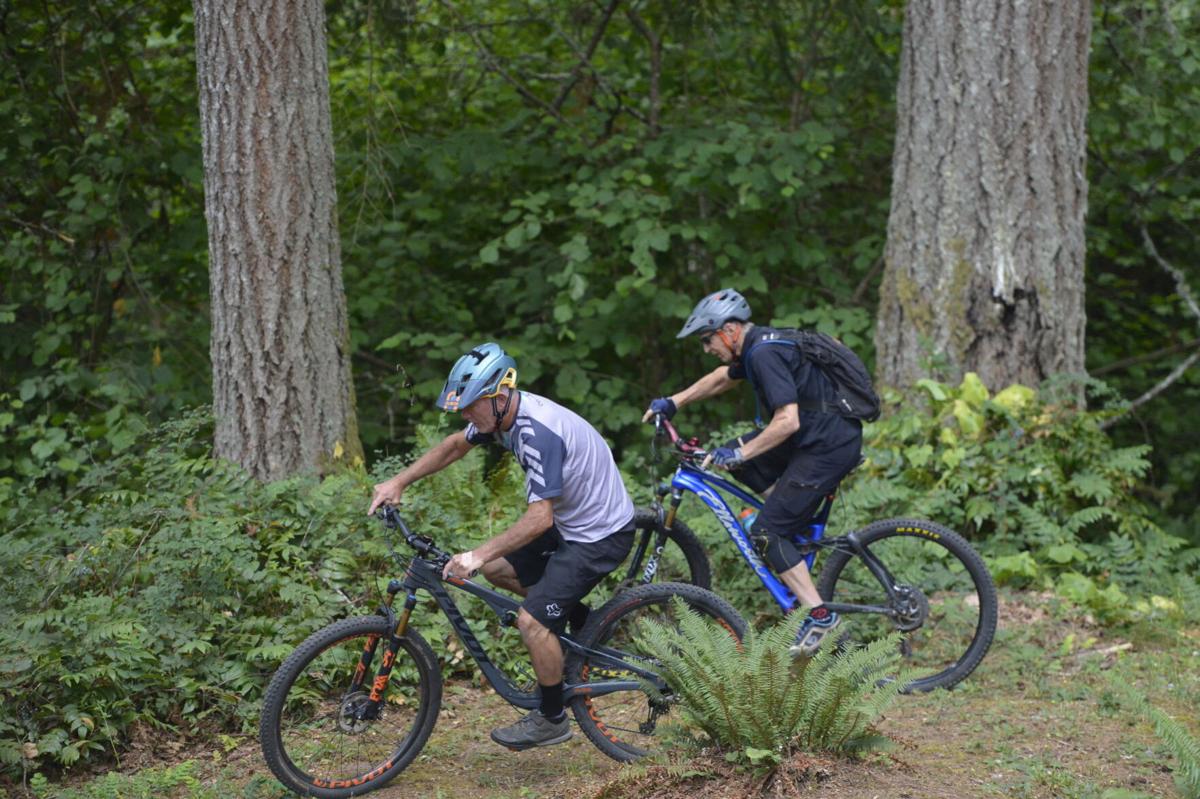 Time is undefeated and it always will be. People can try their best to combat it and hold off aging for as long as possible, but time catches up to everyone eventually.

Jim LeMonds and Bob Horness are two of those people that are fighting off the inevitability of time, and for the time being, they’re winning. LeMonds and Horness both turn 71 in August. To celebrate — or perhaps to deny the fact that they are aging at all — they are embarking on a 71-mile mountain bike ride across rough terrain and multiple locations.

The ride, which starts at midnight Friday morning, isn’t the first time LeMonds has taken to his bike to celebrate a milestone. He celebrated both his 50th and 60th birthdays with rides as well. This time, he adds Horness to his team.

“It started here with Bob and me having a beer after a ride, which, when you’re doing that, it always makes it easy to talk about big things that maybe aren’t achievable,” LeMonds said with a laugh.

The original plan was to do the ride last year for their 70th birthdays, but the logistics of planning a ride like that and getting the people in place to help was too difficult during the COVID-19 pandemic.

The ride isn’t just for LeMonds and Horness to prove that they aren’t the average 71-year-olds; they are also embarking on this journey to raise money for causes that have special meaning to each of them.

Mountain biking is a hobby — more like a passion — that LeMonds and Horness both picked up later in life. Both riders estimate they started their biking journey around age 45. Since then, the duo has continued to ride and found people their age to ride along with.

The group that LeMonds and Horness typically bike with carries around 15-20 people, however their extended biking network spans to more than 100 riders.

“You tend to gravitate toward likeminded people,” LeMonds said. “So regardless of age, all the way down to the young dudes, these are all people who are interested in fitness and aren’t afraid of getting dirty.”

LeMonds said that biking is a good way to keep that athletic edge for competitors into older ages and that he believes he’s actually in better physical shape now than he was at age 50.

“If you’ve always been in athletics, how long are you going to play rec basketball?” he said.

But that doesn’t mean it’s for the faint of heart.

“Mountain biking is an extremely difficult sport,” LeMonds said. “Either you stay in shape or you just aren’t capable of riding, especially with the guys we hang out with.”

Horness, a retired Clatskanie resident who worked as the maintenance supervisor of the Clatskanie and Knappa school districts, agreed and mentioned the rude awakening he had when he first picked up biking before he got his “biking legs.”

“I tried it and I was in the best shape of my life, and those guys just biked away from me and disappeared,” he recalled.

Despite the difficulty, LeMonds and Horness have encouraged and inspired people to pay more attention to their fitness and find ways to stay active in their later years.

“It doesn’t have to be doing this,” LeMonds said. “Just maybe do more than you’re doing. Maybe think about fitness a little more.”

However, those that are interested in biking should be prepared. It doesn’t come without its bumps and bruises; both have taken falls and LeMonds has suffered multiple broken bones and collapsed lungs due to some ill-timed crashes during rides. Horness has been more fortunate to avoid some of those injuries as “a great tuck-and-roll guy,” according to LeMonds.

“We’re really fortunate to have our good health,” Horness said. “So part of this is to tell people that doing something extraordinarily difficult is something you can look forward to.”

But again, LeMonds cautioned that it takes some time to adjust to riding at a high level.

“We don’t consider ourselves elite athletes, but we’re also not average old dudes,” he said. “It’s just what you can do within your own capacity to stay fit.”

The ride itself is no small task. LeMonds has made longer road rides and training rides, but it’s the difficult terrain that will be the main challenge for them on the journey.

“All our mountain biking friends who know about this ride, their eyes go up, because they understand the degree of difficulty,” LeMonds said.

For Horness, this will be the longest ride he’s ever attempted.

Altogether, the trek will be made in three legs and they estimated it to take around 13-15 hours to complete the 71-mile ride.

LeMonds and Horness have been training for their ride for two years, but that doesn’t make completion a certainty. They give themselves a 60-40 chance at completing the ride — 60% they make it, 40% they fail.

“The amount of suffering we’re talking about here is extreme,” LeMonds said.

However, with their motivation and purpose for the ride in mind, their prepared for the strain.

“Our suffering will pale in comparison to those who we’re dedicating the ride to,” Horness said.

The first leg of the ride begins at Marble Mountain Sno Park near Cougar and will run along the Ape Canyon trail before they loop back around and finish back at Marble Mountain. The first leg will be around 30.5 mile and will gain around 5,400 feet in elevation. They estimate the opening leg will take seven to eight hours. Since they begin at midnight, they will use lights to guide their path, adding yet another challenge to the difficult terrain they are already encountering.

LeMonds and Horness will then hop in a van and get a breather as they take an hour-long drive to the second leg of their ride along the Lewis River. The leg starts at Curly Creek and will continue to Lower Falls before they head back to where they started. The second leg is around 22.5 miles and involves 2,250 feet of climbing. The estimated completion time is five hours. Although it isn’t the longest part of the ride, LeMonds said this will be the most challenging and if they fail, it will happen on this leg due to the tough intervals.

After that, they’ll hop in the van once more and take a short, 25-minute drive to Falls Creek for the final leg of the journey. The shortest of the bunch, this leg is 17.1 miles with a 1,250 foot climb. They estimate the final leg with take just 2.5 hours to complete.

Throughout the ride, LeMonds and Horness will take 2-minute breaks every hour to refuel and rehydrate. They will have plenty of support and assistance along the way as fellow riders will be working with them to help them pace themselves and will also carry food, water and spare parts. A mechanic will also join them on the majority of the ride in case either of their bikes need repairs. A registered nurse will also be part of the travelling party to keep tabs on the riders and ensure their health.

They expect a challenge, but both LeMonds and Horness have hats that are emblazoned with the sly phrase “If it were easy any idiots could do it.” An inside joke that started between the two when they were working on building trails.

LeMonds expects this ride to be the last hurrah of sorts, as it will likely be the last time he attempts a ride like this.

How to help the cause

The duo has selected five preferred charities for donations. The Pancratic Cancer Action Network and the Leukemia Research Foundation are two of those charities that directly relate to those that the ride is dedicated to. They have also selected the Fisher Center for Alzheimer’s Research, the Clatskanie Senior Center and the Friends of the Castle Rock Library as other preferred options.

Donations can be made through LeMonds’ website at writeteknorthwest.com.

Bob Horness (left) and Jim LeMonds (right) ride their bikes on LeMonds' property in Castle Rock. The duo, who both turn 71 in August, have been preparing for a 71-mile ride for the past two years.