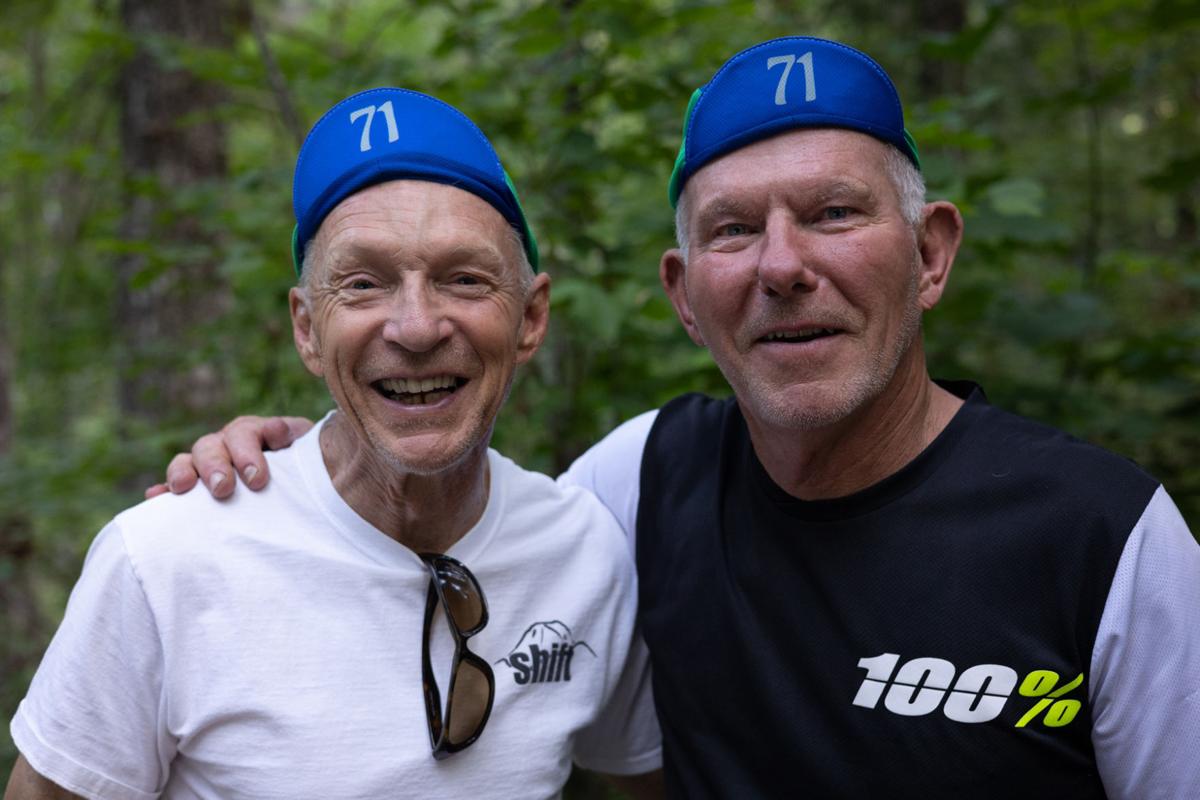 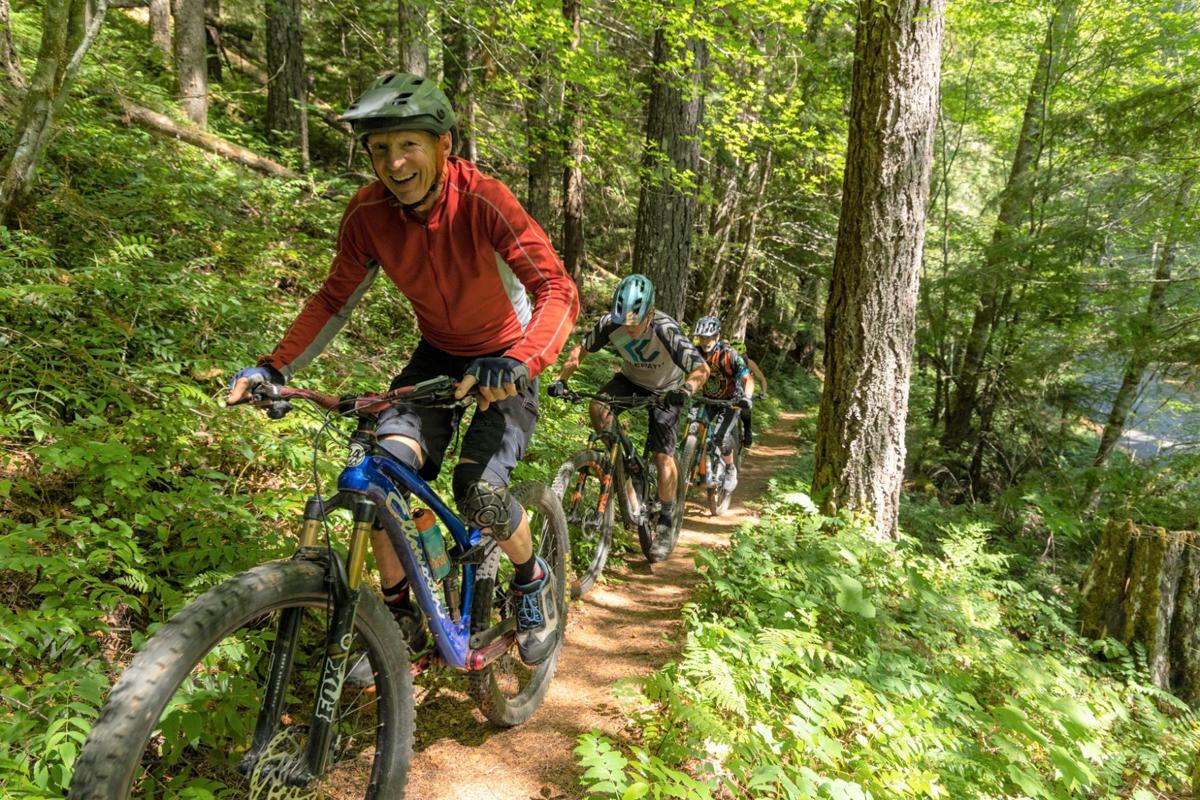 Bob Horness, front, leads a group of riders while Jim LeMonds follows during their 71-mile ride in celebration of their upcoming 71st birthdays. 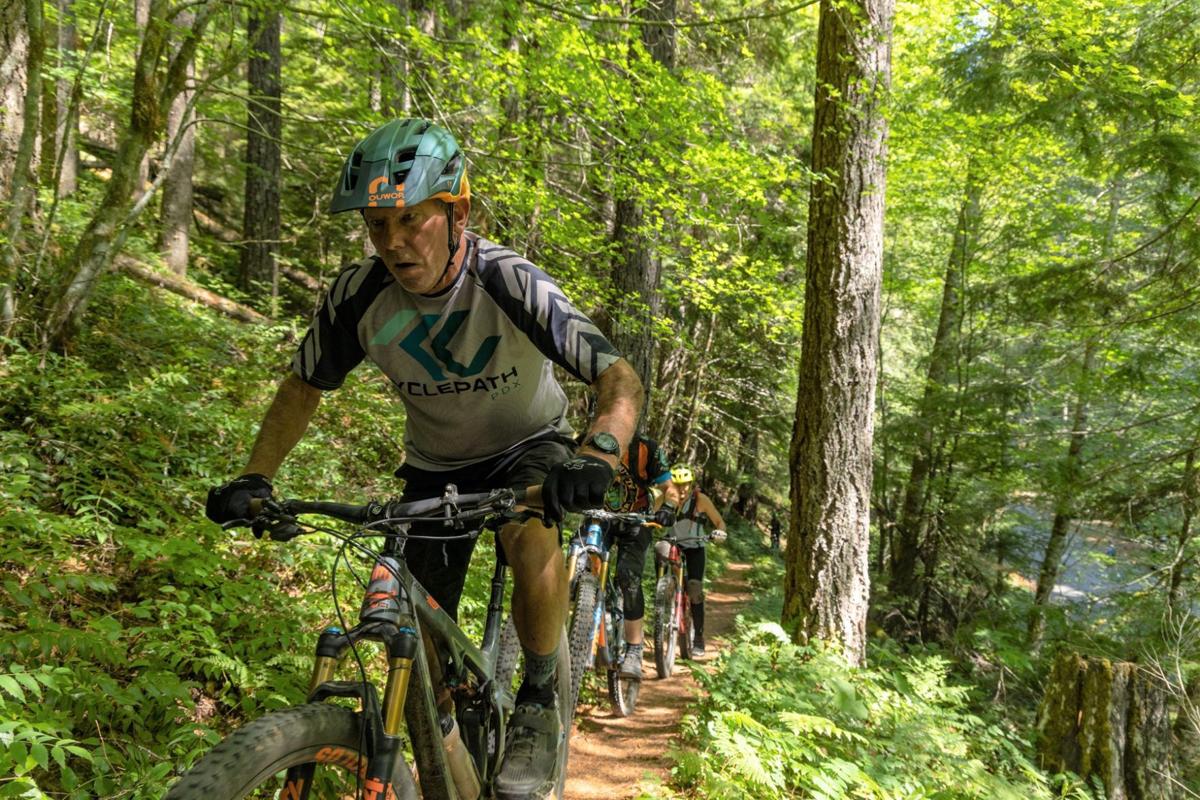 Jim LeMonds, front, leads fellow riders as he aims to finish the final leg of a 71-mile ride to celebrate his upcoming 71st birthday near Falls Creek. 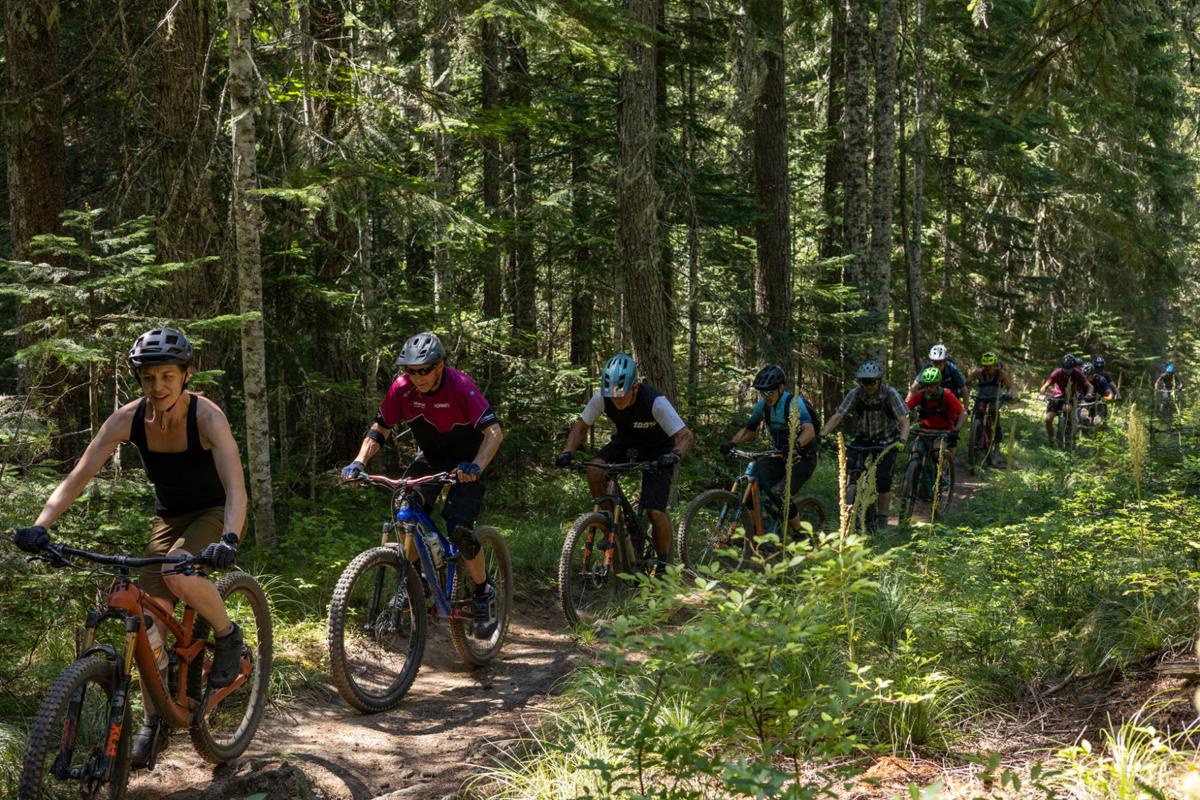 Bob Horness and Jim LeMonds (second and third in line) follow pacer Kim McCormack during the final leg of their 71 at 71 ride near Falls Creek.

When Jim LeMonds and Bob Horness finally laid down and closed their eyes Friday night, they deserved every wink of sleep they could get. Over the previous 24 hours, the pair, who both turn 71 next month, had traversed 71 miles of rough terrain that gained over 9,500 feet in elevation and took nearly 13 hours of riding to complete.

The 71 at 71 ride to celebrate their upcoming birthdays was a challenge that neither man was certain they could match. Before the ride, they gave themselves a 60 percent chance of finishing, which left a significant margin for error. But once they were on the trail, it seems finishing was just about the only choice.

“We were going to finish unless we had a catastrophic wreck or cramping would have really put a dent in it,” LeMonds said.

The two gathered at Marble Mountain near Cougar to start the ride at midnight on Friday morning. They loaded up with lights on their bikes and their ride crew and took off on the trail. A full moon and a clear sky helped set the stage and light the way whenever it could shine between the branches of the trees.

“It was spectacular,” LeMonds said. “It was a full moon night and that helped a little bit.”

The scene was even emotional for LeMonds, as he was appreciative of all those that were helping him and Horness complete the ride.

“I thought I was going to break down when we started because everybody was in the parking lot hugging and stuff and getting ready to roll out of Marble,” he said.

But LeMonds, who lives in Castle Rock, held things together as the moonlight eased the opening leg of the ride by enhancing the surroundings and occasionally gave the riders a chance to slow down and enjoy the views.

“There were the most spectacular sights I think I’ve ever seen,” Horness said.

The moonlight helped, but there was still some early trouble when LeMond’s handlebar headlight and headlamp both went out near the end of the trail. Luckily, the light from one of the guides was enough to keep the crew moving.

LeMonds and Horness had pacers to ensure they wouldn’t let the adrenaline get the best of them and cause them to overexert themselves too early in the trek.

The riders watched as the sun started to creep up and illuminate the mountain, adding ambiance to an already stunning morning.

LeMonds, Horness and crew finished the 30.5-mile opening leg in 6 hours and 45 minutes, just under their 7-hour estimate. They then loaded up and headed off by car to the next leg of the trip beginning at Curly Creek near the Lewis River.

That second trail gave LeMonds the biggest challenge of the ride. Going into the adventure, he had said that if they were to fail, it would likely happen there.

“My God, the middle part of that trail is just brutal climbing,” he said.

But the team kept moving. They weren’t setting any records for speed, but they weren’t trying to. The lone goal was to finish.

Not every rider that was there to support LeMonds and Horness took on the challenge of the second leg, but they made sure to help the pair get through it. At one point, as they crossed a road on the trail LeMonds heard cheers erupt as they pulled up on the rest of their group for a pit stop.

“One of my big memories is all 15 members of the ride team who weren’t doing that leg had driven up there to wait for us and they were cheering for us when we came across the road,” LeMonds said.

Both riders agreed that time with the crew was among the highlights. Accordingly, they took their longest break of the ride at that stop, resting for about 35 minutes as they sat down and rehydrated and refueled while fellow rider Kim McCormack did a health check to ensure LeMonds and Horness were holding up to the strain. Other members of the ride crew inspected their bikes to make sure they were ready to go once they picked back up.

The second leg took just about all of the five hours that were expected for the 22.5 miles of trail before they took a short ride to the start the third leg of the journey at Falls Creek.

But the middle section of the path wasn’t without a minor scare. LeMonds misread the trail as they encountered a switchback and got his front tire folded up, which in turn sent LeMonds off his bike and over the handlebars.

“I landed on my left shoulder and my head and it just kind of rang my bell for a little bit,” LeMonds said.

Despite the scare, he was back on the trail in no time and given the green light to keep riding after a quick check up. Horness managed to keep his balance for the entirety of the ride, but mentioned that there were a few close calls.

After the tough second leg, it was Horness, who hails from Clatskanie, Oregon, who said he struggled most with the third.

“Once we started our third leg to Falls Creek, the climbs up were difficult,” Horness said. “It had gullies with roots and rocks in it. That was pretty difficult because we were pretty worn out by then.”

The duo kept grinding to push through the exhaustion. Both were certain that without the training they had done over the last two years, it wouldn’t have been possible to finish their quest.

“I’ve got to admit, I think our training paid off,” Horness said. “I don’t think we could’ve done it without our training.”

The final leg featured the largest group of fellow riders joining them in part to celebrate as they closed in on the finish line. But they were sure not to overdo it too soon after the hard mileage they had already endured.

“Bob and I were gassed, so Kim, who was pacing us, was making sure we were taking a lot of breaks and she had the pace dialed way back,” LeMonds said.

Once they reached the end of the final trail, the emotions of the accomplishment began to sink in.

“I started having problems keeping myself under control when we pulled in, LeMonds said.

They celebrated the finish at the end of the trail, but made their way a few miles down the road to Mustang Camp where around 50 people celebrated LeMonds and Horness at an after party.

“The support people were all out there cheering us on and that just meant a whole lot to us,” Horness said.

The celebration ensued, but not just for the feat of finishing the ride. LeMonds and Horness have collectively helped raise around $33,000 for charities that include the Pancreatic Cancer Action Network and the Leukemia Research Foundation. Those charities were chosen to reflect two individuals that LeMonds and Horness had dedicated the ride to.

For LeMonds, it was his friend and college roommate Mick Spane, who passed away in August 2020 after a fight with pancreatic cancer.

Horness chose to honor longtime friend Paul Schublin, who is currently battling leukemia and met Horness while they fought in Vietnam. Schublin was an attendee at the after party to help celebrate the accomplishment.

“That was an extra special part of this,” Horness said.

When all was finished, LeMonds said he finally got to sleep around midnight. He said he and Horness were expecting to hit a wall after the ride, but it never came. LeMonds estimated that he was awake for 41 consecutive hours by the time he laid down to rest.

Looking back, both riders tried to put the accomplishment into perspective.

“In my biking life, I think this is at the top of my list…this one was different,” LeMonds said. “Not just because of the aging challenges.”

“I’d rank this way up there in terms of effort,” he said. “That would be right at the top of the hardest things I’ve ever done.”

Both described the milestone ride as a special and fun experience, however they are split on whether or not another ride is in their future. This ride was initially planned to mark their 70th birthdays, but was delayed due to the pandemic. LeMonds doesn’t know yet what the next milestone birthday has in store.

“It would be almost anticlimactic,” he said. “I mean, are we really going to try to ride 75 or 80 miles of trail like this in a day?”

Horness on the other hand was more optimistic and intrigued by the idea of another ride.

“That was so much fun, that yeah, I’d like to do something like this again,” he said. “Just saying, I’m not going to take it out of the realm of things to do.”

Charitable donations will be accepted for the ride until the first week of August. More Information on how and where to donate can be found at writeteknorthwest.com

What to expect with Justin Fields at the helm

What to expect with Justin Fields at the helm

Bob Horness, front, leads a group of riders while Jim LeMonds follows during their 71-mile ride in celebration of their upcoming 71st birthdays.

Jim LeMonds, front, leads fellow riders as he aims to finish the final leg of a 71-mile ride to celebrate his upcoming 71st birthday near Falls Creek.

Bob Horness and Jim LeMonds (second and third in line) follow pacer Kim McCormack during the final leg of their 71 at 71 ride near Falls Creek.