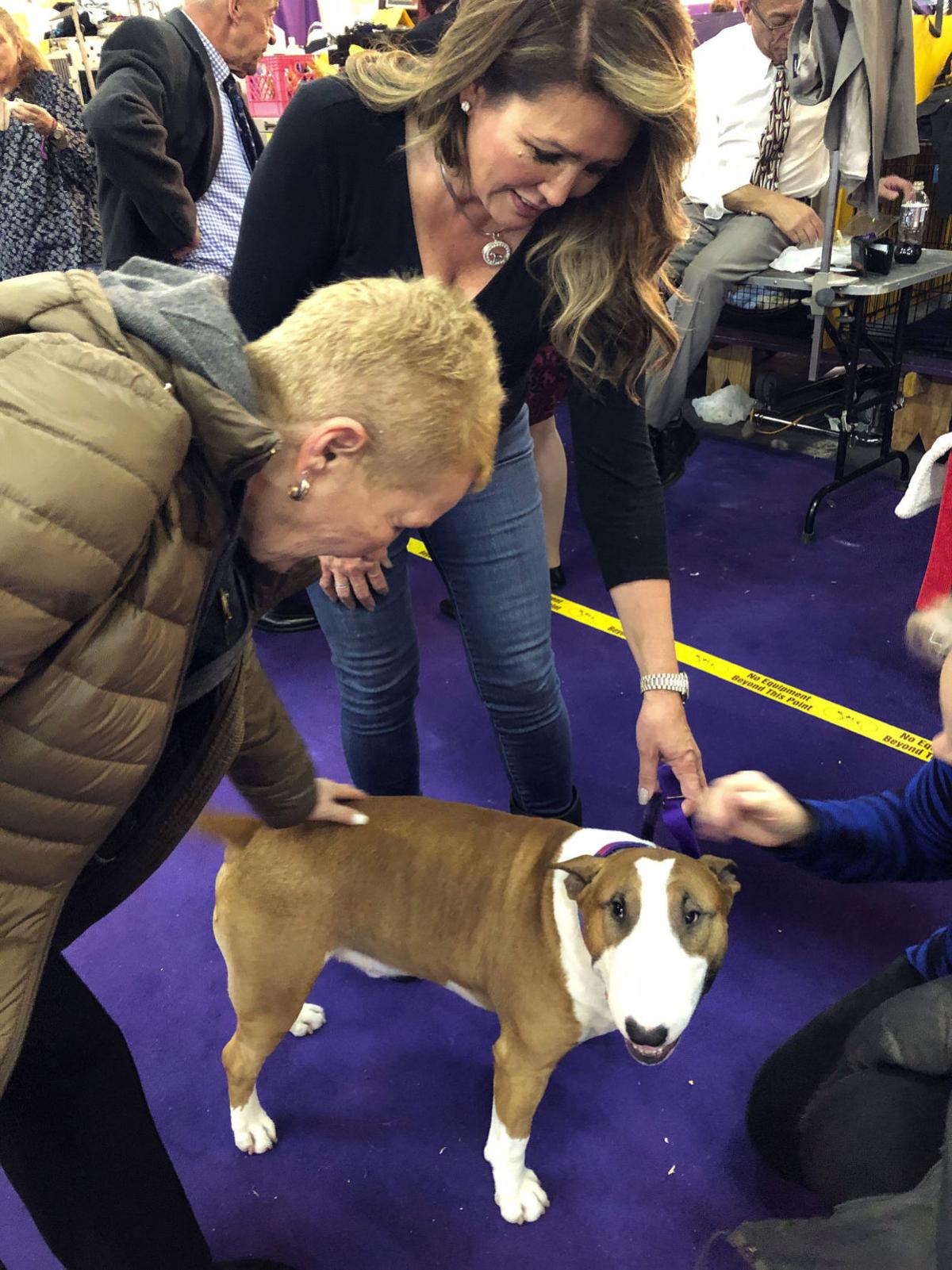 Vinny, a colored bull terrier, and owner and handler Grace Thomas of Napa, California (top center, in jeans), greet visitors after he won his breed at the Westminster Kennel Club dog show in New York on Monday. 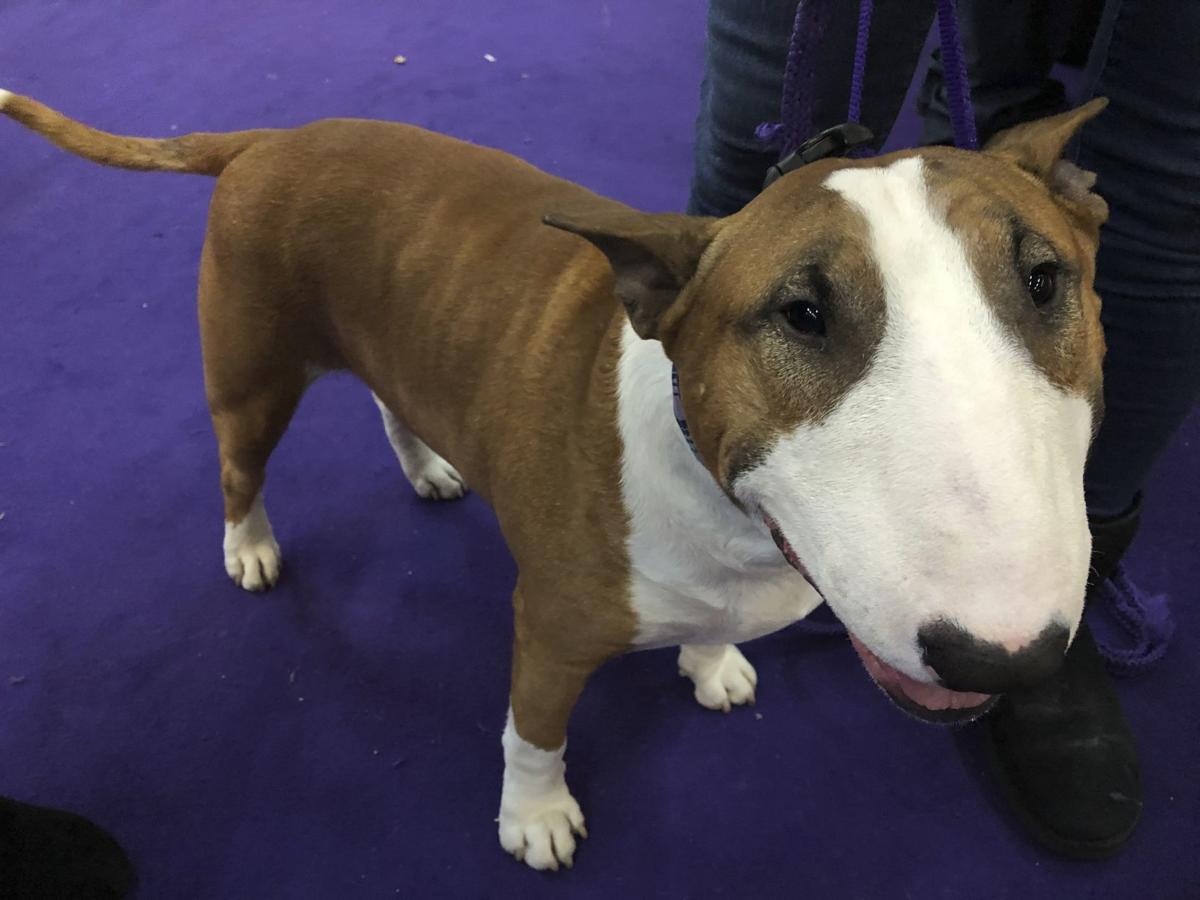 NEW YORK (AP) — It’s a love story that all starts with Spuds MacKenzie.

And this tale of puppy love — and human romance — gets a new chapter under the TV lights at the Westminster Kennel Club dog show Tuesday night. It’s the first time there for a bull terrier named Vinny with owner Grace Thomas handling him.

“I guess when you’re passionate about it, it works,” said Thomas, who’s among a minority of people showing their own dogs at Westminster who haven’t made a career of dog handling.

The gregarious Vinny was chosen Monday as best colored bull terrier (all-white ones show separately), an award he also won last year with a professional handler. He gets to try Tuesday night for top terrier, and if he succeeds, he’ll have a shot at the best in show crown.

The story goes like this: Thomas fell for bull terriers after seeing Spuds, the party animal of late-1980s Bud Light ads, but it was some time before she acquired one. When she eventually did, in 2001, the breeder pressed her to show the pup.

Thomas didn’t know what showing would entail, but she was game to try. So she watched, asked questions, learned the ropes.

“People think it’s all fun. It’s a lot of work,” said Thomas, of Napa, California. She said it takes lots of conditioning and bond-building to get a dog to sparkle in the show ring.

“Owner-handlers” are often overshadowed at Westminster by star professional handlers, some of whom started competing as children.

“It’s hard to have confidence when you go out there with a group of professionals, but you can do it,” Thomas says. “A lot of people feel that only professionals can win, and it’s not true. If you have a good dog, your dog’s going to win.”

For all the professionals’ polish and experience, she and some other owner-handlers feels they bring something of their own to the show ring: their dog.

“The ribbons are nice, but it’s the journey that you’re on with your dog,” Diana Gerba of Menlo Park, California, said Monday after showing her Tibetan spaniel, Marco, at Westminster. “The bond is really strong between him and me.”

Still, Thomas notes, there are other challenges — like juggling dog shows with a full-time job in human resources before her retirement last year. But her professional background helped a bit.

In H.R., she notes, “you have to learn to deal with all types of characters, and bull terriers are characters. And so are show people.”

One show person, Robert Thomas, became a particularly big part of her story.

“He fell in love with my dog,” she says.

Yes, “the dog came first,” she says with a laugh.

About a year after that 2015 show, the two started talking about dogs, “and it just grew from there,” Grace Thomas says. They married in 2018.

“I teased her, you know, ‘I only started dating you because I wanted your dog,’” her now-husband jokes. All kidding aside, he calls their relationship “the best thing that ever happened to me.”

Nearly three years ago, he gave her a puppy as a birthday present.

Seventeen games into her career at Southern Utah, Cherita Daugherty has already established herself as a leader and a weapon for the Thunderbirds.

Perhaps no women’s team in the Pac-12 has had it rougher this season than Oregon State.

The San Antonio Spurs are dealing with a coronavirus outbreak among four players, the NBA said Tuesday, meaning the team will not play until t…

HOMESTEAD, Fla. (AP) — After years of seeing a handful of drivers — the same guys, really — dominate NASCAR's top level nearly every week, the…

KANSAS CITY, Mo. (AP) — The Royals and third baseman Hunter Dozier have agreed to a $25 million, four-year contract that includes a fifth-year option, a person with knowledge of the agreement told The Associated Press on Sunday.

Vinny, a colored bull terrier, and owner and handler Grace Thomas of Napa, California (top center, in jeans), greet visitors after he won his breed at the Westminster Kennel Club dog show in New York on Monday.