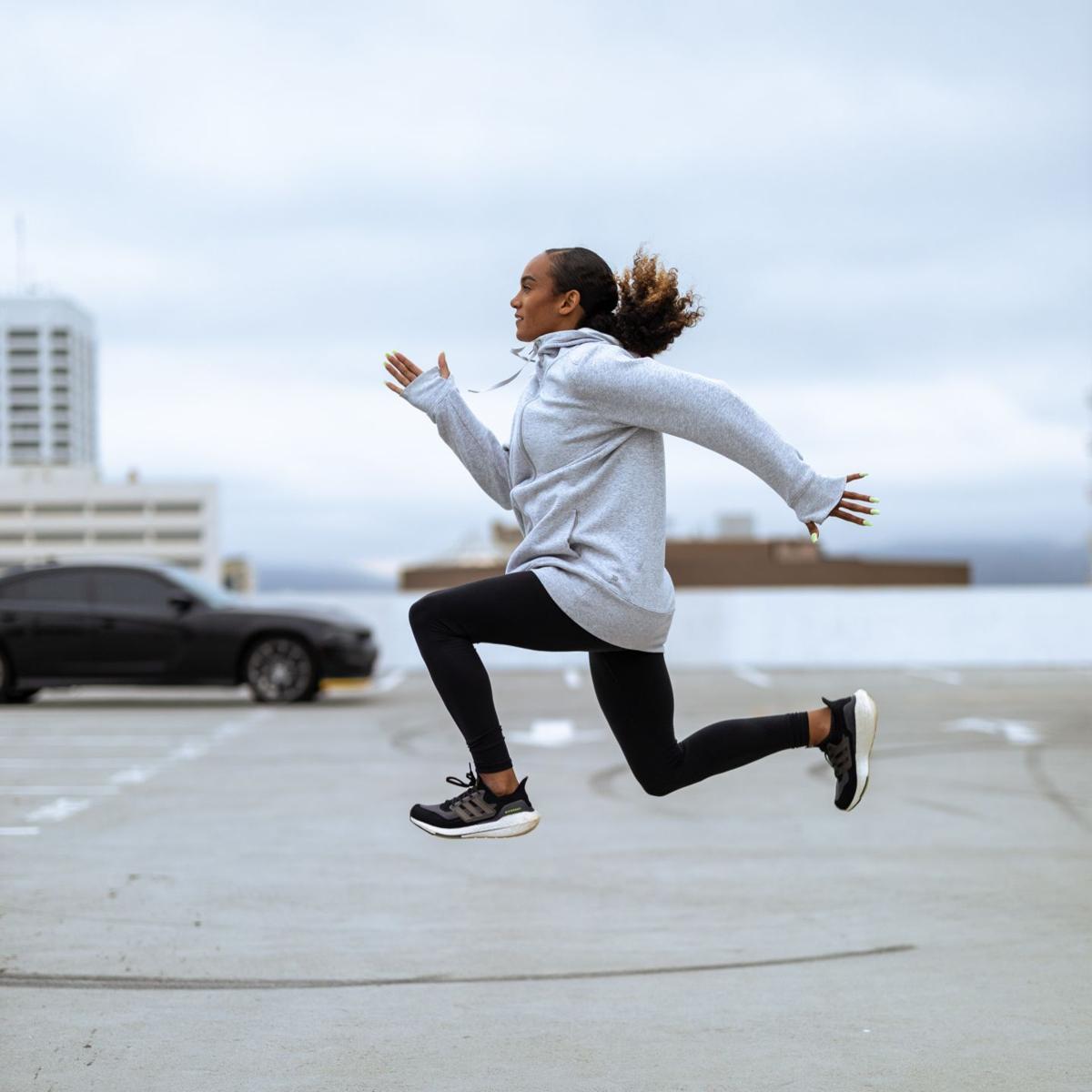 Kiana Davis practices her jumping form during a promo shoot. 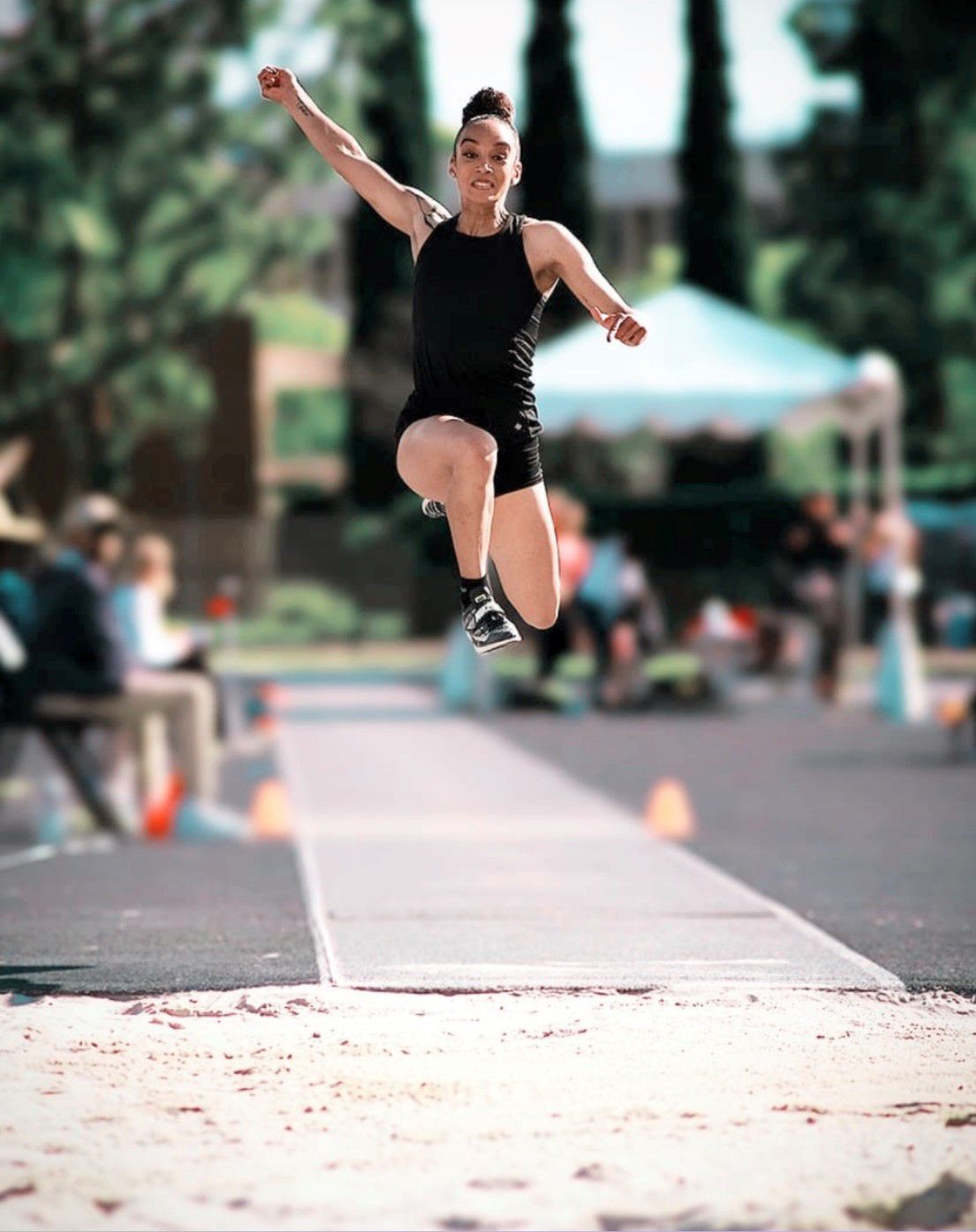 Kiana Davis competes in the triple jump during a competition at Long Beach State University in 2020.

Qualifying for the U.S. Olympic Trials would be a highlight on any track and field athlete’s resume. The hard work, dedication and skill that it takes to get there is something that few athletes around the country can do.

For Kelso High School grad Kiana Davis, her journey to competing at the Olympic Trials at Hayward Field in Eugene was more complicated than most.

Davis track journey started off like many. After graduating from Kelso in 2013, Davis chose to continue her track career at Vanguard University in Costa Mesa, Cali., before she returned to her home state to compete at Washington State University.

After completing her career at WSU, Davis chose to compete as a professional and opted to stick to indoor events. Following her first year as a pro, Davis’ path veered far from what would be considered conventional.

In 2018, shortly after competing at the USA Indoor Championships, Davis was back on WSU’s campus in Pullman when she slipped on a patch of ice and hit her head on a concrete ramp. After quickly getting up and brushing off the embarrassment of the fall, Davis noticed something wasn’t right.

“A few minutes after, I kind of realized that I didn’t remember how to drive,” she said. “A friend drove me home and by the time I got home I didn’t know where I was at.”

The problems didn’t disappear and more presented themselves, proving to Davis that it wasn’t a short term injury.

Davis had suffered a traumatic brain injury and would need two years to recover. She had to relearn multiple tasks that are taken for granted on a daily basis including motor skills and balance that are vital to an athlete’s success.

“It was just a really long recovery process regaining certain types of movement,” she said.

The recovery process took patience, but Davis said she was fortunate to have support from her family as well as from her community back home.

Today Davis still has residual impacts from the injury, including issues with her hearing and balance, but that didn’t stop her from setting a goal to compete for a chance at the Olympics. In preparation, Davis turned her focus to jumping events, with a focus on the triple jump in particular.

Davis’ road back to competition wasn’t without its own obstacles as the COVID-19 pandemic had shut down running and jumping sports just like so many other events. Davis’ coach and trainer Greg Magee said finding facilities to train at was a challenge. They had to rotate between multiple schools and occasionally sneak their way onto high quality track’s to compete. Davis didn’t even get a chance to train in an actual sand pit until about two months before the trials, Magee said.

Despite the setbacks, Magee noted Davis’ high motor from the start.

“She was always determined,” Magee said. “She always was an overachiever, she always wanted to work harder no matter what I put in front of her.”

Davis was glued to the track to the point where Magee had to pry her away at times.

“Her determination was beyond compare,” he said. “I had to say ‘You know, it’s time to go, you’re pushing yourself too much.’”

There were plenty of other things for Davis to figure out. At the beginning of the year, she switched her jump leg and competed that way, but shortly before the trials, she switched back to her normal jump leg.

“It’s really been a trial season of just figuring out where I’m at, what I need to work on, what are my strengths and weaknesses,” she said.

After making the switch, Davis met her goal of qualifying for the trials just a week before they took place. Davis also set a personal best in the process as she jumped 43 feet, 3 inches to qualify. She was impressed at her own success given where she’s been at in her training process.

“Most people aren’t trying to figure out which leg they’re going to jump on at this point in their career,” she said.

Magee himself was surprised by how much Davis was able to improve throughout the process.

“I was totally shocked,” he said. “I truly didn’t believe she could make it, I’m going to be honest, because of what she told me that happened to her.”

But Magee said that Davis “felt that it was basically part of her destiny” to qualify for the trials.

Davis, who has relocated to the Los Angeles area, was able to take a trip back to the Pacific Northwest for the Olympic trials at Hayward Field on the campus of the University of Oregon.

After the long journey to get there, it took time to sink in and appreciate where she was competing, and that it was happening at all.

“I was there, I was taking it all in, but I didn’t really actually feel like I was there,” she said. “That’s the first time I’ve ever not really been stressed at a track meet.”

After Davis’ “surreal experience,” she struggled with her first two jumps of the first round, but she kicked it into gear with her last jump of 43’1” which catapulted her into 12th place and qualified her for the final round.

“I was in tears as soon as they put my mark up. Super exciting, wasn’t expecting to go that far, especially to go to finals,” she said.

Davis ended up finishing 12th overall, nine spots away from making the Olympic roster, but the obstacles she had to overcome to get there made even that disappointment worth the wait.

Davis’ success story isn’t ready to be finished just yet. She has her eyes set on competing at other big events in the future. She said she hopes to continue to improve upon her personal best throughout the summer and has her eyes on competing in the World Championships in 2022.

“We know I can jump so much further…even the day I hit my lifetime best, it felt like a really off day for me,” Davis said.

Davis added that she’s excited about the opportunity to see how she can continue to progress. She described herself as being at the foundational level of a premier track athlete, meaning she has a lot of room to improve and refine her skills in order to accomplish her goals.

Ever the competitor, Davis was very quick to confirm that she has her eyes on the 2024 Olympics as a major long-term goal.

Davis’ journey has been unconventional to say the least, but she wants her legacy as a competitor to have a much more straight forward message.

“I really want my track career to be something that younger athletes or other people can look at and be like ‘Hey, I can do whatever I set my mind to do,’” she said.

According to Magee, Davis’ story is already inspiring some of the younger athletes he coaches.

“She would sit there and talk with them and tell them her story…and these kids were amazed at her,” Magee said.

Moreover, he added that Davis would make a great coach someday if she so desires.

Get the latest in your inbox!

We're delivering updates and highlights on the Summer Olympics daily to your inbox, including What to Watch, live coverage, schedules and medal counts.

Simone Biles says she withdrew from final to protect team, self; plus more from Tokyo

Simone Biles says she withdrew from the Olympics gymnastics team final because she wasn't in the right headspace to compete. Here's the latest.

With Simone Biles out, Russians win gymnastics gold over US

The Russian Olympic Committee has won the gold medal in women’s gymnastics after U.S. star Simone Biles exited with a medical issue.

Tennis star Naomi Osaka has lit the cauldron at the Tokyo Games, ending the flame’s journey from Greece to these delayed Olympics. Relive the opening ceremony, in photos.

The Tokyo Olympics saw a full slate of action Saturday with a rebound U.S. women's soccer win and the first medals of the Games. Here's the latest.

For the first time since 2004, the U.S. men’s basketball team has lost in the Olympics, falling to France 83-76. Here's the latest from the Tokyo Games.

Australia’s Ariarne Titmus beat American Katie Ledecky in the 400-meter freestyle in one of the most anticipated races of the Tokyo Olympics.

German athletes' unitard a move 'against sexualization in gymnastics'

Olympics: Skateboarding teen medalists blaze trail for women; plus the latest from Tokyo

After decades in the shadows of men's skateboarding, the future for the sport's daring, trailblazing women suddenly looked brighter than ever at the Tokyo Games on Monday.

The win helped the U.S. star make up for what has so far been the worst showing of her Olympic career. Get the latest on the Tokyo Olympics here.

Kiana Davis practices her jumping form during a promo shoot.

Kiana Davis competes in the triple jump during a competition at Long Beach State University in 2020.