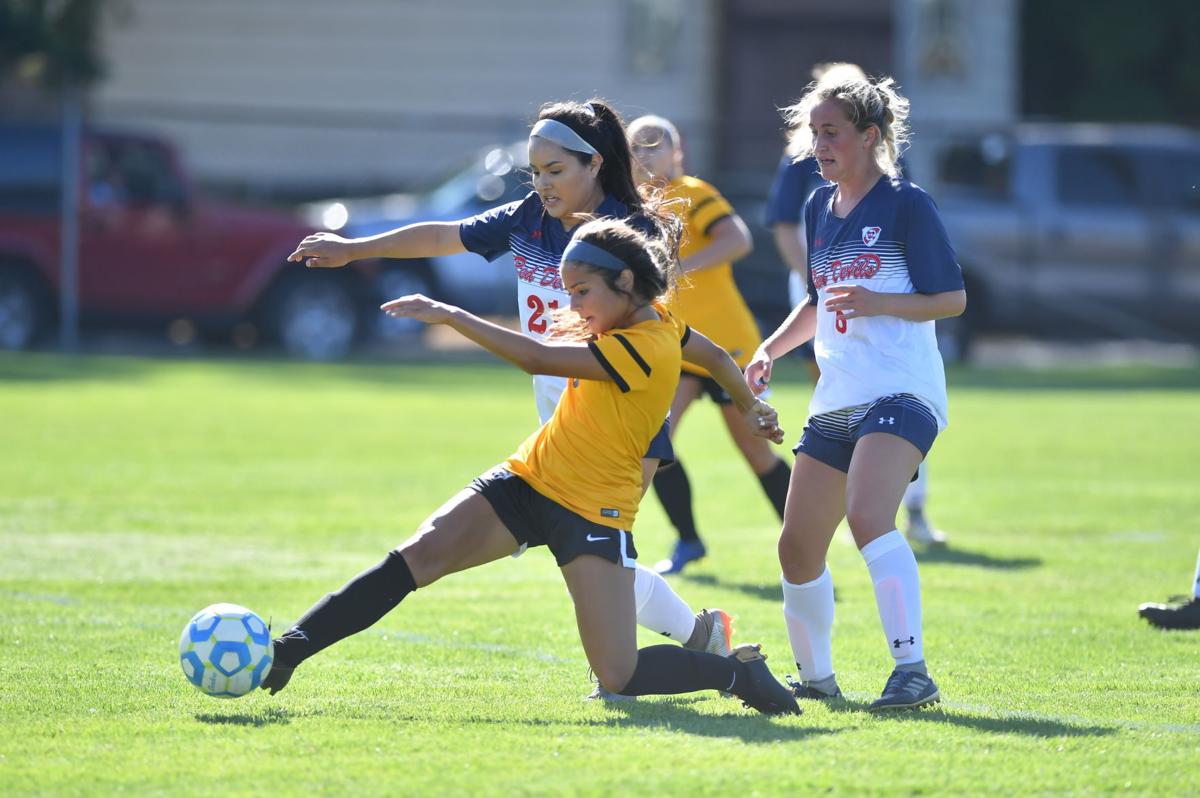 Lower Columbia College's Faith Livsey, right, and Elizabeth Aceveda, behind, battle with a Walla Walla Warrior for the ball during the first half of a game in 20919. 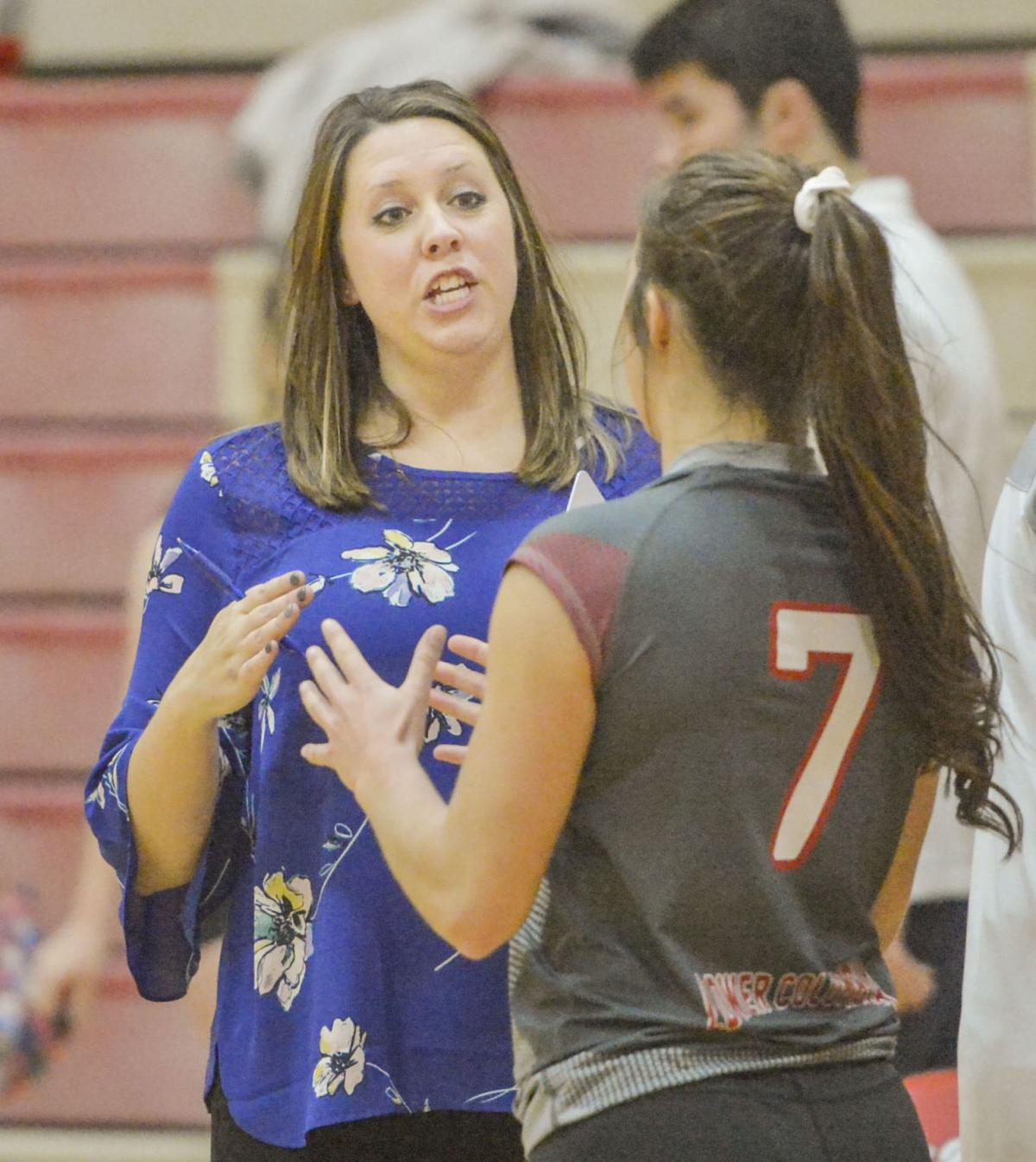 LCC coach Carri Smith talks with Ashlynn Cantwell during a timeout in a regular-season game this year. The Devils enter the NWAC Championships today.

August is supposed to be a time of anticipation and seemingly endless practices in prohibitive heat. The dog days, as they’re known.

Not this year, though. With the COVID-19 pandemic still widely affecting the United States, leagues and organizations across the country have moved their athletic schedules around in order to buy more time. But in doing do they have effectively canceled the second consecutive season of sports.

That means traditional fall sports, like volleyball and soccer, don’t get the thrill of arriving on campus a month before classes with nothing to do but workout and recover. Instead, there is an emptiness that is quite jarring.

“It’s kind of been messing with our heads,” Red Devils volleyball coach Carri Smith said. “We feel like we should be busy right now and we haven’t been. When you have things like this occur, you have to keep a good attitude and be optimistic and just do what you can do.”

Lower Columbia College is planning to bring its student-athletes on campus the first week of September, with a target date for the Sept. 1. Athletes will then begin a quarantine process laid out by the color-coded and phased model announced last month. NWAC teams can’t start formally working out until classes start at the end of September, so the month of September will act as a training period of sorts. Essentially, this is what your stripped down life will be like for the next eight months. Get used to it.

Another layer to all of this is LCC’s penchant for recruiting out-of-state players, which isn’t a rarity at all but certainly creates its own challenge. Now those out-of-towners, some of whom had probably never even heard of Longview-Kelso before their recruitment, won’t get the benefit of the built-in support system of LCC’s staff to help them get settled.

“It’s unfortunate for them,” Smith said. “These kids are excited to get to school and want to do everything from the get-go. But they’re having to quarantine for 14 days before they’re even allowed to start doing any kind of workout. So that’s kind of been hard.”

The obvious, if unspoken, fear here is in asking a group of rambunctious college kids to follow rules. Of course, the rules are objectively no fun but they are designed to keep everyone safe, not just the athletes and coaches. We’ve already seen several high-profile institutions run into these problems, and they have millions of reasons (see: dollars) to play by the rules.

But LCC isn’t worried. In fact, the college is quite optimistic.

Athletic Director Kirc Roland said that so far all of his Red Devils have done everything asked of them. For instance, coaches have refrained from face-to-face meetings with their teams, instead electing to meet over Zoom.

More importantly, everyone in red and white is keenly aware of the risks that come with breaking quarantine or not following the rules as laid out. Everyone wants to play. Nobody wants to be the reason they don’t.

“We also know that we’re certainly not putting them all in a hotel room and doing it that way,” Roland said. “We’re going to ask them, young people, to be as safe as they can during the two weeks. We’re gonna have three weeks to have kids and make sure they’ve quarantined, especially the ones that come from out of town.”

For now that’s where things stand on campus. It’s the most certain of anything LCC has been since the beginning of March, when the NWAC cancelled its championship basketball tournaments as they were happening.

That means that answers to questions, such as will fans be allowed at games, are nowhere near LCC’s radar at the moment. The Devils just want to get through September, and then on to the new year.

“That’s not at the forefront right now,” Roland said. “We will soon be sending out our booster club letters, and part of that is going to be that there is a potential that there may not be fans in the stands. So our hope is our boosters will understand that and still continue to support us, because we still need to raise money to provide scholarships for our student-athletes.

“Right now, we’re being up front on that, as far as our play goes, but once January and February come, the hope is we’ll be able to have some fans in the stands enjoying this. In the meantime, we’re just trying to make this a positive experience for our student-athletes that includes competition. That’s number one.”

It seemed an impossibility, a reach, an unlikely event of the highest order.

People keep talking about the Seattle Mariners like a feel-good thing, smiling while patting the Mariners on the collective head condescending…

Dodgers starter May hit on foot by grounder, exits early

PHOENIX (AP) — Los Angeles Dodgers starting pitcher Dustin May left Thursday night's game against the Arizona Diamondbacks after just one inning after he was hit on the left foot by a sharp grounder.

CLEVELAND (AP) — Brady Singer's bid at history turned to heartbreak in one pitch.

When the Triangle Bowl doors slide open for the first time since March, bowlers will not be greeted with the familiar smell of lane oil, greas…

Lower Columbia College's Faith Livsey, right, and Elizabeth Aceveda, behind, battle with a Walla Walla Warrior for the ball during the first half of a game in 20919.

LCC coach Carri Smith talks with Ashlynn Cantwell during a timeout in a regular-season game this year. The Devils enter the NWAC Championships today.