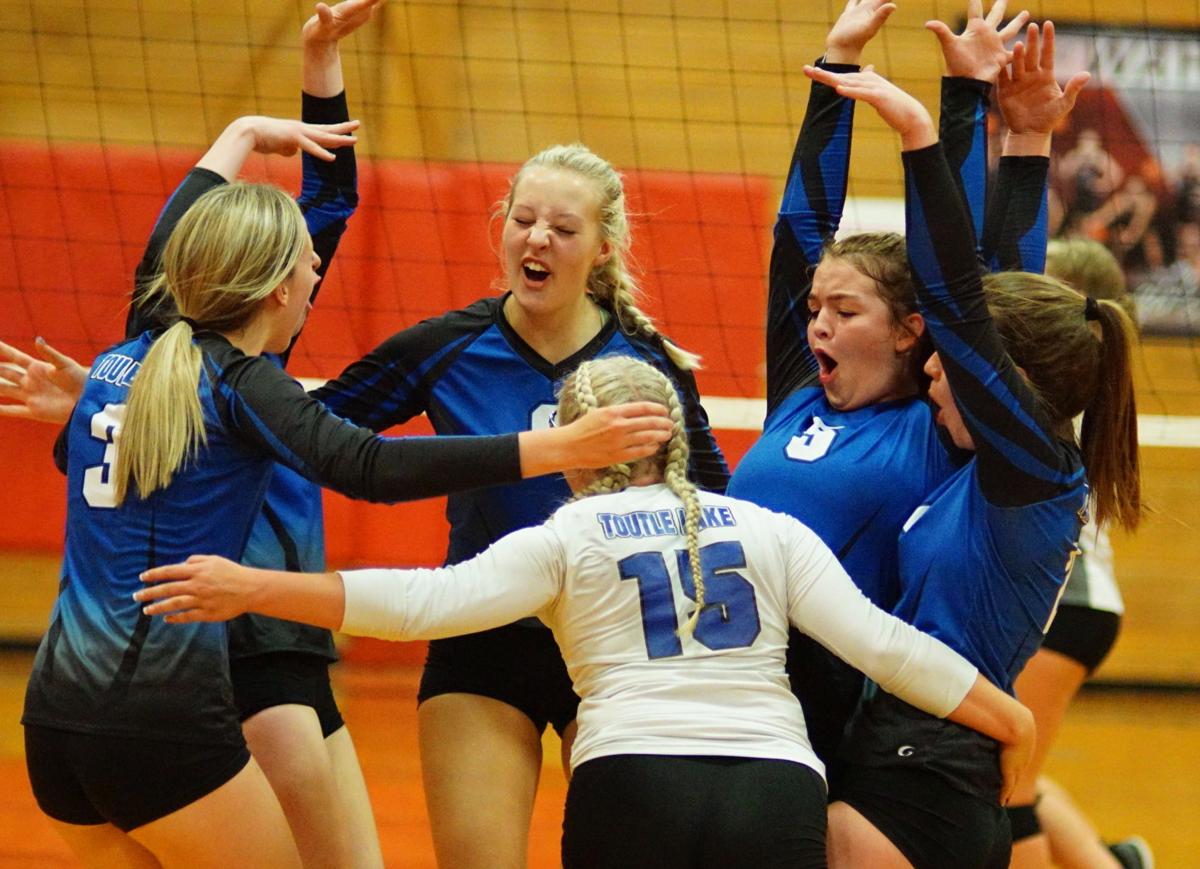 Toutle Lake players celebrate a point in their three-set win over Wahkiakum on Sept. 14 in Cathlamet. 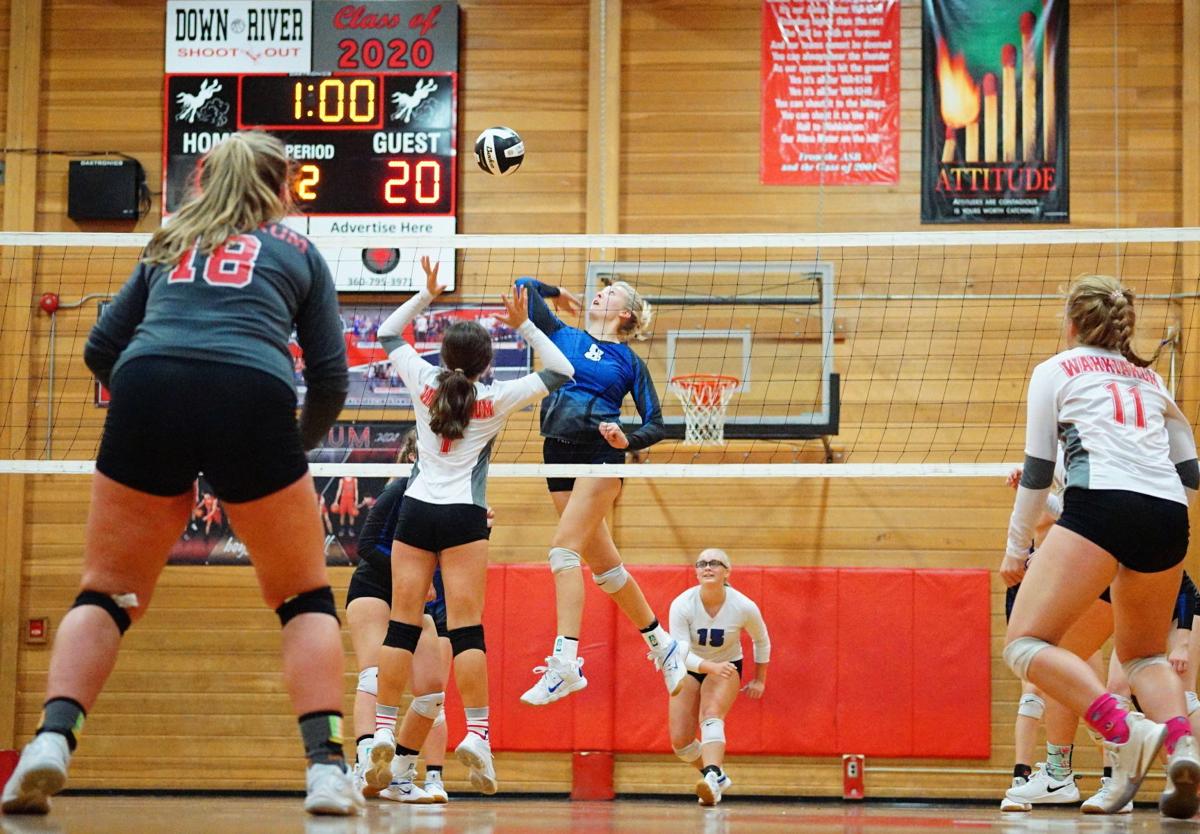 Toutle Lake's Grace Hadaller reaches back for a spike in the second set of the Ducks' sweep of Wahkiakum on Sept. 14 in Cathlamet. Hadaller finished with a game-high 10 kills.

“We played much better tonight,” TL coach Don Merzoian said. “It was good to see them having fun and working hard together.”

Grace Hadaller finished on 10 kills to lead the offense while Ileigh Lynn had seven and Jordyn Grabenhorst logged six, along with eight assists. Natalie Bair dished out 15 assists, finished off three kills herself, and was perfect from the service line.

Meanwhile, Makinnley Byman had eight digs for the Ducks.

Wahkiakum’s offense came from all over on the night. Kameron Watkins led the way with five kills, Bailey McKinley and Courtney Carlson both had three, and Emmie Niemela logged two. Carlson also finished with 14 assists and four digs, while Reigha Niemeyer led in the digs column with eight.

Toutle Lake (2-2) will get a big test Thursday when it hosts Kalama, while Wahkiakum (0-3) will welcome Adna.

Sophomore middle blocker Ali Millspaugh led the Monarchs with 10 kills and added three blocks at the net. Ellie Weber came in right behind her with nine kills and an additional block, Emma Fisher had eight kills and a pair of aces, and Isabella Merzoian finished with six.

At the center of the offense, Kendall Blondin set up 40 assists.

Madi Noel led the back row with 27 digs — and added two aces of her own — while Hallie Watson and Brooklyn Schlecht logged 13 digs apiece.

The only sour note on the night came at the beginning of the second set, when junior middle blocker Reagan Wilkinson landed awkwardly and had to leave the match with an ankle injury. Hewitt said they were hopeful that there wasn’t any structural damage, but that they’d check it again Wednesday.

With Wilkinson out, the Monarchs had to adjust to a new lineup on the fly, and it took a few points to sort that out, letting the Trappers stay in the middle set a bit longer. By the third, though, MM sorted itself out to see out the final set by nine points.

“We pulled it out and got the job done in three sets,” Hewitt said. “I’m proud of the girls for playing through the chaos, and finishing strong.”

Mark Morris (4-0) will get a day off before heading back south to take on Hockinson on Thursday.

“Bit of a reality check for us tonight,” Clatskanie coach Amanda Baker said. “We did not show up ready to play, then woke up and played tough the second game, but couldn’t keep it going.”

Clatskanie’s (4-1) Thursday matchup at Dayton has already been canceled; next up on the Tigers’ schedule is a matchup against Santiam Christian at the OES Invitational in Portland on Saturday.

Chinooks get back on track with win over La Center

KALAMA — The Kalama volleyball team got back to winning ways to wrap up non-league play with a victory, sweeping 1A La Center 25-18, 25-12, 25-16 in what coach Jeni O’Neil described as “an overall great performance by all.”

Paige Chinchen dropped another double-double, leading the offense with 15 kills and bringing up 10 digs.

Rhegan O’Neil added a double-double of her own, dishing out 23 assists and pacing the defensive effort with a team-high 13 digs.

Kendall Collins had another strong night in the middle with eight kills, and Ella Capen added five of her own.

Kalama (2-2) will start the campaign to defend its Central 2B League title with a big showdown Thursday, squaring off against Toutle Lake in Toutle.

Wearing the libero jersey, Pervie Reed finished with a passing efficiency of 1.98 on 56 touches.

Three Rivers Christian (0-1) is scheduled to get a week off before hosting Seton Catholic on Sept. 21.

3A/4A Volleyball: Kelso 'just a bit off,' falls to Union in five

KELSO — The Kelso volleyball team had its runs Thursday, but couldn’t get out of its own way for much of a five-set loss at home to Union, 25-…

TOUTLE — Kalama was able to fend off a hungry Toutle Lake team in a highly competitive 2B showdown on Thursday. The Chinooks took down the Duc…

CASTLE ROCK — The Castle Rock volleyball team welcomed 2A Black Hills to town on Thursday, but they didn’t let the higher classification intim…

TOLEDO — The Toledo Riverhawks fought back after dropping the first set to hold off a scrappy Morton-White Pass team in a tightly-contested, f…

VANCOUVER — For the first time this season, the Kelso volleyball team’s back was against the wall, but the Hilanders came back from a late def…

Toutle Lake players celebrate a point in their three-set win over Wahkiakum on Sept. 14 in Cathlamet.

Toutle Lake's Grace Hadaller reaches back for a spike in the second set of the Ducks' sweep of Wahkiakum on Sept. 14 in Cathlamet. Hadaller finished with a game-high 10 kills.