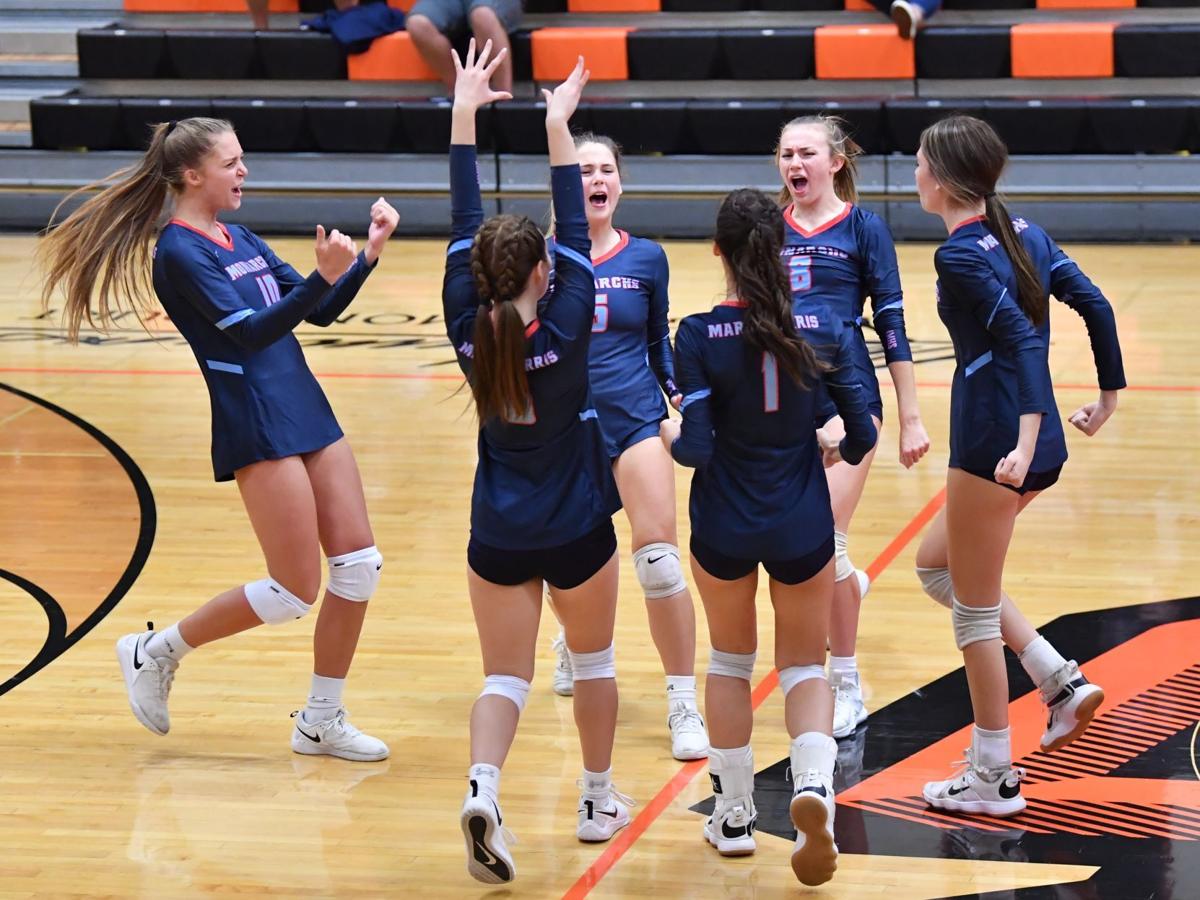 Mark Morris players celebrate a block in the first set of the Monarchs' four-set win at Kalama on Sept. 13. 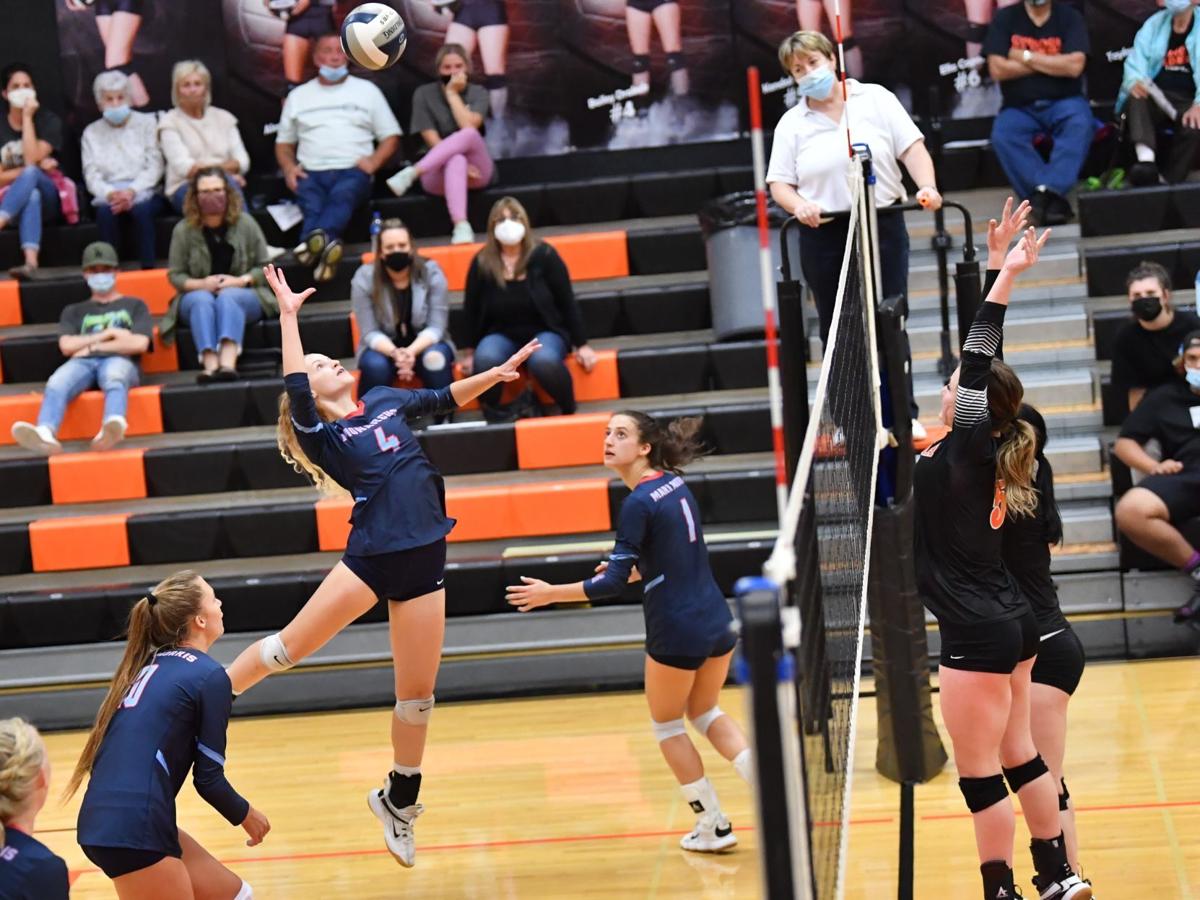 Ellie Weber goes up for an attack in Mark Morris' four-set win at Kalama on Sept. 13. Weber led the Monarchs with 13 kills. 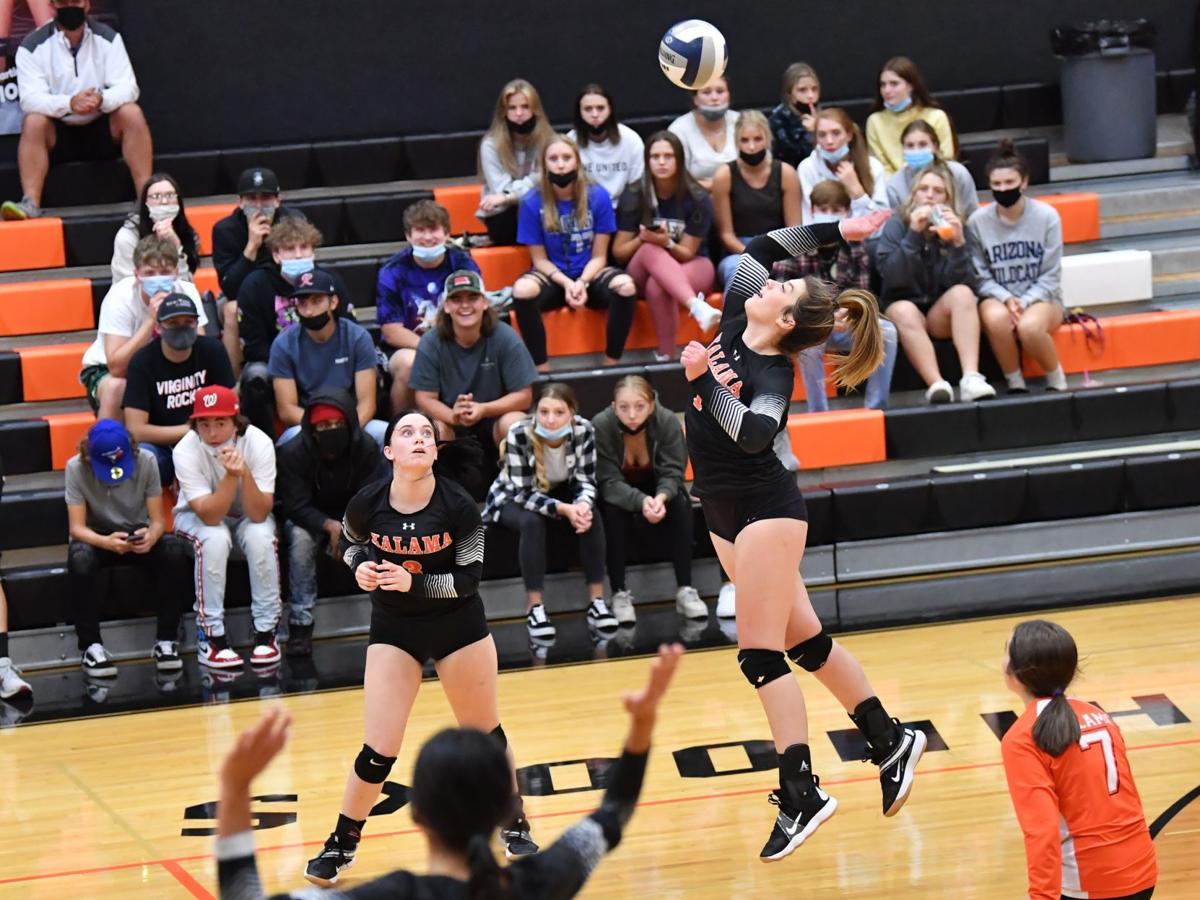 Paige Chinchen goes up for an attack from the back row in Kalama's four-set defeat to Mark Morris on Sept. 13. Chinchen led the Chinooks with a 16-kill, 16-dig double-double. 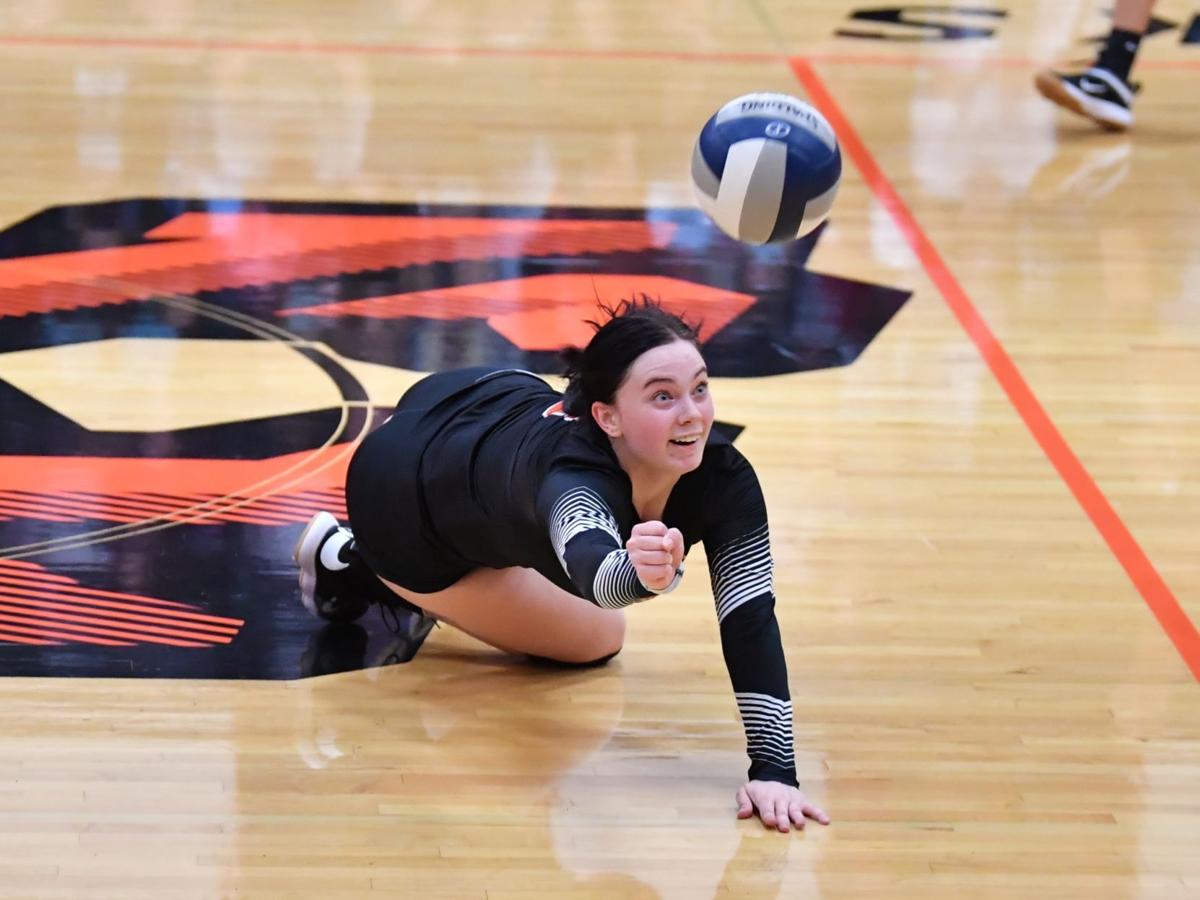 Kalama setter Rhegan O'Neil dives to dig up a ball in the Chinooks' four-set loss to Mark Morris on Sept. 13 at home. O'Neil dished out 42 assists. 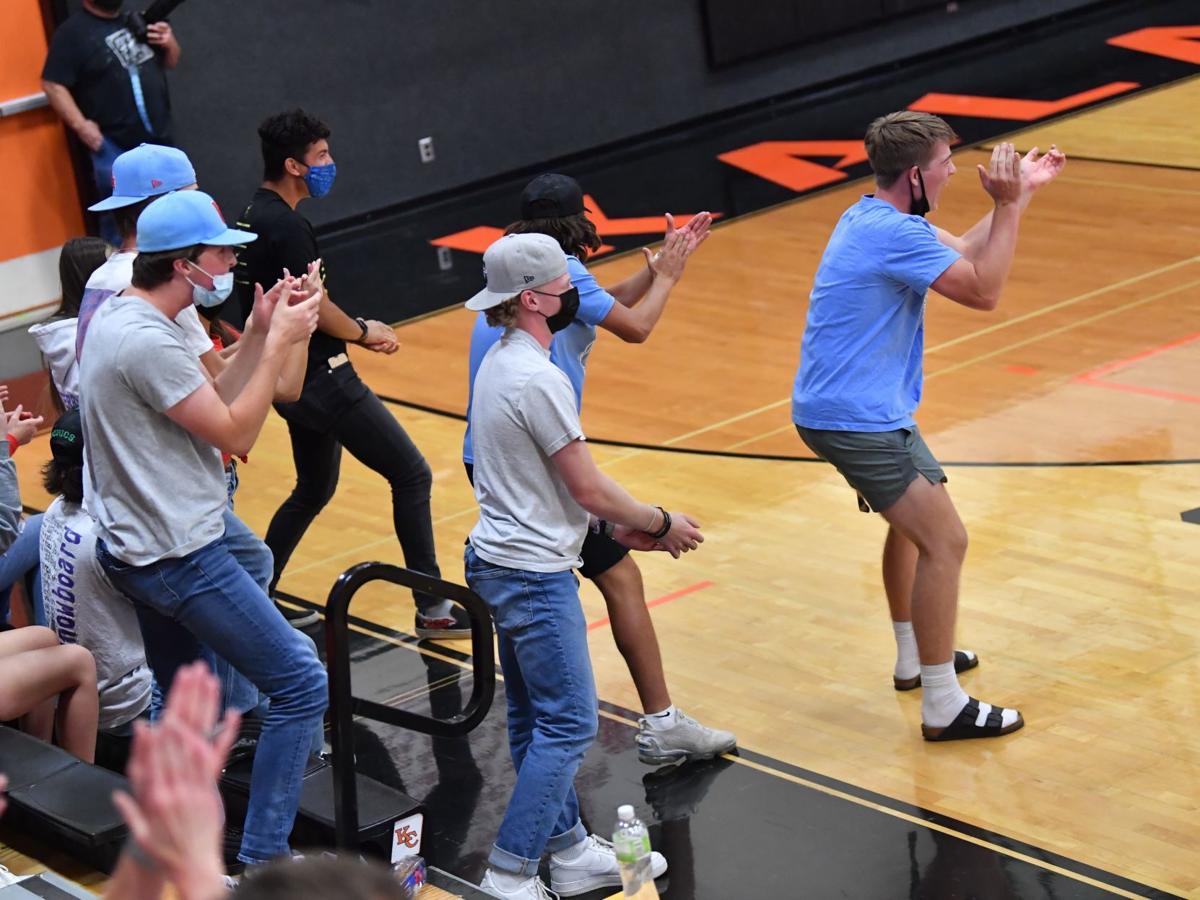 Mark Morris students make their presence known during a stoppage in play at the Monarchs' four-set win in Kalama on Sept. 13.

KALAMA — The perfect storm made its way up the hill Monday.

A veteran Mark Morris side that’s started the year off fast, with big hitters and a tall blocking presence at the net made the bus ride south. There waiting for them was Kalama, the hardest-hitting 2B team west of the Cascades and south of Seattle.

Throw in a traveling contingent of Mark Morris students who had made the trip after hearing rumors about how raucous Kalama’s student section had been in a previous match against Castle Rock, and all the pieces were there for a classic.

The Monarchs won despite trailing midway through each of the final three sets. And even when Mark Morris was ahead, it was close; the visitors only ever led by more than five at the end of the second set, which they ended on a 9-0 run.

“It’s about keeping them calm,” MM coach Carmen Hewitt said. “When they get tight, the momentum shifts so quickly. When you have crowds like this, they really help your side get amped up, or they get really quiet when you make a couple mistakes. It’s about pulling yourself out of that and overcoming the crowd and staying mentally tough.”

Ironically, the set the Monarchs handled the crowd the best was the first, when an early 7-0 run gave them the lead for good, and a balanced attack that saw five different players register kills powered the way to a 25-21 win.

But toward the end of that set, the Kalama student section started to find its voice, and it only got louder when the Chinooks took a 13-7 lead in the second.

“We tend to try to play safe, and we go to tips and pushes and things like that,” Hewitt said. “When we swing, we have a very solid front row, a lot of weapons to go to. But when we play safe, we get in hole. My message is always to swing for the hitters in the front row. When they do that, they get amped, because they get some really nice kills.”

A service error let the Monarchs side out, and a 5-0 run got them to within one and forced Kalama timeout. The Chinooks got one point back — and another two a few points later — but as MM started swinging, it built up more and more momentum. It ended with nine straight points — including four kills by Ellie Weber, two by Bella Merzoian, and a pair of late Madison Noel aces.

By the third, the fans on both sides of the court were well and truly playing off each other, and once again, Kalama took a lead early at 14-8. This time, though, it was the Chinooks to get the run, going up 23-14 with a barrage of big swings and eventually finishing off the set.

“It’s just about focusing,” O’Neil said. “It’s really about being mentally prepared. That’s something we’re really working on, we struggled with it in the preseason. Which is why we play these bigger schools. In theory, these bigger schools should be beating us; they’ve got 60 girls to choose from, I’ve got 15. So I always tell the girls going into it, ‘We certainly have nothing to lose.’”

That mentality continued into the fourth set. Kalama took a 14-9 lead, which 11 of its points coming on kills — six from junior Kendal Collins, who racked up seven of her 13 kills in the final set.

“Kendal is one of my favorite players I’ve ever coached,” O’Neil said. “She’s got the fight. Coaches can’t teach fight, and Kendal just brings the energy. And when she gets mad, you better watch out.”

But once again, Mark Morris had a run up its sleeve. Five straight points turned a 15-14 deficit into a 19-15 lead, and despite a Kalama rally and the final of three doses of scoreboard-related confusion, the Monarchs kept the lead. Back-to-back aces gave MM some breathing room, and one last Emma Fisher kill won it, spilling the traveling Monarchs onto the court to belt out the fight song as Hewitt let herself relax and catch her breath.

“I legitimately got a workout in on my Apple watch,” she said with a laugh.

Weber led the Monarchs with 13 kills, while Merzoian added seven and Millspaugh and Fisher both had five. At the net, Reagan Wilkinson logged five blocks, and Millspaugh put up four. Kendall Blondin dished out 55 assists, and Noel racked up 15 digs to go along with three aces.

Kalama’s Paige Chinchen led all players with 16 kills and 16 digs for a double-double. Irene Martinez came in with nine kills, and Rhegan O’Neil had 42 assists.

Kalama (1-2) will get one more dose of action against a higher-classification school before it begins Central 2B League play, hosting La Center on Tuesday. Mark Morris (3-0) will return to 2A Greater St. Helens League action Tuesday at Fort Vancouver.

3A/4A Volleyball: Kelso 'just a bit off,' falls to Union in five

KELSO — The Kelso volleyball team had its runs Thursday, but couldn’t get out of its own way for much of a five-set loss at home to Union, 25-…

TOUTLE — Kalama was able to fend off a hungry Toutle Lake team in a highly competitive 2B showdown on Thursday. The Chinooks took down the Duc…

CASTLE ROCK — The Castle Rock volleyball team welcomed 2A Black Hills to town on Thursday, but they didn’t let the higher classification intim…

TOLEDO — The Toledo Riverhawks fought back after dropping the first set to hold off a scrappy Morton-White Pass team in a tightly-contested, f…

VANCOUVER — For the first time this season, the Kelso volleyball team’s back was against the wall, but the Hilanders came back from a late def…

Mark Morris players celebrate a block in the first set of the Monarchs' four-set win at Kalama on Sept. 13.

Ellie Weber goes up for an attack in Mark Morris' four-set win at Kalama on Sept. 13. Weber led the Monarchs with 13 kills.

Paige Chinchen goes up for an attack from the back row in Kalama's four-set defeat to Mark Morris on Sept. 13. Chinchen led the Chinooks with a 16-kill, 16-dig double-double.

Kalama setter Rhegan O'Neil dives to dig up a ball in the Chinooks' four-set loss to Mark Morris on Sept. 13 at home. O'Neil dished out 42 assists.

Mark Morris students make their presence known during a stoppage in play at the Monarchs' four-set win in Kalama on Sept. 13.