Become a Member
Read Today's E-edition
Share This
3A State Volleyball: Kelso places 7th with sweep of Bishop Blanchet
0 comments
Share this
1 of 5 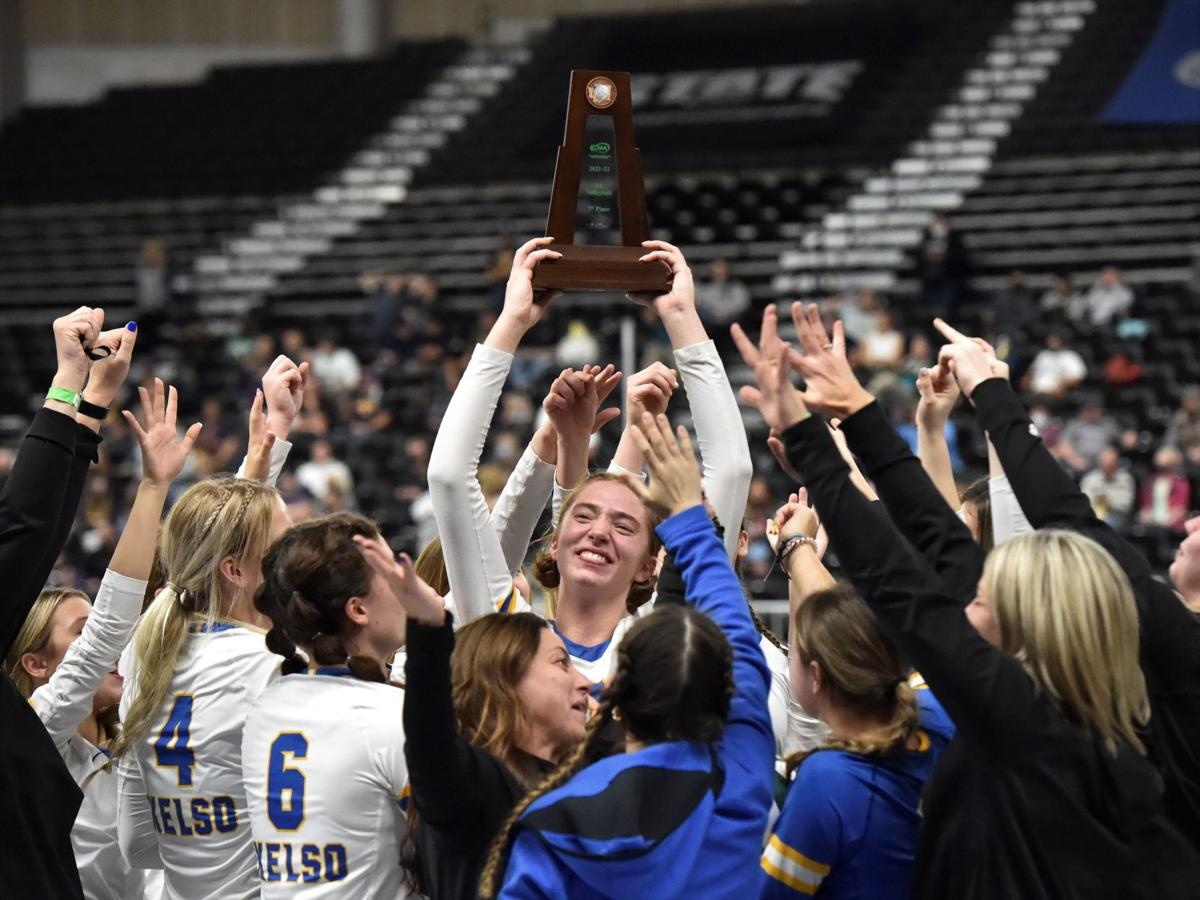 Kelso's Bella Hadaller holds up the seventh place trophy as her team gathers around her after the Hilanders swept Bishop Blanchet at the 3A WIAA State Tournament on Friday, Nov. 19, at the Yakima Valley SunDome. 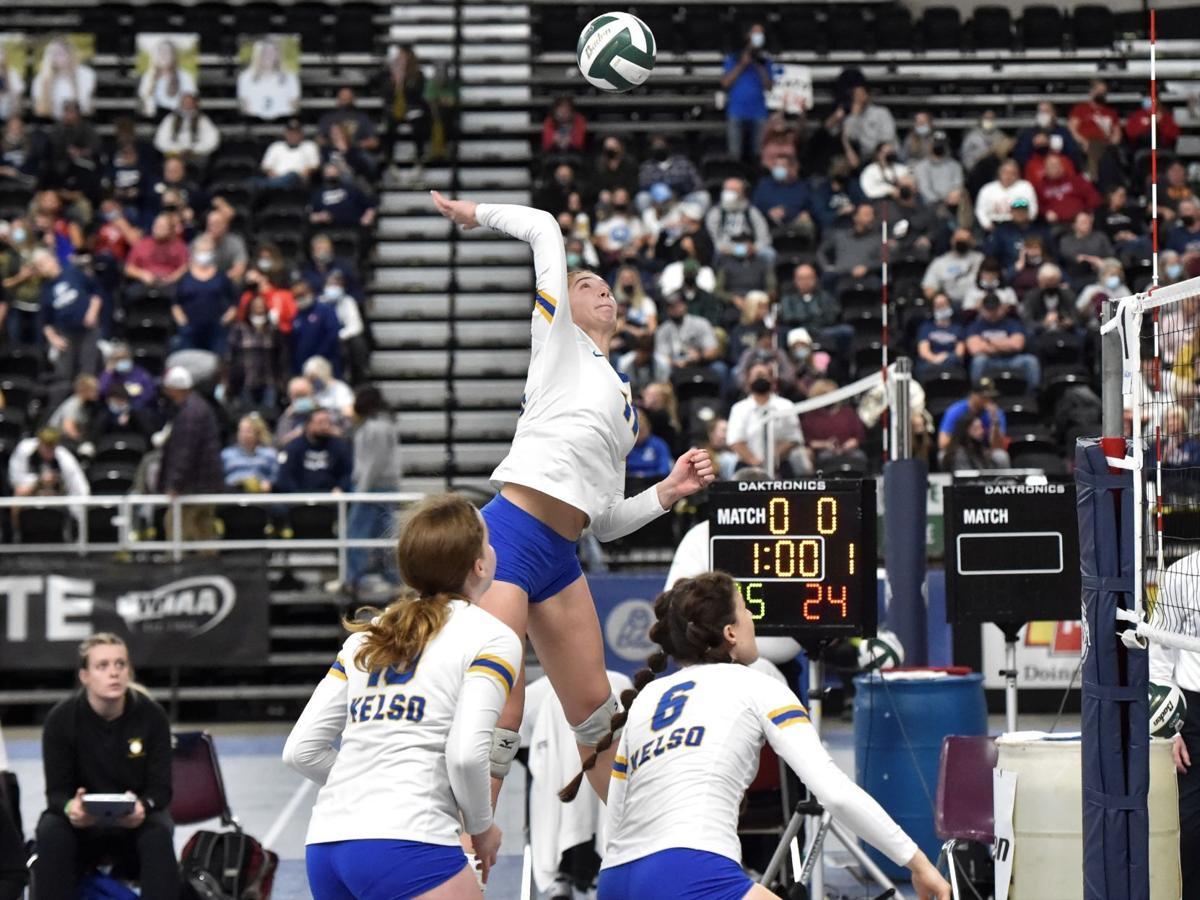 Kelso's Bella Hadaller leaps to make a play on the ball against Bishop Blanchet on Friday, Nov. 19, at the Yakima Valley SunDome. 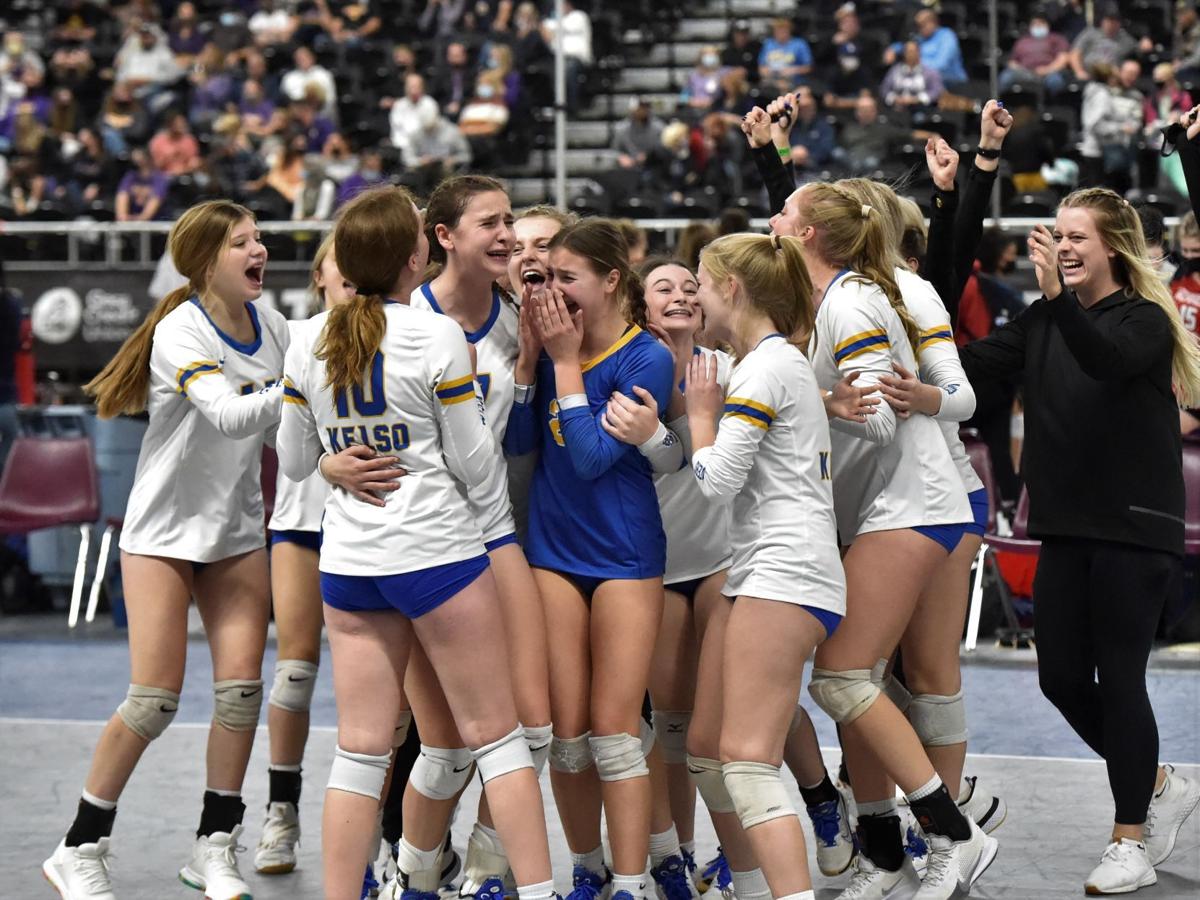 The Kelso volleyball team swarms the court centered around Rielee Gourde after beating Bishop Blanchet on Friday, Nov. 19, at the Yakima Valley SunDome. 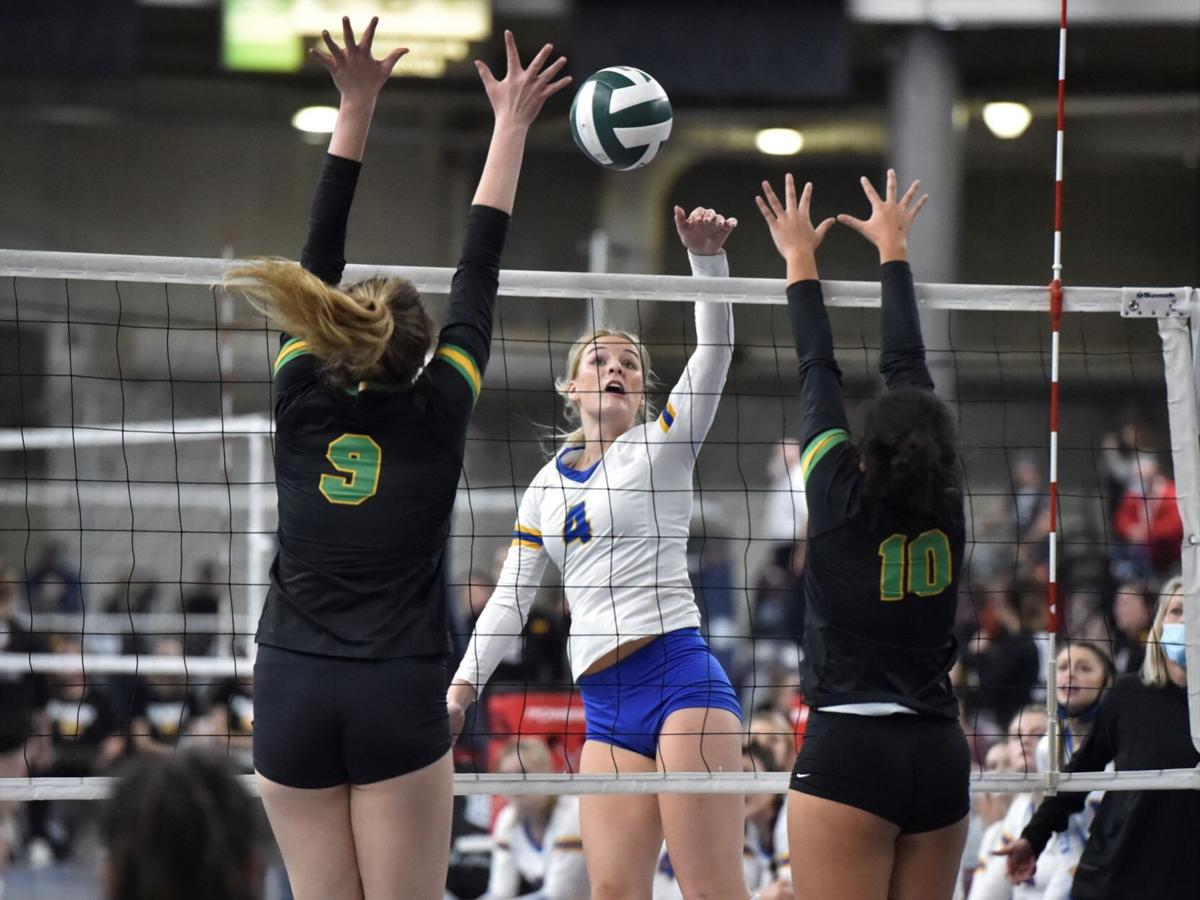 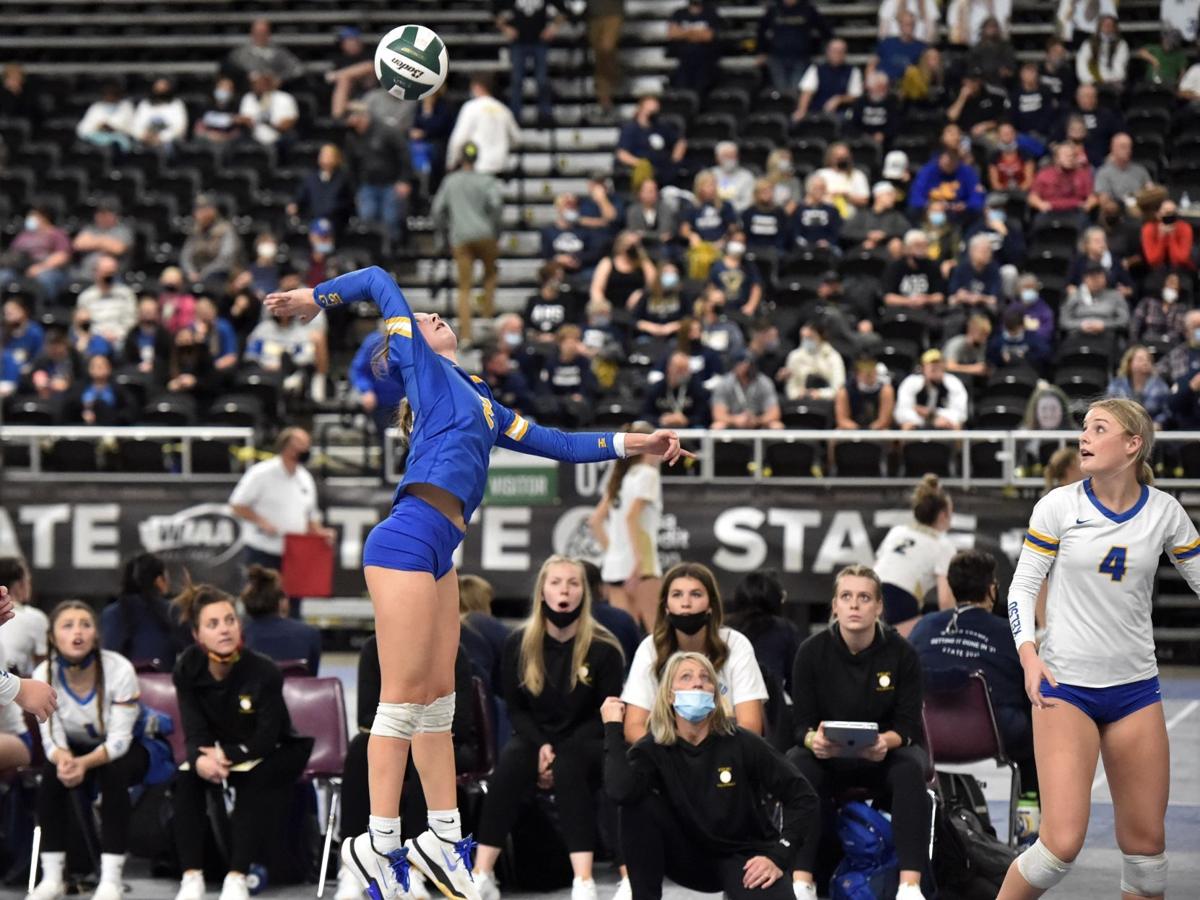 Kelso's Rielee Gourde rises to hit the ball from the back row against Bishop Blanchet on Friday, Nov. 19, at the Yakima Valley SunDome.

YAKIMA — It all finally came together for the Kelso Volleyball games. After inconsistencies and dropped sets throughout the 3A WIAA State Tournament, the Hilanders saved their best volleyball for last and went out on a high note as they swept Bishop Blanchet 26-24, 27-25, 25-15 and finished seventh in the state at the Yakima Valley SunDome on Friday.

“It was just such a sweet finish to all the struggles that we’ve gone through and all of the sets that we kind of faltered on,” Kelso coach Michelle Mury said. “It was just great to finish with a 3-0 sweep with a team that’s ranked higher than us and finish all the way to the end.”

The Hilanders needed a few extra points to close out the first two sets, but they didn’t waver. They fed off the energy from the bench and finished off sets like they hadn’t been able to in some other matches this week.

“I feel like these last games, when everyone’s exhausted, it’s about who’s got the heart,” Mury said “We were firing on all cylinders and that’s what we needed to do to win. It just tastes so good.”

Bella Hadaller led Kelso’s offense all season, and she helped propel the Hilanders with 82 kills across the final three games of the tournament, all of which were wins. Hadaller capped her performance with 22 kills in the three-set sweep and hoisted the seventh place trophy as her team gathered around her.

“Just feeling like this is it,” Hadaller said of the Hilanders’ mindset in the final match. “Yeah we’re going on to college, but this is our last time playing together and making memories with my family, my sisters on the court. It’s just an amazing feeling and I wouldn’t want to do it with any other team.”

The Hilanders entered the tournament as the 12th seed, but they walk away as the seventh-best team across the state for 3A teams; beating the sixth-seeded Braves was just the icing on the cake. In order to get there, Kelso brought the most energy they’ve showed all week. Every member of the bench was celebrating each point, growing louder as the victory got closer and closer.

“That was our focus too,” Mury said. “Play it like it’s you last game and have fun and really just enjoy what I think is a celebration of enjoying the preparation.”

The Hilanders feel unstoppable when they have that energy behind them, according to Hadaller.

“I think when we all have momentum it’s just like we automatically win,” she said. “We have ups and downs, but we always kind of get out of it with our teamwork and our unity and I think that’s kind of what pushed us in this game, especially to come together and take the W.”

Natalie Fraley dished in 13 kills of her own to help boost the Kelso offense. Emily Thompson bolstered things at setter with 41 assists on the match.

Rielee Gourde continued to lead the way in digs for the Hilanders with 15 and Hadaller was right behind her with 14. Olivia Chilton continued her strong showing at the net with a team-high three blocks.

Every season has highs and lows, but the Hilanders felt as though they battled more peaks and valleys than they’ve faced in the past. They were tested at multiple points, but they came out stronger in the end.

“There’s growth when you have challenges and this year we’ve had more challenges than we’ve ever had before…we earned it together and everyone played a role.”

Hadaller agreed that the obstacles made the win that much sweeter and exemplifies this Kelso squad.

“I think it’s definitely been a battle,” she said. “There’s so many things that we’ve had to adjust to throughout the season and those ups and downs. But we just come out of it and we always do. I think that’s one thing that I love about this team, we always find a way to find the good and put it away.”

After fighting through the hurdles, Mury was elated for her team’s accomplishments.

“It feels so good,” she said. “Just all of the stress and to finally have some relief, it feels satisfying. We felt happy getting here, but we’re not going to feel satisfied if we don’t go out there and leave it out there and finish strong.”

The Hilanders made it to the dance the last time it was held in 2019, so it took even more of a team effort to place this time around.

“The first time we came it was more just like Cinderella story with everybody celebrating,” she said. “This one was a little harder. We didn’t have all the fans, all the kids here because it was during the week, so it really had to come from within.”

Hadaller clutched the trophy tight after the match once everyone had their chance to take their photos with it. As captain of the team she said her goal was to leave a legacy, and a new trophy in the cases back at Kelso should just about do the trick.

2A State Volleyball: Mark Morris takes down Washington in four

Editor’s note: Mark Morris beat Enumclaw in four sets to earn seventh place at the State Tournament on Saturday night. A full recap of that ga…

Kelso's Bella Hadaller holds up the seventh place trophy as her team gathers around her after the Hilanders swept Bishop Blanchet at the 3A WIAA State Tournament on Friday, Nov. 19, at the Yakima Valley SunDome.

Kelso's Bella Hadaller leaps to make a play on the ball against Bishop Blanchet on Friday, Nov. 19, at the Yakima Valley SunDome.

The Kelso volleyball team swarms the court centered around Rielee Gourde after beating Bishop Blanchet on Friday, Nov. 19, at the Yakima Valley SunDome.

Kelso's Rielee Gourde rises to hit the ball from the back row against Bishop Blanchet on Friday, Nov. 19, at the Yakima Valley SunDome.