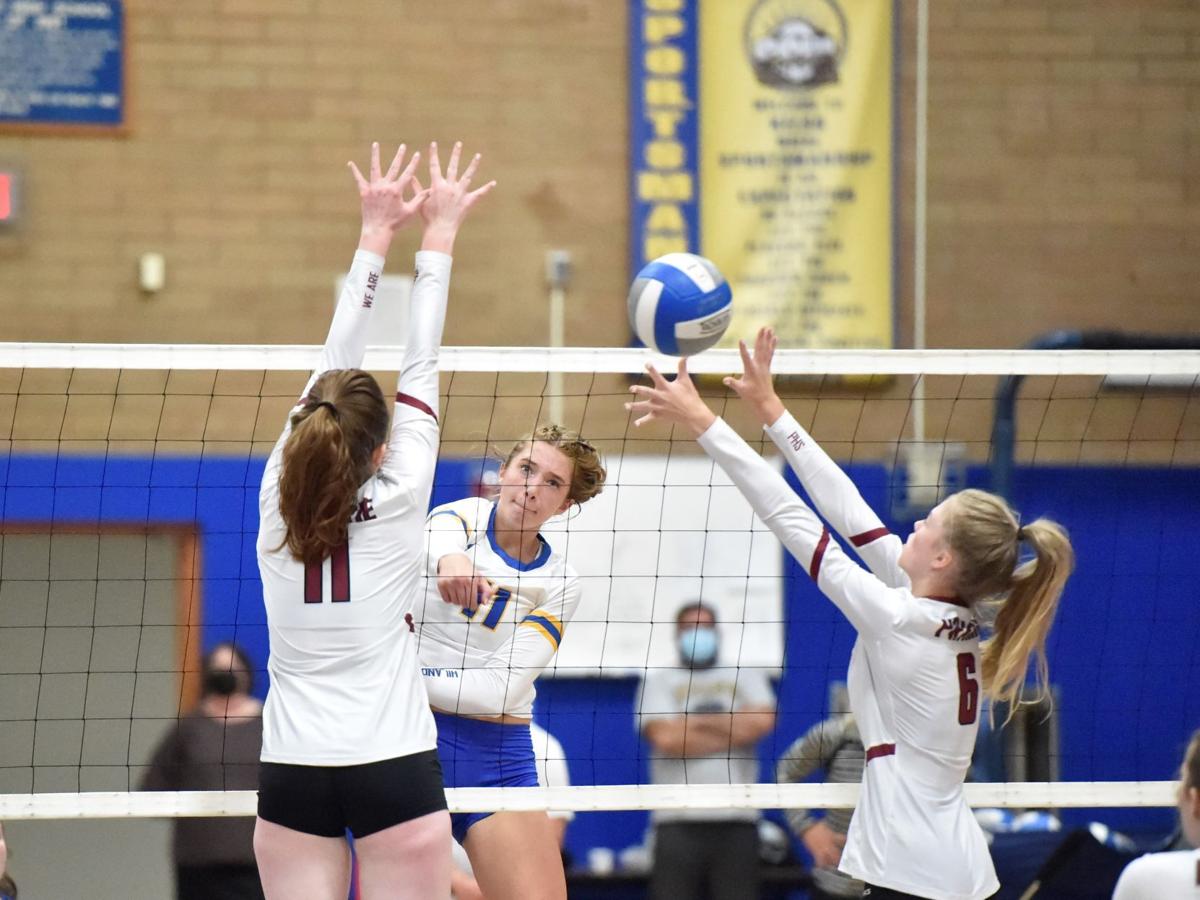 Kelso's Bella Hadaller spikes the ball between two Prairie defenders for a kill on Thursday, Sept. 23, at Kelso High School. 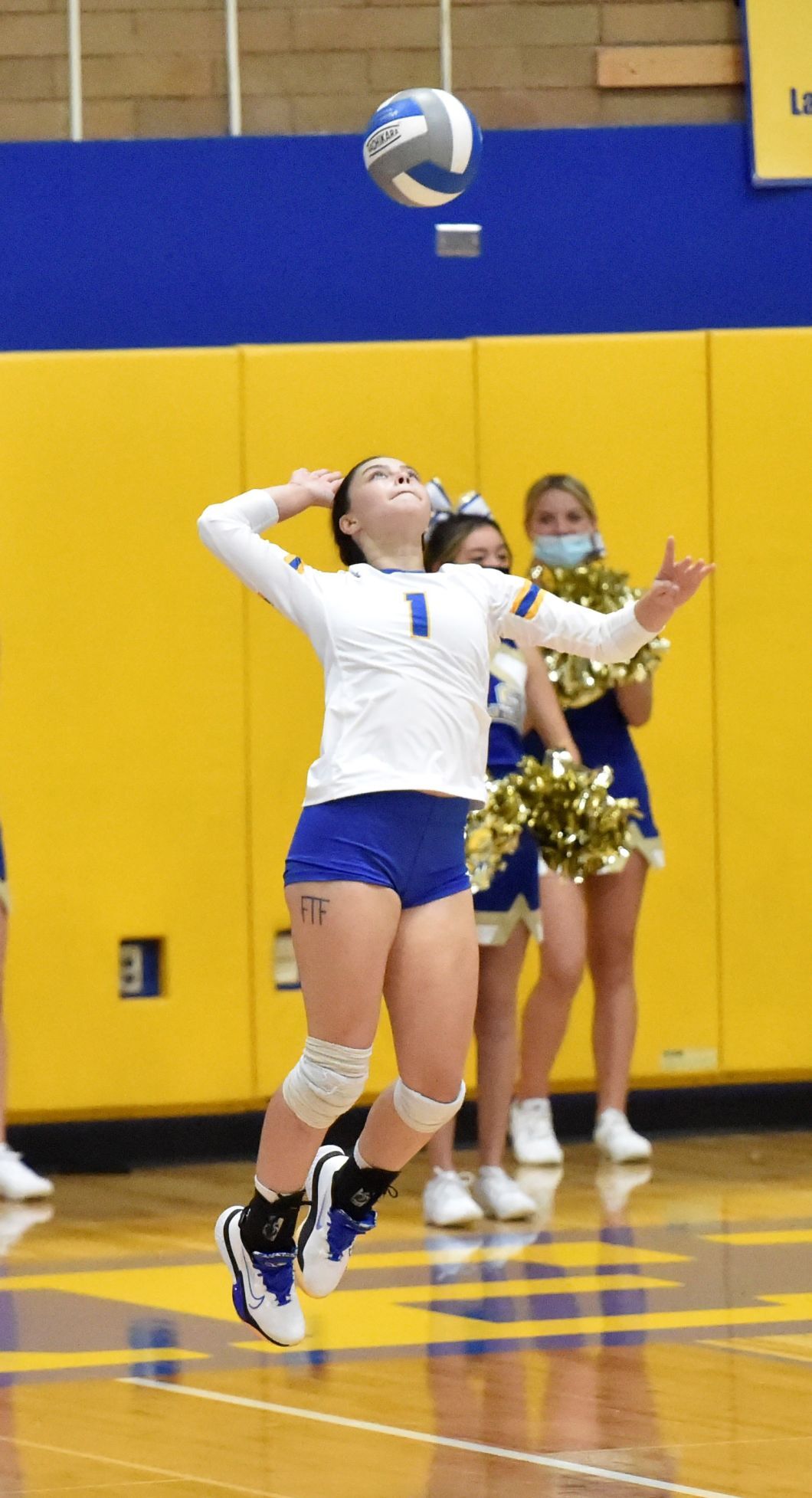 Kelso's Annalee Johnson serves the ball against Prairie on Thurdsay, Sept. 23 at Kelso High School. Johnson had a big day at the service line on her way to recording nine aces for the Hilanders. 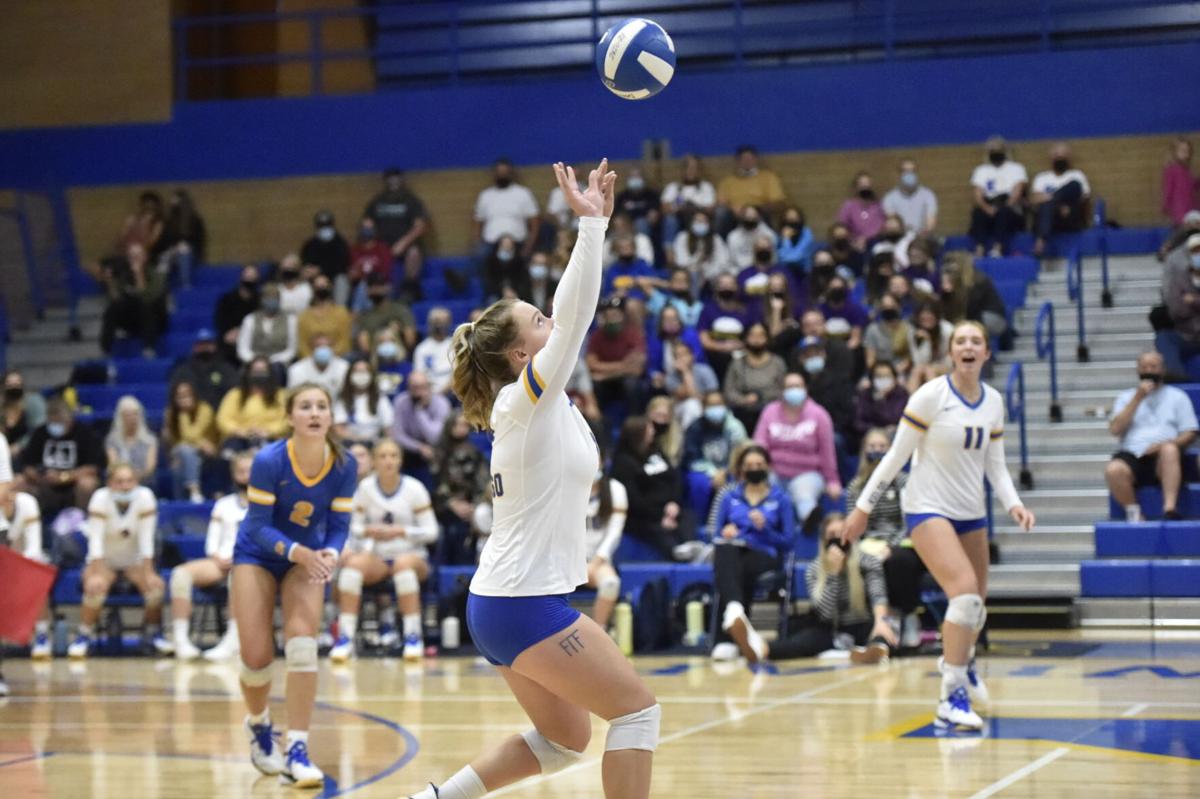 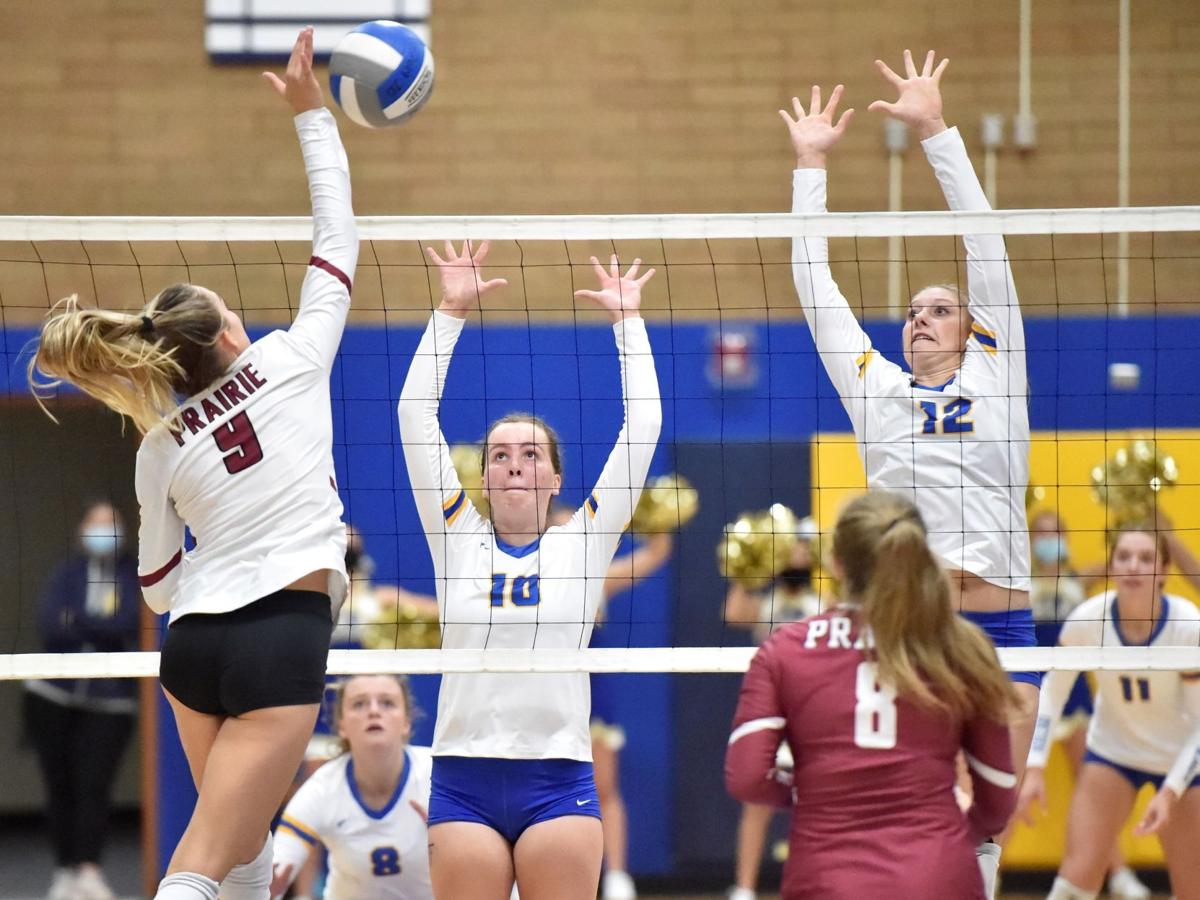 KELSO — Coming off back-to-back losses, Kelso volleyball coach Michelle Mury knew it was time to make some changes as they came back home to play Prairie on Thursday night.

“I did mix it up, but I didn’t mix it up so different,” Mury said. “I went back to a 5-1, what we did in the jamboree. I went back to what we were successful at and then just did a little tweak from there.”

In addition to going back to the 5-1, Mury switched Rielee Gourde back to the blue shirt at libero and moved Presley Nippert back to the outside and led off with Annalee Johnson at the service line.

Kelso dominated all facets of the game against Prairie en route to a sweep where they didn’t let the Falcons hang around for very long with blowout wins of 25-9, 25-9, 25-12.

“It felt good, it felt like how we ended last year and so now it’s just going to keep getting better,” Mury said.

The changes were evident from the very first serve as Johnson took to the line and rattled off 10 straight points to put the Hilanders in control early. Johnson’s serves worked wonders against the Falcon defense on her way to a game-high nine aces on the night.

“It just gives our whole team a lot of confidence,” Mury said of Johnson’s start. “It’s momentum…If we would have had that the last two games, I feel like it would have been a different result, but live and learn.”

From there, the Hilanders rolled. They communicated, covered and rarely let Prairie gain any semblance of a run throughout the match. Kelso was on the attack, keeping the Falcons in recovery mode for the majority of the night, but Prairie had no answers for the revamped Kelso squad.

“I just think we did the basics well tonight and that allowed us to hit well,” Mury said.

However, not everything changed for the Kelso attack. The offense still worked through Bella Hadaller, who posted a team-high 15 kills, it just went through the hands of Emily Thompson at setter, who gains a lot of responsibility with the switch back to the 5-1.

“A lot of pressure on her shoulders coming up from JV last year, so she’s going to get better and better and better,” Mury said of Thompson. “So that’s what I’m excited to see, the confidence. And then for her to trust who she has around her.”

Nippert also took to her move to the outside well as the lefty added seven kills for the Hilanders as Kelso worked multiple hitters into different spots to keep the Falcons guessing. Mury hopes this is something her squad can expand upon moving forward.

“What we need to do is keep adding arsenal to our offense,” she said. “So keep adding different plays, keep mixing it up because the blockers are going to key on Bella, so we’ve got to have her coming from a lot of different directions.”

Defensively, Gourde finished with a team-high 12 digs in her move back to libero and Johnson added 10 for Kelso.

The consistency from the service line, led by Johnson, is also something the Hilanders need to keep up if they want to flip the script the next time they face teams from the top of the conference, Mury added.

“Our serving game, we usually use that as an offense to take them out of their offense right off the bat,” she said. “Then we have to execute, so we need to control what we can control.”

Kelso (4-3) will look to keep the momentum from their dominant showing at Battle Ground on Tuesday, but Mury is confident, as evidenced by her response when asked if Thursday’s game felt like a turning point for her squad.

Kelso's Bella Hadaller spikes the ball between two Prairie defenders for a kill on Thursday, Sept. 23, at Kelso High School.

Kelso's Annalee Johnson serves the ball against Prairie on Thurdsay, Sept. 23 at Kelso High School. Johnson had a big day at the service line on her way to recording nine aces for the Hilanders.