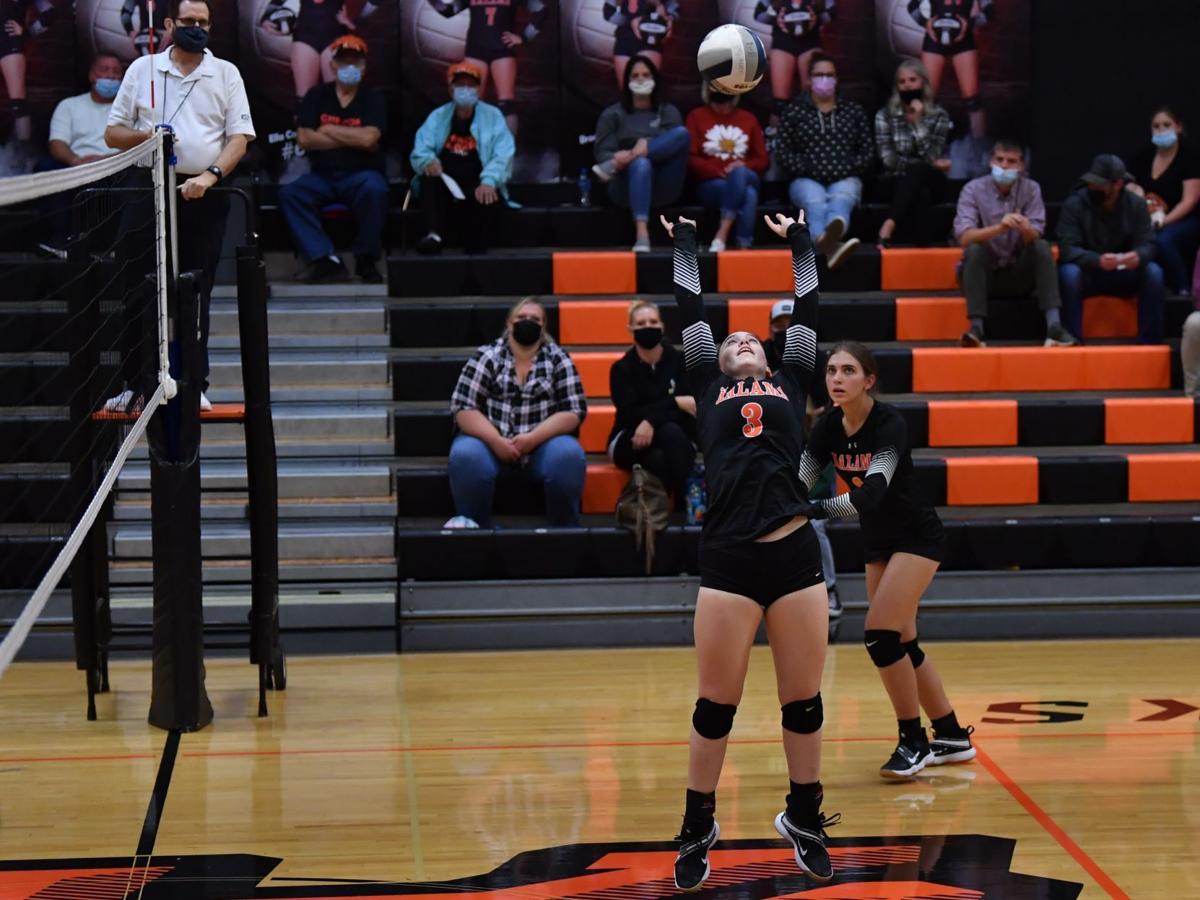 Kalama setter Rhegan O'Neil sets the ball back to the right pin in the first set of the Chinooks' sweep of Napavine at home on Sept. 20. O'Neil dished out 25 assists, had three dump kills, and three aces. 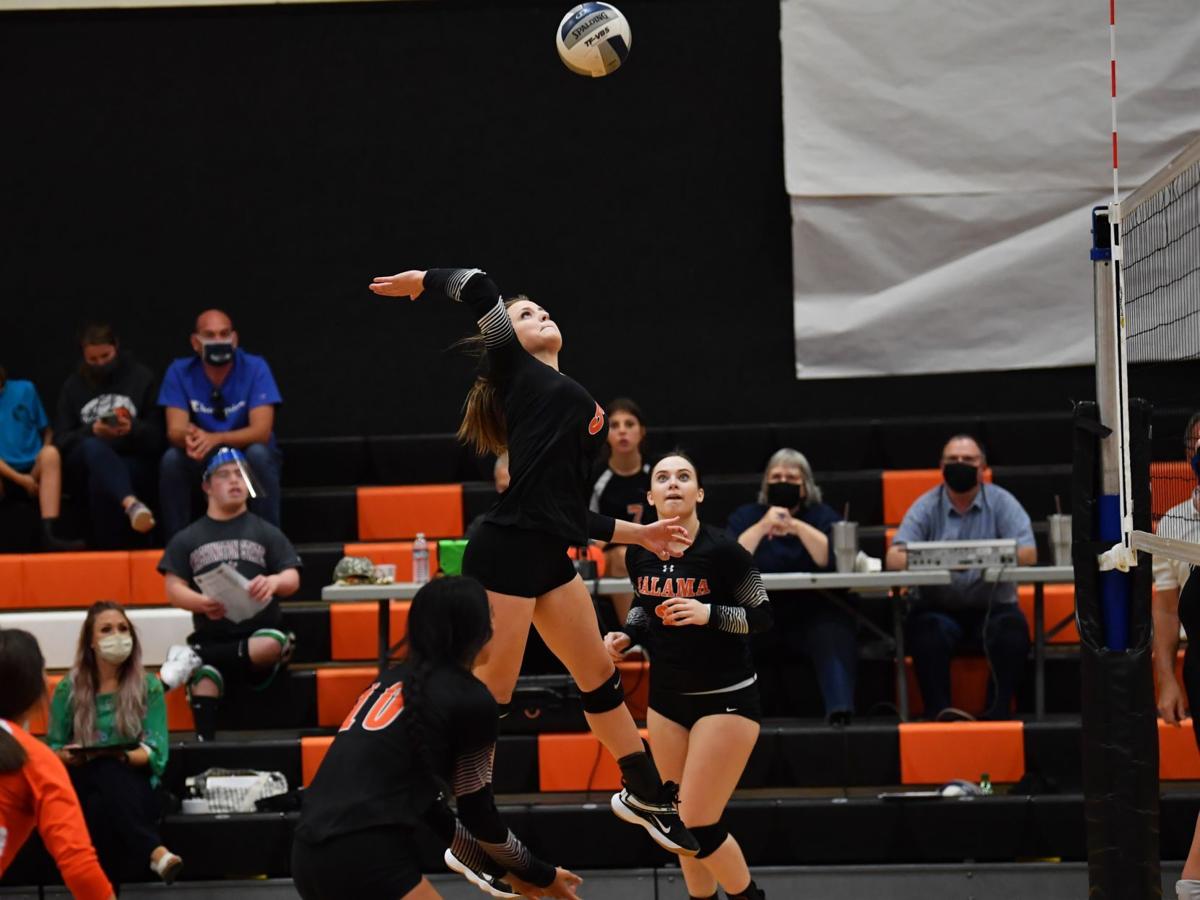 Kendal Collins goes up for a spike in the third set of Kalama's sweep of Napavine. Collins finished with seven kills and two aces. 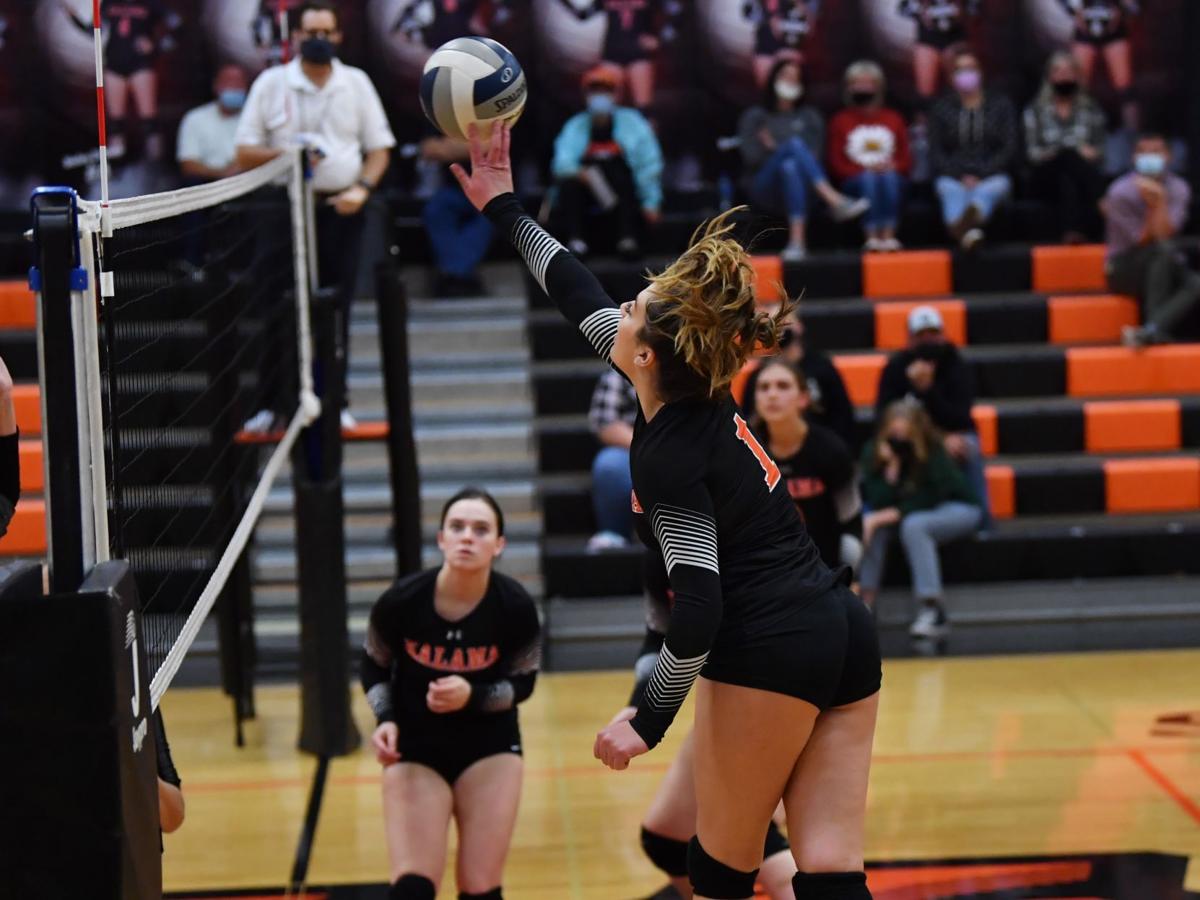 Paige Chinchen hammers a spike at the left pin during the first set of Kalama's sweep of Napavine on Sept. 20. Chinchen led the Chinooks with 10 kills.

KALAMA — The Kalama volleyball team had an easy time against an inexperienced and overmatched Napavine side starting its season late, sweeping the Tigers 25-10, 25-14, 25-9 on Tuesday in what was officially a non-league match.

All six Chinook hitters who saw the floor logged multiple kills on a night that let coach Jeni O’Neil shuffle around her lineup and see how deep her team could be. That included the first varsity start for junior Alena Ross, who finished with three kills on nine attacks and racked up a team-high seven digs.

“I’m just excited that we had to fill in gaps, with Alena — who had never played before in a varsity match — and people played out of position,” O’Neil said. “And everybody still did their job. When you only have eight, nine kids on a varsity team who are versatile, it really is comforting that if there’s an illness, or G0d-forbid an injury, our team is ready to fill in. That’s what I’m taking from tonight.”

Senior Paige Chinchen led Kalama with a match-high 10 kills, while Kendal Collins had seven. In the middle, Ella Capen tipped and rolled her way to four kills on a .500 hitting percentage. Alvina Gerega and Irene Martinez — the latter of whom only appeared in the third set despite normally starting — each finished with a pair.

“We have our big hitters; we’ve got Paige and we’ve got Kendal, and Rhegan (O’Neil) does a good job of moving the ball around,” Coach O’Neil said. “But later in the season, when we get to Districts and State when it really matters, we need those other girls to step up and be a part of the offense. Tonight allowed us the opportunity to see what we have to look forward to.”

Even Rhegan O’Neil got in on the offense, dumping over three second-touch kills. That was part of an all-around solid night for the junior setter, who dished out 25 assists and served nearly a perfect set by herself, putting down three aces and no errors on 24 serves.

“She’s competitive, she’s got the competitive edge,” Coach O’Neil said of her setter and daughter. “I think playing the preseason and playing those tough matches has gotten her really excited. We do go home and watch game film and pick it apart, so she never gets out of that volleyball mode, which can be good and bad sometimes. But she’s going into her junior, senior year, and she wants a trophy, and it’s important for her. She’s kind of taken on that leadership role, running that offense.”

Chinchen also had three aces, and Collins and freshman Libero Taylor Hoggatt both had two.

Napavine struggled to get any offensive rhythm going the whole match, and Kalama took advantage. The Chinooks jumped out to a 13-2 lead in the first set, a 12-5 one in the second, and a 15-4 one in the third, all of which continued as the set went on.

The easier win was welcome for Kalama, which opened its season with five matches in the first nine days of the season — four of which came against 1A or 2A schools.

“I think it’s definitely given us an outlook on what we can accomplish,” O’Neil said. “We’ve taken those bigger schools to four or five sets, we’ve had to rise. I think that playing those tough teams to start off is the way to go, because it gives us an opportunity to learn and grow early, so we’re prepared when it really counts.”

But the road will only get faster before it slows down; Monday’s win was the first of four gamedays for the Chinooks this week. Kalama (4-2) will host Wahkiakum on Tuesday, make the long drive to Stevenson on Thursday, and wrap up its week at Mark Morris’ tournament Saturday.

KELSO — Michelle Mury had had enough of the slow third sets for her Kelso volleyball team. Thursday night, she got ahead of the problem; despi…

In terms of volleyball, Mark Morris will have bragging rights until next season as they finished off the season sweep of the R.A. Long Lumberj…

BRUSH PRAIRIE — After a few weeks of working around injuries and other absences, the Mark Morris volleyball team had its whole gang together, …

CAMAS — The Kelso volleyball team got itself two-thirds of the way to a sweep before deciding to make things interesting at Union, ultimately …

CLATSKANIE — The Clatskanie volleyball team needed a win to keep its postseason dreams alive, and the Tigers did just that, beating Taft 25-12…

Kalama setter Rhegan O'Neil sets the ball back to the right pin in the first set of the Chinooks' sweep of Napavine at home on Sept. 20. O'Neil dished out 25 assists, had three dump kills, and three aces.

Kendal Collins goes up for a spike in the third set of Kalama's sweep of Napavine. Collins finished with seven kills and two aces.

Paige Chinchen hammers a spike at the left pin during the first set of Kalama's sweep of Napavine on Sept. 20. Chinchen led the Chinooks with 10 kills.