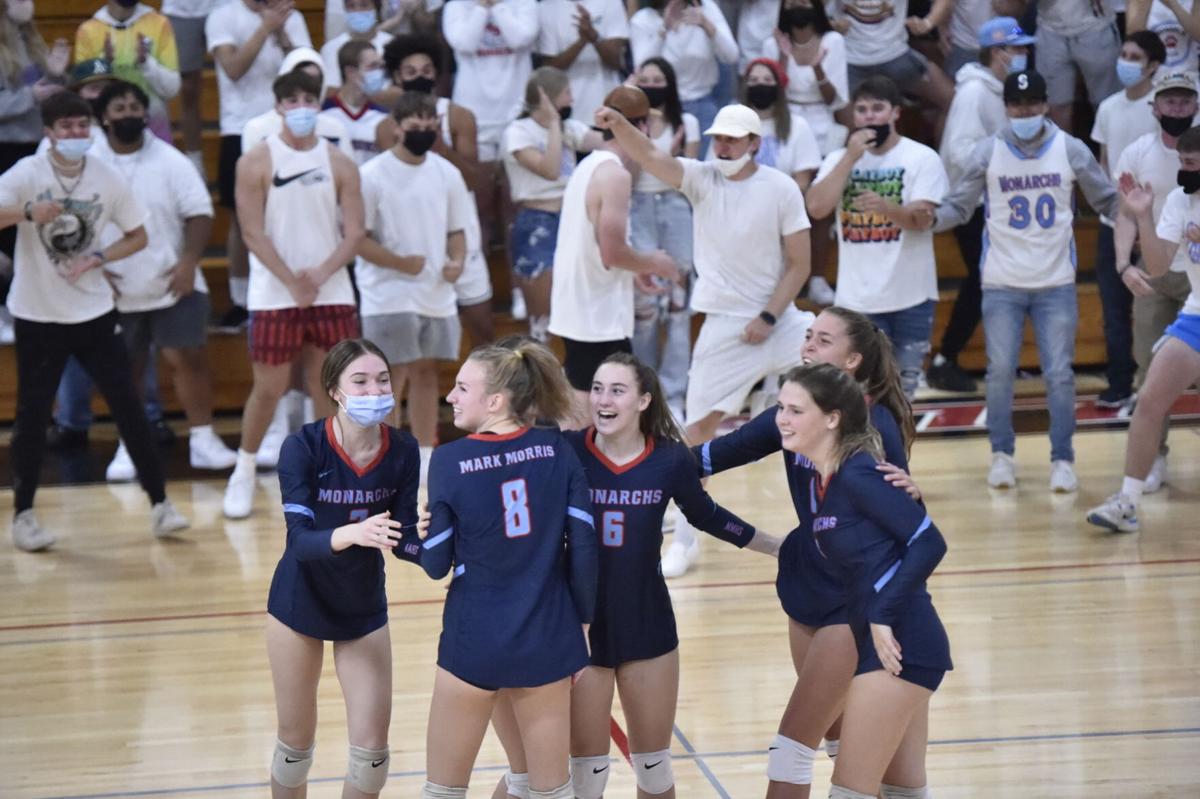 The Mark Morris team gathers to celebrate winning a tightly-contested third set 28-26 over R.A. Long in front of their white-clad student section on Tuesday, Sept. 21, at R.A. Long High School. 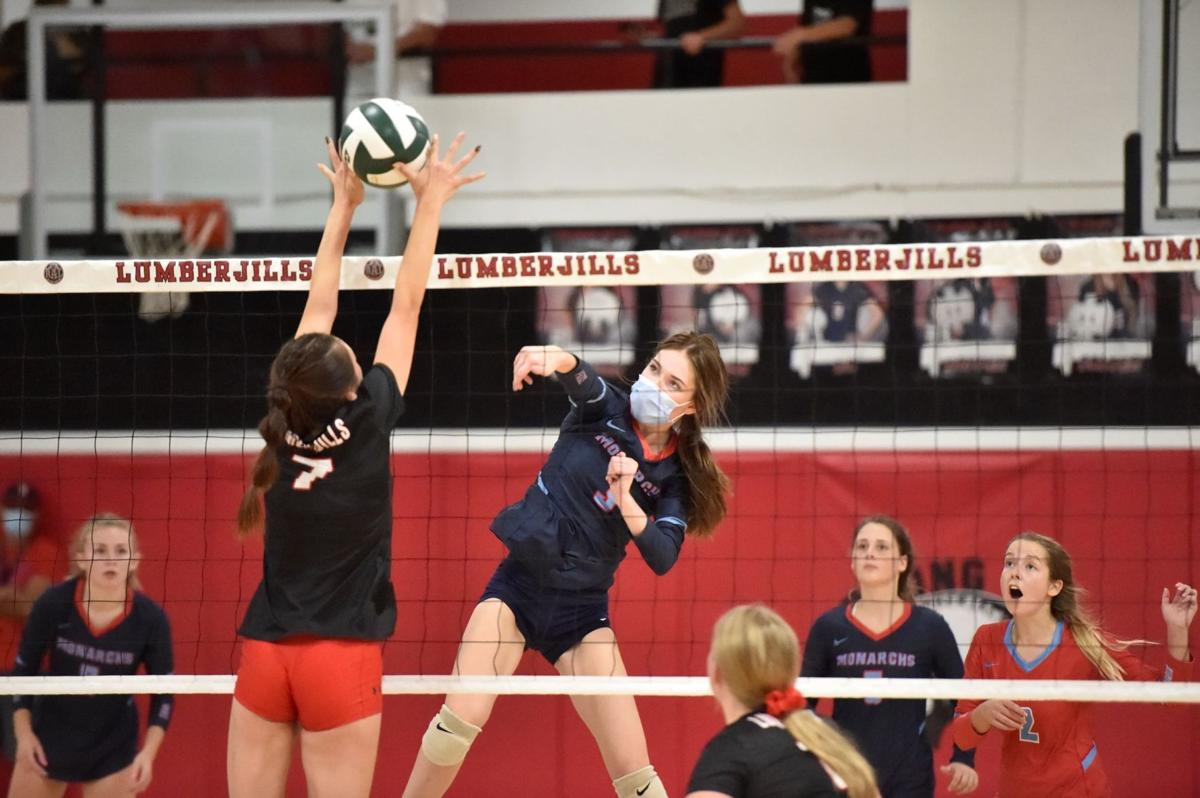 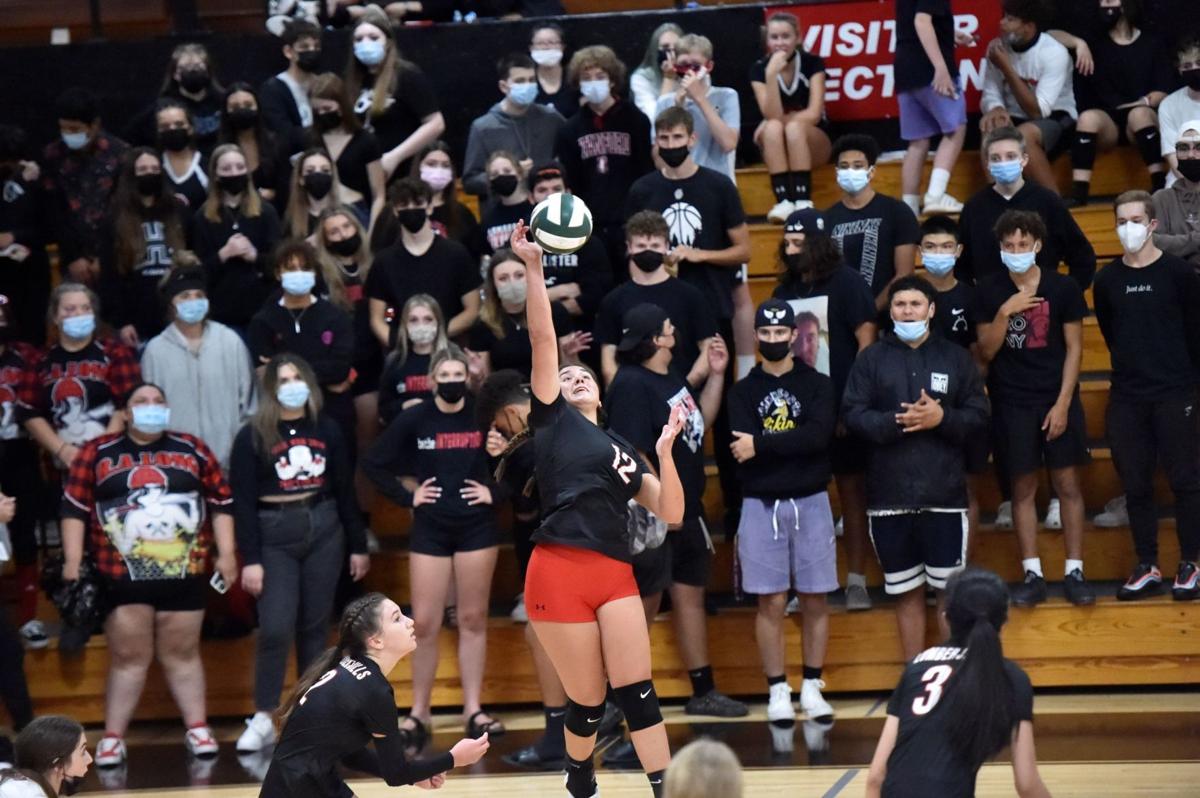 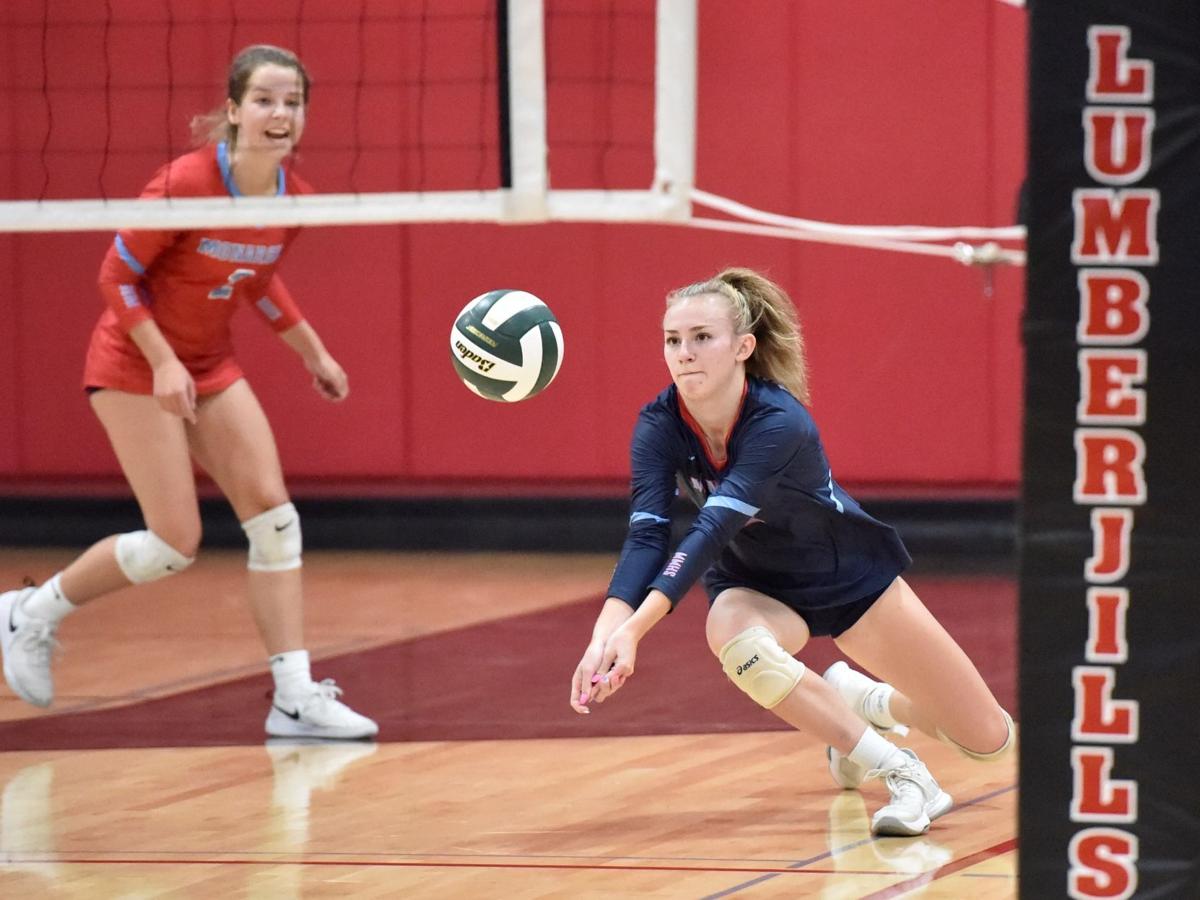 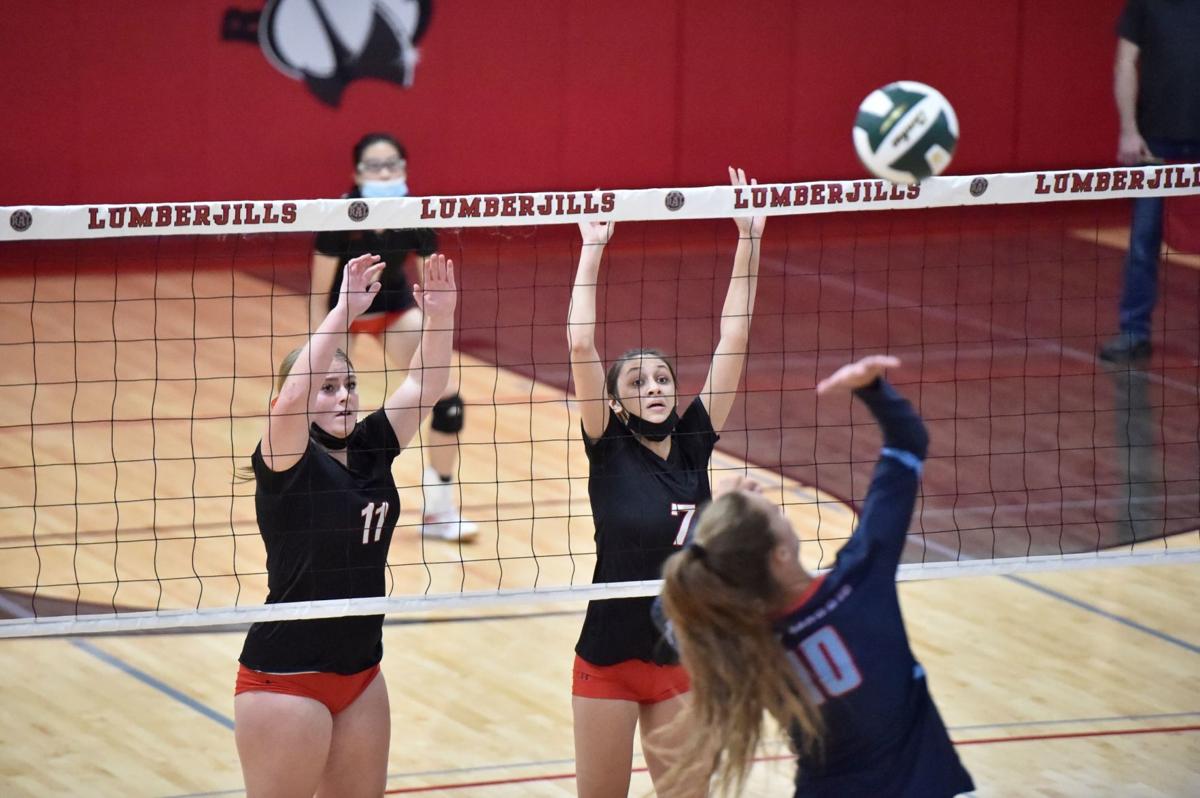 It felt like a rivalry at the Lumberdome on Tuesday. After empty gyms and stadiums were the story of the shortened winter and spring seasons, the Lumberdome felt like its old self whenever Mark Morris makes the trip across Lake Sacajawea to take on R.A. Long.

Gone were the awkward echoes ringing through the near-empty bleachers. Instead, it was the Monarch students — dressed head-to-toe in white — emphasizing each of their big attacks with a raucous “Boom!” as their classmate took a big swing.

Or it was the Lumberjill supporters — appropriately opposing MM by wearing all black — going wild and shaking the bleachers when the Jills managed to return a seemingly impossible attack from the Monarchs.

“It’s always a crazy atmosphere when you play in a rivalry game, you never know what’s going to happen,” MM coach Carmen Hewitt said. “I think both teams played well and I’m just really proud that the girls were able to fight through with the atmosphere.”

RAL coach Whitney Nailon was also impressed with the showing of support for her Jills squad.

“That was the best student section we’ve had in years, period. Hands down,” Nailon said. “How cool for both teams to have community support like that again?”

The performance was also potentially record-breaking for two Monarch players. Ali Millspaugh was credited with a nearly unfathomable 25 blocks, which Hewitt believed was the most in school history off the top of her head. Madi Noel was also returning everything the Jills sent her way as she finished the night with 79 digs, another presumed school record according to Hewitt.

“I thought our defense did really well,” Hewitt said. “Madi was digging everything. Hallie Watson did an amazing job with her digs as well. They work rally well back there together.”

The Monarchs needed the big performances to fend off the Jills. After MM took control with a first-set win, R.A. Long won a tightly played second set by the skin of their teeth. Neck-and-neck the entire set, Nailon called a timeout with the scored tied at 23 and told her team it was go time.

“We’ve got to stop talking about it and do it,” Nailon said she told her squad. “We talk about opportunities a lot. You don’t get another opportunity.”

The Jills took the advice and scored three of the next four points to even the match, but things wouldn’t get any easier.

The third set was more of the same, both teams refusing to let up or give the other the advantage. Although this time, it was the Monarchs that were able to find the consecutive points necessary to take control of the match and break the tie.

More late-game timeouts gave Hewitt a chance to reiterate their focus to her team.

After the Monarchs closed out the third and the students went crazy again, it was clear the momentum had shifted as if the balloon around the Lumberdome popped and let out all of the energy.

As the Monarchs took control in the fourth to secure the win, the sound in the gym dimmed, but the excitement afterward was still palpable.

“R.A. Long is a great team,” Hewitt said. “They’re that sleeper team that’s going to sneak up on you and they’re going to do great things this year. They are a fantastic adjustment team and they adjusted to what we were doing, so it took us a bit to adjust what we were doing to what they were doing and once we did it made a difference.”

Despite the loss, the pride could be seen on Nailon’s face after the game, even while wearing her mask.

“We executed everything we talked about,” she said. “We’re working very hard on coverage. Our league is very tough defensive blocking-wise and we did such a great job with coverage and trying to get them out of system, which we did.”

In addition to the Monarch record-setters, Emma Fisher and Ellie Weber controlled the attack for MM. Fisher led the team with 13 kills while Weber saw a higher usage-rate and finished with 11. MM setter Kendall Blondin, who herself finished with 42 assists, seemed to look to work the ball through Weber first to create better looks for the rest of her team.

“Ellie just provides power,” Hewitt said. “When you get those really feel-good kills, it amps everyone up and she’s really good at that. She’s one of our captains, she gets us fired up always and when she can bring her A-game, it opens up a lot more of our options.”

For R.A. Long, it was Kamia Tootoosis-Didier that was turning heads in the gym with her performance. Tootoosis-Didier finished with a game-high 18 kills and added 10 digs for the Jills on the defensive end. In addition to a .483 hitting percentage, she also finished with a 2.5 serve-receive average, topping off her effective, well-rounded night as she led RAL.

“I coached Kamia in club when she was little, her sister played for me, and it’s just so cool to see her come out with real, big fans and put on a show,” Nailon said.

Y Ta also added 10 kills for the Jills and Jorden Williamson led the team with 20 digs. Miranda Berquist set her teammates up for success with 36 assists on the game.

Mark Morris (6-0) will put its perfect record on the line at home on Thursday against Columbia River.

VANCOUVER — Woodland took care of business on the road on Tuesday as they needed just the minimum three sets to finish off Fort Vancouver 25-23, 25-19 and 25-10.

Tessa Traffie was in control on offense for the Beavers as she stepped into a larger role and finished with a team-best 16 kills on the game.

“Yes, she was definitely swinging smart and aggressive tonight,” Woodland coach Danielle Hudson said. “Also listening to her libero communicate where to swing and executing the game plan.”

Woodland (2-1) will be back home against Hockinson on Thursday.

The Mark Morris team gathers to celebrate winning a tightly-contested third set 28-26 over R.A. Long in front of their white-clad student section on Tuesday, Sept. 21, at R.A. Long High School.