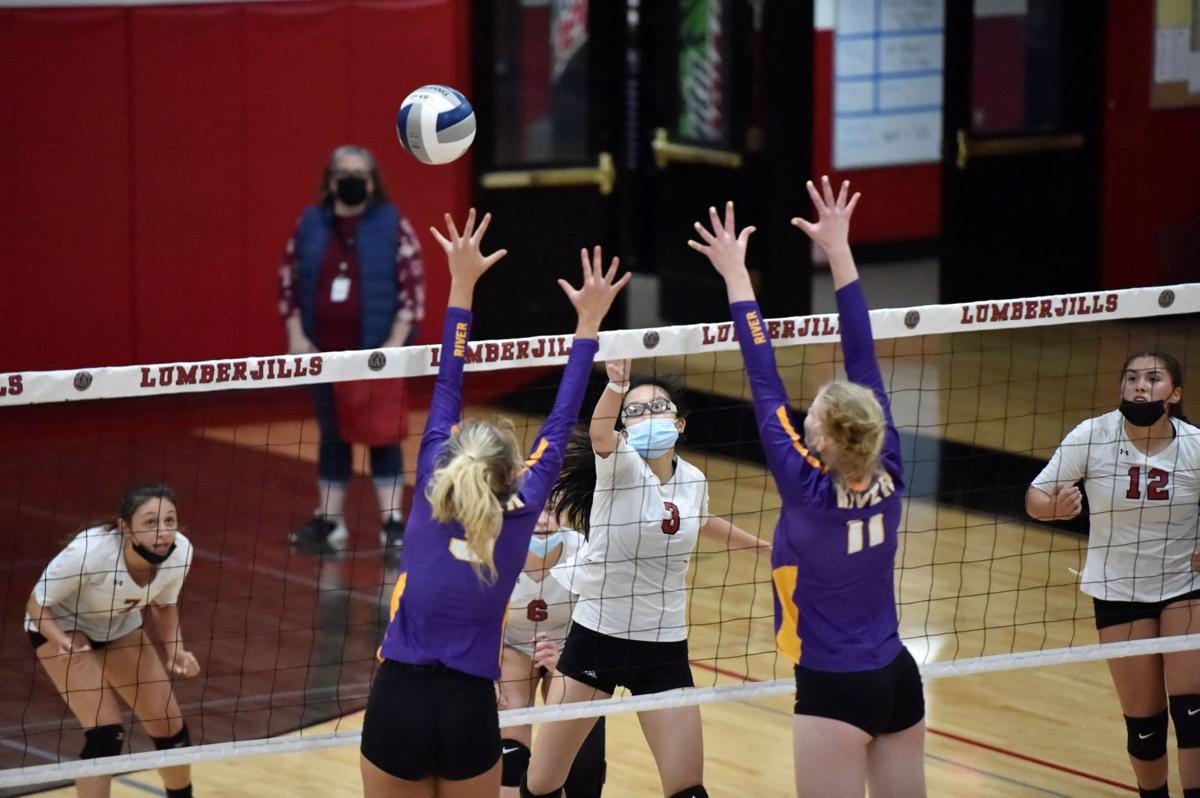 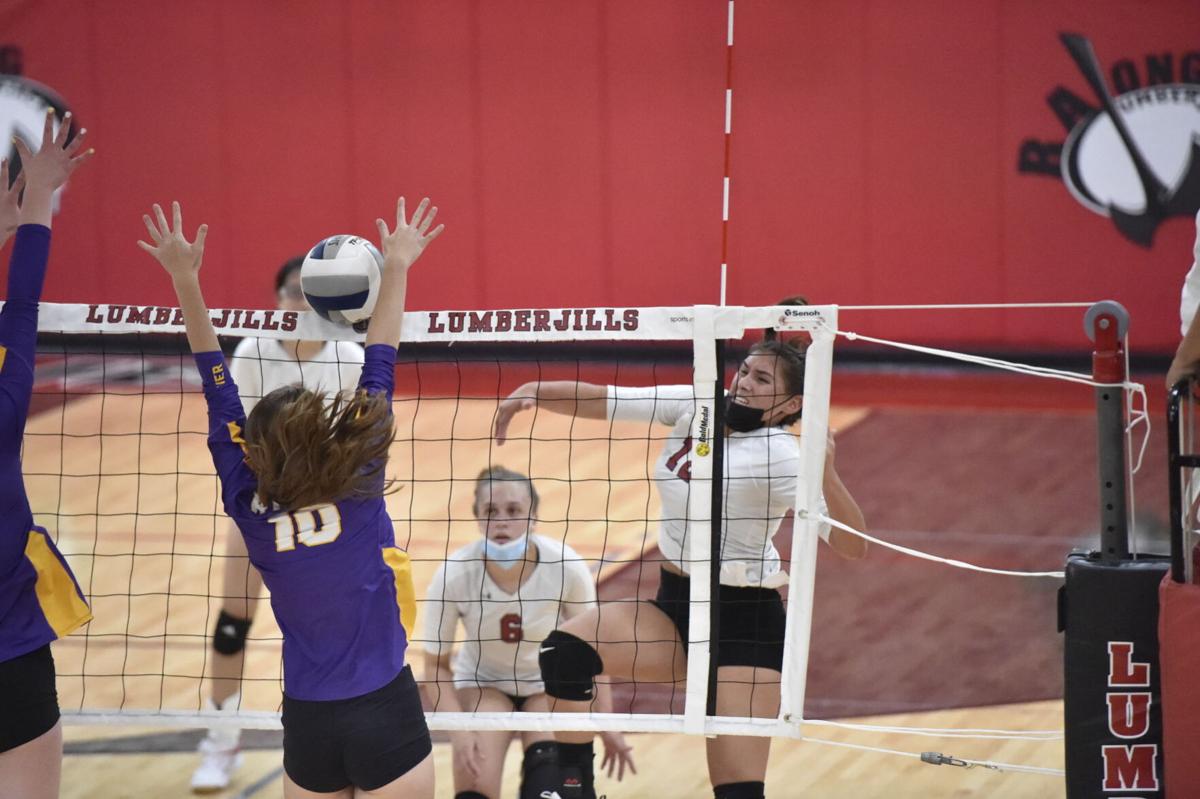 R.A. Long's Kamia Tootoosis-Didier (12) follows through on an attack to earn a kill on Tuesday, Sept. 14, at R.A. Long High School. 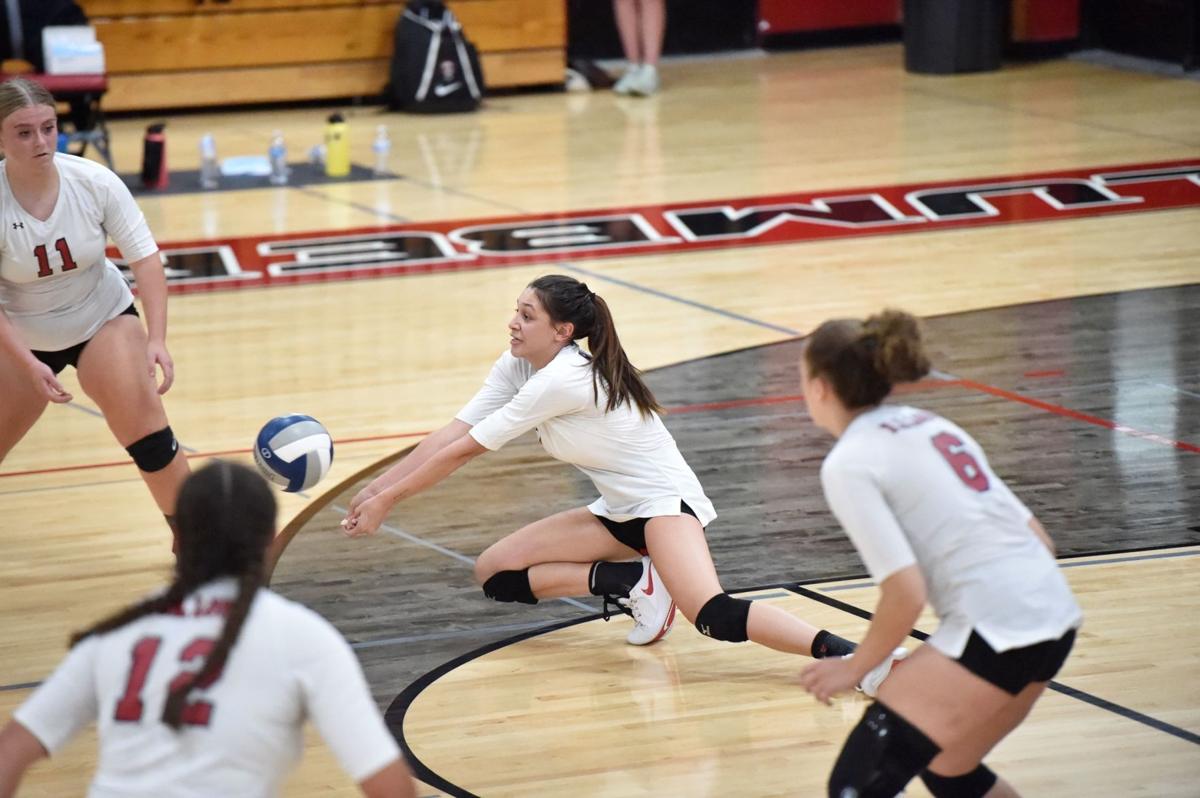 After picking up back-to-back wins without dropping a set to start the season, the R.A. Long volleyball team finally met resistance against a quality foe in the Columbia River Rapids at the Lumberdome on Tuesday night.

“To be honest, that team right there is the best team that I have played against in my whole time at R.A. Long,” R.A. Long coach Whitney Nailon said of the Rapids.

Columbia River used a strong attack led by some heavy hitters to sweep the Lumberjills 13-25, 13-25 and 14-25 in 2A Greater St. Helens League play.

Despite the sweep, Nailon came away with a positive outlook on the way her team stepped up against a quality opponent.

“I thought for a team of their caliber — we did fantastic,” she said. “I truly believe that.”

Columbia River jumped out front early in the first two sets. The Rapids relied on their strong attack to keep the Jills on their heels on defense, forcing RAL to make quick reads to keep them out of sorts.

“We need to get wider on defense and I thought we definitely have an opportunity to improve on reading a little bit better and just being ready with our hands,” Nailon said.

The Jills came out with more intensity in the third set as they tried to take back some of the momentum the Rapids had built across the first two sets. But every time the Jills seemed poised to take control and steal a set, the Rapids managed to stem the tide and get back to their game plan.

The turning point in the final set came with the Jills up 14-12. The side judge ruled a ball in play, though the RAL players disagreed. After a discussion with the head official, the Rapids were still given the point and the Jills couldn’t recover.

“We didn’t respond from that,” Nailon said. “Some plays in volleyball are momentum killers and that play unfortunately was the momentum killer for us and we didn’t bounce back.”

The Rapids finished the set on a 13-0 run to end the game after the disputed point.

“When we watch film…we’ll be able to see that and game plan better next time for that,” Nailon said. “It’s one point, but boy, one point in volleyball really makes a difference.”

The Rapids gave RAL some new looks and paired it with their big hitters. Nailon was pleased with the way her squad responded.

“We covered, we blocked and we saw things we haven’t seen yet,” She said. “It just gives us a lot of opportunities to get better for Thursday.”

After little resistance in their season-opening sweeps, the tough competition from the Rapids gave Nailon a chance to see her team under duress for the first time this season.

“They can battle and they can compete,” Nailon said of what she learned about her team. “We need to be more mentally tough when we go against those big bangers like them, but we can hang with the stronger offensive teams like that.”

Though the offense can keep up, Nailon said the focus will be on making sure they get the opportunities to keep pace with high-powered teams.

“We are going to focus on defense and we’re going to get our hitters some great swings tomorrow at practice,” Nailon said.

Kamia Tootoosis-Didier was a “powerhouse on the hitting” for the Jills and led the offense with nine kills.

Y Ta added four kills for RAL and finished with a team-high five blocks at the net, finishing with a .307 average on offense.

“Y Ta started hitting the snot out of the ball at the end,” Nailon said. “She had our best hitting average.”

Danni Hopper was also a standout for the Jills, leading the squad with seven digs and adding four blocks in a strong defensive showing.

“We didn’t set Danni as much as I would’ve liked in the middle, but Danni did a great job for us in just overall court presence,” Nailon said.

KELSO — Coming off back-to-back losses, Kelso volleyball coach Michelle Mury knew it was time to make some changes as they came back home to p…

MOSSYROCK — Toutle Lake picked up a hard fought non-league victory on the road against Mossyrock on Wednesday. The Ducks dropped the first set…

2B Volleyball roundup: Chinooks pick up pace in sweep

STEVENSON — The Kalama volleyball team had to make the long trip southeast to Stevenson on Thursday, which may have accounted for a closer fir…

VANCOUVER — With no C-team or JV match to precede it, the R.A. Long volleyball team’s matchup with Hudson’s Bay got moved up to 6 p.m., and th…

1A Volleyball: Rockets win in four

R.A. Long's Kamia Tootoosis-Didier (12) follows through on an attack to earn a kill on Tuesday, Sept. 14, at R.A. Long High School.