Become a Member
Read Today's E-edition
Share This
2A State Volleyball: Monarchs come alive against Ephrata
0 comments
Share this
1 of 3 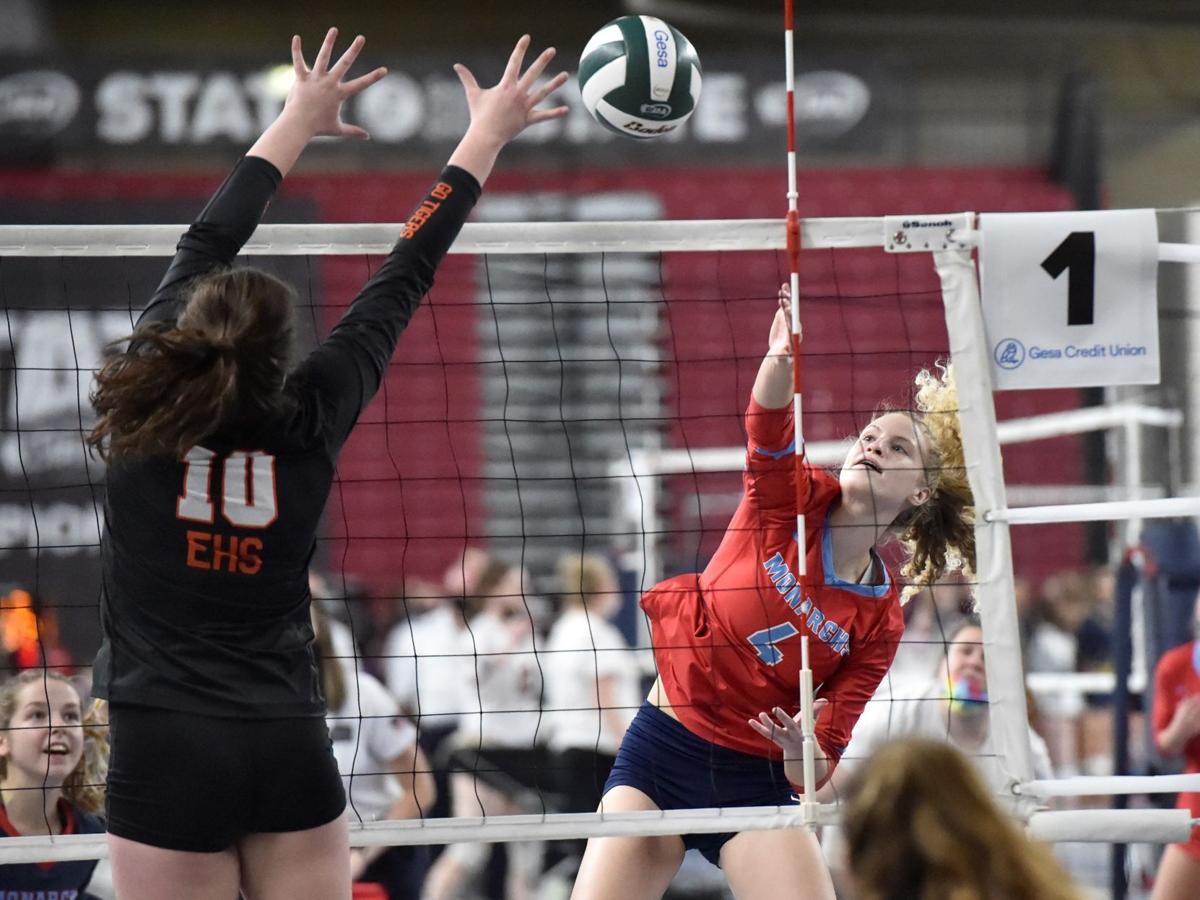 Mark Morris' Ellie Weber spikes the ball against Ephrata during the 2A WIAA State Tournament on Friday, Nov. 19, at the Yakima Valley SunDome. 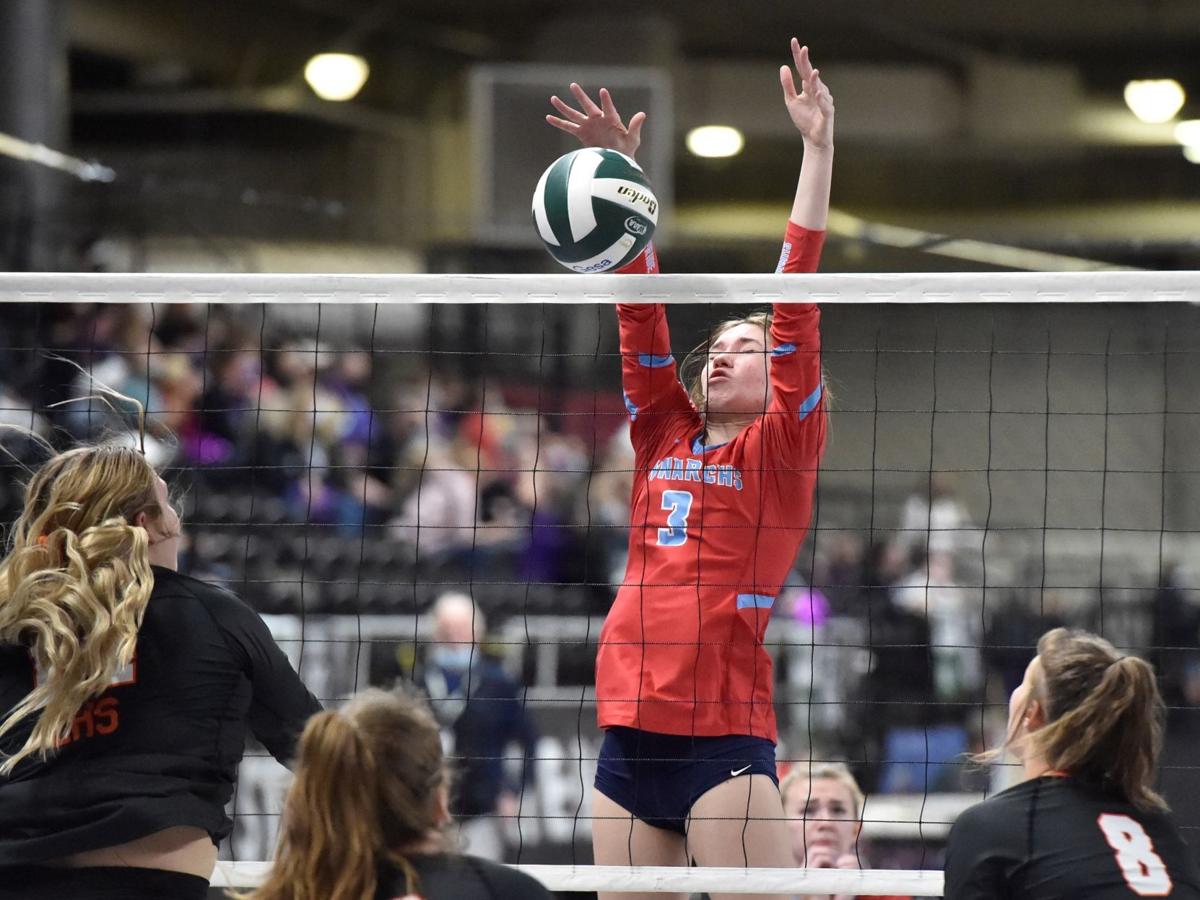 Mark Morris' Ali Millspaugh braces as she blocks an attack from Ephrata on Friday, Nov. 19, at the Yakima Valley SunDome. 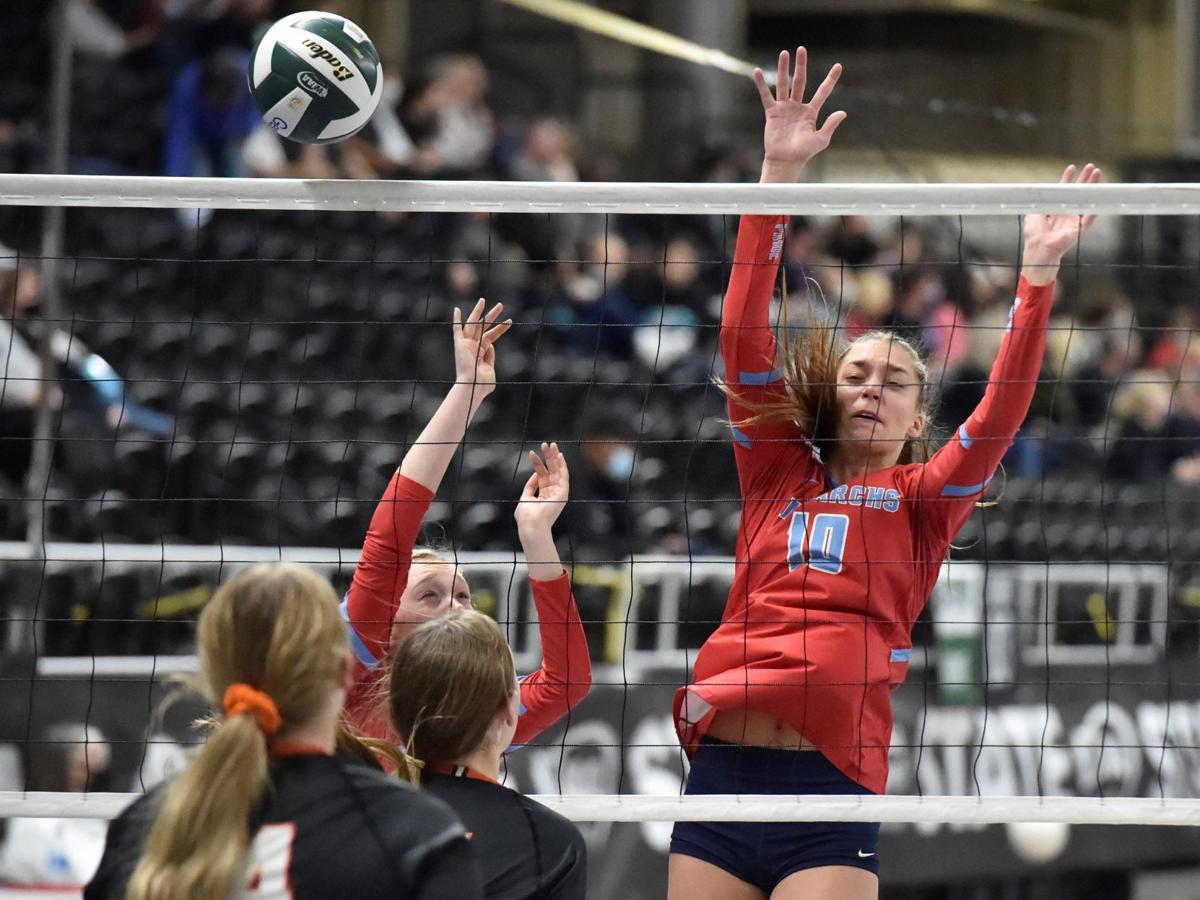 Mark Morris' Reagan Wilkinson reacts after blocking a spike from an Ephrata player on Friday, Nov. 19, at the Yakima Valley SunDome.

YAKIMA — Things looked a bit shaky for Mark Morris in the opening set of an elimination game against Ephrata at the 2A WIAA State Tournament on Friday, but the Monarchs rebounded in a big way and took three straight to beat the Tigers in four, 15-25, 25-20, 25-8, 25-15.

The 16th-seeded Monarchs stay alive and take down No.8 Ephrata, sending a message to other teams at the tournament not to overlook them just because of the number next to their name.

After dropping the opening set to an energetic Ephrata squad, MM coach Carmen Hewitt gave her team a call to action.

“I told them this could be it for us so however you play in this match, we’ve got to sit on that for a year, so end proud,” Hewitt said. “And they did. They came back and took it one point at a time. I feel like they made a statement there.”

In order to turn the tables, the Monarchs had to stop playing it safe and take full advantage of the looks they got on the offensive end.

“In that first set we were tipping a lot and that seems to be our story,” Hewitt said. “When we play safe and tip and try to play what we think is a smarter game — we’re less aggressive. I told them ‘You’ve got to swing. If we’re going to go out, go out swinging.”

The Monarchs answered. They broke away on an 8-2 run to help best the Tigers in the second set, then they dominated the third set by finishing on a 16-2 run. The energy on the Mark Morris bench was met by blank stares from an Ephrata team that was still trying to figure out what just hit them.

The Monarchs sealed the deal after jumping out to a 13-4 lead in the fourth set, keeping their State run alive with eyes on walking home with a trophy.

“We played well this morning so I think that we just got to get some rest tonight,” Hewitt said. “We’ve got to remember how tonight felt and what we did tonight to allow us to be successful and come out with that from point one tomorrow morning.”

Kendall Blondin picked up 31 assists for the Monarchs and Madi Noel led the team with 36 digs in the back row.

Mark Morris is back in action on Saturday as they can still place as high as seventh with two wins on the final day of the tournament. Up first is Washington High School at 9:45 a.m.

YAKIMA — It all finally came together for the Kelso Volleyball games. After inconsistencies and dropped sets throughout the 3A WIAA State Tour…

Previewing the 2A and 3A state volleyball tournaments, and the local schools going

Don’t look now, but the fall season is coming to its twilight. The three smaller classifications wrapped up volleyball in one fell, chaotic sw…

2A State Volleyball: Mark Morris takes down Washington in four

Editor’s note: Mark Morris beat Enumclaw in four sets to earn seventh place at the State Tournament on Saturday night. A full recap of that ga…

YAKIMA — The Kalama volleyball team had an up-and-down second-round game, but one stellar outing on the other side of the net was enough to tu…

1B State volleyball: Comets grind out fifth-place in State with pair of marathons

YAKIMA — The Naselle volleyball team came into Friday knowing it had a maximum of two games left in its season — at most 10 sets.

Mark Morris' Ellie Weber spikes the ball against Ephrata during the 2A WIAA State Tournament on Friday, Nov. 19, at the Yakima Valley SunDome.

Mark Morris' Ali Millspaugh braces as she blocks an attack from Ephrata on Friday, Nov. 19, at the Yakima Valley SunDome.

Mark Morris' Reagan Wilkinson reacts after blocking a spike from an Ephrata player on Friday, Nov. 19, at the Yakima Valley SunDome.