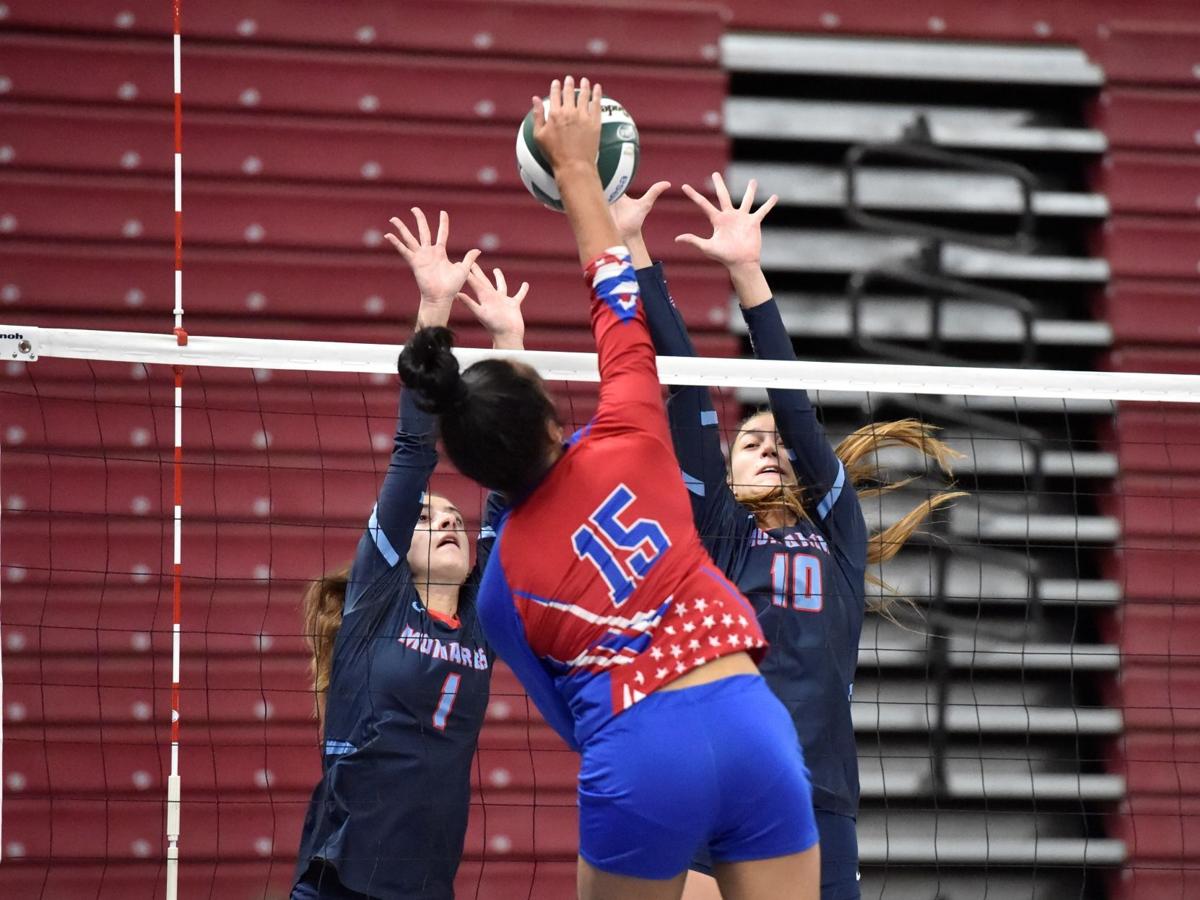 Mark Morris' Kendall Blondin (1) and Reagan Wilkinson (10) pinch together to make a block against Washington during the 2A WIAA State Tournament on Saturday, Nov. 20, at the Yakima Valley SunDome. 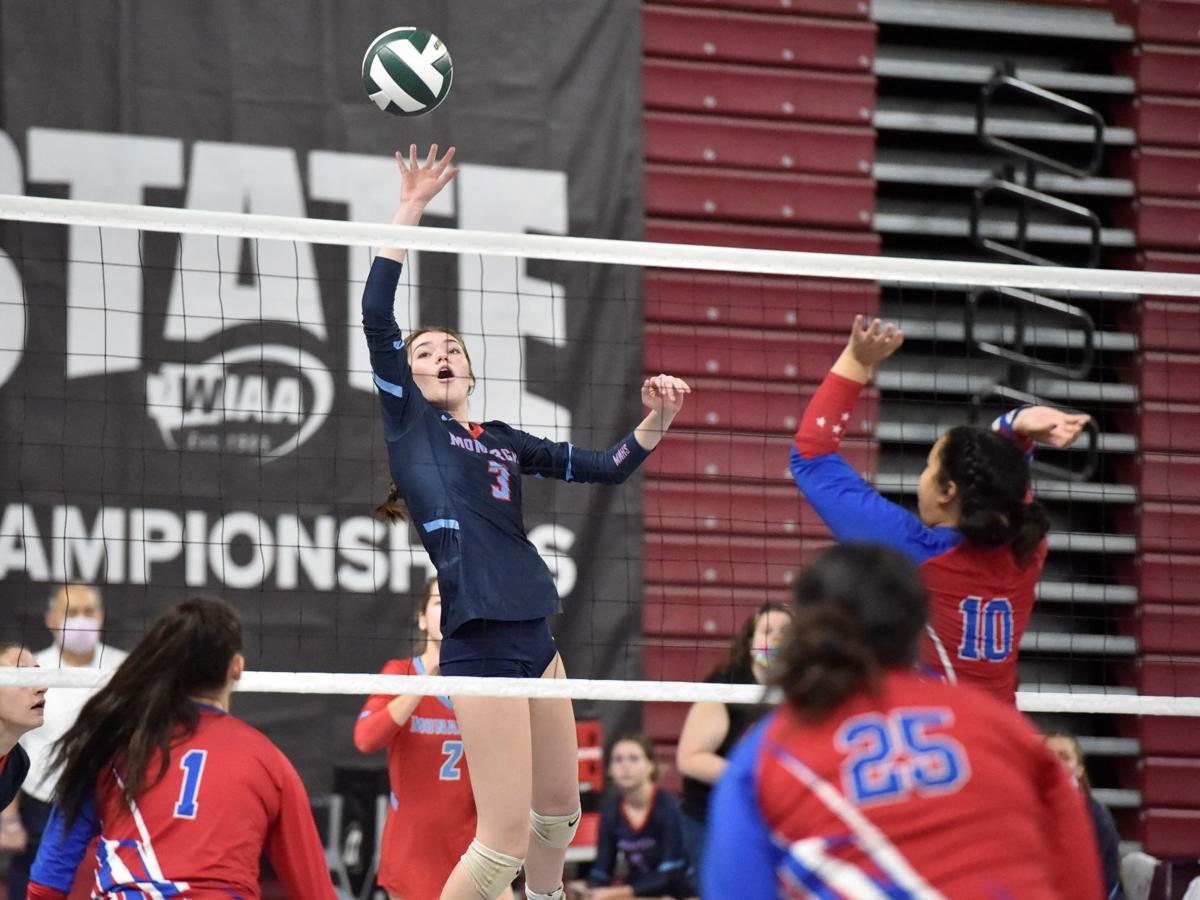 Mark Morris' Ali Millspaugh reaches up to steer the ball away from Washington defenders on Saturday, Nov. 20, at the Yakima Valley SunDome. 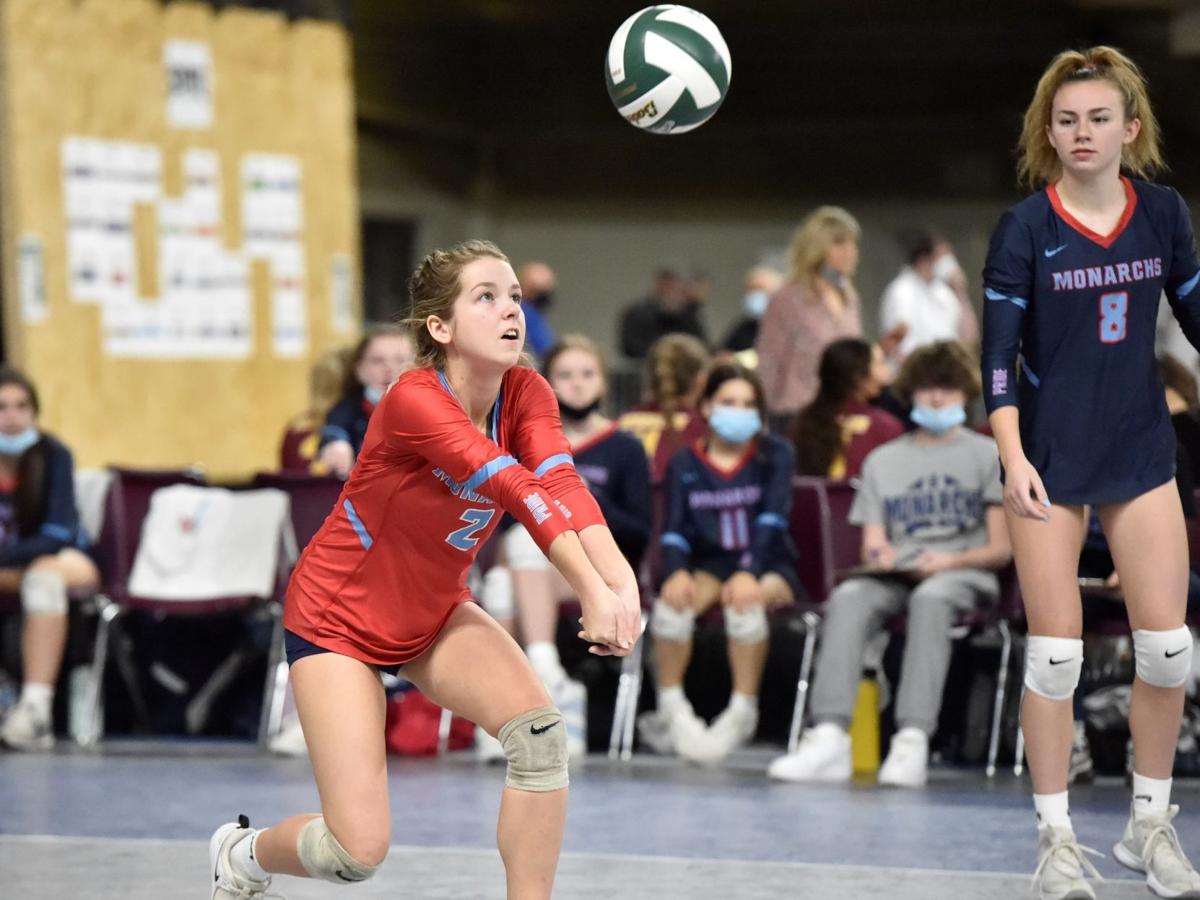 Mark Morris Libero Madi Noel returns a serve while Emma Fisher looks on against Washington on Saturday, Nov. 20, at the Yakima Valley SunDome. 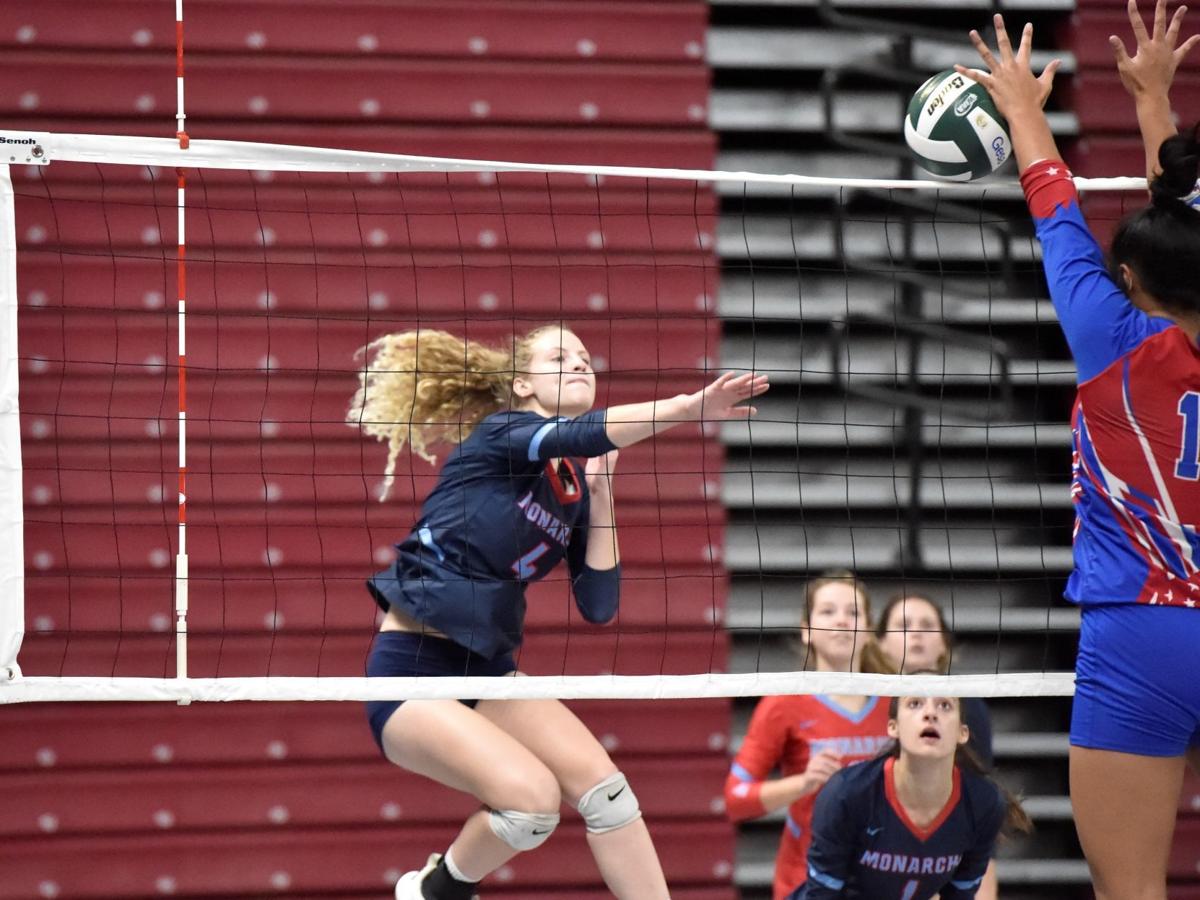 Mark Morris' Ellie Weber follows through on an attack against Washington on Saturday, Nov. 20, at the Yakima Valley SunDome.

Editor’s note: Mark Morris beat Enumclaw in four sets to earn seventh place at the State Tournament on Saturday night. A full recap of that game will be available online at tdn.com/sports/high-school.

YAKIMA — The Mark Morris volleyball team checked another name off its list as they continue to blaze a path to prove themselves after getting the 16th seed at the 2A WIAA State Tournament. After knocking off No. 8 Ephrata last night, the Monarchs downed the No. 5 Washington Patriots in four sets (23-25, 28-26, 25-19, 25-21) on Saturday at the Yakima Valley SunDome.

“It feels really good,” Mark Morris coach Carmen Hewitt said. “The girls felt disrespected coming into this tournament. We have a tough league, a real tough league, and we played (No. 1) Columbia River and (No. 3) Ridgefield really tough in the regular season so they felt disrespected coming in and they had something to prove and I think they proved it.”

For the second straight game, the Monarchs started slow out of the gates and dropped the opening set only to rally and win three in a row to pick up a win.

“They like to scare me with that first set a little bit, but it’s a fun time,” Hewitt said. “They played overall really, really great today.”

Emma Fisher took charge of the Monarchs’ offense, rattling off 19 kills on the match. Fisher has been forced to carry a hefty workload as teams have been keying on Ellie Weber.

“I think everyone knows Ellie, she’s our only senior,” Hewitt said. “They tend to double block her off the bat and she gets big swings for us. Emma is that sneak attack. She is probably the smartest player I have ever coached. She just has a gift of finding the hole and knowing where to put that ball. That’s why I have her playing all the way around.”

Weber still managed to dish in 16 kills despite the increased focus and Ali Millspaugh added nine for the Monarchs. Kendall Blondin worked the ball around to MM’s attackers to the tune of 49 assists.

While the offense found its groove, Reagan Wilkinson made the Patriots work for every single point. Wilkinson finished the match with seven blocks and provided an important spark with back-to-back blocks as the Monarchs closed out the third set.

“Reagan Wilkinson stepped up for us today, she was a huge block for us and it was amazing,” Hewitt said. “It makes it really difficult (for opponents) and it allows us to control the net play. It just hypes us up and then our defense is able to let some spots go because they don’t have to worry about it, they know the block is going to do its job, so we’re able to cover more of the court.”

In addition to Wilkinson’s tough defense, Madi Noel led MM with 41 digs on the match. Fisher added 26 for the Monarchs and Hallie Watson added 25.

The Monarchs seemed tense in across the loss in the first set, much like they were against Ephrata on Friday.

“As long as we control our side, it doesn’t matter what the other side is doing,” Hewitt said she told her team after the opening set. “We are a great volleyball team, we just have to overcome the anxiety. We’re battling a lot of nerves in this situation. This is the first time we’ve been to State since 2012. These kids, they play club and they play in big tournaments all the time, but it’s another battle when you’re playing for your school and you want to do well for everyone.”

The Monarchs loosened up and found plenty of success after squeezing out a 28-26 win in the second that saw the Monarchs nearly lose a late lead.

“When they play with joy and they’re having fun and they’re loose it’s beautiful to watch,” Hewitt said.

“When they get tight and nervous it’s a whole different team.”

The early struggles were brought on in part by Washington’s ability to return some strong attacks from MM. But the Monarchs were ready for the long rallies and settled in to keep their focus and finish off points.

“I knew that they were a great defensive team and we prepared for that last night when we were preparing for today. We knew that we were going to have long rallies, but if we kept hitting and controlled our side and not hit it out and make those mistakes for them, we could eventually find a hole.”

Mark Morris took on Enumclaw with seventh place on the line on Saturday afternoon. The Monarchs already clinched their goal of placing at the tournament, but Hewitt said they were already hungry for seventh in the postgame huddle.

“It’s extremely vindicating,” Hewitt said of placing as the 16th seed. “We are very proud. We came into this saying whatever happens today we’re going to end proud, we’re going to play for the family and they did that.”

YAKIMA — It all finally came together for the Kelso Volleyball games. After inconsistencies and dropped sets throughout the 3A WIAA State Tour…

Previewing the 2A and 3A state volleyball tournaments, and the local schools going

Don’t look now, but the fall season is coming to its twilight. The three smaller classifications wrapped up volleyball in one fell, chaotic sw…

YAKIMA — The Kalama volleyball team had an up-and-down second-round game, but one stellar outing on the other side of the net was enough to tu…

1B State volleyball: Comets grind out fifth-place in State with pair of marathons

YAKIMA — The Naselle volleyball team came into Friday knowing it had a maximum of two games left in its season — at most 10 sets.

Mark Morris' Kendall Blondin (1) and Reagan Wilkinson (10) pinch together to make a block against Washington during the 2A WIAA State Tournament on Saturday, Nov. 20, at the Yakima Valley SunDome.

Mark Morris' Ali Millspaugh reaches up to steer the ball away from Washington defenders on Saturday, Nov. 20, at the Yakima Valley SunDome.

Mark Morris Libero Madi Noel returns a serve while Emma Fisher looks on against Washington on Saturday, Nov. 20, at the Yakima Valley SunDome.

Mark Morris' Ellie Weber follows through on an attack against Washington on Saturday, Nov. 20, at the Yakima Valley SunDome.