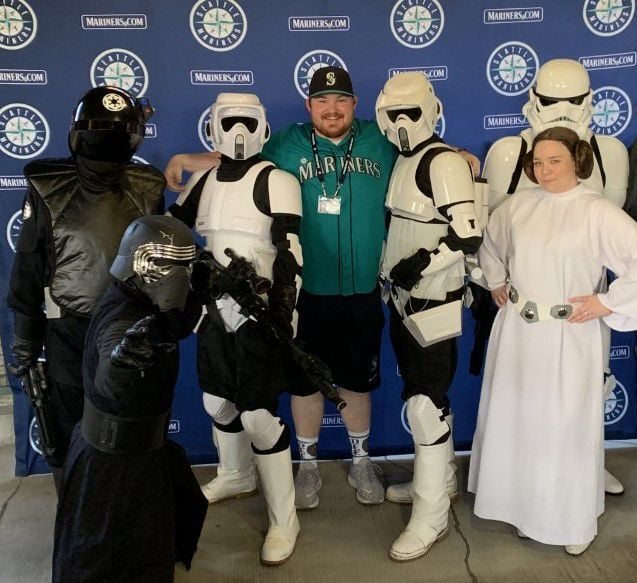 Mitchell Margaris poses with friends on both sides of the force during Star Wars night at T-Mobile Park. 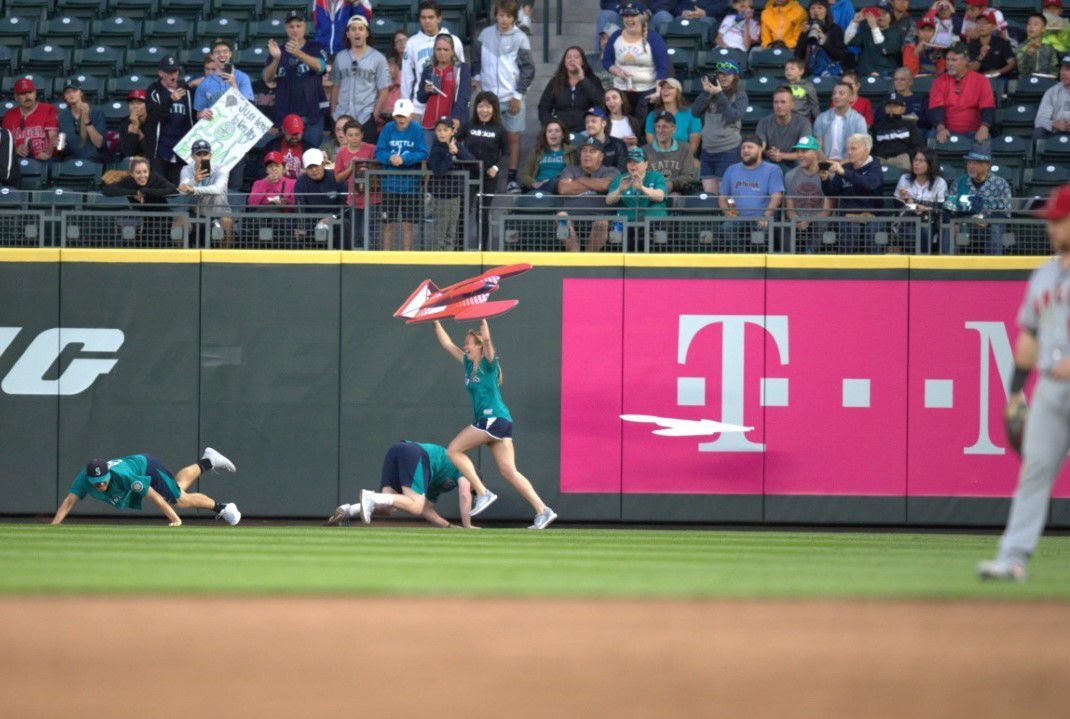 Mitchell Margaris (second from left) takes a tumble while manually running the hydroplane race at T-Mobile Park during a Mariners game. 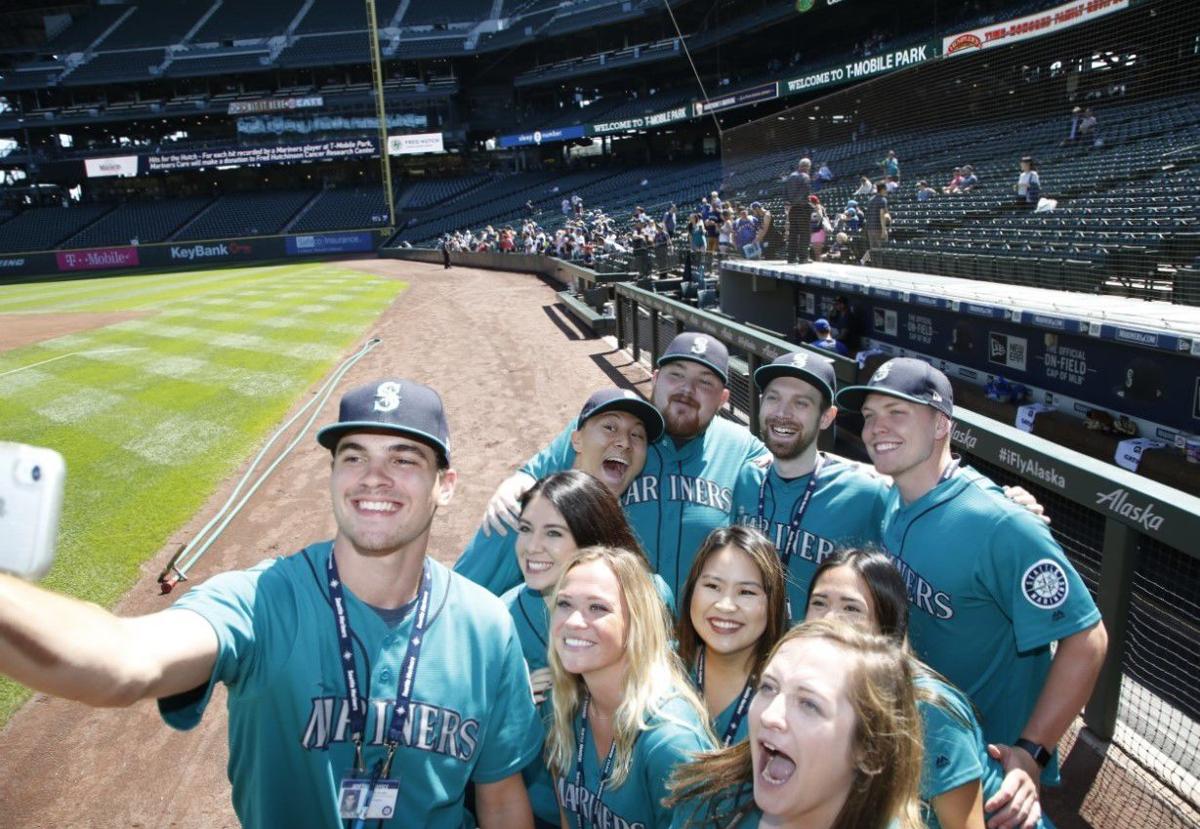 Mitchell Margaris (far left, back row) poses for a photo with the Navigators prior to a Mariners game at T-Mobile Park. 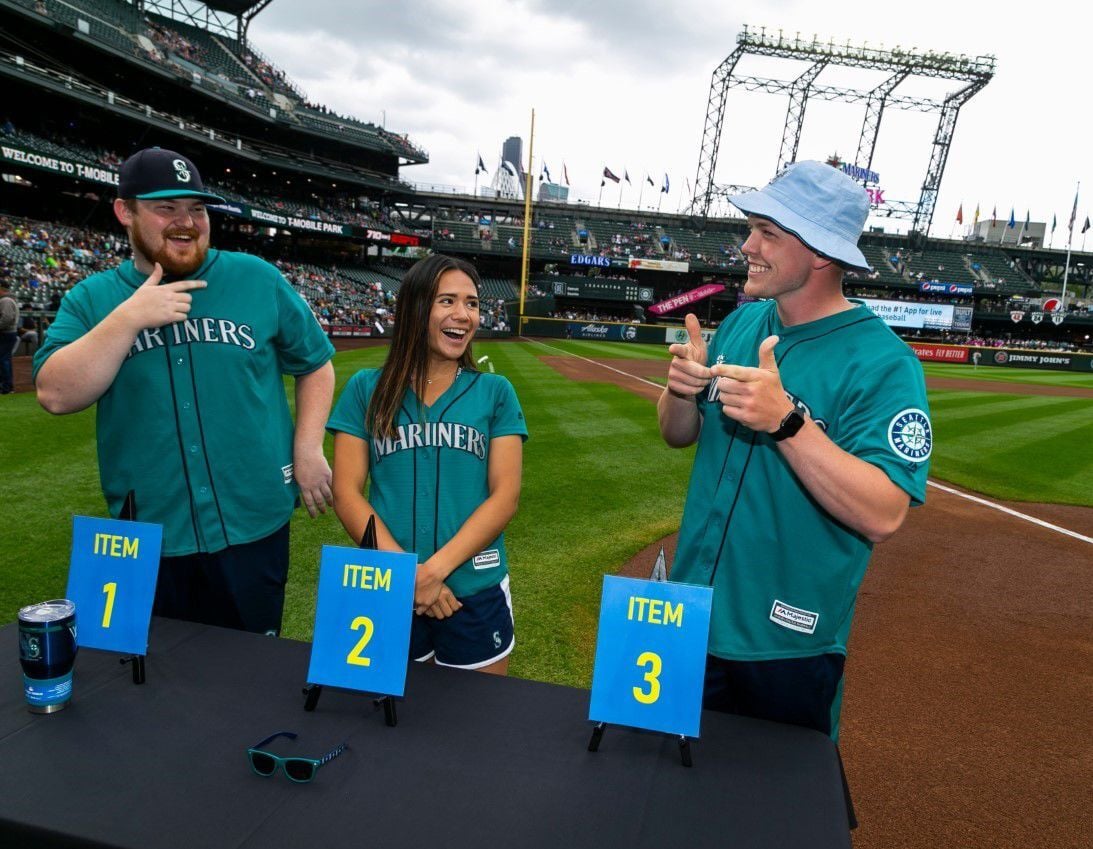 Mitchell Margaris (left) points to his fellow Navigators during a game of "Deal or No Deal" during a Mariners game at T-Mobile Park.

It’s not always, or even often, easy to be a fan of the Seattle Mariners major league baseball team. If the last 20 years of futility, and nearly 40 years of disappointment in all, hasn’t been enough to convince you of the curse of the trident, then perhaps a look at the M’s most recent box score will do the trick.

Despite all the blowout losses, and wasted talent, and even a few squandered shots at glory, there are some true to the blue Mariners fans who have never let their allegiance waiver.

Ever since he was a little tyke Mitchell Margaris has been one of those uniquely dedicated M’s fans. He’s got the memorabilia, he’s got the memories, and for the last few years he’s even had himself a gig at T-Mobile Park.

For Margaris, a 2013 graduate of Kelso High School, the goal has always been to stay in the game of baseball as long as possible. After heading to Grays Harbor College right out of high school he eventually set out for Waldorf University in Iowa for some more time on the diamond. But when a knee injury ended his playing career Margaris headed back to Aberdeen in order to finish up his degree.

Back at Grays Harbor the former Hilander buckled down and became one of the first Chokers to attain their entire Bachelor’s degree in education at the community college. He also wound up lending a hand in the athletics department, including an assistant position with the basketball team.

Incidentally, that detour to the hardwood wound up rerouting Margaris back to the biggest and brightest baseball diamond in all the land. At that time former Lewis County hooper Tristan Watson was playing basketball for the Chokers when Margaris mentioned offhand that he’d like to work for the Mariners someday. Watson noted that he had a job in the retail department for the M’s and offered to act as a reference to help his coach get a foot in the door.

As it turned out, that plan worked and the rest is history in the making. For the last three years Margaris has worked for the Mariners as a member of the Navigators, a game day group of friendly baseball-heads whose primary job is to keep fans engaged and laughing.

“I’m a huge fan of the Mariners. Always have been,” Margaris said. “We’re basically for gametime execution of competitions and different fan engagement activities.”

Those tasks include bringing fans down to the field during batting practice and keeping season ticket holders happy. He also gets to moonlight for big screen presentations of games like “Deal or No Deal” and he’s even had the opportunity to stand in for perhaps the most popular part of any Mariners game — the hydroplane races.

Typically those races are played out on the Mariners Vision big screen. However, during one game the power was out and the Navigators were forced to take up colored cardboard cutouts of the popular boats and run the race around the warning track themselves.

“When they mentioned that, I jumped!” Margaris said of the midgame emergency meeting that led to his short hydroplane “racing” career.

Holding true to the long standing hydroplane tradition Margaris made sure to take a tumble late in the race while another boat crashed into the wall. Racing as the yellow boat Margaris wound up in second place and tens of thousands of well-entertained fans came away as the winners.

“If you’re in first place in the final lap of that race there’s no way you’re winning,” Margaris noted with a laugh.

This year, though, COVID-19 has put both Margaris’ hydroplane racing and Navigators career on pause. Currently the Mariners are in the first leg of a long delayed regular season that’s being played under a set of uniquely altered circumstances. Perhaps the biggest change is that fans have not been allowed in any MLB stadiums this summer as teams attempt to complete a 60-game schedule. While Margaris is technically still employed by the Mariners he’s essentially been furloughed for the season since there are no season ticket holders or nosebleed seat kids to help have a good time.

Although the writing was on the wall way back in February, Margaris says he held out hope for a couple months before becoming resigned to the idea that he wouldn’t be sporting his teal Navigators jersey at work in 2020.

“The majority of the front offices in the league didn’t know what was going on either. When they would come back, or if they would even come back. When spring training got shut down that’s when we got the call,” Margaris said.

While he understands the safety measures that are in place that doesn’t mean that there wasn’t a fair amount of disappointment that came along with the decision to keep ballparks off limits to the public this summer.

“It was going to be cool to work up in seniority in the group. The longer you’ve been there the cooler, and more on the field fun stuff, you get to do,” Margaris explained. “Probably the biggest thing I miss is seeing the reactions from the fans when you pick them to come on the field for a competition, or after the Mariners have a huge inning and everyone is tuned in and has the same energy.”

His favorite on field games, in case you were wondering, are “Deal or No Deal” and “Plinko”. And while Margaris appreciates the effort and creativity behind the cardboard cutout “replacement” fans in the seats this season it’s clear that Margaris longs for the sights and sounds of a packed ballpark.

“The cutouts that they‘ve been putting in the stadium is awesome at least to see some faces in the seats. But the crowd reaction, the fan engagement, is kind of missing and it’s been really cool to be there firsthand,” Margaris said.

Cowlitz Black Bears pitching coach, Cam Margaris, also happens to be Mitchell’s brother. Cam, who has been on his own baseball odyssey since graduating from Kelso in 2010, readily admits that his younger brother is the more gregarious, and fanatic, of the two.

“Mitchell is absolutely the more outgoing one between the two of us, always the life of the party. He is like the super utility player of life. He has a wide variety of interests and talents and he is able to always accel in all of them,” Cam Margaris said of his brother. “Those skills combined with his passion of making people happy makes for a great fit for the role he is in with the Mariners. He is definitely the bigger Mariner fan, and not just of the big league club but the whole organization.”

Mitchell admits that he does still sometimes wind up feeling a little like a kid fantasy camp in the presence of superstar baseball players. He recalled becoming starstruck by Alex Rodriguez on one occasion and forcing himself to bite his tongue while he shared an elevator with Mariners general manager “Trader” Jerry Dipoto. On another occasion he admittedly became overjoyed when a famous member of the Mariners broadcast crew had finally remembered his name. Well, he was excited until a fellow Navigator noted that their names are on the back of their game day uniforms.

Even still, Margaris added that players like Kyle Seager, Dee Gordon, and Mitch Haniger are always gracious with their time for fans before the game. One time last season he wound up talking with Dylan Moore when the topic turned to former Hilander/Red Devil Derek Salberg, who had played with Moore at Central Florida University in the years after he notched “The Catch” at David Story Field.

Prior to his first on field assignment Margaris remembers one question he needed answered — “Can I talk to the players? Because I want every single one of their autographs,” Margaris said. “They told me I need to work on my poker face.”

For now Margaris is spending his free time working with the youth group at his church. He says he’s grateful to the Mariners for setting aside $2 million in funds intended to help hourly employees like himself get through the weirdest year in memory.

Looking forward, Margaris hopes to be back on the field with the M’s next spring so he can keep trying to work his way up in the organization. In fact, he’s trying to follow the blueprint of a friend who managed to parlay a job with the Navigators into a front office job.

“Being able to have a desk in that front office and being able to tell people that I work there would be a dream come true,” Margaris said.

Mitchell Margaris poses with friends on both sides of the force during Star Wars night at T-Mobile Park.

Mitchell Margaris (second from left) takes a tumble while manually running the hydroplane race at T-Mobile Park during a Mariners game.

Mitchell Margaris (far left, back row) poses for a photo with the Navigators prior to a Mariners game at T-Mobile Park.

Mitchell Margaris (left) points to his fellow Navigators during a game of "Deal or No Deal" during a Mariners game at T-Mobile Park.