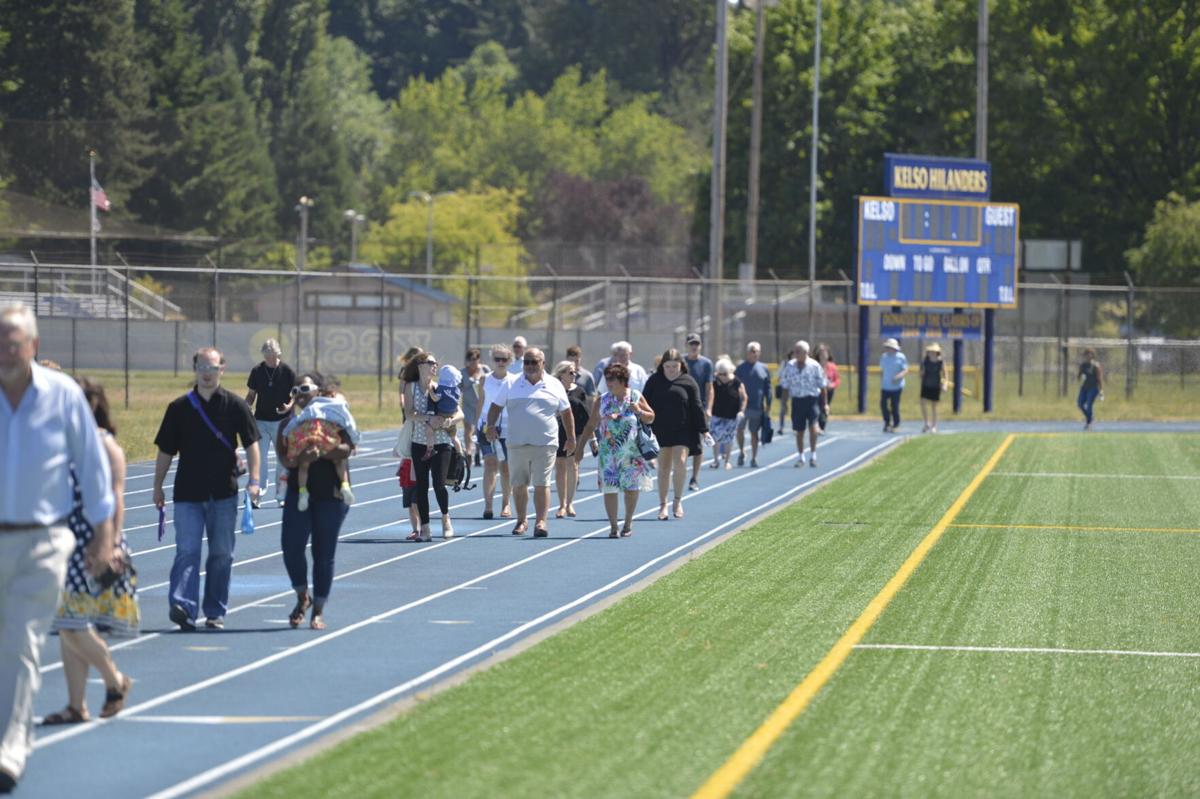 Attendees of late Kelso track coach Joe Stewart's Memorial finish the ceremony by taking a lap that bears the legendary coach's name on Tuesday, July 6, at Kelso High School. July 6 would have been Stewart's 67th birthday. 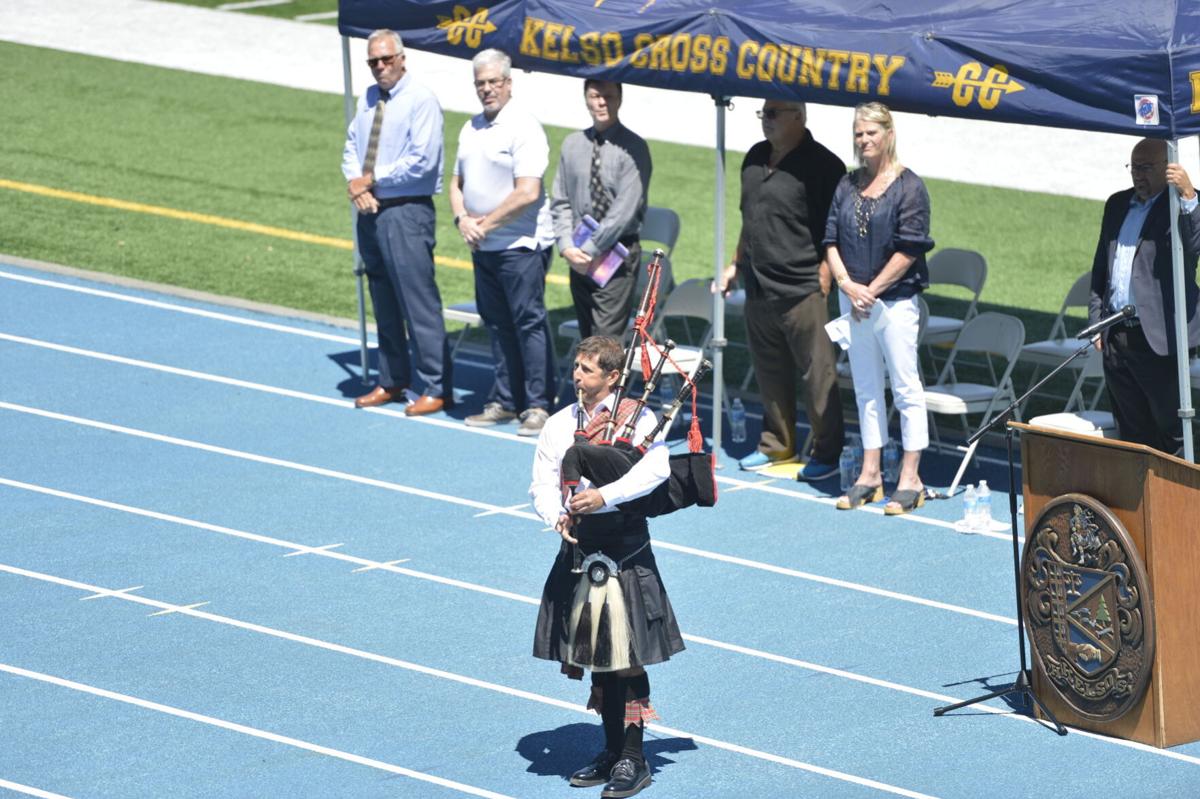 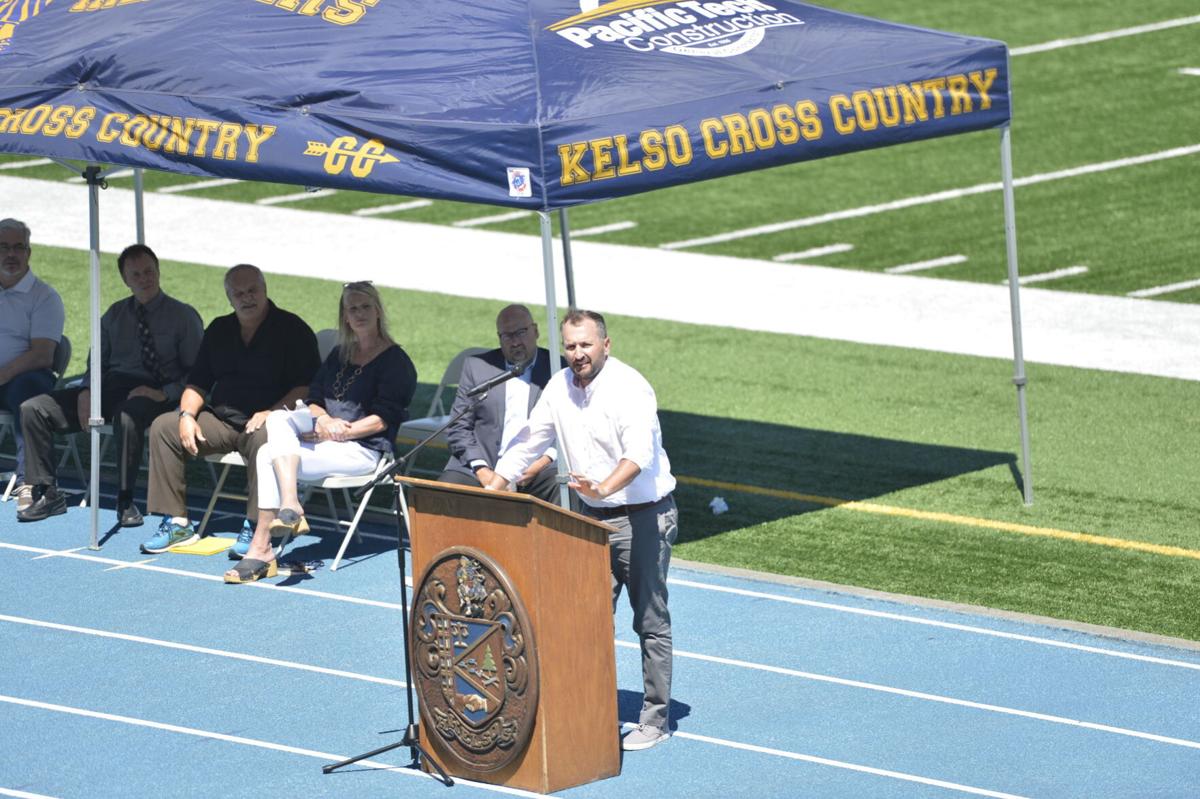 The legacy left by Kelso track and cross country legend Joe Stewart was tangible at Schroeder Field on Tuesday as hundreds of people who had been impacted by the longtime coach filled the grandstands for Stewart’s Memorial on what would have been his 67th birthday.

Attendees filed in to the sound of James Taylor, a personal favorite of Stewart, playing softly through the PA system. Twelve speakers lined the edge of the track that bears Stewart’s name to remember and recognize the impact that Stewart, who passed on May 7, had on themselves and Kelso as a whole. Each speaker had a specific aspect of Stewart’s life to recap in an effort to paint a full picture of the coach and counselor who touched the lives of so many.

John Paul, Stewart’s nephew, served as Master of Ceremonies and got the introduction for Stewart underway by telling a personal story about his uncle before deferring to Kelso Superintendent Mary Beth Tack.

Tack took a “by the numbers” approach to remembering Stewart’s accomplishments at Kelso. She rattled off a list of the important numbers in his life as a coach and as a family man and included the fact that Stewart is the only Kelso coach to be elected into the WIAA Hall of Fame in two sports — track and cross country. She also touched upon the 34 District championships he won as a coach of the men’s and women’s track programs from his time as coach from 1988 through 2003 and his impressive 339-15 win-loss record in dual meets during that period. She made sure to mention the lessons he imparted on Kelso athletes as he oversaw more than 70 of them when they continued their careers at the college level.

Stewart’s childhood friend Mike Navalinski followed Tack and described what it was like to grow up with the legendary coach before he had ever stepped foot on the track. Navalinski spoke of how a chance meeting on a trip to the Kelso Public Library turned into a friendly game of basketball that resulted in an instant friendship.

“We played for over an hour and then he joined me on the way to the library and, just like that, a lifelong friendship was born,” Navalinski remembered.

Navalinski detailed his time growing up with Stewart and was sure to mention his competitive nature as his anecdotes seemed to always revolve around some form of sport or competition.

After Navalinski, Jeff Shirey and Dan Hendrickson spoke about meeting Stewart for the first time in college and detailed his time at Southern Methodist University, where Stewart was captain of the track and cross country teams.

Shirey and Hendrickson both detailed their stories of Stewart, many of them revolving around Stewart’s old Volkswagen Beetle — a common topic for many speakers at the memorial.

Stewart’s longtime friend and assistant coach Rick Ames took the podium next. Ames described the middle school years when he first met Stewart and how he could see then the man that Stewart was destined to be. He shared stories of various middle school shenanigans and continued beyond that era to speak about some of the unique quirks Stewart had, like breaking out renditions of various songs while he ran.

“It sounds kind of crazy, but the guy would sing in the middle of a 15-mile run,” Ames said. But he always wanted to get done, I guess that’s why he ran so hard.”

After a brief intermission where Jason Sims played a rendition of Amazing Grace on the bagpipes, Tim Wines and Joe Krieder also spoke in remembrance of their former coach. Wines and Krieder were both runners that Stewart coached and helped compete at the college level. Stewart left a significant impression on both of them, and now they carry the torch as Wines coaches the cross country team while Krieder oversees the track and field program.

Wines went all the way back to the beginning and told of Stewart pulling him out of a test in order to try and convince him to compete in cross country.

“I could tell the day he pulled me out of my class to talk to me about cross, that he was different than most coaches,” Wines said. “I could tell that he actually cared about me. I recognized right away that he was one of the most loyal people I would ever meet.”

Krieder said filling the shoes of Stewart with the track program was not only difficult, but impossible.

“Let’s be clear, I did not replace him,” Krieder said. “Nobody can replace Coach Stewart. I just started coaching there after him.”

As Krieder entered the Kelso School District to teach — where he worked with Stewart when he returned to teach at Coweeman Middle School after spending years as a counselor at the high school — he clarified that he preferred to use the term “colleague” as opposed to “co-worker” to describe Stewart, because co-worker insinuated that they were equals.

“Although Coach taught us that we were all valuable and important, sports teams still award a most valuable player, and coach definitely earns that,” Krieder said. “So colleague suits me just fine.”

Both Wines and Krieder described the countless ways their programs take after Stewart’s teachings.

Bob Gustin, another on of Stewart’s colleagues, found his way to the microphone next to describe his time working with Stewart at Kelso High School. Gustin remembered Stewart’s dedication and commitment off of the track and how he truly cared about the students and faculty at the school and how he was constantly checking to make sure everyone was in a position to be successful.

“I think it’s safe to say that Joe had his finger on the pulse of Kelso High School more than most,” Gustin said.

Kelso basketball coach Joe Kinch, Stewart’s nephew, then shared his stories of his uncle growing up. Like many, he admired Stewart’s competitive nature and passion for Kelso High School and the city as a whole. He spoke of how Stewart would often call to get the breakdown of Kelso’s basketball games that he listened to on the radio.

Kinch also shared a story of how he finally got to compete against Stewart in their friendly basketball games when he was old enough, but was surprised when they played 2-on-2 but used the full court, giving an obvious advantage to the conditioned runner that Stewart was.

Kinch shared a story of a particularly long and strenuous run that Stewart led him on. After the run, Stewart gave a stern reminder that when visiting his house, it’s only appropriate to root for his beloved Oregon State Beavers.

After Kinch, Mike Sampson took over to describe the later years of Stewart’s life and the difficulties of his battle with Alzheimers near the end through the lens of a colleague and friend.

Stewart’s son, Jake, was the final speaker to reach the podium. Whereas most of the other speakers had written out their thoughts and stories, Jake spoke from the heart and spoke passionately about his father.

“There were very few things that he loved more than spending time with people that he really, genuinely cared about,” Jake said.

Stewart finished with a “Go Kelso!” to wrap up his speech before everyone in attendance was invited down to Stewart’s track to walk a lap and remember the late coach and what he stood for.

After the lap, a group dressed properly in running attire, made their way through the cross country course that Stewart designed as a last tribute to a man that had an undeniable impact on Kelso High School and forever shaped the running programs at the school.

It was one last lap and one more chance for everyone to remember Joe Stewart, together.

What was the craziest story in sports yesterday?

Will we see Max Scherzer traded?

Will we see Max Scherzer traded?

How may players on the Cubs will be traded before the deadline?

How may players on the Cubs will be traded before the deadline?

Attendees of late Kelso track coach Joe Stewart's Memorial finish the ceremony by taking a lap that bears the legendary coach's name on Tuesday, July 6, at Kelso High School. July 6 would have been Stewart's 67th birthday.