Become a Member
Read Today's E-edition
Share This
Time to make a State-ment: Previewing a full weekend of playoff action
0 comments
Share this
1 of 2 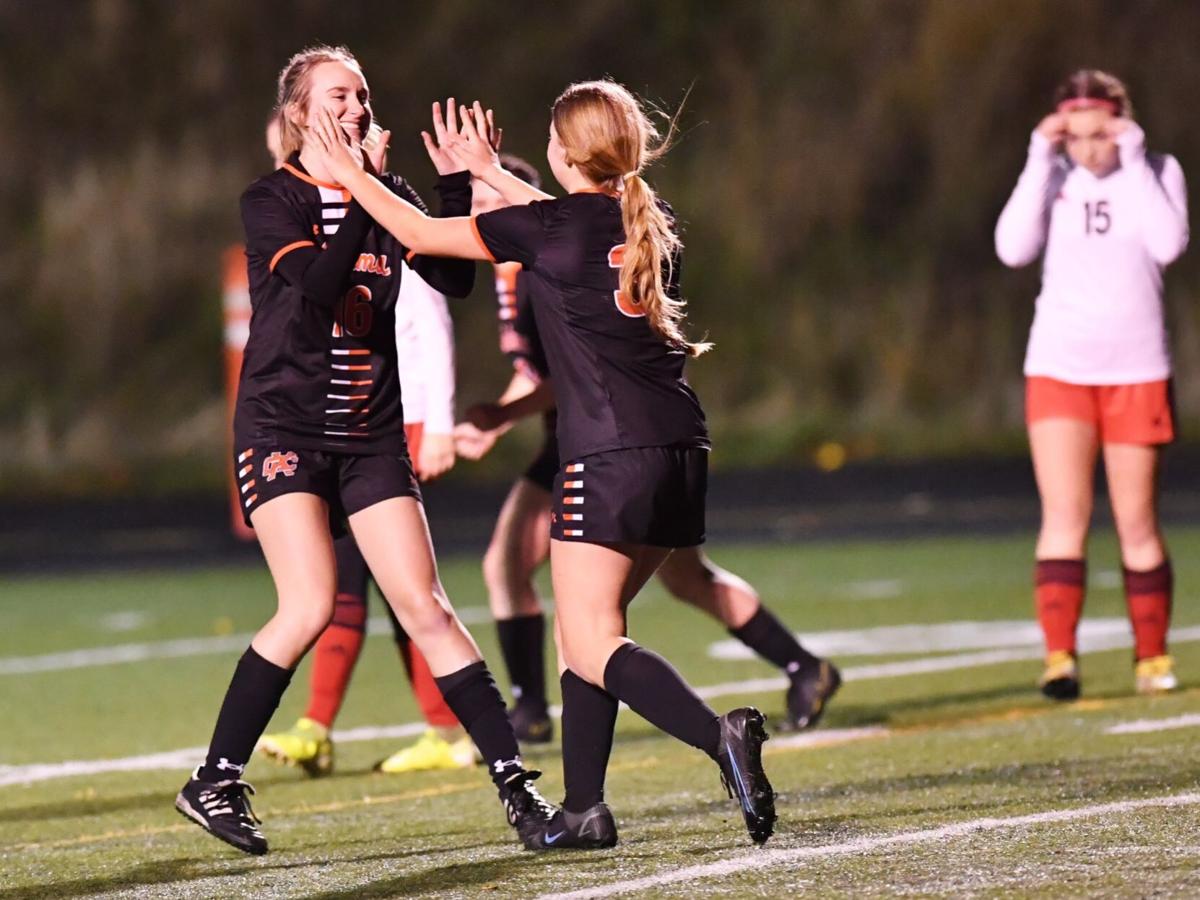 Kailey Shipley (16) celebrates with Josie Brandenburg (3) after Brandenburg's goal on a penalty kick put Kalama up 2-0 in the 37th minute of the Chinooks' Nov. 4 2B District IV semifinal on Nov. 4. Kalama won 3-0. 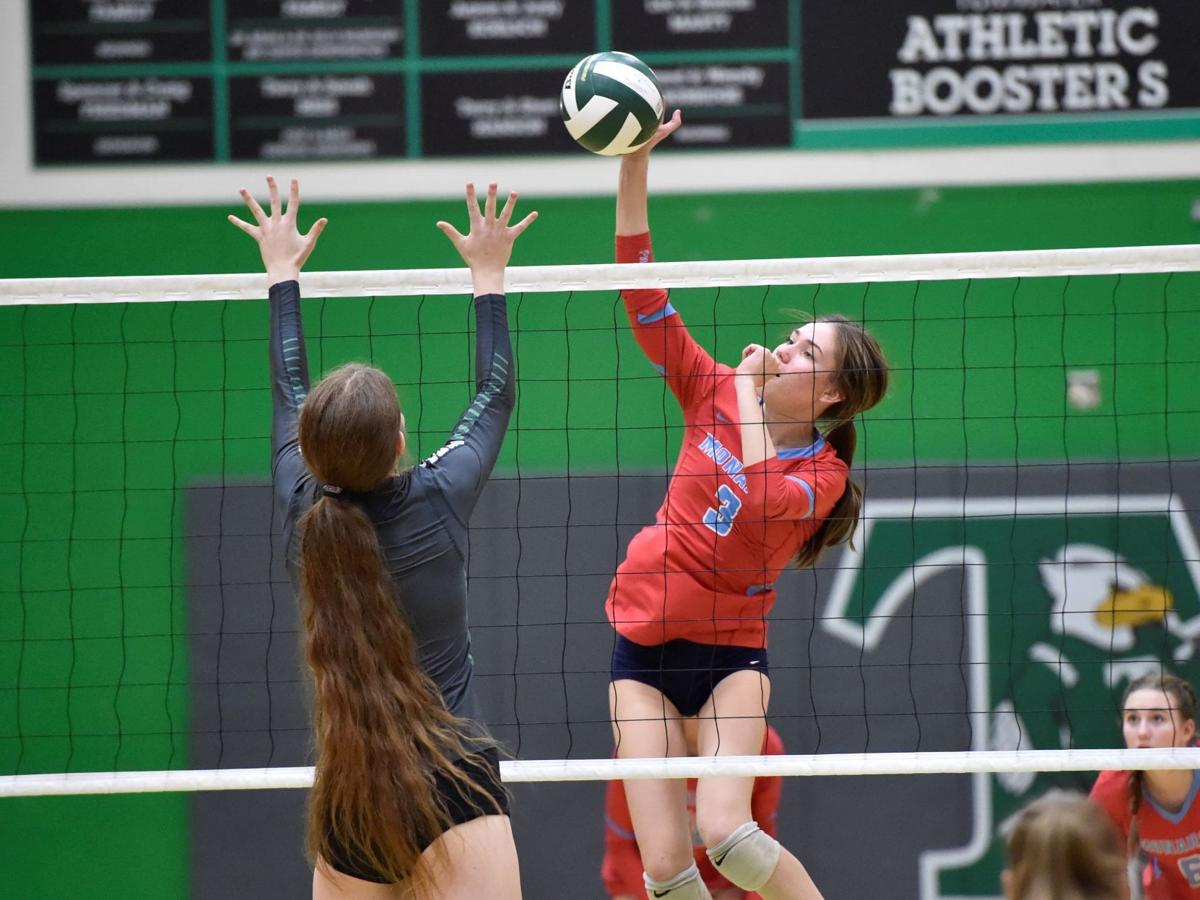 Mark Morris' Ali Millspaugh spikes the ball over the net against Tumwater during the opening round of the 2A District IV Tournament on Thursday, Nov. 11, at Tumwater High School.

Not that anyone especially dislikes winter sports here, but we’ve hit the portion of the season where athletes are doing anything and everything they can to push back the time they’ll have to trade in their shoulder pads and shin guards for basketball shoes and wrestling singlets another day. It’s winning time, and here’s how a decisive and dramatic weekend is set to shape up.

(Editor’s Note: This is only a preview for the matches that are certain to happen as of press deadline, so it does not include the Kelso or Mark Morris volleyball teams’ second- and third-round matchups, or the 2B soccer finals and third-place game on Saturday.)

The Central 2B League has had a foothold in the State semifinals for over a decade, with at least one representative in the final four every season since 2008. For all that success, though, the league has never won a state title at the 2B level. This year, the foothold turned into a stranglehold, with Adna, Kalama, and Toledo forming 75% of the semifinals, all gunning for their first trophies.

Kalama vs. Highland (2 p.m. at Sunset Chevy Stadium in Sumner)

The lone team from across the mountains remaining gets to come over and face a Kalama side that’s rolled nearly this entire season. Highland controlled play for most of its 2-1 win in the quarterfinals over Reardon, going ahead by two goals before conceding in the final few minutes. Kalama score in the first minute and then poured in three more goals in its quarterfinal, beating Tonasket 4-0.

The X-factor: Kalama’s defense has allowed two goals in the past month. One came on a turnover at the back against Adna in the district final, the other one came late in a blowout of Toutle Lake. The Chinooks have largely suffocated opponents with possession, and the defense has been nearly perfect at snuffing out any semblance of chances. If Highland can put consistent possession and pressure together, how will the Chinook back line respond?

Toledo vs. Adna (4 p.m. at Sunset Chevy Stadium in Sumner)

Due to the alignment of divisions this year, this will actually be the first time this season the Riverhawks play the Pirates. Toledo’s won its playoff games by the slimmest of margins — a 1-0 win in the first round and a double-overtime victory in the second — while Adna shocked Eastern Washington with a 3-1 upset of No. 1 Okanogan.

The X-factor: When Kalama beat Adna in the district championship, the Pirates had a nightmare defending corner kicks and crosses. Between Marina Smith and Vanessa Rodriguez, the Riverhawks may have the best aerial attackers in the area, and Rose Dillon can swing in corners with the best of them.

This writer has already made his feelings known about this matchup, so we won’t belittle the point. The Monarchs get the chance to shock the world against top-ranked Columbia River, which has won 14 matches in a row and hasn’t dropped a set to anyone not named Ridgefield yet this season.

The X-factor: True to their mascot, the Rapids run a quick-tempo offense, with some of the best weapons in the state at the pins. If the Monarchs want to even think about the upset, they’re going to need their front row players to have the match of their lives getting hands up on the outside to at least take the sting out of CR’s spikes.

The stakes: The winner stays in the hunt for the state title, while the loser is sent to the eighth-place bracket. Both teams play again at 4:15, the loser in a loser-out match.

Despite being slotted at No. 4, Pomeroy has been by far the most dominant team in eight-man football. The Pirates have yet to be held under 50 points, have eclipsed 80 twice, and their smallest margin of victory was a 32-point win over DeSales, who took a No. 6 ranking into the state playoffs. Naselle’s coming in on a hot streak of its own, with six straight wins by over 35 points.

The X-factor: Pomeroy’s only allowed double-digit points three times all season. Naselle’s key to stopping the Pirates’ offense might be just to keep the ball and keep up with them on the scoreboard. The Comets have already won one back-and-forth shootout over a playoff team, now they’ll see if they can do it again.

The Stakes: Winner moves on to the semifinals, loser hangs the helmets up.

The pundits are expecting this one to be a lot closer than most No. 14 vs. No. 3 matchups would be. Winlock’s coming off a 64-60 thriller of a win over DeSales — its first playoff win since 1999 — while Quilcene has had a week to rest up.

The X-factor: All of a sudden, Winlock has a passing game. After racking up just 15 completions and being more a threat on the ground in the regular season, Neal Patching went 17-for-21 for 380 passing yards and five touchdowns in the Cardinals’ win over DeSales. That adds another dimension to a potent Winlock offense, and if there’s a knock on Quilcene, it’s that the Rangers have allowed over 30 points in each of their past two games.

The Stakes: Winner moves on to the semifinals, loser unearths the basketball shoes.

Two teams from the TDN coverage area are left in the 2B playoffs, and one will be going home after a dose of late-night action. Kalama’s been chomping at the bit after a bye week, while Toledo came back to upset Davenport on the other side of the mountains in the first round.

The X-factor: When the two sides met in league play, the Chinooks jumped out to a 36-7 lead at the half, but the Riverhawks kept the second half scoreless. Whether or not Toledo found the key to stopping the Kalama offense — and if they did, whether the Riverhawks can replicate it for four quarters — remains to be seen.

The Stakes: Winner moves on, loser moves out.

The operating word as the Kalama football team broke its Tuesday practice, with just three days remaining before its 2B State title matchup ag…

2A Boys Basketball: Lumberjacks light a fire in Lumberdome

NASELLE — Emerald Niemela helped a new-look Wahkiakum team pick up a 57-34 win over Naselle to open the season on Tuesday night. Niemela finis…

ABERDEEN — There would be no lull to open the winter season for Kelso, which blew past Aberdeen from the opening tip and only grew its lead mu…

2A Girls Basketball: Effort gets R.A. Long past Heritage as Randall picks up first career win

VANCOUVER — R.A. Long played with high intensity as they took down 3A Heritage 56-42 in new coach Kyle Randall’s first win in charge of the Lu…

With basketball season ready to begin, a few local teams got a chance to go up against squads wearing different colors for the first time this…

Kailey Shipley (16) celebrates with Josie Brandenburg (3) after Brandenburg's goal on a penalty kick put Kalama up 2-0 in the 37th minute of the Chinooks' Nov. 4 2B District IV semifinal on Nov. 4. Kalama won 3-0.

Mark Morris' Ali Millspaugh spikes the ball over the net against Tumwater during the opening round of the 2A District IV Tournament on Thursday, Nov. 11, at Tumwater High School.