HOCKINSON — R.A. Long trailed for a moment on Monday, but the Lumberjills didn’t let that last for long as they got hot at the plate and stayed cool in the field to the tune of a 9-2 win in the 2A Greater St. Helens League softball tournament.

Miranda Bergquist kept the Jills in the driver’s seat from her spot in the pitcher’s circle. After surrendering one run in the bottom of the first inning she settled down and put goose eggs up on the scoreboard until the Hawks were able to steal one more run in the seventh frame. By that time, though, that pittance of production from the home team was too little too late.

“Miranda Bergquist threw a sensational game in the wet with 6 Ks (and) five hits,” R.A. Long coach Dave McDaniel said. “(She) did a great job picking the hitters apart.”

Behind Bergquist on the diamond the Lumberjills played flawless defense that helped to snuff out any Hockinson hopes before they could begin to metastasize into anything harmful. Put on the spot to pick the lynchpin of that defensive unit, McDaniel pointed to shortstop Hope Childers.

“She is the leader out there,” McDaniel said. “She has great games (and) the rest of the team follows suit.”

Of course, the Lumberjills’ skipper couldn’t hand out kudos to the gloved gang without a tip of his cap to the team’s cinder block strong backstop, along with a couple of corner defenders who’ve helped to hold opposing offenses at bay.

“Gracie Byrnes as the catcher is always talking and directing as a good catcher should,” McDaniel said. “Surprise athletes on defense are Kennedy Keith in right field and Jadyn Terry at third base. They have stepped into those roles and have impressed me.

After falling behind by a run in the first frame the R.A. Long bats began to come to life. In the second inning to knot the game up at 1-1. In the second inning they hung their first crooked number to take a two run lead and from there the Jills just kept adding on. That offensive attack led to another run in the fourth inning, two in the fifth, and three more for good measure in the sixth frame.

Like a hurricane, Byrnes was a force strong enough to drop the Hawks all by herself with two hits on the day that included a double and home run to go with five RBIs. Not to be left out of the fun, Childers went 3-for-3 at the plate, scoring three runs and driving in a run along the way.

As the Lumberjills prepare for their next test in the 2A GSHL softball tournament (see: Ridgefield Spudders, league champs), McDaniel and company are feeling good about the multiple options they have coming out of the bullpen.

“Miranda came into this year as being a 1-2 punch with Myah Bodily. We feel like we really don’t have a number one but a great combination,” McDaniel said. “ Miranda is more power and Myah is the keep-you-off balance and hit-your-spots type of pitcher. They have both had their games showing excellent stuff.

“We really do look at match ups before each game to see what the best situation is before we choose our pitcher these last few games. Jaydn Terry is a great complement to both. She has great stuff, with speed and hits her spots.”

Still, the Jills know they’re going to have to rattle the bats if they want to pummel the Spudders and keep on advancing through the top of the bracket. To that end, McDaniel has a plan of attack of sorts.

“They are the only team to quiet our bats, so I’m saying we need to finally erupt on them with the bats like we are capable of,” McDaniel said. “Ridgefield’s pitcher seems to have some sort of answer to us that we gotta overcome. Hits hits hits... Put the ball in play and make them handle it.”

Clatskanie — The top-ranked Tigers snuck past No. 2 Rainier (10-1) on Tuesday, winning a contest that matched the rivalry’s moniker, 6-5. With…

RIDGEFIELD — After losing to Ridgefield twice in the regular season, the R.A. Long softball team’s focus for their 2A GSHL tournament matchup …

KELSO — The Kelso softball team only managed one crooked number all game, but consistently put up runs nonetheless, scoring in five of its six…

2A Softball: Beavers pull away late to top Monarchs

2A Softball: Monarchs pile on hits, pull away from Bay; Rapids walk-off Jills

VANCOUVER — It turned out that the two runs scored in the top of the first inning would be all the Mark Morris softball team would need, but t…

WOODLAND — The weekend was a perfect time for a warm up between 2A Greater St. Helens League softball rivals as Mark Morris hit their way to a…

WILLAMINA, Ore. — The Columbians had nearly free run to do as they pleased, Friday, as they dropped Willamina 15-1 in Oregon 3A softball action.

Clatskanie — The Tigers snuck past #10 ranked Yamhill-Carlton (6-3) on Tuesday, winning a close affair, 3-2. With the win, Clatskanie extended…

WINLOCK — The spoils were split Saturday in Egg Town in a doubleheader between Winlock and Ilwaco that featured a pair of run-shortened games,… 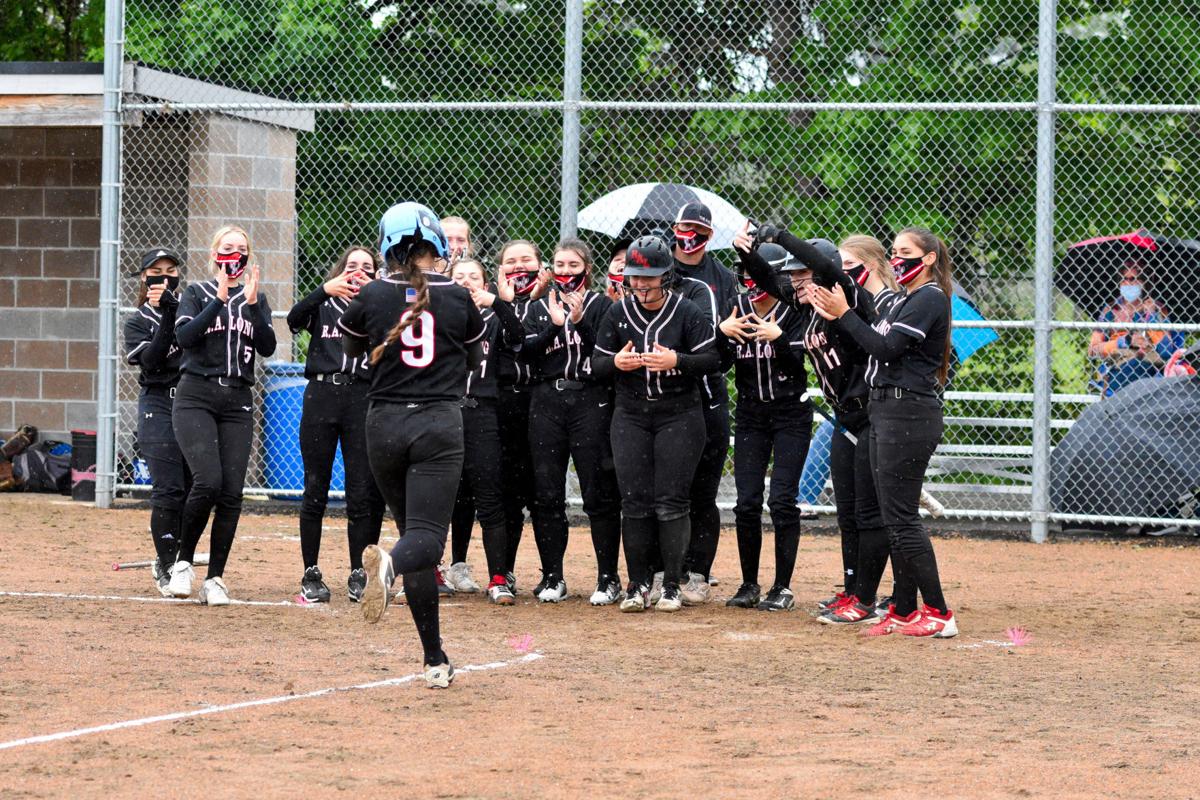 R.A. Long's Gracie Byrnes is greeted at home plate by the rest of the Lumberjills softball team after belting a home run against Hockinson in the 2A GSHL tournament on Monday in Hockinson. Byrnes finished with five RBIs in a 9-2 win for R.A. Long. 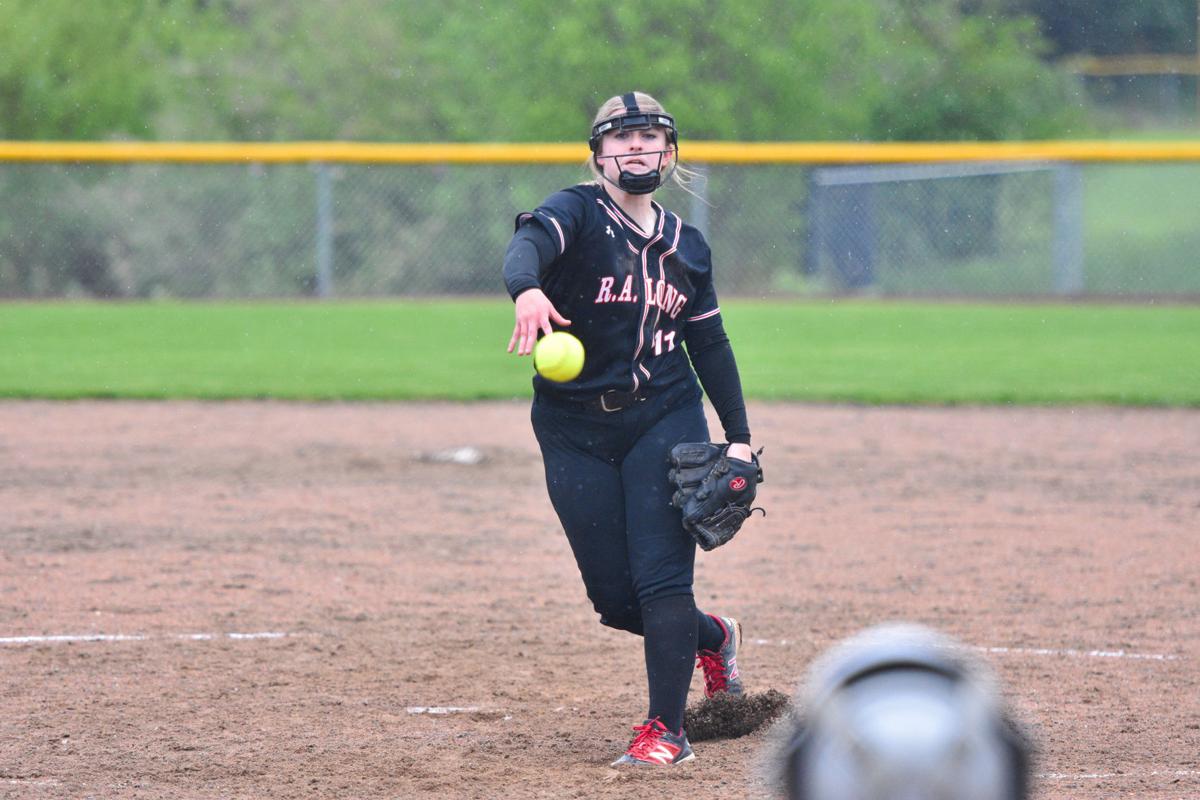 R.A. Long's Miranda Bergquist throws a pitch to a Hockinson batter on Monday during the first round of the 2A GSHL softball playoffs. Bergquist struck out six batters over seven innings for the Lumberjills in a 9-2 win. 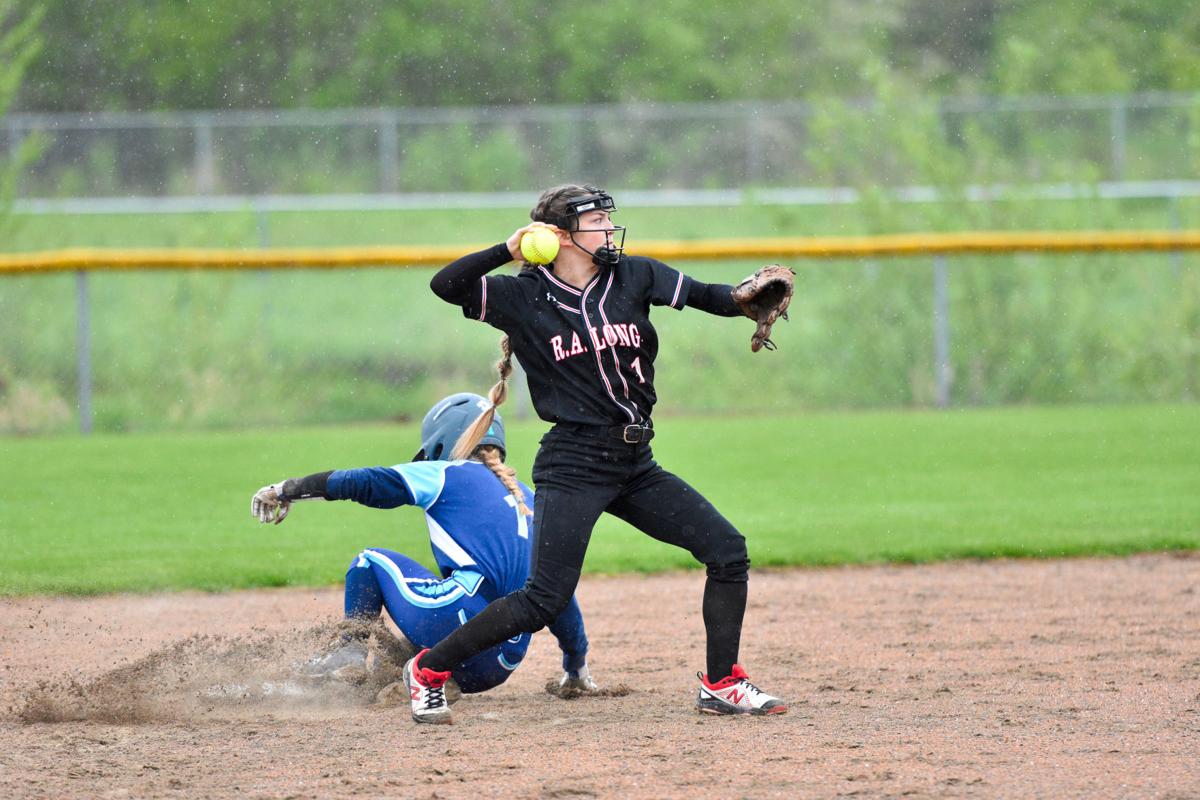 R.A. Long's Kenna Kolba looks to turn two after securing a force out at second base during a 9-2 win over Hockinson in the 2A GSHL softball playoffs on Monday in Hockinson. 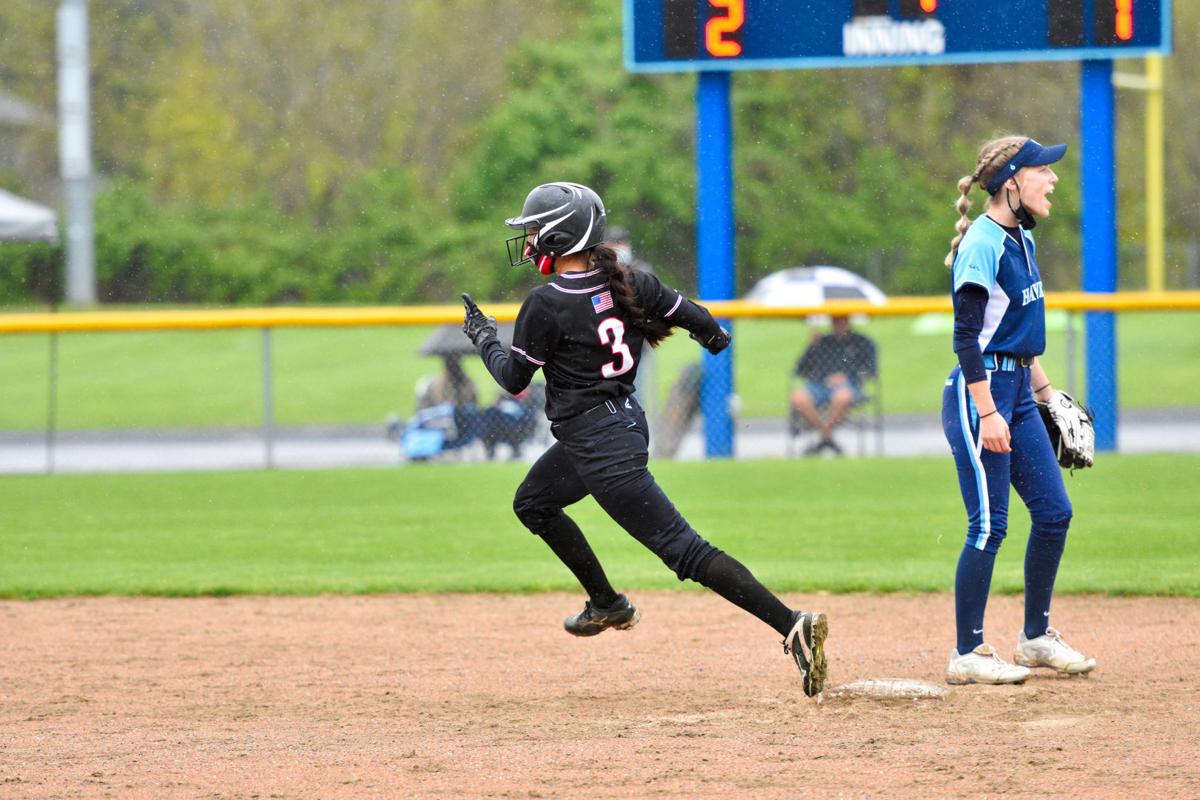 R.A. Long's Myah Bodily rounds second base in the third inning against Hockinson on Monday in the 2A GSHL softball playoffs. The Lumberjills went on to win 9-2. 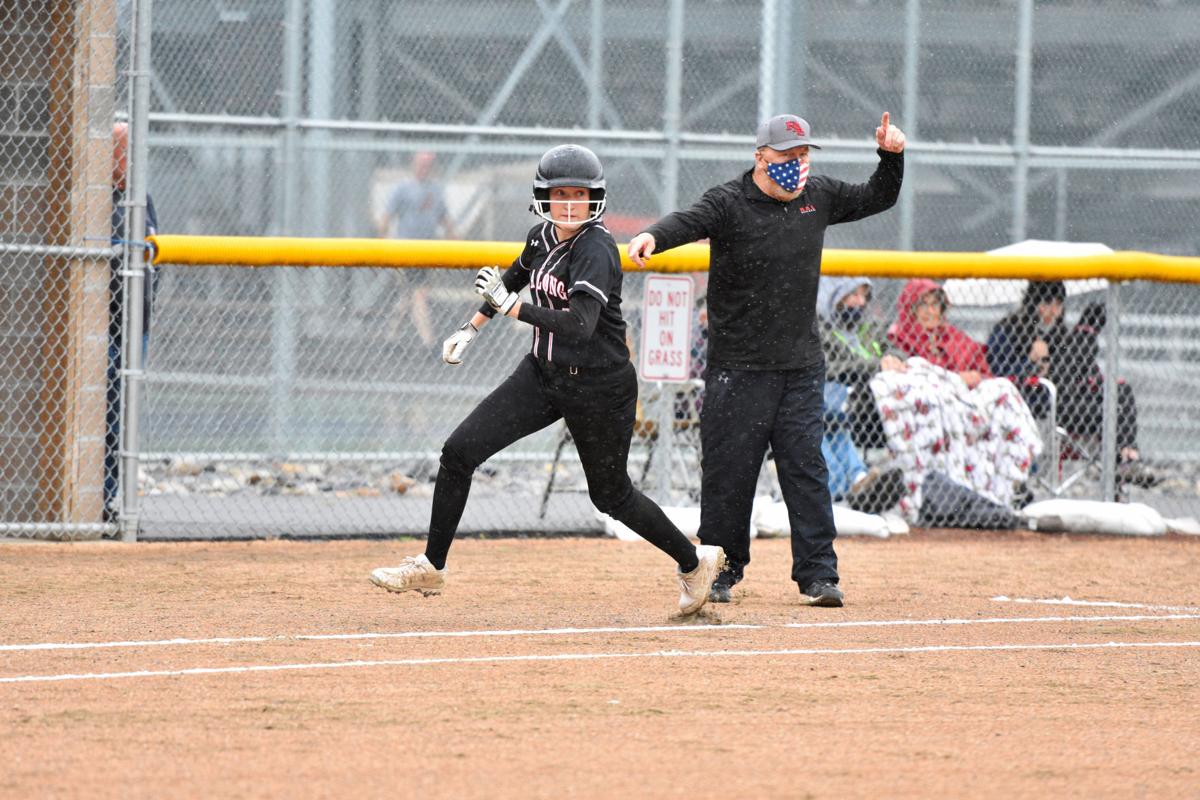 R.A. Long's Jaydn Terry heads for home as third base coach Jim van Fleet waves her in to score against Hockinson on Monday in the 2A GSHL softball playoffs. The Lumberjills won 9-2 and advanced to play top-seeded Ridgefield.