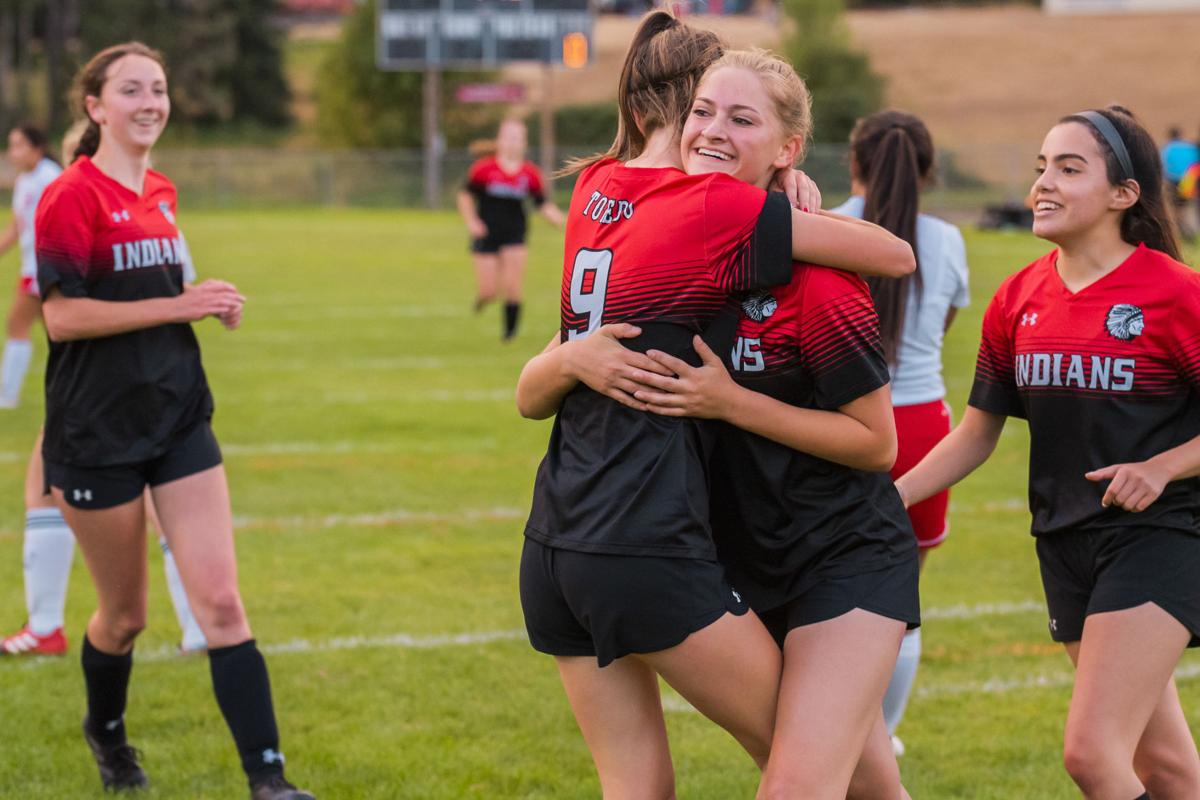 Toledo’s Vanesa Rodriguz (12) smiles and hugs Marina Smith (9) after a goal Tuesday during a game against Hoquiam. 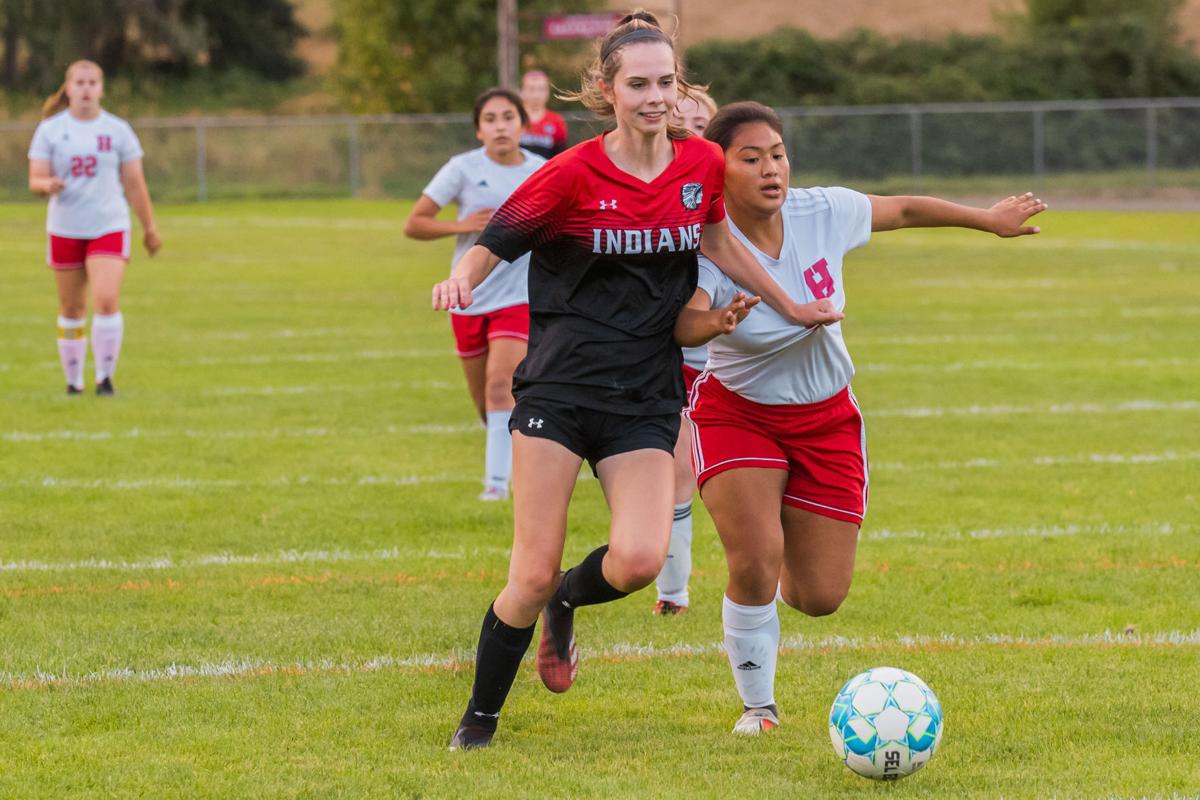 Toledo’s Marina Smith (9) fights for possession before taking the ball down to score Tuesday during a game against Hoquiam. 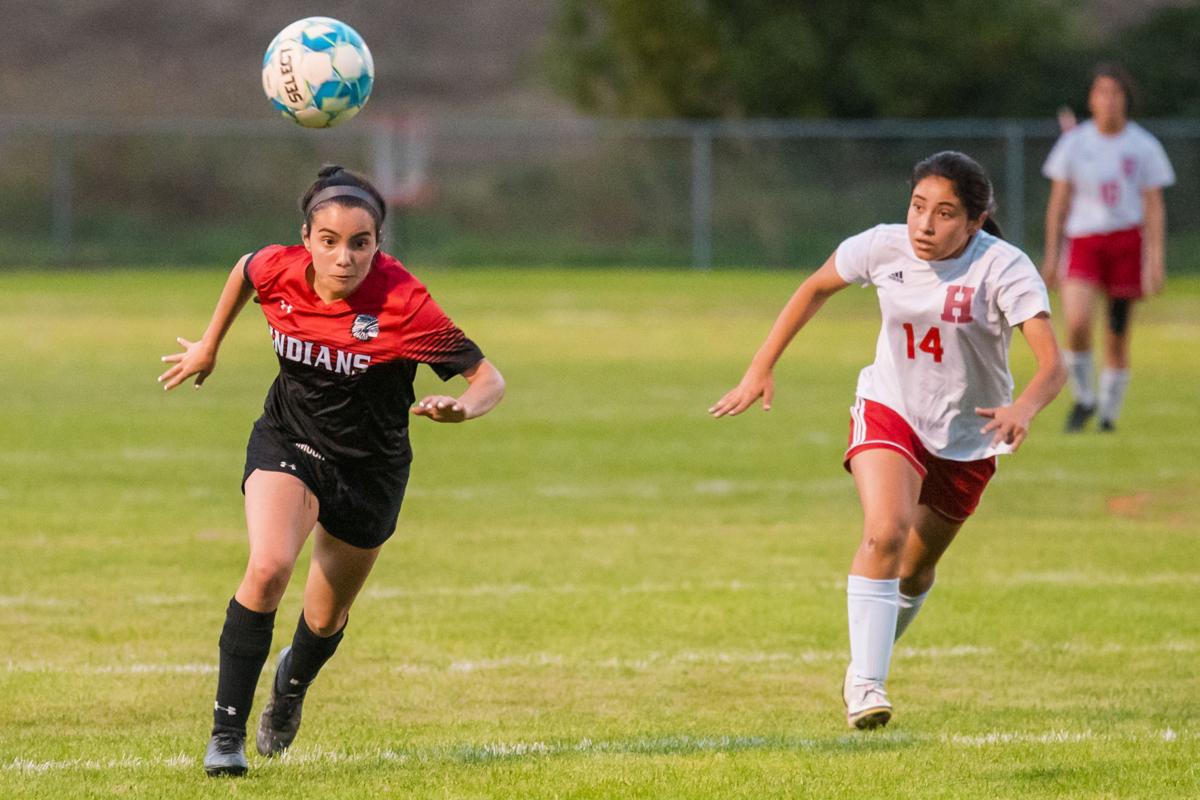 Toledo’s Jazzy Zarate (2) races towards the ball Tuesday during a game against Hoquiam.

“When you’re playing that 1A school that’s making five subs at a time and we’re able to go out there and do stuff, it tells you a little about our determination,” Toledo coach Noel Vazquez said.

Vazquez and his team have known that that determination would be needed for a few months now. When the winter season ended and Toledo graduated five seniors with fewer underclassmen coming up the pipeline, the Riverhawks realized they’d be playing with a skeleton crew this fall. Toss in a couple of players waylaid on their path to build up the necessary amount of practices, and Toledo found itself with just 11 to open its season.

The first part of good news is that since Toledo saw the bind coming, the team had time to prepare, particularly for the challenge of having all 11 players in shape to play two full halves if need be.

The second batch of positives came from the fact that the 11 Vazquez put on the field Tuesday had about as much experience returning as possible for a side that lost so much. The Riverhawks’ lineup had seven seniors — though one of them is in her first season on the soccer team. Meanwhile the two juniors on the field — winger Paige Hill and keeper Daphnie Bybee — both played as eighth graders, meaning Eight of Vazquez’s 11 already have three seasons’ worth of experience under their belts.

Because of that, the scoresheet at the end of the Riverhawks’ fall debut looked a heck of a lot like one from the winter season — namely, with Marina Smith and Rose Dillon’s names speckled all over it.

The two started together in the midfield, behind Vanessa Rodriguez and Jazzy Zarate. In the seventh minute, Smith got the scoring started, taking a feed from Rodriguez and doing the rest to put her team ahead.

“Vanessa is a second-team all-league outside back, and today she got to start on the front as a forward with Jazzy,” Vazquez said. “She’s a big target that gets a lot of attention and opens things up for other players like Marina. She gave her that assist, and Marina was able to penetrate down the middle and put it in the corner of the goal to get us started.”

From there, it was entirely Smith and Dillon on offense. Smith set up Dillon five minutes after the opener to double the lead early, and Toledo went into halftime up 2-0.

Twenty-five minutes into the second half, Dillon returned the favor, assisting Smith’s second goal to make it 3-0, and just two minutes after that, it was Smith’s turn to set up Dillon one more time, leaving both sides of Toledo’s Terrible Twosome with a brace.

“They both bring their own set of skills,” Vazquez said. “They each are two different players, but when they play together, it just creates a big, chaotic problem for the opponent’s midfield or defense.”

Those last two goals gave Toledo’s lineup a bit of extra breathing room, as even after all of their preseason conditioning, the Riverhawks were running ragged by the end.

“The last 15 minutes, we were almost crawling,” Vazquez said. “But we were able to score another goal when we were struggling. That’s just the determination that these girls have this year.”

While the seniors up front were scoring, it came down to Bybee and the Toledo back line to keep the shutout intact.

In the middle of it all was Greenlee Clark, who kept everything steady while working with Hill — occupying the defensive midfield spot — to help get Hope Gould and Heather Fenison up to speed in their first-ever varsity games at the respective outside back positions.

“I think the biggest thing is that Greenlee Clark is a very underrated center back,” Vazquez said. “She’s very strong. This is only her second season, but she’s gone against some of the toughest players in the league… She does the job that needs to be done and she’s clutch when she needs to be clutch.”

Bybee finished with five saves to seal the shutout.

Toledo (1-0) will have to go with 11 players again when it makes the drive to the coast to face Ilwaco on Wednesday. If all goes to plan, they’ll get Maritza Salmeron — the lone sophomore on the roster — back for Friday’s home match against King’s Way Christian to give them the luxury of a substitute.

SEATTLE — This time last week, with a road matchup in Oregon next on Kelso’s schedule, Steve Amrine certainly didn’t expect to be leading his …

2B Football: Riverhawks run past Mules

Toledo held Wahkiakum to just three points in the final three quarters in a dominant win in 2B play.

The week is coming to a close, and at its end stands another week of high school football in Southwest Washington. Here’s how our so-called ex…

1A Football: Rusty Rockets can’t keep up with Montesano

Castle Rock — After a last-minute cancellation gave Castle Rock an unexpected bye week last Friday, they faced the tall task of taking on No. …

3A Football: Kelso keeps rolling in win over Prairie

Kelso dominated in every area of the game in a 33-8 win over Prairie on Friday.

KELSO — Coming off back-to-back losses, Kelso volleyball coach Michelle Mury knew it was time to make some changes as they came back home to p…

VANCOUVER — So far this season, the R.A. Long soccer team has allowed just one goal during play. The goal came during their opening game, and …

Toledo’s Vanesa Rodriguz (12) smiles and hugs Marina Smith (9) after a goal Tuesday during a game against Hoquiam.

Toledo’s Marina Smith (9) fights for possession before taking the ball down to score Tuesday during a game against Hoquiam.

Toledo’s Jazzy Zarate (2) races towards the ball Tuesday during a game against Hoquiam.