Become a Member
Read Today's E-edition
Share This
Ryan Peerboom: What No. 22 stood for
0 comments
Share this 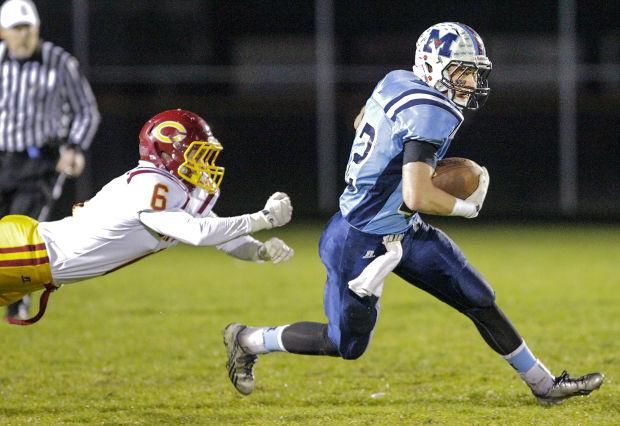 FILE--Capital's Gavin Armitage can't quite make the reach to slow down the Monarch's Keigan Baker in a 2013 game. 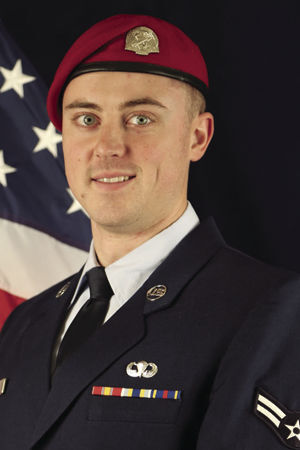 Typically, number retirements are joyous celebrations in honor of a remarkable individual’s athletic accomplishments. When Mark Morris retires Keigan Baker’s No. 22 tonight, there will likely be a more somber tone. But that doesn’t mean it shouldn’t be a celebration of Baker and what he stood for as a player and as a person, because he was exactly that — a remarkable individual.

I didn’t know Baker personally, but I did know him as a competitor, lining up across from him throughout our years of playing against one another.

In fact, the first time I had ever heard of Baker was during middle school tournament basketball. He was unstoppable. He was single-handedly destroying teams left and right for the Landsharks, a team comprised of future MM players (once referred to as the Mini Monarchs). I played for the Junior Jacks, and we had to find a way to try and contain him, so we learned a completely new defense — the box-and-one — just to try and slow him down.

For those that aren’t familiar, the box-and-one is typically reserved for a player that’s so good it takes a team effort just to hope to contain them. It threw them off in the first half, but after some halftime adjustments Baker took control of the game and found a way to beat us.

Soon, the competition would turn to a bigger stage on Friday nights. Whenever I scoped out the Monarch defense and saw Baker at linebacker, the thing that always stuck with me was his stoic demeanor on the field. I could never get a read on him, he was calm, cool and collected in the face of pressure.

This culminated in an epic Civil War showdown our senior year with the 2A GSHL crown on the line. Baker scored the go-ahead touchdown with just over two minutes left, taking chunk after chunk out of our defense until finding the zone. We made it all the way to the 8-yard line on the ensuing drive, but Baker jumped a pass heading for the back of the end zone and plucked it out of the air to seal the game and league title for the Monarchs.

I never saw him.

That play used to weigh on me, but it doesn’t anymore. Now I can respect exactly what that play meant for Baker, for Mark Morris and for his teammates. And realize that those moments do mean something, because they shouldn’t be taken for granted.

But as I said, I couldn’t get a read on him from the opposing sideline beyond a respect for the type of competitor he was. So I had to reach out to some of his former teammates in order to get the bigger picture and fully understand what Baker was like as a teammate.

Sam Harris, a First-Team All-State defensive lineman on that 2013 MM team, played with Baker since those middle school days. “Dedication” was the term that kept popping up throughout the conversation.

“Probably the hardest worker,” Harris said. “The most dedicated person to sports that I played with in high school and middle school.”

Harris noticed first-hand that same calm presence that I saw as an opponent.

“Super level-headed,” he said. “He never got angry, but when he did, he didn’t show it, he just showed it on the field.”

Harris’ relationship extends back with Baker as he reminisced on nerf gun fights in Baker’s basement, or air-soft wars in his backyard.

Ryan Littlefield was also another teammate of Baker’s on the football field as well as the basketball court.

“He’s one of the best friends I’ll ever have in this lifetime,” Littlefield said.

Littlefield, a three-sport standout at Mark Morris that now helms the R.A. Long baseball program, first got to know Baker when he was a freshman special teams player on the MM football team. Littlefield was a year older, but quickly took a liking to Baker.

“He was someone who throughout high school and even after high school…he was a super easy person for everybody to root for,” he said.

Baker was also the type to spread his knowledge to other teammates without being overly critical.

“He was never bagging on other teammates, always wanted to help anybody else that needed it,” Harris said.

Baker’s hard work wasn’t relegated to the field as he excelled in the classroom to the point where others took notice.

“School to him, was just as important as sports were…he was a really good student,” Harris said.

Baker’s studies eventually led him to an ROTC program at Eastern Washington, developing further into a hopeful career in the Air Force. The desire to serve wasn’t a surprise to Littlefield, who said he remembers Baker’s desire to be a Navy Seal from when he first met him.

In spite of his successes, the work ethic never relented and Baker stayed committed as ever, but did so in the right way.

“I don’t think the dude took it easy on anything he did in his entire life,” Littlefield said. “Just ultra-determined, but not in like an arrogant, jumping up and down, ‘look at me’ type of way. It was a super quiet, humble, but confident presence that’s really easy to get behind.”

Littlefield summed up what advice he thought Baker would give the current Monarchs — “Die living.”

Those words are more poignant now, but Littlefield says it’s something that always defined Baker.

“That’s kind of a mantra and a motto that he lived by throughout high school and into college and into the military,” Littlefield said.

When the current Monarch players see the number 22 retired on Friday night, they should see more than a number. They should see an exemplary athlete. One that reached rare peaks at Mark Morris, but handled them with class and dignity. They should strive to be the kind of teammate that Baker was, the type that leads by example and doesn’t let their emotions control their actions.

All told, they should carry on the legacy of Keigan Baker, because any team could use more people like him.

World Cup 2022: Which teams qualify for the Qatar finals?

World Cup 2022: Which teams qualify for the Qatar finals?

FILE--Capital's Gavin Armitage can't quite make the reach to slow down the Monarch's Keigan Baker in a 2013 game.