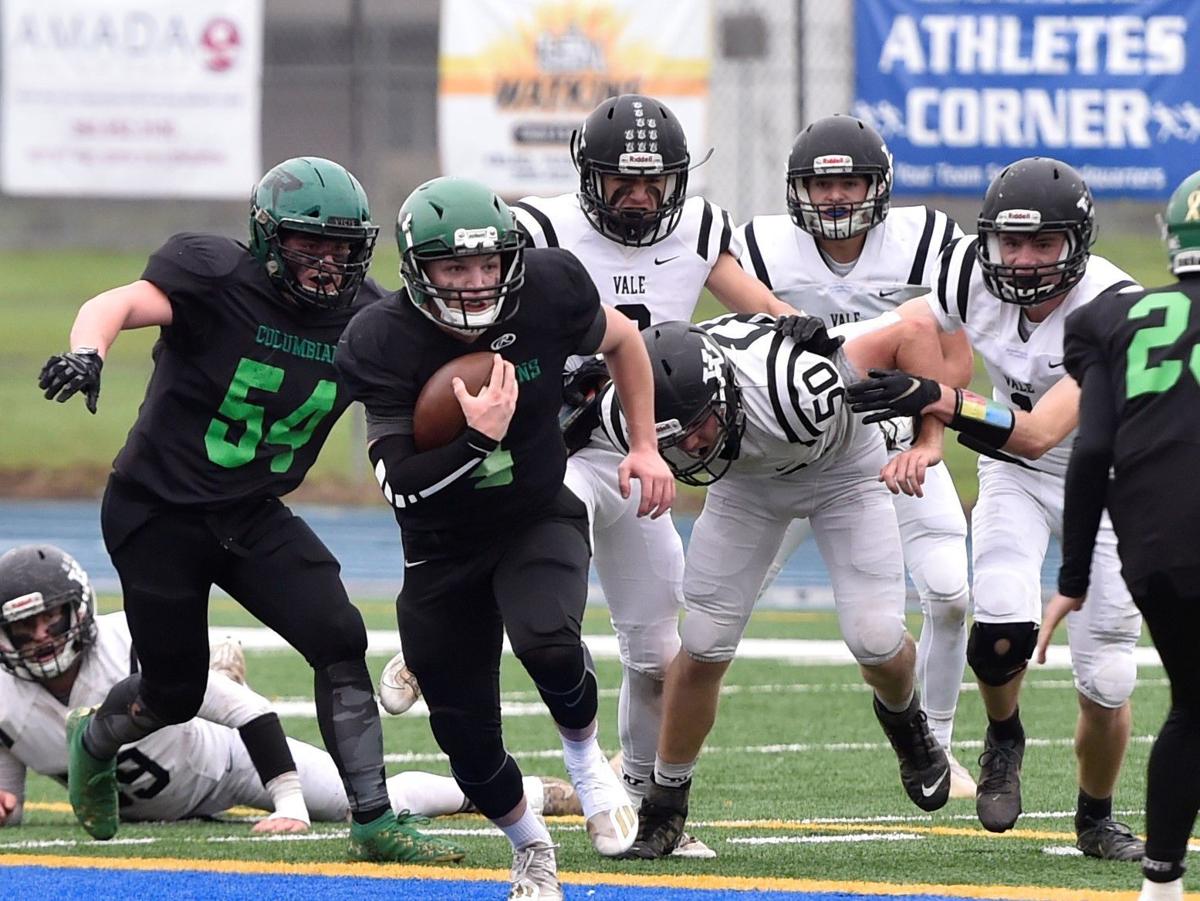 Rainier's Kenney Tripp breaks free from multiple Vale defenders as he scrambles to pick up 40 yards during the OSAA 3A State playoffs on Saturday, Nov. 13, at Kelso High School. 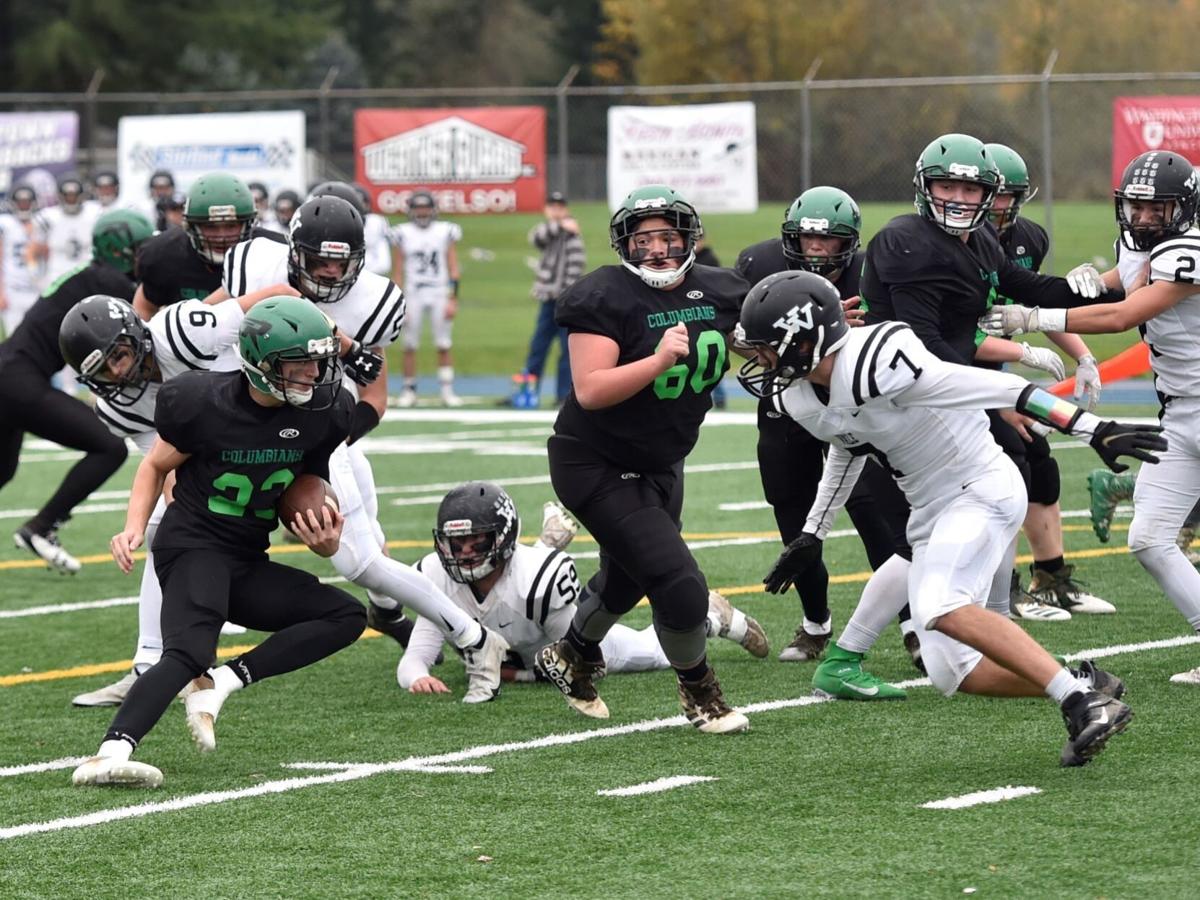 Rainier's Stone Ware cuts back to try and shake a Vale defender on Saturday, Nov. 13, at Kelso High School. 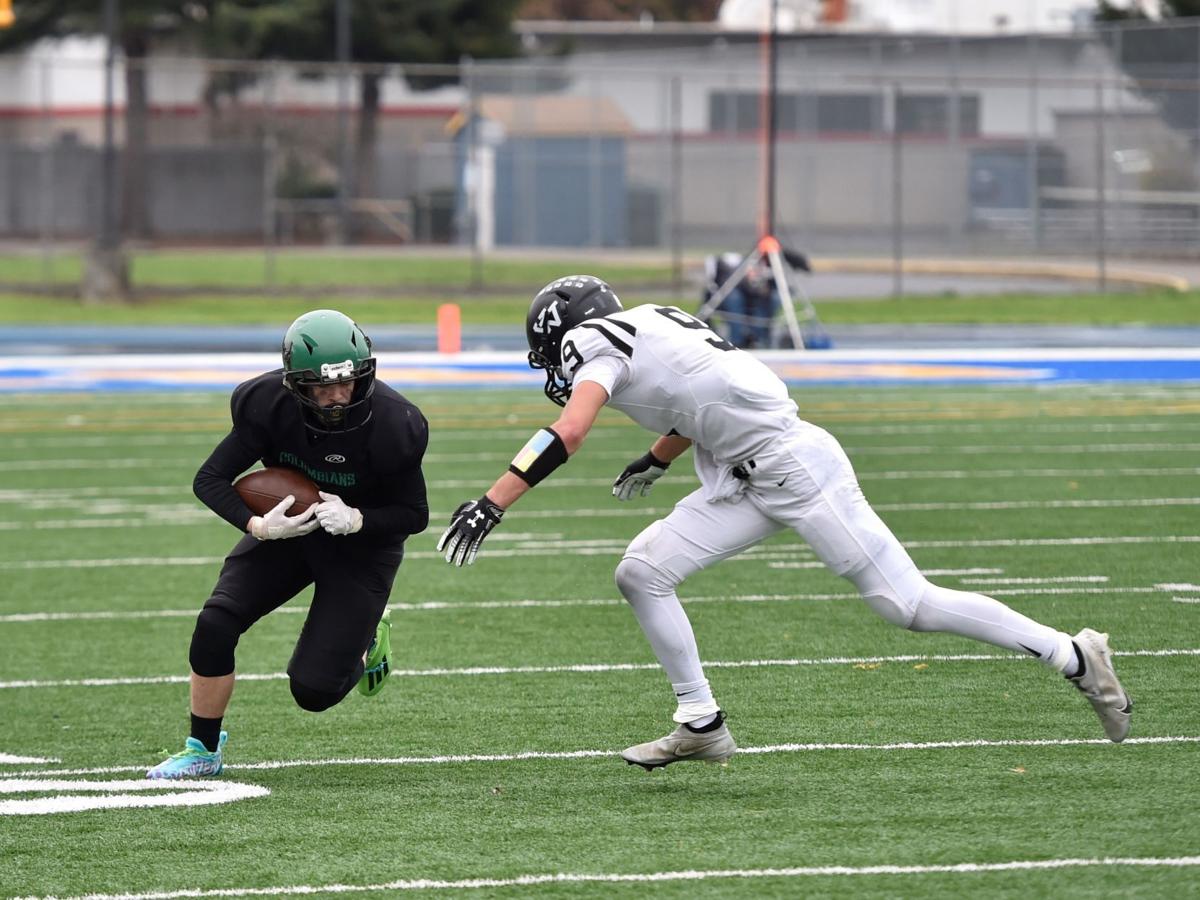 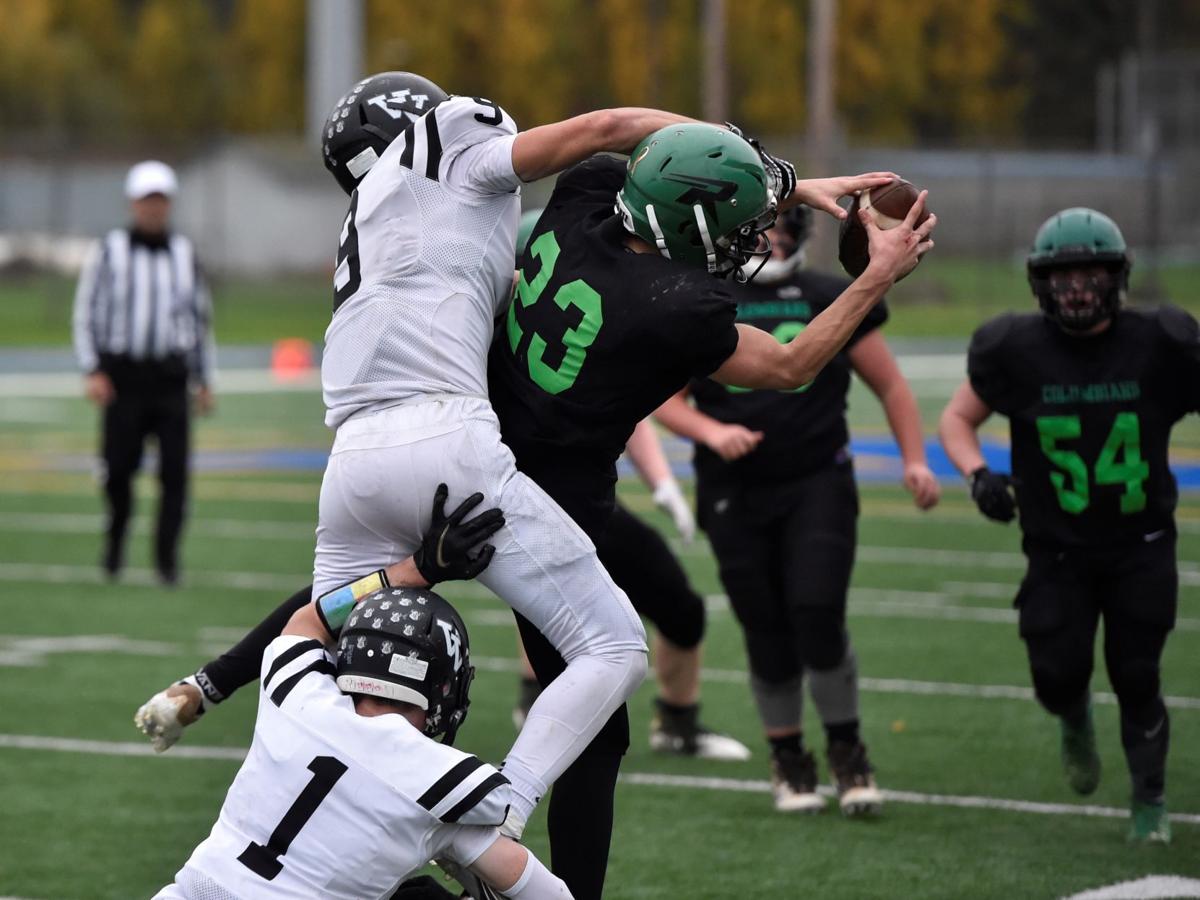 Rainier's Stone Ware ignores contact to make a catch against Vale on Nov. 13. 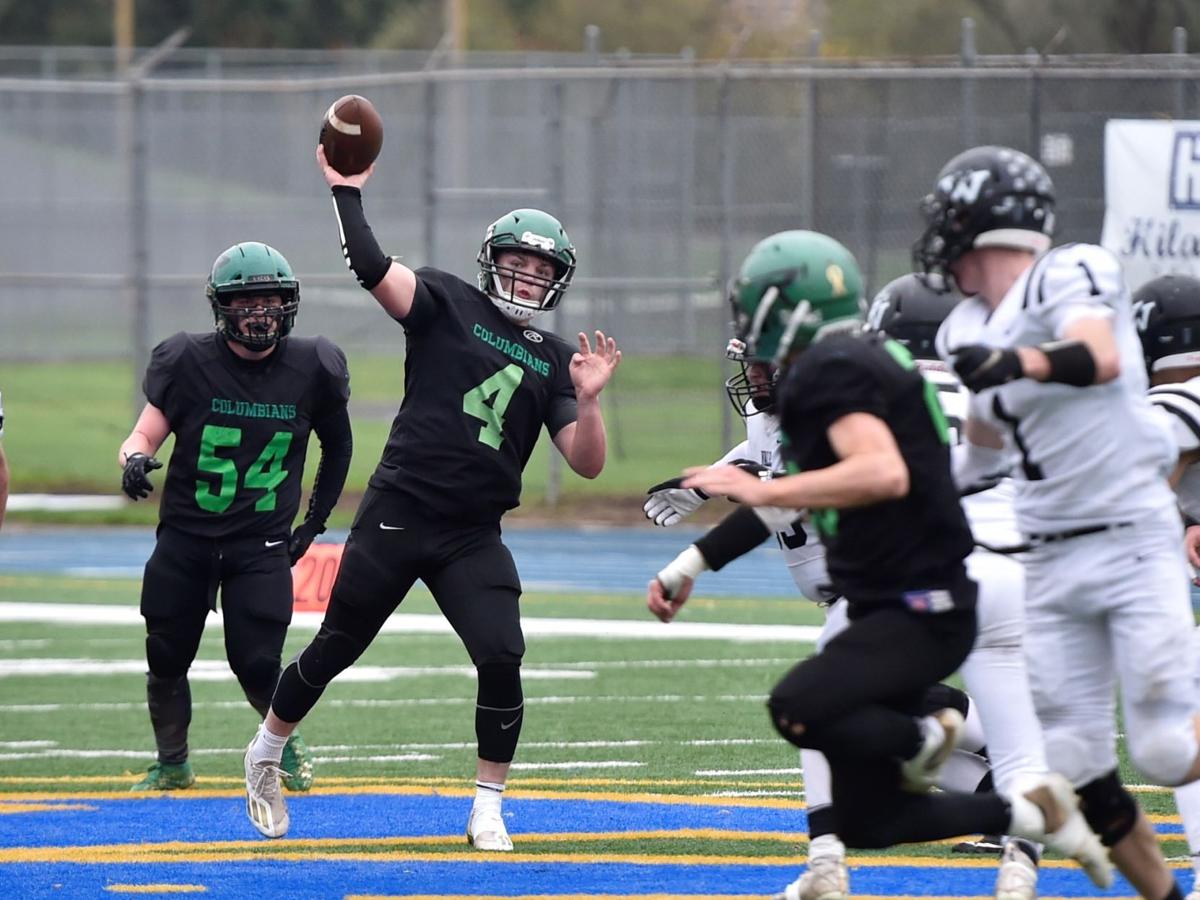 KELSO — Vale’s defense shut down the vaunted Rainier rushing attack at Kelso High School on Saturday afternoon. The Vikings played physical, shooting gaps and closing holes in a hurry, overpowering the Rainier offense in the process.

A week after the Columbians gained yards at will during a 34-6 win over Nyssa in the first round of the OSAA playoffs, the Vikings made the Columbians earn every single inch and held them to just 129 total yards on offense in a 14-6 loss that eliminates Rainier from the postseason.

“They’re just really physical, really athletic and they matched our physicality,” Rainier coach Mike King said. “They had a great game plan, which doesn’t surprise me their defense has been really good for two years. My hat’s off to them.”

The turning point came in the third quarter. After Vale already built its 14-6 lead by halftime, the Columbians needed an answer. They proceeded to take up nearly all of the third quarter on a long, grueling 18-play drive that spanned 66 yards and drained over 11 minutes off the clock.

But all that work had no payoff. Vale stuffed the Columbians on the goal line on four straight plays, standing strong and halting the mammoth drive at the 2-yard line.

“That was tough because we did exactly what we talked about at halftime,” King said. “Coming out and getting a long drive and such. So to come away with no points off that, that was tough.”

The Vikings defense was unrelenting, and it was one of only two times the Columbians were able to put together a drive and string together multiple first downs. The other came after the Vikings took a 7-0 lead at the end of the first quarter. Rainier answered with a similarly long drive, sparked by a 40-yard scramble from Kenney Tripp. But in this instance, the Columbians were able to punch it in on a Tripp run on fourth-and-goal from the 1.

The Columbians did get some life late in the game as time ran thin when Logan Chapman jumped a Vale pass and intercepted it, giving Rainier prime field position in Vale territory.

Then things got chaotic as both teams were fighting hard with time winding down in the fourth. The Vikings took the ball back by intercepting a Tripp pass. But Tripp took it upon himself to get the ball back, stripping the ball arm-to-arm from Vale’s Nathan Kimble.

But like most drives on Saturday, the Vale defense shut the Rainier offense out.

“The whole theme of the day for us was missed opportunities,” King said. “We had our chances and we just weren’t able to take advantage of it.”

The Columbians got one more chance with two minutes left after a fumbled snap on fourth-and-1 by the Vikings, but they were shutout against with three incompletions and a sack on their last shot.

“You prepare for those things in practice and all summer and just clock management and timeouts,” King said. “We did the best we could, we gave ourselves a couple chances, we just weren’t able to capitalize.”

After amassing more than 300 yards of total offense against Nyssa last week, Stone Ware was held to just 49 rushing yards on 20 carries by the Vikings. Ware also caught three passes for 18 yards.

Tripp finished with 17 carries for 57 yards to lead the Columbians, most of which came on his 40-yard run that set up Rainier’s lone score.

Rainier’s season ends earlier than they would have liked, but the Columbians still have plenty to celebrate after another run to the second round of the State playoffs.

“In all honesty, I thought we overachieved this year,” King said. “I wasn’t sure how we were going to be coming into the year, especially with the COVID thing last year. We came together and we played really well all season long.”

The Columbians played with the same grit and determination that has become so familiar for the players wearing green and black through the years.

“They play with a lot of heart,” King said. “They sacrifice and I don’t really even know how to put it into words sometimes. Every year it seems like there’s different guys that step up and these guys are never going to die easy. They fought until the end.”

The senior class, led by Ware and Tripp who accounted for the Bulk of Rainier’s offense, was the driving factor in the Columbians’ run.

“They mean everything to them. You have a four-year starter, a three-year starter…those guys have been around a long time,” King said. “It’s tough and it’s bittersweet because I am so proud of what they’ve done.”

The statistics are one thing, but King said it’s more important to replace the other intangibles that the seniors brought to the table.

“The leadership is a big thing,” King said. “We’re graduating a lot of leadership, so those younger guys do have to step up and there’s no doubt they will. We bring back some quality players that’s for sure.”

1B Football: Winlock State-bound after win over Evergreen Lutheran

WINLOCK — Every week this season, Nolan Swofford has taped up his wrist before Winlock’s game, and every week his coach, Ernie Samples, writes…

Rainier's Kenney Tripp breaks free from multiple Vale defenders as he scrambles to pick up 40 yards during the OSAA 3A State playoffs on Saturday, Nov. 13, at Kelso High School.

Rainier's Stone Ware cuts back to try and shake a Vale defender on Saturday, Nov. 13, at Kelso High School.

Rainier's Stone Ware ignores contact to make a catch against Vale on Nov. 13.