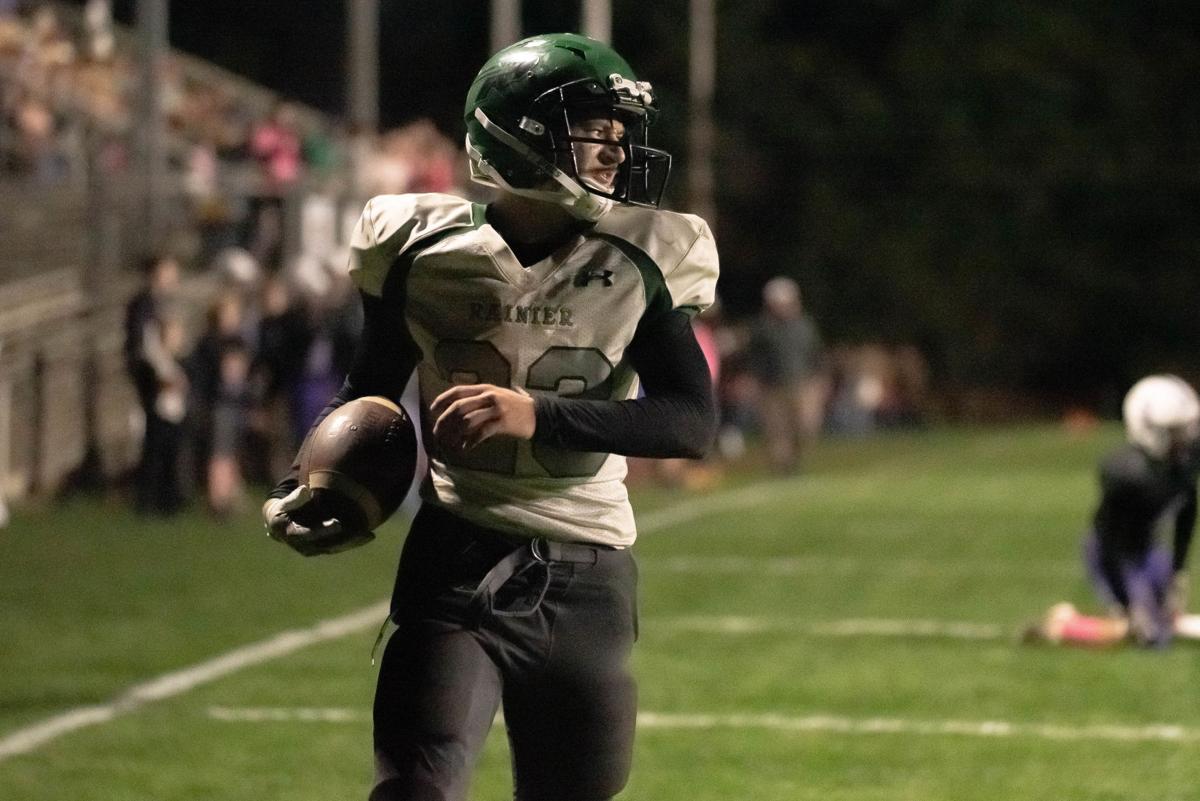 Rainier running back Stone Ware looks at back at his teammates after scoring a touchdown in Rainier's 32-12 win over Warrenton on Oct. 15, 2021, at John Mattila Field. 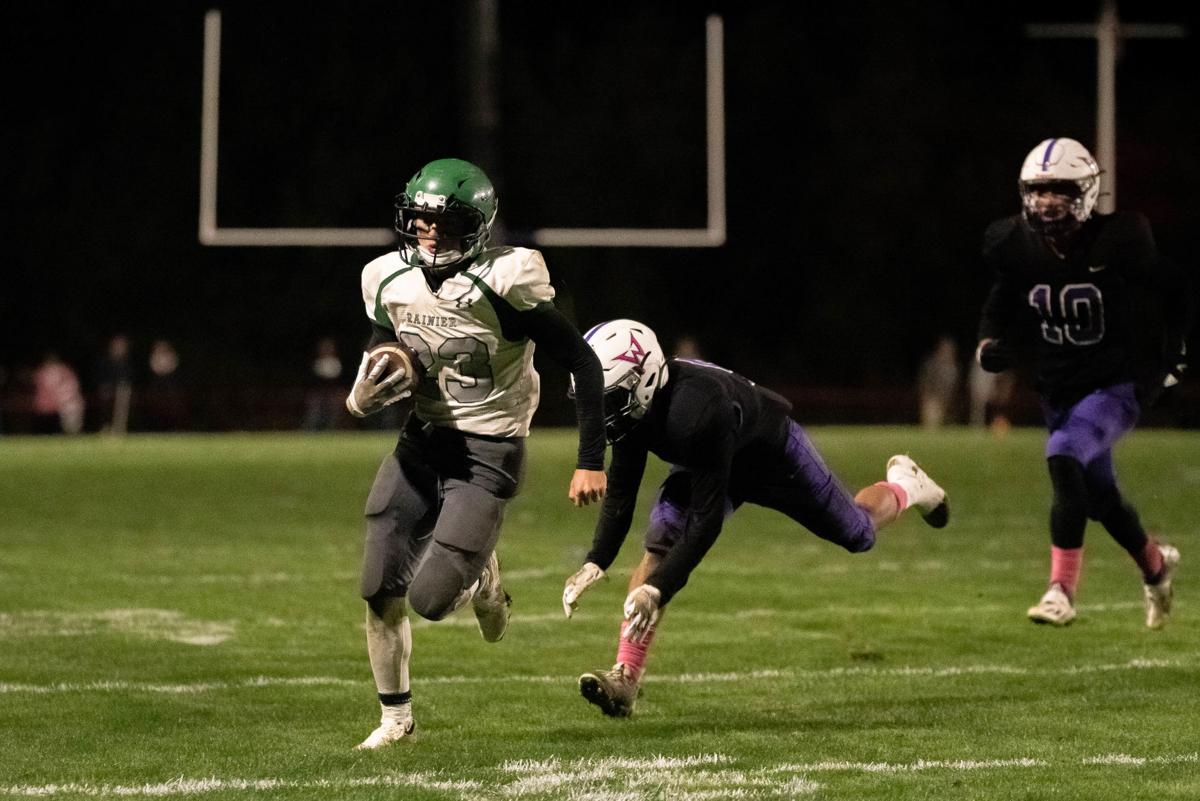 Senior running back Stone Ware escapes a tackle in Rainier's 32-12 win over Warrenton on Oct. 15, 2021, at John Mattila Field. 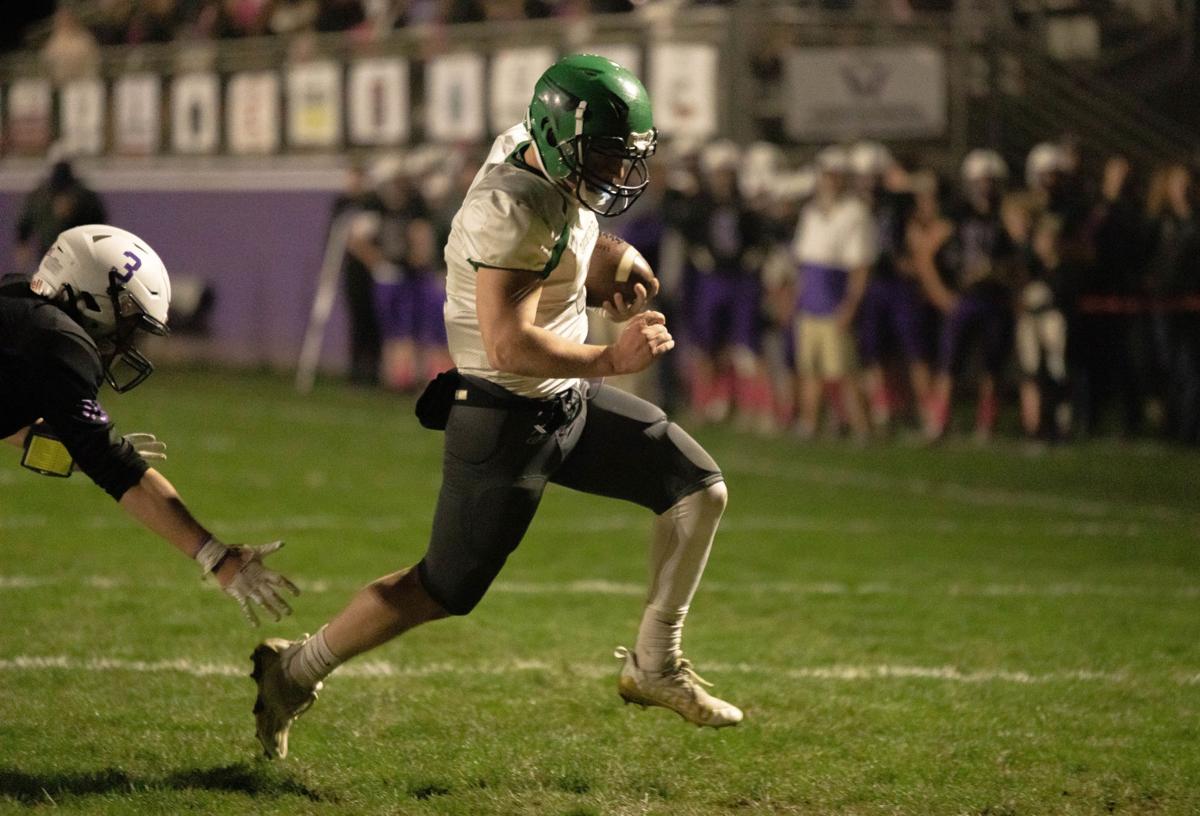 Rainer quarterback Kenney Tripp dodges a tackle in the Columbians' 32-12 win over Warrenton on Oct. 15, 2021, at John Mattila Field. 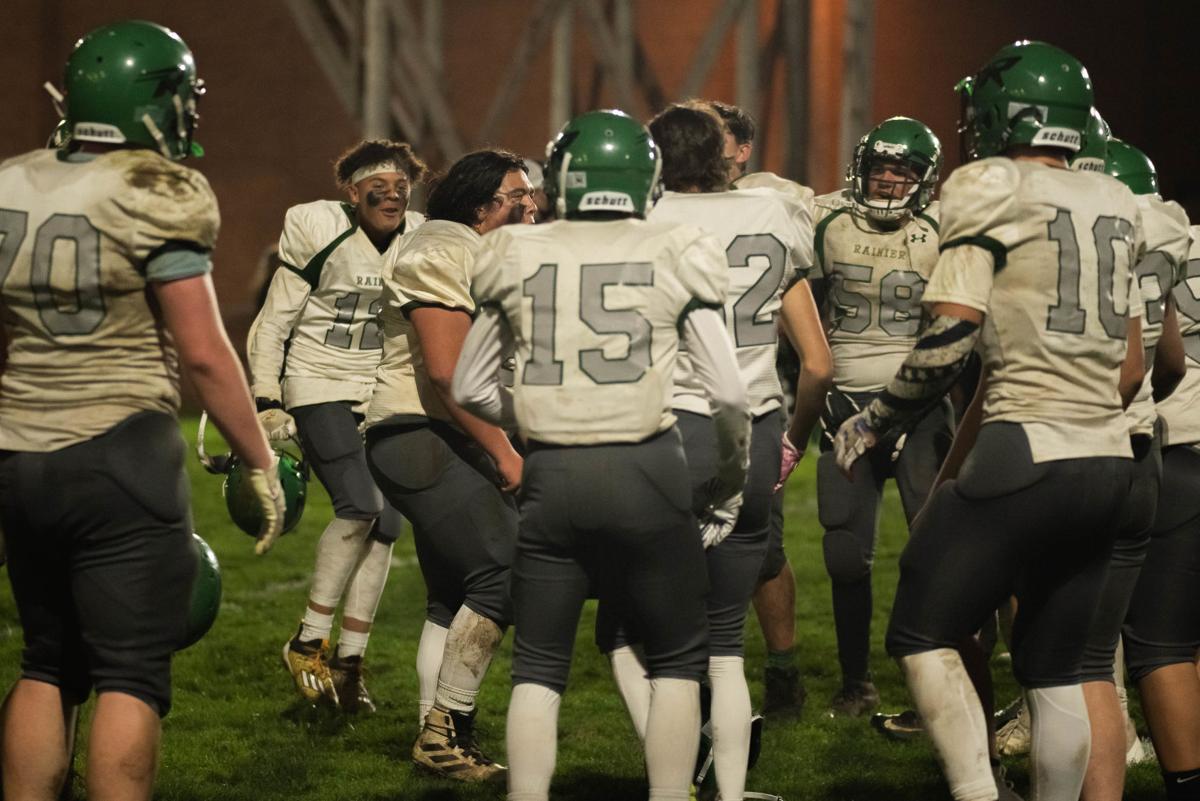 The Columbians ended up being given one chance — one single, measly shot — to win an 11-man football game in the winter season. Instead in the cruelest flurry of punches, Warrenton rolled east and beat Rainier, then COVID-19 swooped in and ended the Columbians’ season entirely.

From that point on, the next meet-up with the Warriors had been circled on every Columbian’s calendar.

“We’ve been waiting for this one,” Rainier coach Mike King said.

This time, the Columbians didn’t throw away their shot, rolling over the Warriors 32-12 where the river meets the ocean.

And they did it in the most Rainier way possible, firing up the Diesel offense and letting it rumble all night long.

Stone Ware ran like only a man with revenge on his mind can run, racking up 314 yards on 22 carries, and reaching the end zone four times.

“This is his second 300-yard game,” King said. “Those things don’t just happen by accident. He’s a heck of a back, he’s a heck of a football player.”

Quarterback Kenney Tripp added 81 yards on the ground on 15 rushes.

He only threw the ball four times — none were completed — but the Columbians didn’t need a passing game to exert this time to exert their will on their hosts, especially with how Ware was running.

“The plan going in was to shorten the rotation on the runners and pretty much split time with Kenney and Stone running,” King said. “But when you’ve got a guy with a hot hand like Stone, you’ve got to feed him.”

Not that it started the best. The Columbians fumbled away the opening kickoff, and Warrenton took the lead four minutes into the game.

“Then we got the ball, and the O-Line and Stone pretty much took over,” King said

Two minutes into Rainier’s opening possession, Ware was thundering 55 yards for his first touchdown of the night.

Ware added another score midway through the second quarter; Tripp converted the two-point conversions for both of Rainier’s first two touchdowns to give the Columbians a 16-6 lead going into halftime.

The third quarter went much the same way. Warrenton started out with a spark, narrowing the lead to four points early, but Ware, Tripp, and the Rainier offensive line were just too much to handle.

“They were just coming off the ball,” King said. “They really had a chip on their shoulder; they really feel like they didn’t play their best ball the last time we faced them. We kept talking about that for quite awhile. They were just really focused. (Hayden) Murphy and Otto Fox were kind of what drove that line. They were dialed in,”

Ware punched in a 27-yard score to make it 24-12 late in the third quarter, then put the icing on the cake with an 85-yard highlight of a touchdown to push the lead to 20 points.

On defense, it was a similar list of suspects for the Columbians. Ware added to his herculean effort on the ground with a team-high 7.5 tackles. Murphy had two sacks, while Colby Biddix and Josh Ellis both added one.

As a unit, the Columbians held the Warriors to just 2.2 yards per carry, and had seven tackles for loss.

“That was one of our main focuses — stop the run, and everything can feed off that,” King said.

Warrenton did throw for 154 yards, but Derek Katon gave Rainier its only takeaway of the game on his first career interception.

Next up for Rainier, it’s Hootenanny time, with Clatskanie set to come east next Friday.

1B Football: Winlock State-bound after win over Evergreen Lutheran

WINLOCK — Every week this season, Nolan Swofford has taped up his wrist before Winlock’s game, and every week his coach, Ernie Samples, writes…

Rainier running back Stone Ware looks at back at his teammates after scoring a touchdown in Rainier's 32-12 win over Warrenton on Oct. 15, 2021, at John Mattila Field.

Senior running back Stone Ware escapes a tackle in Rainier's 32-12 win over Warrenton on Oct. 15, 2021, at John Mattila Field.

Rainer quarterback Kenney Tripp dodges a tackle in the Columbians' 32-12 win over Warrenton on Oct. 15, 2021, at John Mattila Field.