Become a Member
Read Today's E-edition
Share This
Kirshenbaum: In the most chaotic of years, the most poetic of endings for Kalama football
0 Comments
Share this
1 of 4 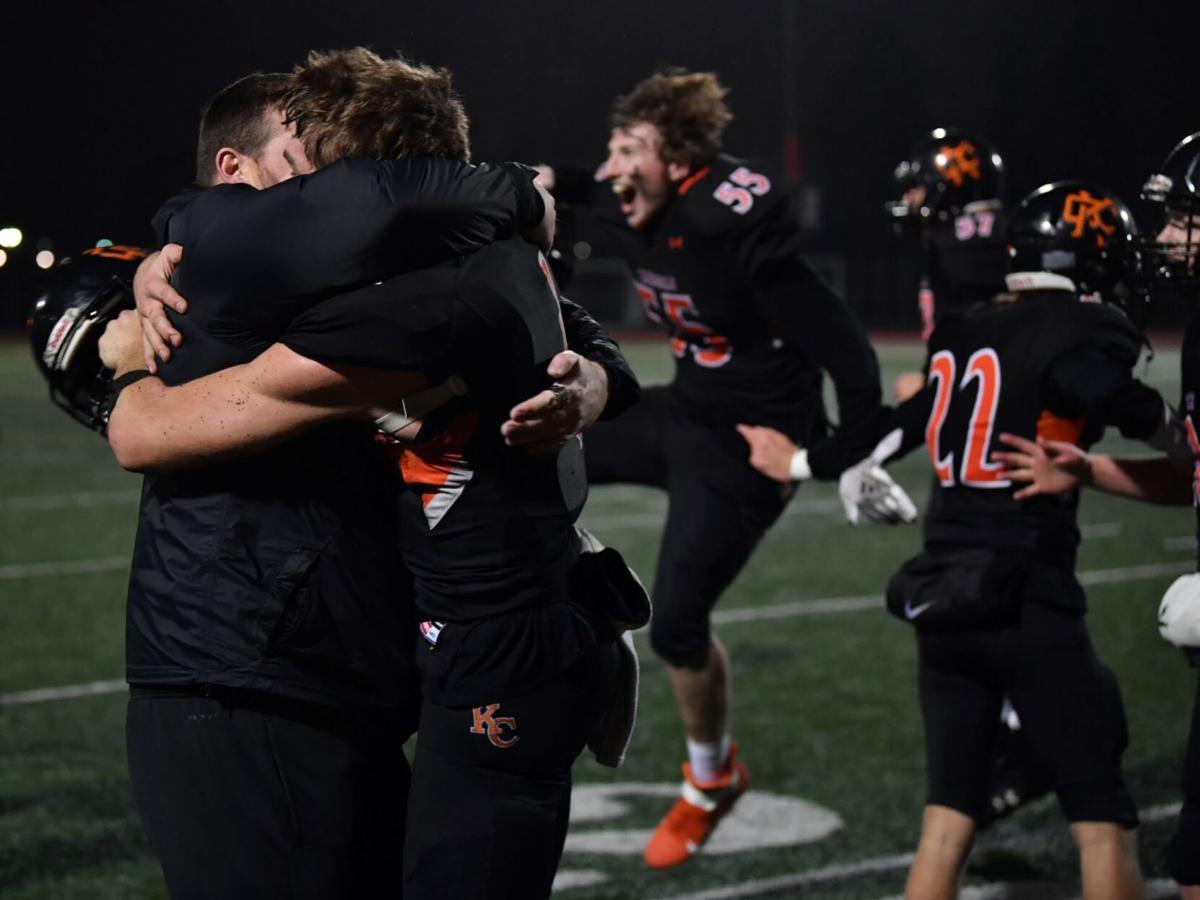 Kalama coach Sean McDonald hugs quarterback Jackson Esary in the moments after the Chinooks clinched the 2B State football championship with a 16-14 win over Napavine. Kalama senior lineman/linebacker Cody Snyder can be seen jumping for joy in the background. 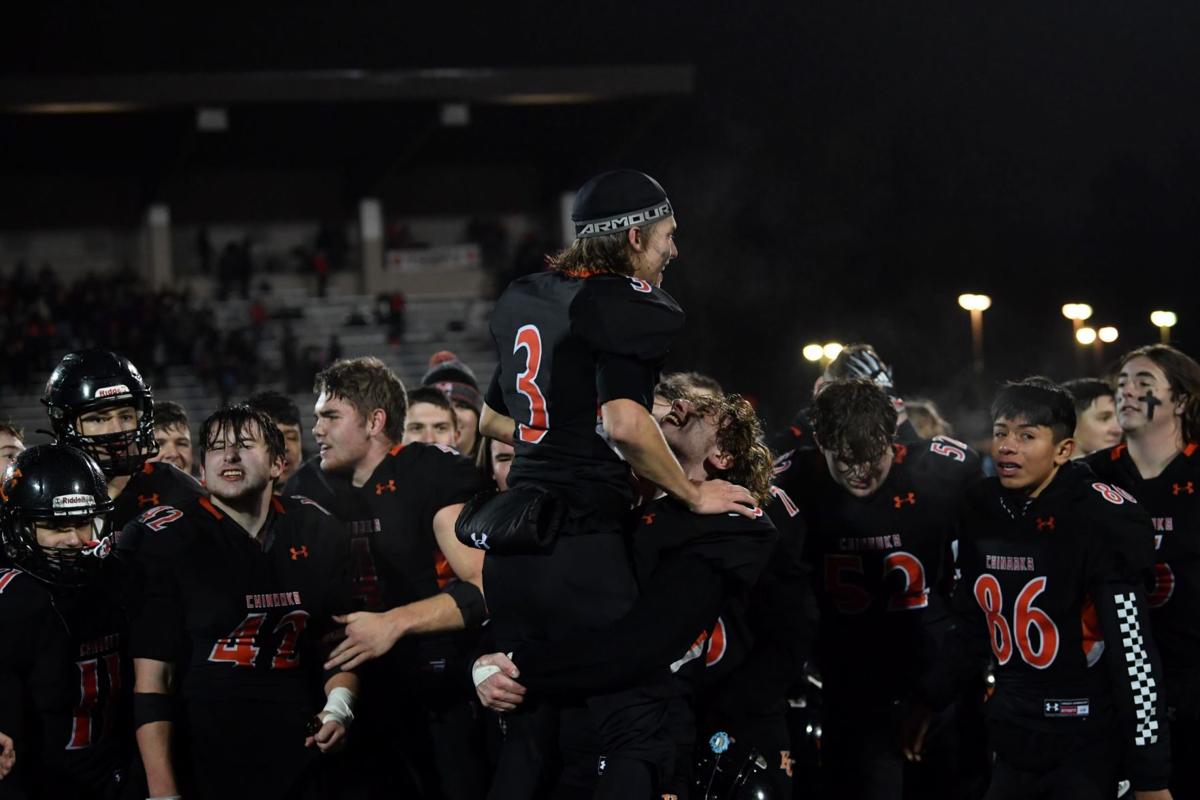 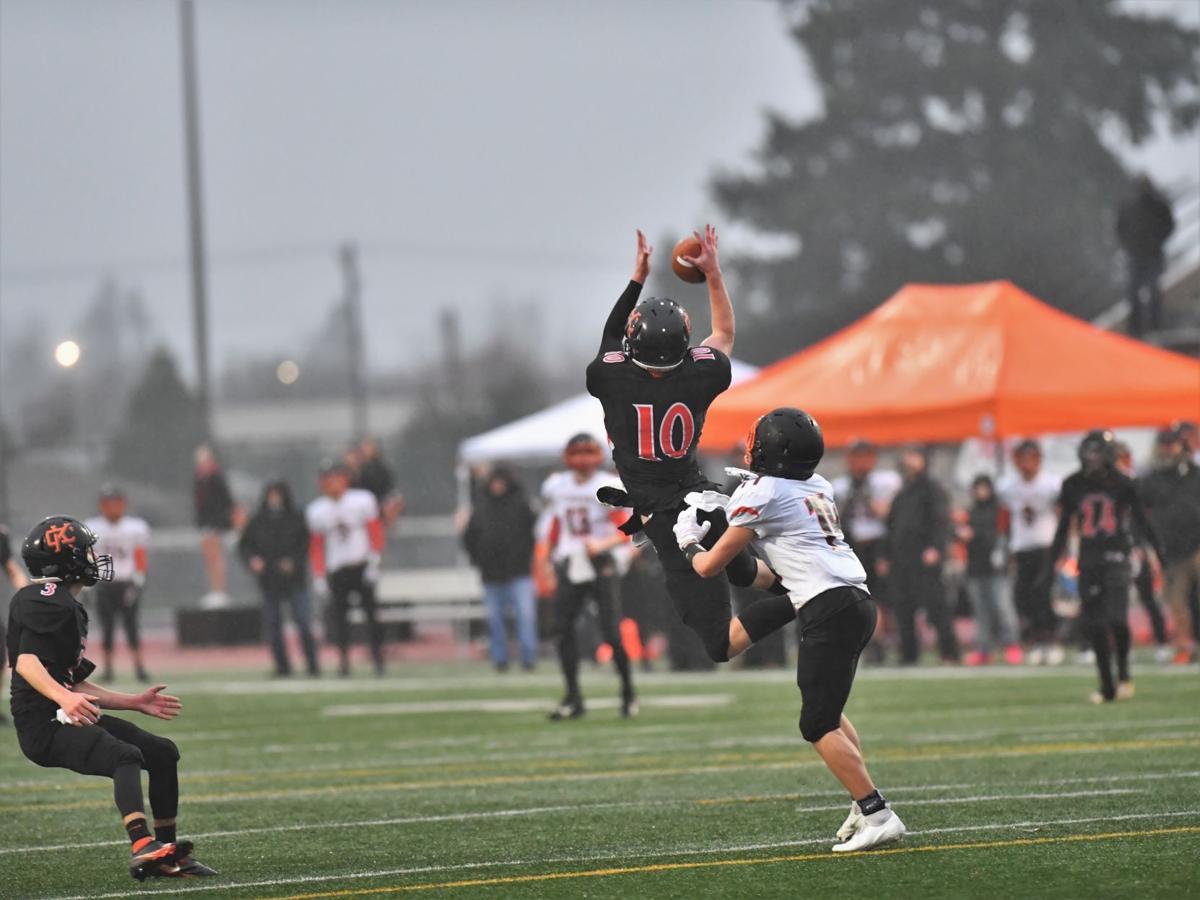 Kalama's Max Cox hauls in an interception in the first half of the State championship game against Napavine, Saturday, Dec. 4, in Lakewood. The Chinooks came back to win 16-14. 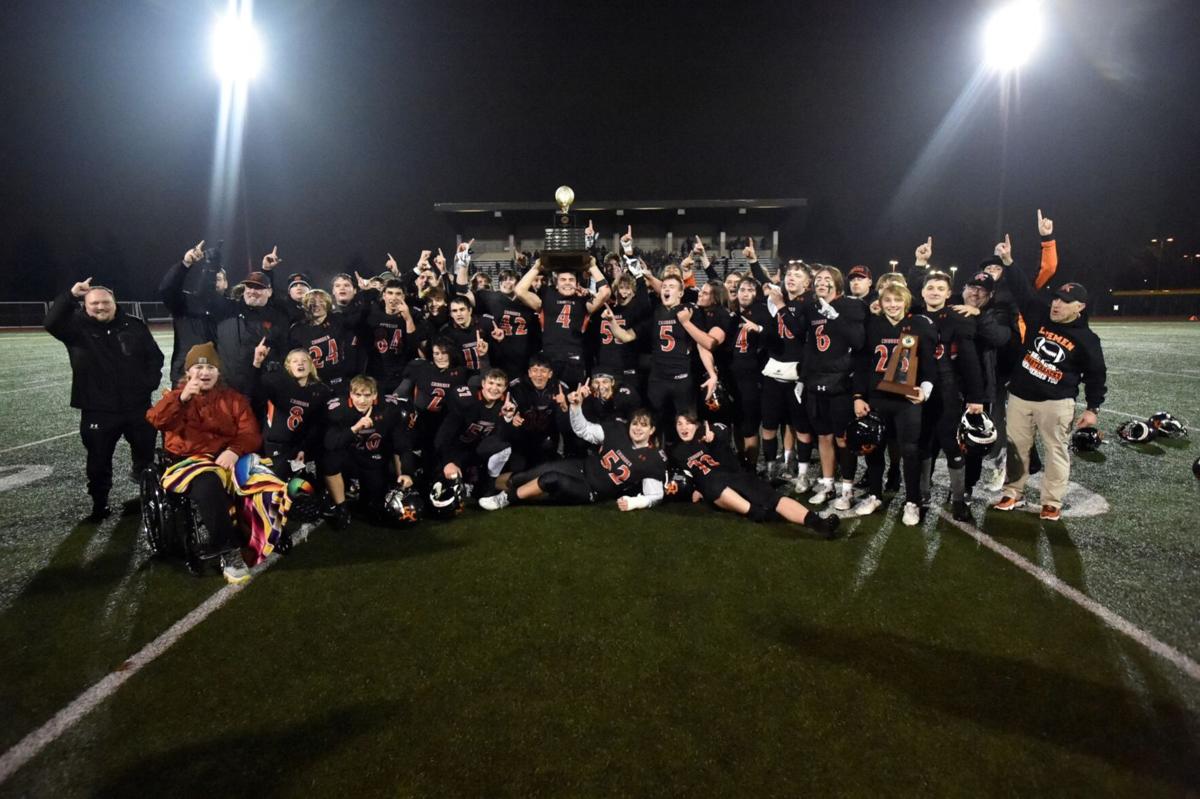 The Kalama football team celebrates after winning the State Championship over Napavine on Saturday, Dec. 7, at Harry E. Lang Field in Lakewood.

It had to end that way for Kalama.

Sometimes the storylines just line up, layered on top of each other in ways you don’t notice until you start digging through them, finding something incredibly symbolic and peeling it away to find two more poetic notes underneath.

It started when a pandemic canceled the Chinooks’ chance to get back to the mountaintop following a second-place finish in 2019. This time last year Kalama’s players found themselves sitting in limbo, waiting for a season that may or may not come. They finally got their marching orders after the new year, with just a handful of practices to prepare for a shortened winter season, and with any State hopes already out the window.

Kalama lost its opening matchup to Napavine, then came back and dominated Adna. After the win over the Pirates, Jackson Esary stood on the field at Jack Rottle Stadium in Montesano and boldly proclaimed, “I’m not losing anymore.”

The Chinooks promptly lost two of their next three games.

The winter season saw Kalama go 2-3 — notable (perhaps unfairly) as its first losing season since joining the 2B ranks. Napavine and Onalaska went on to play in what was dubbed a “regional championship” while the Chinooks lost convincingly to Forks in their finale to put them below .500. And throughout the summer and fall training camps that ensued after such a short offseason, with nearly all of his pieces returning, head coach Sean McDonald didn’t let his players forget about those shortcomings.

So yeah, to be as poetic as possible, this season obviously had to end with a deep postseason run.

After a winter season of limited capacity for fans, with the stands sparsely populated by family and possibly a friend or two, schools entered this fall season once again allowed to welcome fans, and the fans in orange and black turned out.

The home fans had to wait a few weeks because of back-to-back road games sandwiched around an unexpected bye week when Forks canceled at the last minute, but on Sept. 24, Kalama finally got to welcome fans at large back to Chinook Stadium with Adna in town. Two weeks later, every seat in the stands — and every open spot below them on the track — was filled to watch the Chinooks pummel Onalaska.

Come Saturday, traffic could only slow the northward migration of Kalama fans to Harry E. Lang Stadium in Lakewood. Seven and a half months after the Chinooks ended their season two hours from home in front of more empty seats than full ones, the families and assorted faithful got to come along this time, sit across from Napavine’s crowd, and watch the two sides play for it all.

Yeah, that was poetic too.

After a run of five games in February and March that saw Kalama’s defense struggle to stop much of anything in its games against State-level opponents — and a good deal of the opponents in District IV are State-level — the Chinooks needed something to change up front. They needed a run defense that could contain the ground and pound attack that so many Central 2B teams live off of. They needed to limit the unnecessary penalties that doomed them at times last winter. They needed to get enough stops to win games even when Esary and the offense occasionally had a drive or two fall short of the end zone.

“We needed to be a disciplined football team that did the little things right,” McDonald said.

Saturday, the Chinooks ended their season doing just that. After stymying both Onalaska and Toledo’s rushing attacks twice — once in the regular season and once again in the playoffs — Kalama held Napavine’s hyper-powered offense to 242 yards and one touchdown. The Chinooks limited SWW 2B North All-League first-team tailback Gavin Parker to 19 measly yards in the title game. Before that, the three South division first-team running backs — Onalaska’s Marshall Haight, Wahkiakum’s Gabe Moon, and Toledo’s Geoffrey Glass — averaged under 5-yards per carry in five games against the Chinooks, a number boosted significantly by a handful of big chunk plays by Haight against Kalama backups during the fourth quarter of the State semifinal.

The Chinooks ended the fall having allowed just 144 points in 12 games, after giving up 180 across just five weeks last season. In six games against schools that made their state’s Final Four — Toledo, Onalaska, Napavine, and South Umpqua (Ore.) — Kalama’s defense gave up just eight touchdowns combined.

For much of the season, while the defense was putting on clinic after clinic, the offense was going about its normal business of blowing opponents out of the water. But it was fitting for one week, on the biggest stage, that the Chinooks needed every single stop their defense gave them — and even a couple points — to win.

And yeah, it had to be Napavine, didn’t it? It was the Tigers who’d started out Kalama’s calendar year in sour fashion last February. It was Napavine who Kalama’s seniors had already played five times in three years, all but one meeting of which was decided by single digits. The Chinooks had already exorcised their Onalaska demons twice, and the Forks game had been canceled, leaving just one loss from the winter to avenge.

Saturday, they successfully avenged it. They ended a year that started choppy by capping off a perfect 12-0 fall that stretched into December. Their defense capped off a turnaround to dominance with one last signature effort. And they did it all in front of a crowd that couldn’t have even been there less than a year ago, their 18 seniors going out hoisting a trophy that wasn’t even up for grabs when 2021 began.

McDonald has now won three titles in Kalama, but this one, with everything it took to get here, might have the most poetic ring to it.

“I think we knew we were going to be good, but the perseverance of the team to really be a disciplined football team come the end of the season; we knew what needed to get done,” he said. “Any time you have a large senior class, and they all have the same mindset and are competitors… That’s what I’ll remember about this group: they’re competitors.”

Kalama coach Sean McDonald hugs quarterback Jackson Esary in the moments after the Chinooks clinched the 2B State football championship with a 16-14 win over Napavine. Kalama senior lineman/linebacker Cody Snyder can be seen jumping for joy in the background.

Kalama's Max Cox hauls in an interception in the first half of the State championship game against Napavine, Saturday, Dec. 4, in Lakewood. The Chinooks came back to win 16-14.

The Kalama football team celebrates after winning the State Championship over Napavine on Saturday, Dec. 7, at Harry E. Lang Field in Lakewood.