Two crashes blocking lanes on I-5 near Kelso, Kalama 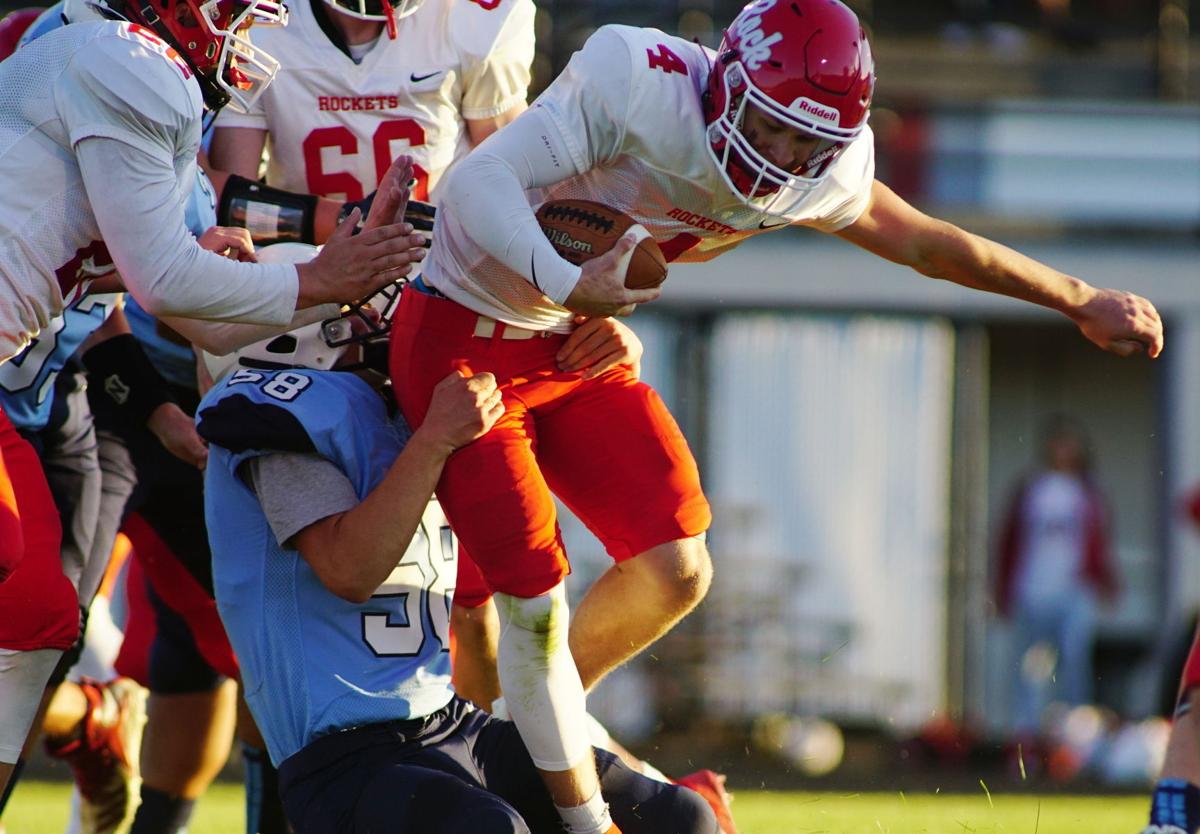 Castle Rock quarterback Chance Naugle dives forward to get an extra yard on a carry in the Rockets' 38-20 win over Mark Morris at Longview Memorial Stadium on Sept. 3 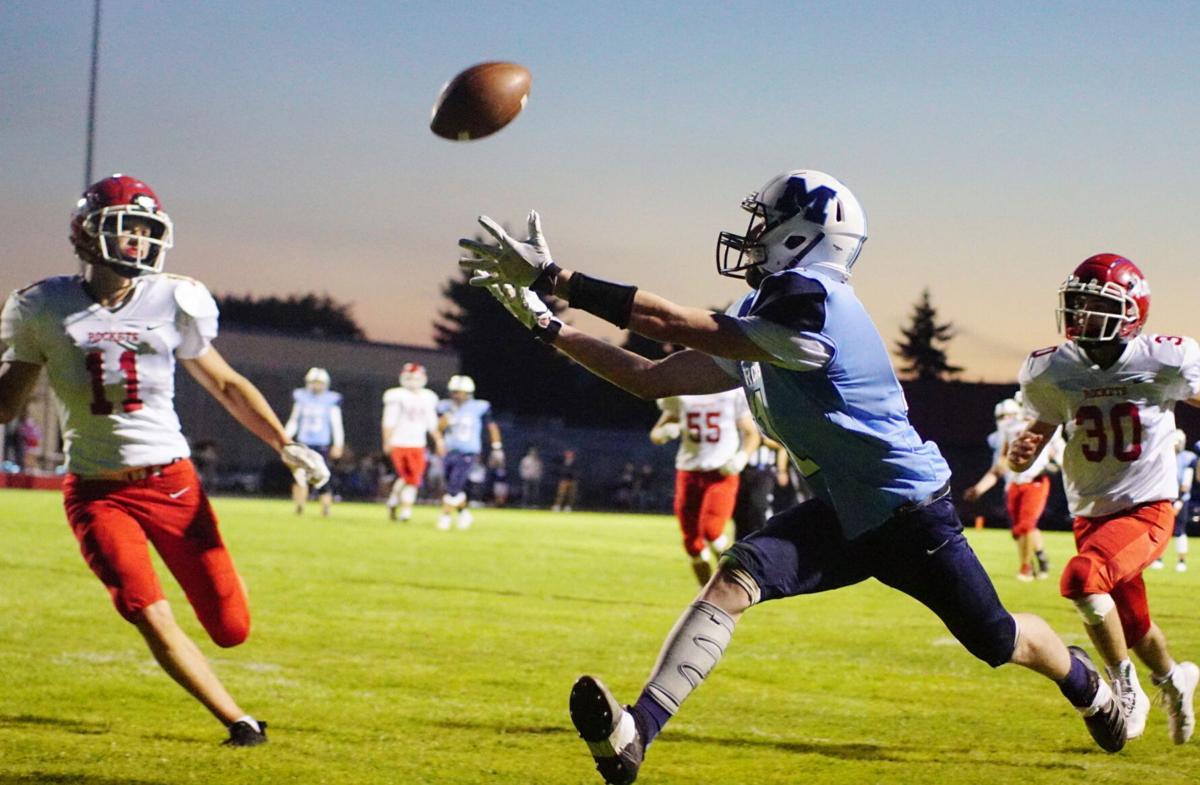 Langston Bartell brings in a touchdown catch with no time left on the clock at the end of the first half of Mark Morris' 38-20 loss to Castle Rock on Sept. 3. 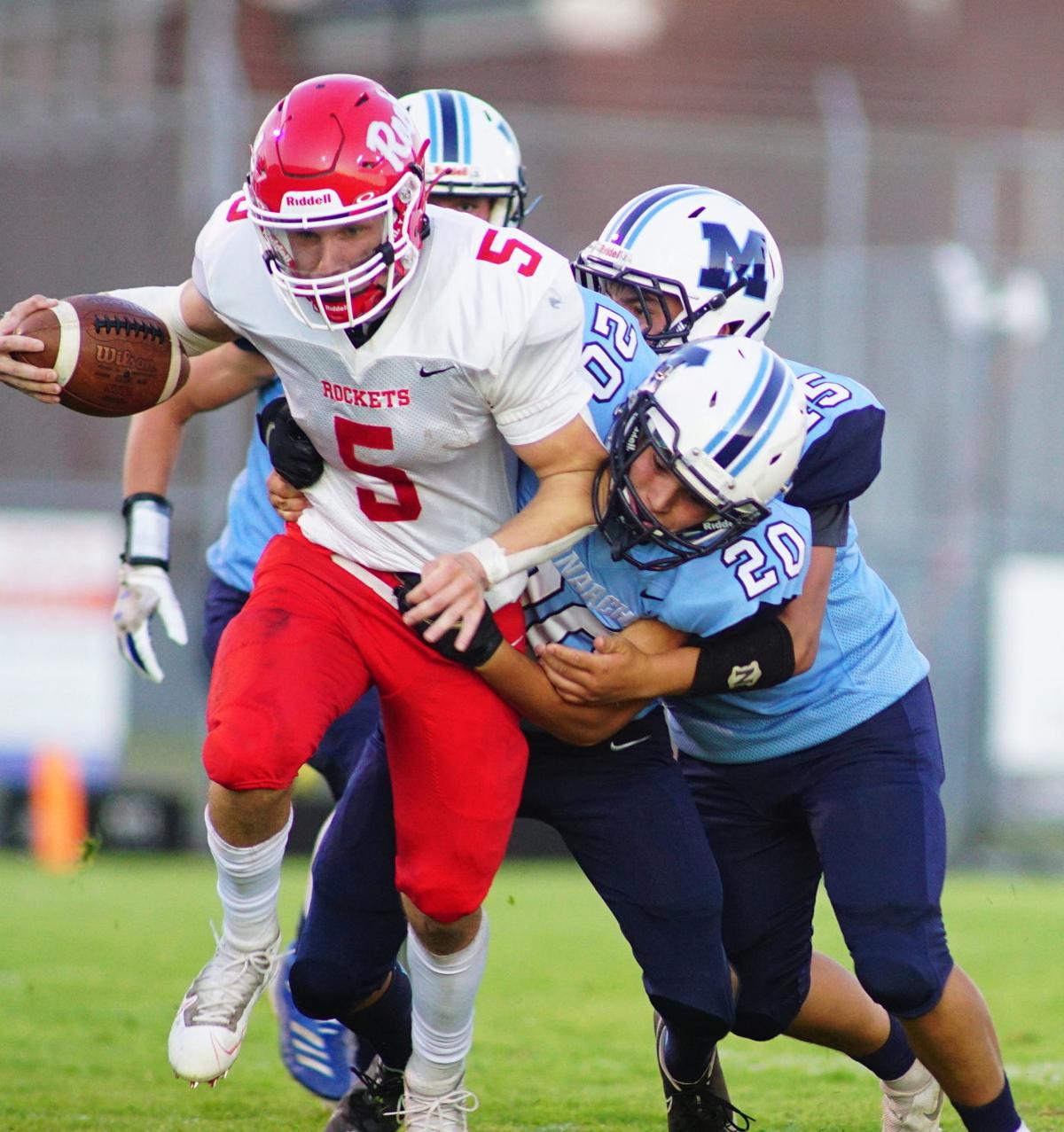 Chase Rusher does his best to power through a trio of Monarch defenders in Castle Rock's 38-20 win over Mark Morris on Sept. 3 at Longview Memorial Stadium. 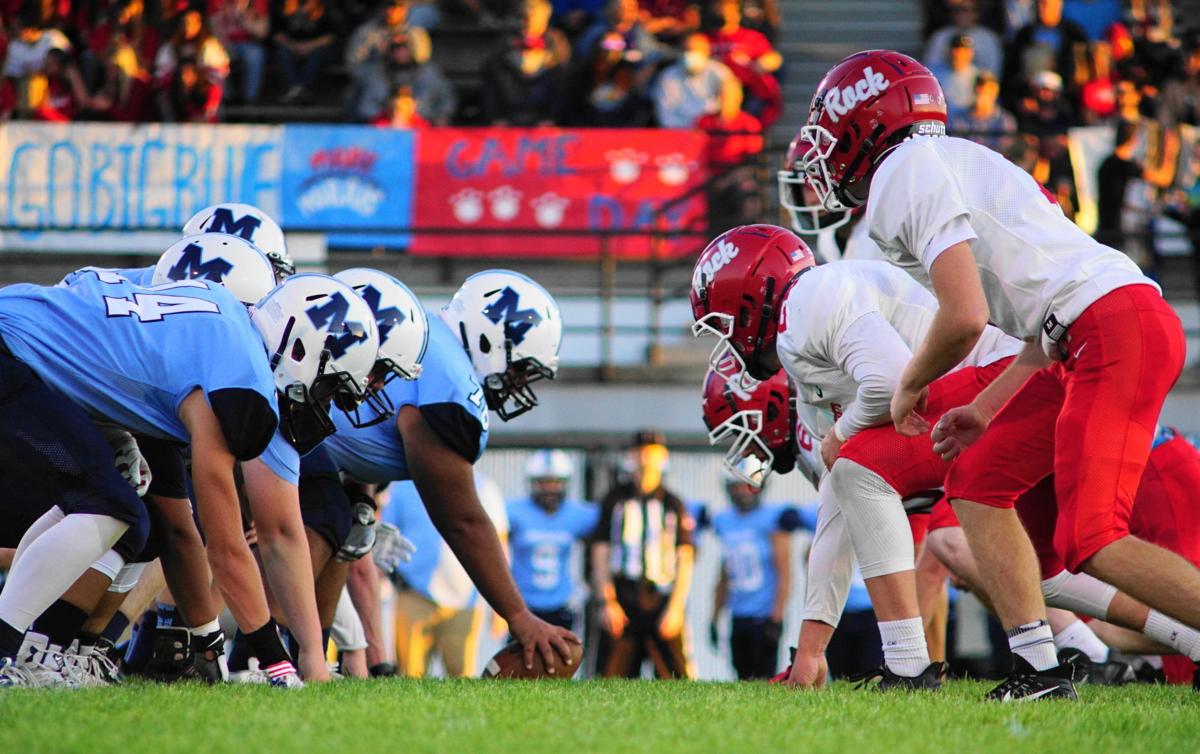 The Mark Morris and Castle Rock fronts get lined up for a play in the two schools' matchup at Longview Memorial Stadium on Sept. 3. The Rockets jumped out to and early lead and held it to the end, winning 38-20.

At the start of every football season, plenty of teams take a little time to get things figured out. That’s why high school teams start off with a nonleague schedule, to get the kinks out early.

On Friday night, Mark Morris was one of those teams that needed some time to get their feet under them, but Castle Rock came in ready to launch. The Rockets rode a piping hot start to a 38-20 win to kick the season off with a win over a school in a higher classification.

“Starting off with a victory at the beginning is fantastic,” Castle Rock coach Aaron Gehring said.

Castle Rock quarterback Chance Naugle was a difference maker for the Rockets as he combined for five total touchdowns. Naugle led the team in rushing as well as passing with 142 yards on 10 carries on the ground and three rushing touchdowns on the night.

The Rockets deferred the coin toss and shut the Monarchs down on the first possession, sacking Mark Morris QB Kellen Desbiens twice in his debut drive as a starter to force a turnover on downs and give the Rockets great starting field position for the offense to take over.

Naugle led Castle Rock down the field in four plays and capped the drive with a 13-yard touchdown pass to Lane Partridge to make a statement early and put the Rockets up 8-0 after a successful 2-point try.

The Rocket defense shut down the Monarchs again, forcing a three-and-out, then Naugle proved the Rockets were there to play. He dropped back to pass and saw the field clear and took off running up the middle before breaking down the sideline on a 55-yard touchdown scamper to give the Rockets a 14-0 lead.

“We talked to Naugle about the game plan,” Gehring said. “It’s roll out, then on the rollouts if you don’t see it open right away, you go to the second one and then tuck it and go and that’s what he did. Even moving in the pocket, he was very efficient on that.”

Naugle followed the game plan to perfection and used his legs do damage all night long, making it tough for sack-hungry Monarch defenders to catch up.

“Once I dropped back the tackles pushed the D-ends back and that just opens up the middle and when I see that it’s go time,” Naugle said of what he saw in the MM defense.

On the other side of the ball, the Castle Rock defense continued to swarm to the rock and shut down the Monarch offense. Mark Morris looked confused and out of sync from the start — because they were. The Monarchs were down four offensive linemen and a tight end, who were held out of the game due to contact tracing stemming from COVID-19 concerns.

“Having some different guys in there, our timing was way off…we’ve never played like this ever before and now all of a sudden we are,” Mark Morris coach Shawn Perkins said.

Mark Morris would eventually settle in along with their new signal-caller, but not before the Rockets hung another score on the board to make it a three-score game in the first quarter.

Running back Chase Rusher was the catalyst on the drive for Castle Rock as he toted the ball four times for 59 yards on the drive including a 27-yard run that took the Rockets down to the 1-yard line. Naugle punched it in two plays later for his second score on the ground and the Rockets finished the opening quarter with a staggering 22-0 lead.

With the first behind them, it didn’t take the Monarchs long to find the scoreboard after flipping the field. Just 22 seconds into the second, George Mosier broke through and broke down the sideline for a 32-yard touchdown, and the Monarch collective in the crowd took a deep breath — although it didn’t last too long.

The Rockets marched right back down the field where Naugle connected with Partridge once again from 21 yards out on a back-shoulder fade and the Rockets kept rolling.

The Monarchs continued to find their groove to try and answer the high-powered Castle Rock offense. Rylan Jewell returned the kickoff deep into Rocket territory to help the Monarchs find the zone on a 1-yard run up the middle from Mosier.

The Monarch defense continued to struggle to find ways to stop the Rockets attack, and Castle Rock marched right down the field again and found the end zone with Naugle running it in from five yards out with just 36 seconds left.

Then, Desbiens showed a spark. He settled down, faced the pressure brought on by the mismatched offensive line and led the Monarchs on a sprint down the field. He lofted a swing pass to open field for Deacon Dietz to run under for 32 yards down to the 26. Then, with just five seconds on the clock, Desbiens lofted a deep ball to Langston Bartell, who burned his defender, and steal a score from the Rockets as time expired in the half and cut the lead to 38-20, taking a lot more confidence into the locker room than they would have without it.

“I think he really did a nice job,” Perkins said of Desbiens. “He grew a lot right off the bat there and did a good job doing that. He settled down.”

With the momentum, the Monarchs gave themselves life entering the second half, but after an offensive showcase and 58 total first-half points, both defenses took their turn in the second half.

The Rockets fumbled to start the half, giving MM prime field position at the Castle Rock 25, but four straight incompletions shut that drive down. Then the Monarch defense held the Rockets from scoring for the first time all game, and a defensive battle broke out.

Castle Rock had multiple looks at the end zone, but the Monarchs found ways to keep them out. First was a goal line stand, then one-handed pick from Dietz in the end zone shut down another Rocket drive. Finally, the rushers chasing Naugle got through, after the Rocket QB changed direction twice, the Monarchs caught up and forced a fumble, yet another way to stop the Rockets.

The Monarch offense found some movement, but their only real threat at the end zone came on the final drive of the night. The Monarchs took over with over six minutes left and nearly drained the clock on a 13-play drive that ultimately wound up stalling out at the 12-yard line.

Naugle and Partridge’s strong connection helped drive the Rockets, in addition to Naugles running ability. The duo connected on five passes for 87 yards and two touchdowns for Partridge.

“He’s a baller…He’s just so good with the ball in his hands,” Naugle said. “It’s crazy what he can do.”

Naugle finished the night 11-for-23 for 144 yards and the two TDs to Partridge. Rusher was second on the team on the ground behind Naugle with 15 carries for 93 yards.

For the Rockets (1-0), the win against a bigger foe is something that they can build confidence from before they head to Ridgefield next weekend to face another squad from the 2A GSHL.

“We love anytime we get a chance to play Mark Morris, R.A. Long — local,” Gehring said. “It gets the fans out and the community around where the guys are just excited. This is a fun local rivalry.”

Now the Monarchs (0-1) have to reevaluate and bounce back as they get players returning from their respective quarantines. Perkins said the knowledge gained by the younger players who stepped in can only be a positive moving forward.

“Some of those kids, they got a bunch of good experience out of the whole deal,” he said. “That adds some depth.”

Playing from behind, Desbiens was forced to throw the ball 35 times in his debut. He completed 18 passes for 197 yards in the process.

“I think he reacted well when he made a mistake tonight, which shows growth as a quarterback,” Perkins said. “You’ve got to have a short memory.”

The Monarchs will try to right the ship next week against Aberdeen.

SEATTLE — This time last week, with a road matchup in Oregon next on Kelso’s schedule, Steve Amrine certainly didn’t expect to be leading his …

Happy Friday, it’s another loaded week of football in the area. With area teams playing games in seven different counties in Washington (and t…

LA CENTER — In the shortened winter season, Kalama was on fire until it got into a close game.

RAINIER — The Rainier Columbians came out blazing against Amity and rode a 28-point first quarter to a comfortable 57-22 win over Amity on Friday.

VANCOUVER — After a shaky start to the season, Mark Morris picked up its first win as well as its first 2A GSHL League victory on Friday night…

﻿2A Football: Washougal blows out Woodland

WASHOUGAL — An injury-riddled Woodland squad fell behind early and couldn’t recover in their first 2A Greater St. Helen’s League game of the s…

OAKVILLE — Toutle Lake finally had a breakthrough on Friday. Things fell into place for the Ducks as they destroyed the Oakville Acorns 66-20 …

Hilanders to play under Seattle lights

The Kelso football team was supposed to head south for its game this weekend. Instead, it’ll be going north.

2B Football: Toledo blows out Stevenson

STEVENSON — There were plenty of possible hang-ups the Toledo football had to work through in its Thursday matchup at Stevenson, from a short …

Castle Rock quarterback Chance Naugle dives forward to get an extra yard on a carry in the Rockets' 38-20 win over Mark Morris at Longview Memorial Stadium on Sept. 3

Langston Bartell brings in a touchdown catch with no time left on the clock at the end of the first half of Mark Morris' 38-20 loss to Castle Rock on Sept. 3.

Chase Rusher does his best to power through a trio of Monarch defenders in Castle Rock's 38-20 win over Mark Morris on Sept. 3 at Longview Memorial Stadium.

The Mark Morris and Castle Rock fronts get lined up for a play in the two schools' matchup at Longview Memorial Stadium on Sept. 3. The Rockets jumped out to and early lead and held it to the end, winning 38-20.