Become a Member
Read Today's E-edition
Share This
'All eyes were on us': Kalama makes statement with domination of Onalaska
0 comments
Share this 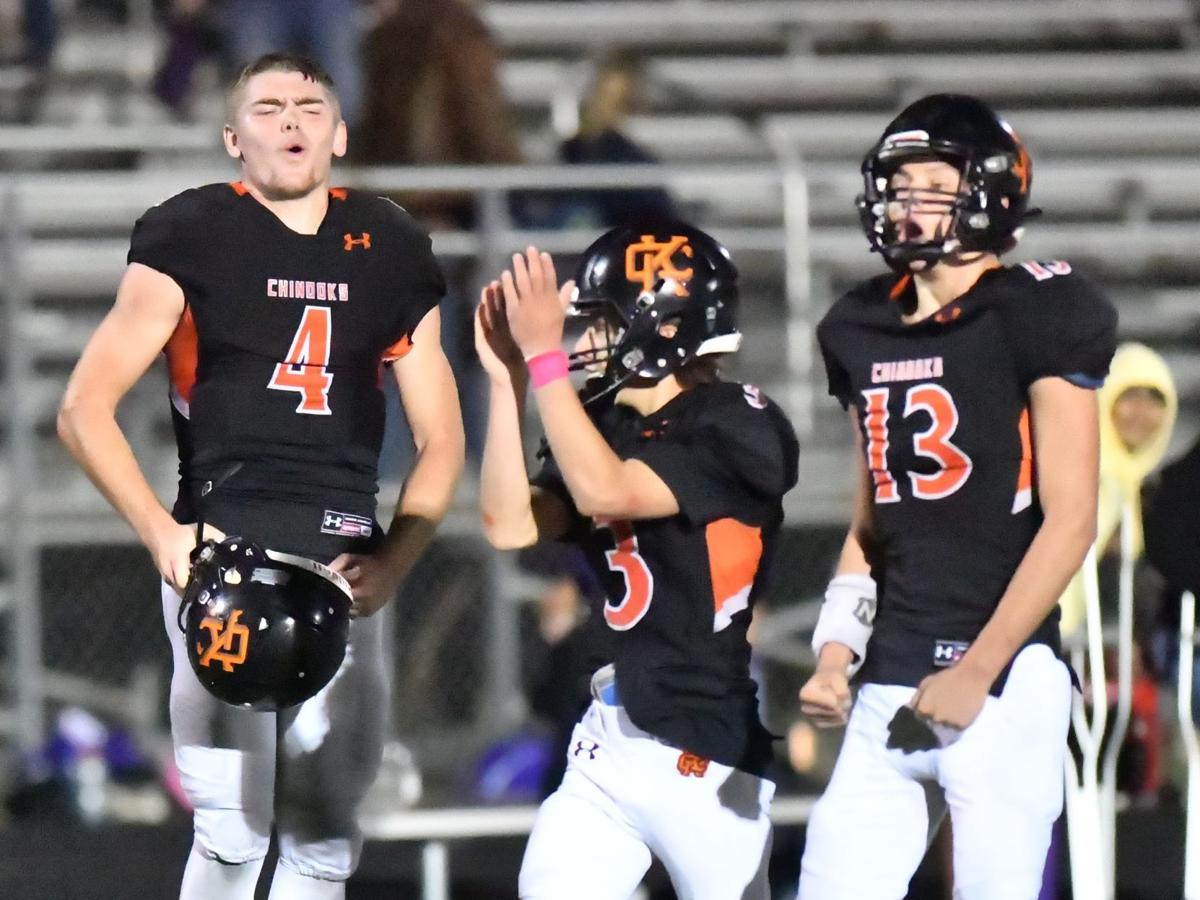 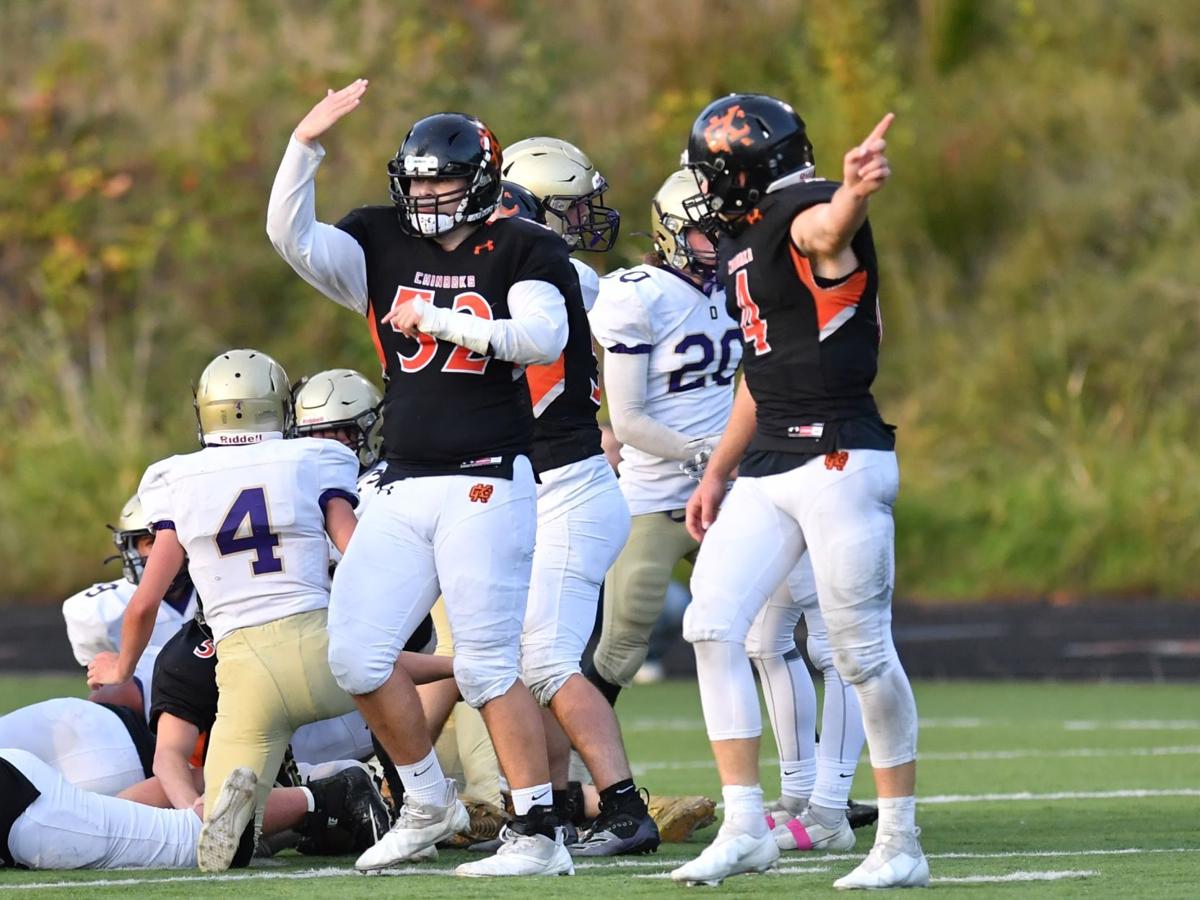 Kalama's Preston Armstrong (52) and Jackson Esary (4) signal in their direction after the Chinooks recovered a fumble against Onalaska on Oct. 16. 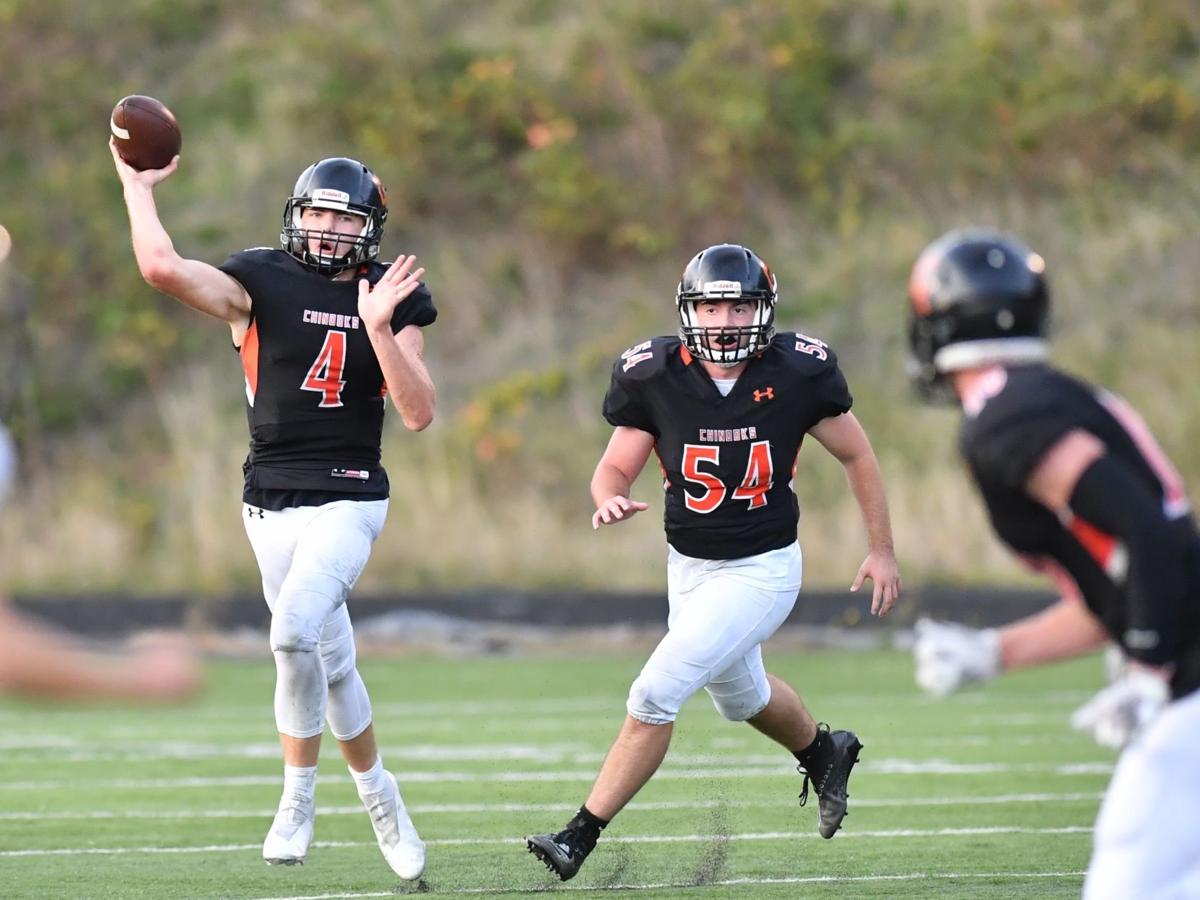 Kalama quarterback Jackson Esary (4) throws downfield for Max Cox while Gino Santi (54) moves out to block against Onalaska on Saturday, Oct. 16, in Kalama. 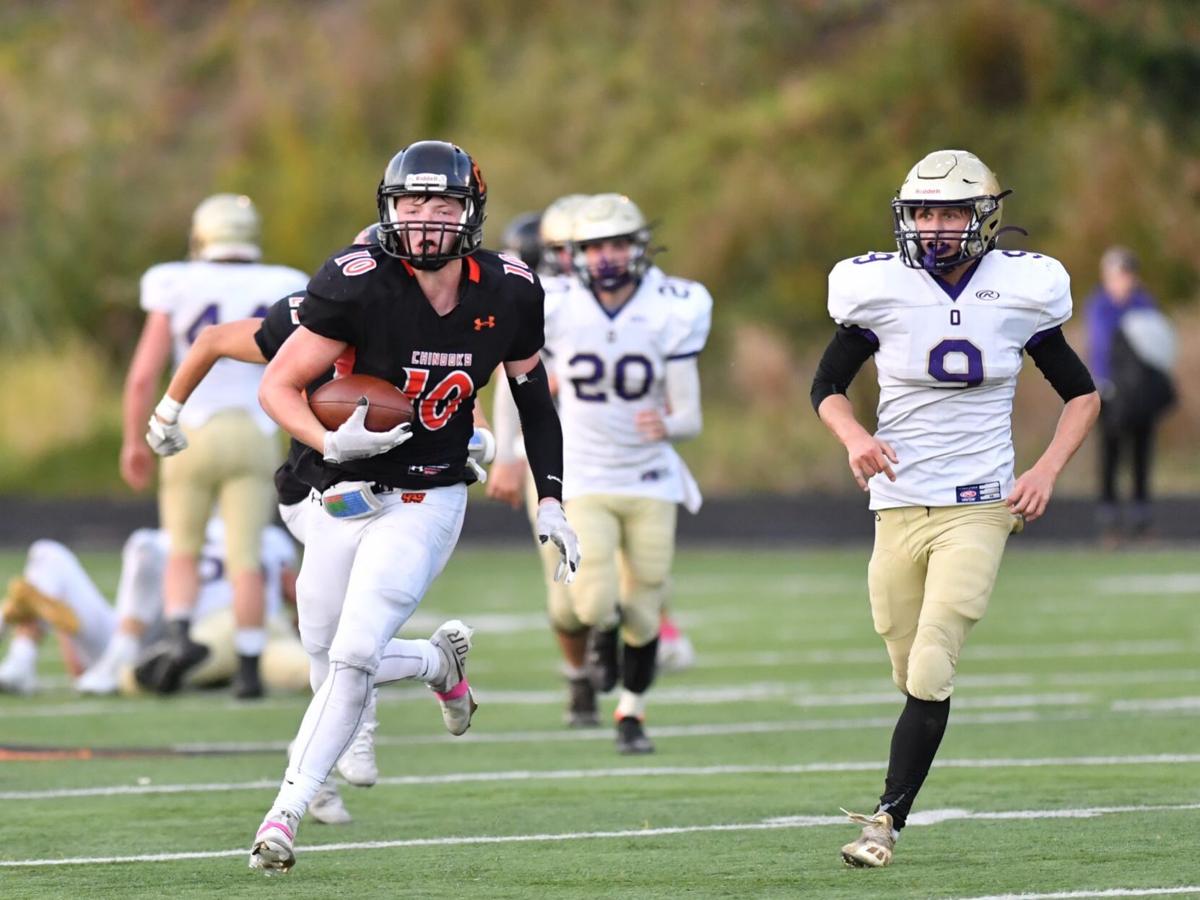 Kalama receiver Max Cox breaks away from Onalaska defenders as he turns up field on Oct. 16 in Kalama 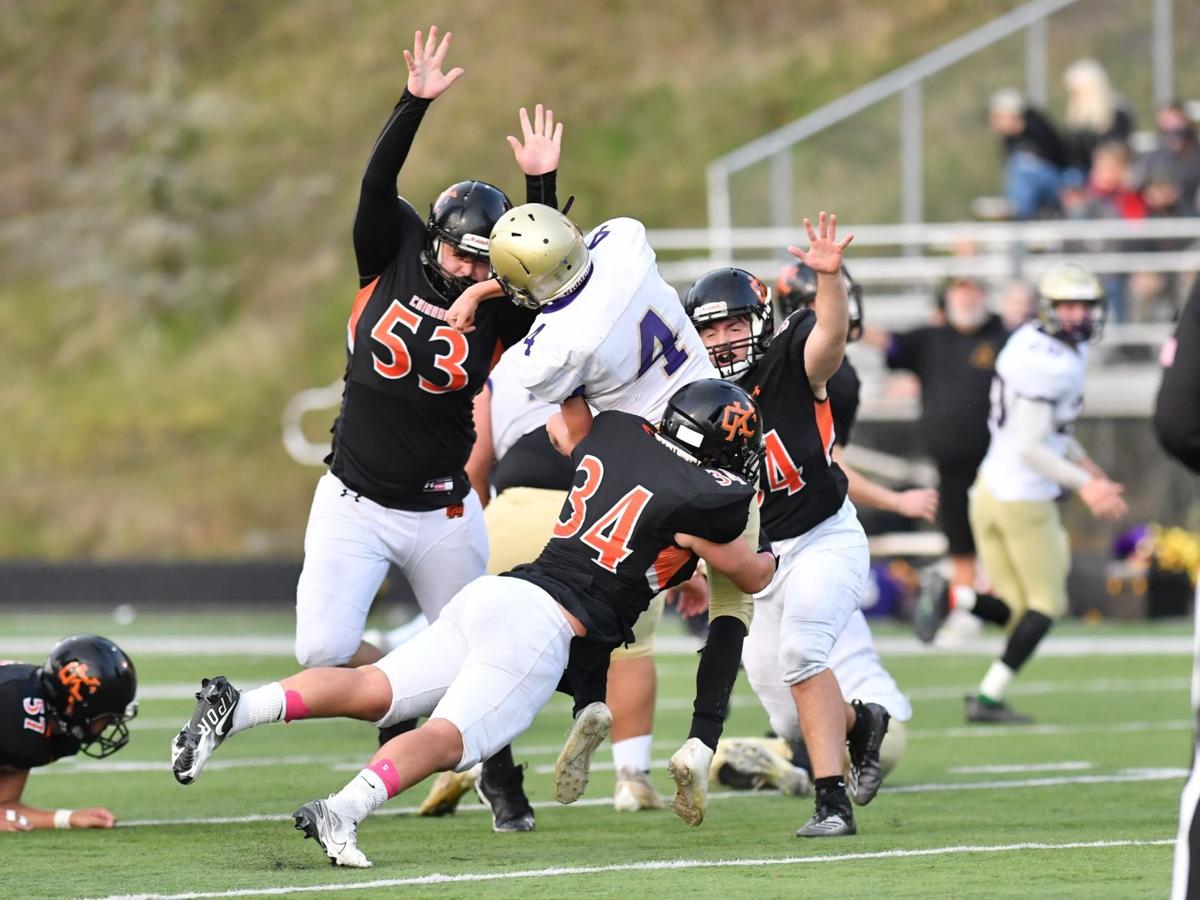 Kalama's Gage Beck (53), Todd Tabor (34) and Gino Santi (54) meet in the middle to hit Onalaska quarterback Kayden Mozingo just after he released a pass on Oct. 16. 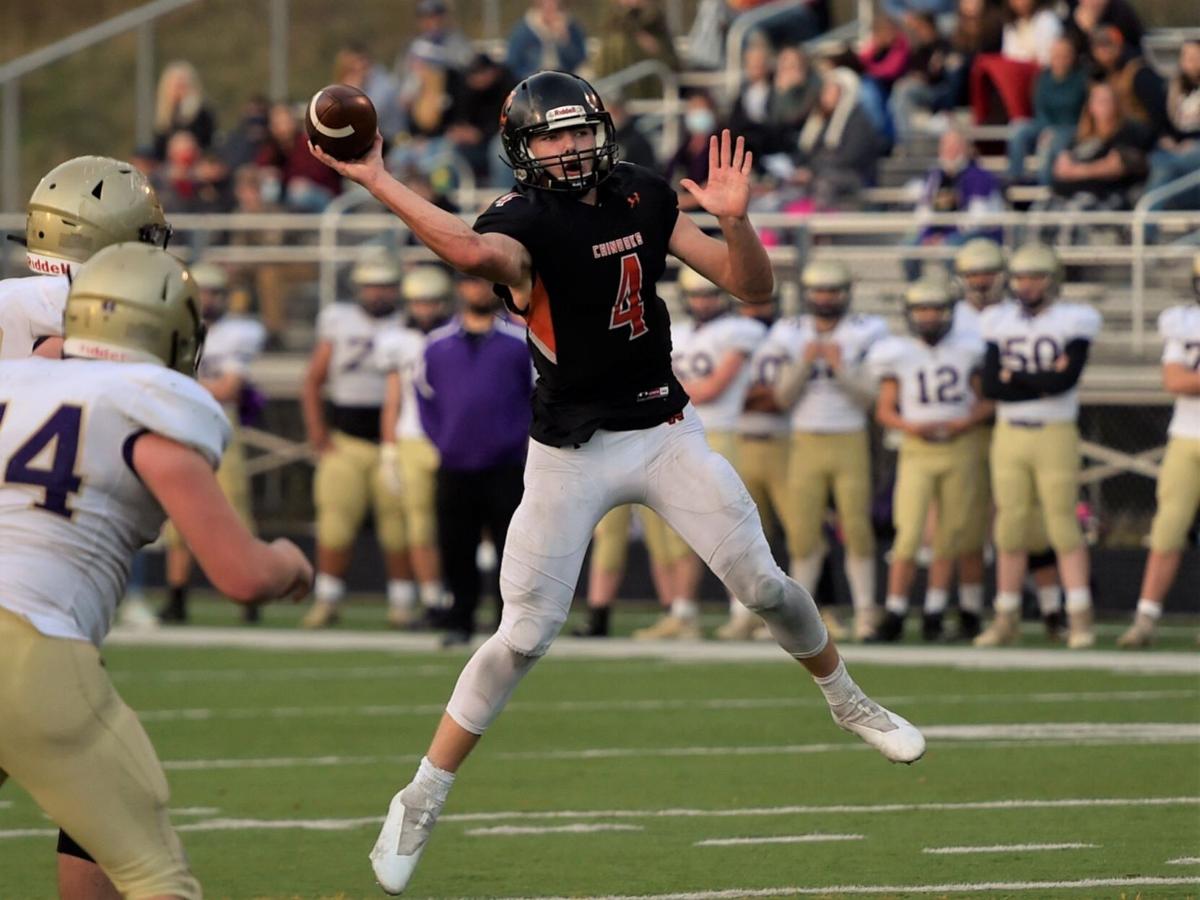 Kalama quarterback Jackson Esary fires a pass across his body on a two-point conversion against Onalaska on Oct. 16.

KALAMA – All the animals in the District IV 2B jungle came up the hill Saturday.

There were Napavine Tigers, ruling their own, northern roost. There were Riverhawks and Ducks and Mules, and even the odd Pirate in the crowd, out to see what they thought would be an epic struggle between the two most recent state champions.

“They were here to watch us, and see what we could do against this team,” Kalama quarterback Jackson Esary said. “This was our biggest game of the season so far. It was a big game for the whole 2B level, and I think all eyes were on us to see what we could do.”

Instead, they saw the Chinooks throw down their most prominent challenger in the 2B South Division in punishing fashion, demolishing Onalaska 58-6 in a rout absolutely nobody saw coming.

Last year, Kalama and Onalaska traded blows back and forth in a duel for the ages, a matchup that set the 2B world buzzing with its points and physicality. The year before – in the postseason – was much the same. It’s been a rivalry watered with blood, sweat, the occasional vomit, and a heaping of bad feelings, and it all came to a head Saturday.

This was something completely, different though. This was a beatdown, when all those feelings bubbled out on one sideline, as the Chinooks kept coming back to the bench screaming to keep the pedal to the medal and get more.

Or, as senior Jack Doerty put it more succinctly:

“We hate their guts for last year, for sure. That’s what our mindset was, for sure: come in, kill ‘em, get out.”

That’s exactly what the Chinooks did, but the method by which it happened may have been the biggest shock of the night. The 58 points they scored was one thing – this is Kalama after all, with Esary slinging it to Doerty, Max Cox, and a host of other receivers.

But told hold Onalaska to six points, after the Loggers slugged past them for 68 in the winter? That was new.

And it started right away, from the opening kickoff.

Only one thing didn’t go according to plan: Kalama didn’t win the toss.

Onalaska won the flip and took the ball. On the Loggers’ first play from scrimmage, Marshall Haight took the ball up the middle, ran right into a pile at the line of scrimmage, and lost the ball. Kalama recovered, and seven plays later, Esary hit Doerty on an 8-yard rollout to start the scoring.

But when the Loggers got the ball back and started their first real, sustained drive, nothing much changed. With Esary and Doerty lined up at opposite outside linebacker spots, the Chinooks did what they’d been unable to do for years: stop Onalaska’s run game.

“We won the game up front,” Esary said. “When you play a team like this, the game is won at the line of scrimmage. Our D-line and our linebackers, we held our gaps. We held them good. If you hold your gaps and you flip them to the outside, then you make tackles, that’s how you beat a team like this.”

Onalaska ran the ball 51 times for 216 yards – averaging just over 4 yards per carry. But the Loggers only three runs go for more than 10 yards, while the Chinooks held them to 2 or fewer 20 times.

When Onalaska did get something going, it never went anywhere. On their second drive, the Loggers worked inside the Kalama red zone, but stalled out on fourth-and-7 to turn it over on downs. Three drives later, they got to the red zone again but fumbled it away.

The only time Onalaska got inside Kalama’s 20-yard line in the second half, they made it as far as the 10, before Doerty jumped a screen pass and took it 90 yards back for a pick-six that made it 52-6 and triggered the running clock in what was supposed to be a slugfest for the ages.

The Loggers’ only points of the night came in a wild stretch at the start. Haight’s fumble on the opening play ended up being the first of three turnovers on the first plays of drives in the first 14 minutes; the second was a Kalama fumble at its own 7-yard line, and Onalaska needed just two plays to punch it in and cut the Chinook lead to 8-6.

But Kalama needed just one to get the points back. Taking over his own 20, Esary let loose for the first time of the evening, finding Doerty over the top on a 70-yard bomb to make it 14-6.

“I saw a linebacker inside and nodded at Jackson,” Doerty said. “He threw a perfect pass, touchdown thanks to him.”

Kalama only ended up running 29 plays on the night – to Onalaska’s 58 – but the Chinooks outgained their guests 413-262.

Much of that came down to Esary. The senior shined with the whole league watching him, going 10-for-13 for 257 yards and four touchdowns and adding 140 rushing yards and three more scores on 11 carries. Doerty and Max Cox both had four catches; the former had 101 yards and two touchdowns, while the latter had one score but led the Chinooks with 148 receiving yards.

Onalaska got a spark of hope late in the second quarter, when a fluke play saw Cox take a huge hit going over the middle, jarring the ball out of his hands a good 5 yards back to the line of scrimmage, where it fell into the lap of a Logger lineman. But the Onalaska offense went three-and-out – it did that three times in the first half alone – to give the Chinooks the ball back at midfield with less than a minute left.

Esary and the offense needed just three plays to score to make it 36-6 at halftime. Then, Kalama got the ball to start the second half, Doerty took the opening kick to the Onalaska 35-yard line, and the Chinooks needed three plays to score again, with Esary tossing to Jaxxon Truesdell and the junior willing himself through two defenders at the goal line.

“That’s what we do: we score and we score quick,” Esary said. “We’re an air-pressure team, and that’s our offense – get the ball and score.”

Then Doerty took back his pick-six, and as he crossed the goal line, the ball raised in his right hand, the pure domination reached its zenith, and all the Riverhawks and Mules and Tigers and Pirates were there to see it.

Now, it’s on to the next week; Kalama (6-0) will host the same Toledo team that was in the stands enjoying what it saw next Friday, and it’ll do so having made quite the statement.

“We can play with the best of them,” McDonald said. “And we’re ready to make a run at it.”

"This leg will never be what it used to be", but Tiger is 'on the positive side'

"This leg will never be what it used to be", but Tiger is 'on the positive side'

Kalama's Preston Armstrong (52) and Jackson Esary (4) signal in their direction after the Chinooks recovered a fumble against Onalaska on Oct. 16.

Kalama quarterback Jackson Esary (4) throws downfield for Max Cox while Gino Santi (54) moves out to block against Onalaska on Saturday, Oct. 16, in Kalama.

Kalama receiver Max Cox breaks away from Onalaska defenders as he turns up field on Oct. 16 in Kalama

Kalama's Gage Beck (53), Todd Tabor (34) and Gino Santi (54) meet in the middle to hit Onalaska quarterback Kayden Mozingo just after he released a pass on Oct. 16.

Kalama quarterback Jackson Esary fires a pass across his body on a two-point conversion against Onalaska on Oct. 16.