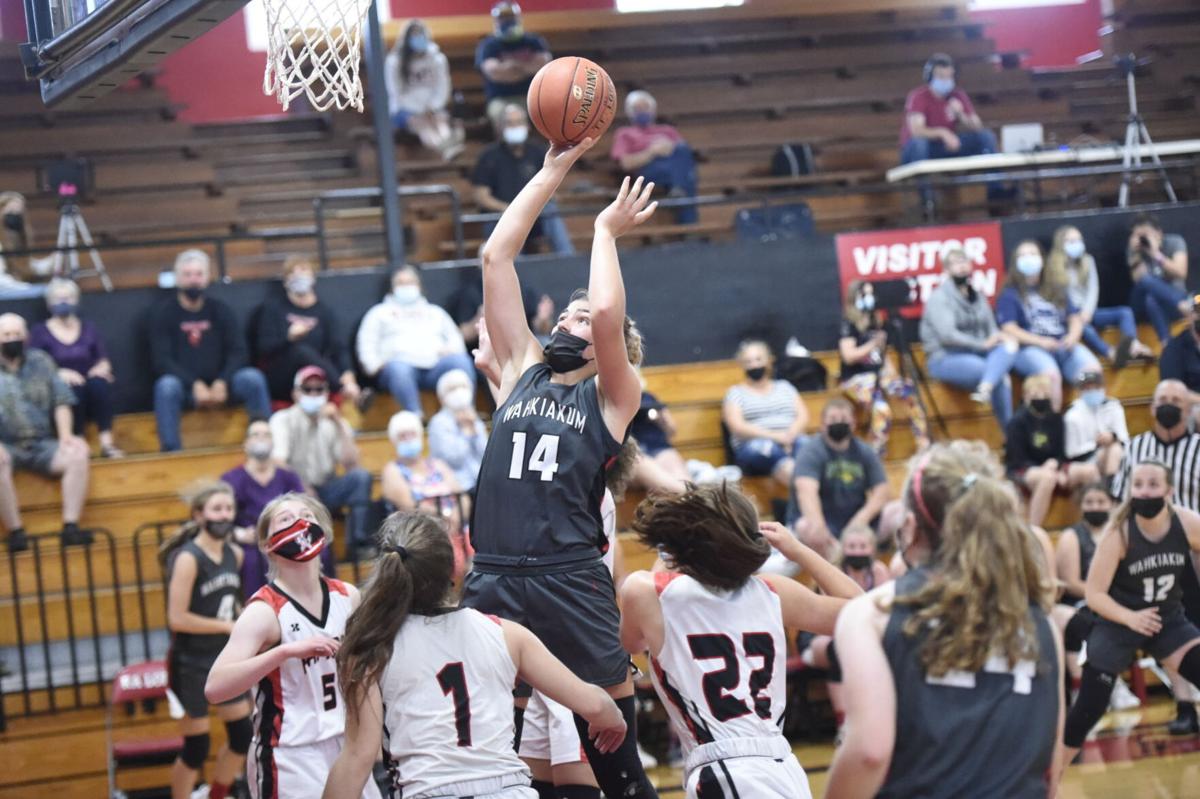 Wahkiakum's Jansi Merz (14) rises over a group of R.A. Long defenders to score from the low block on Friday, June 4, at R.A. Long High School. 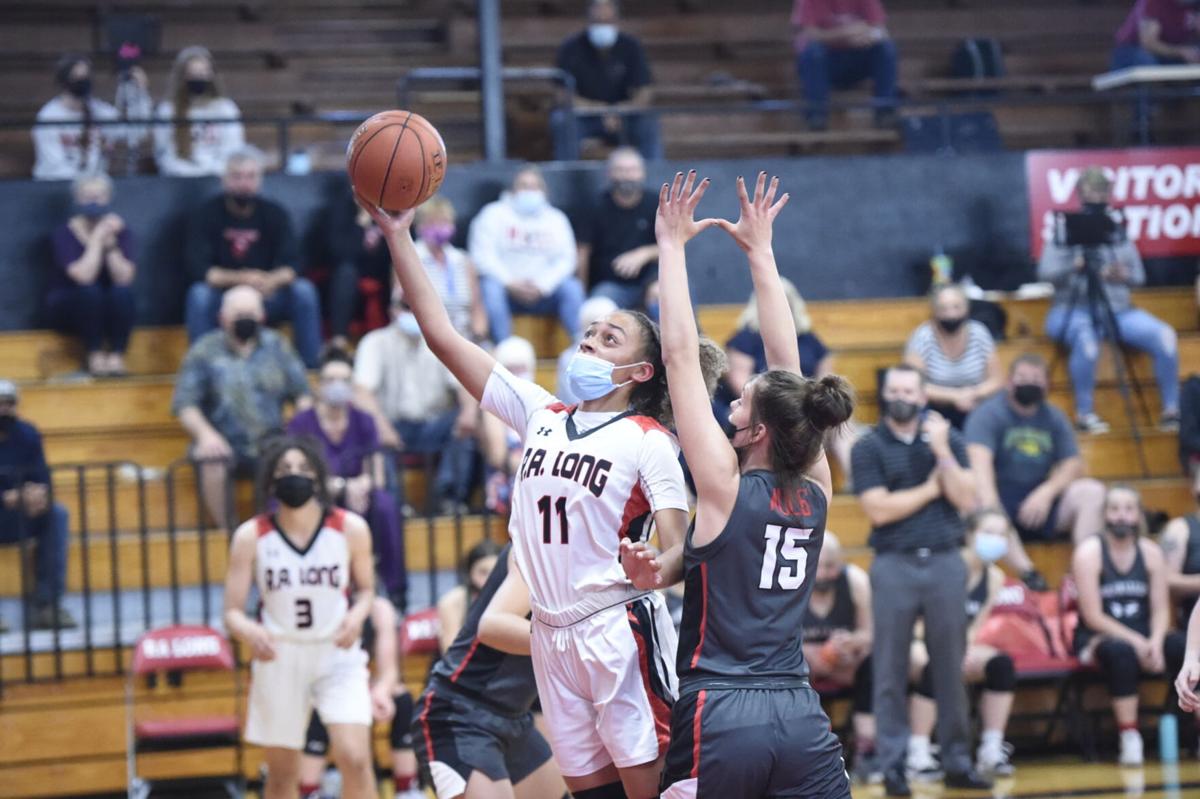 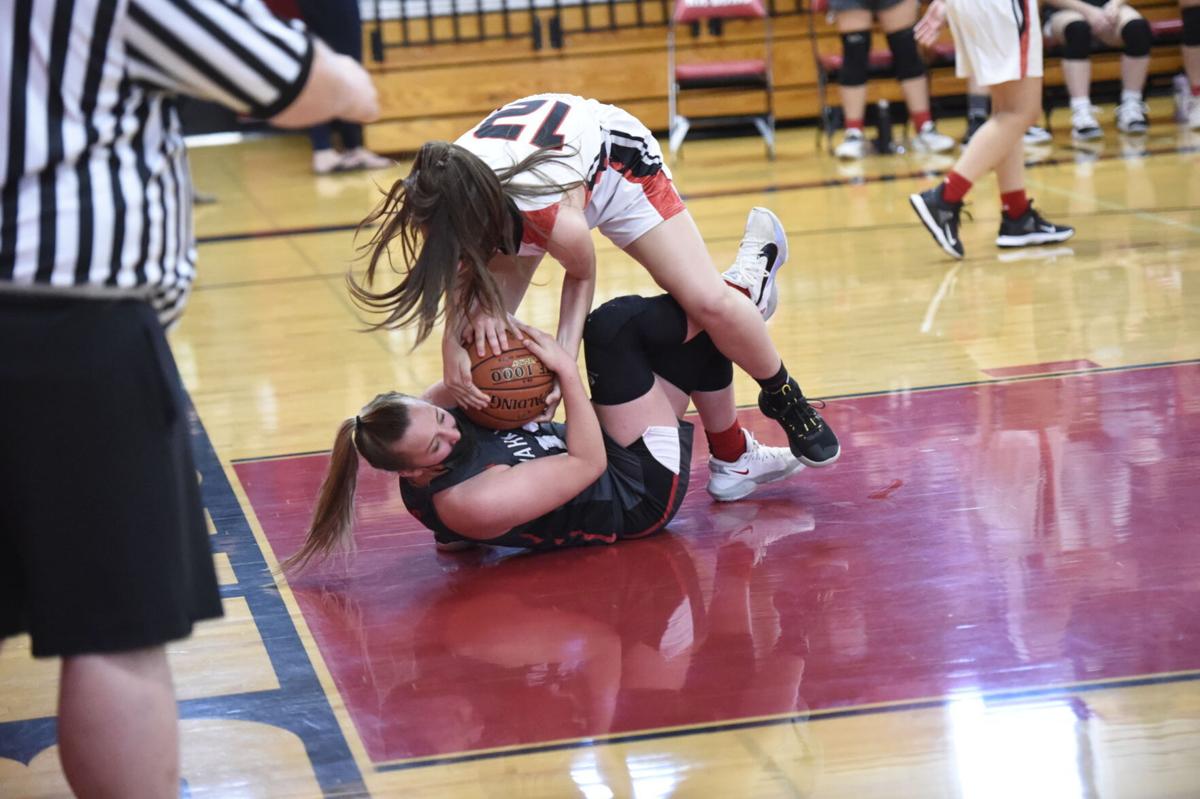 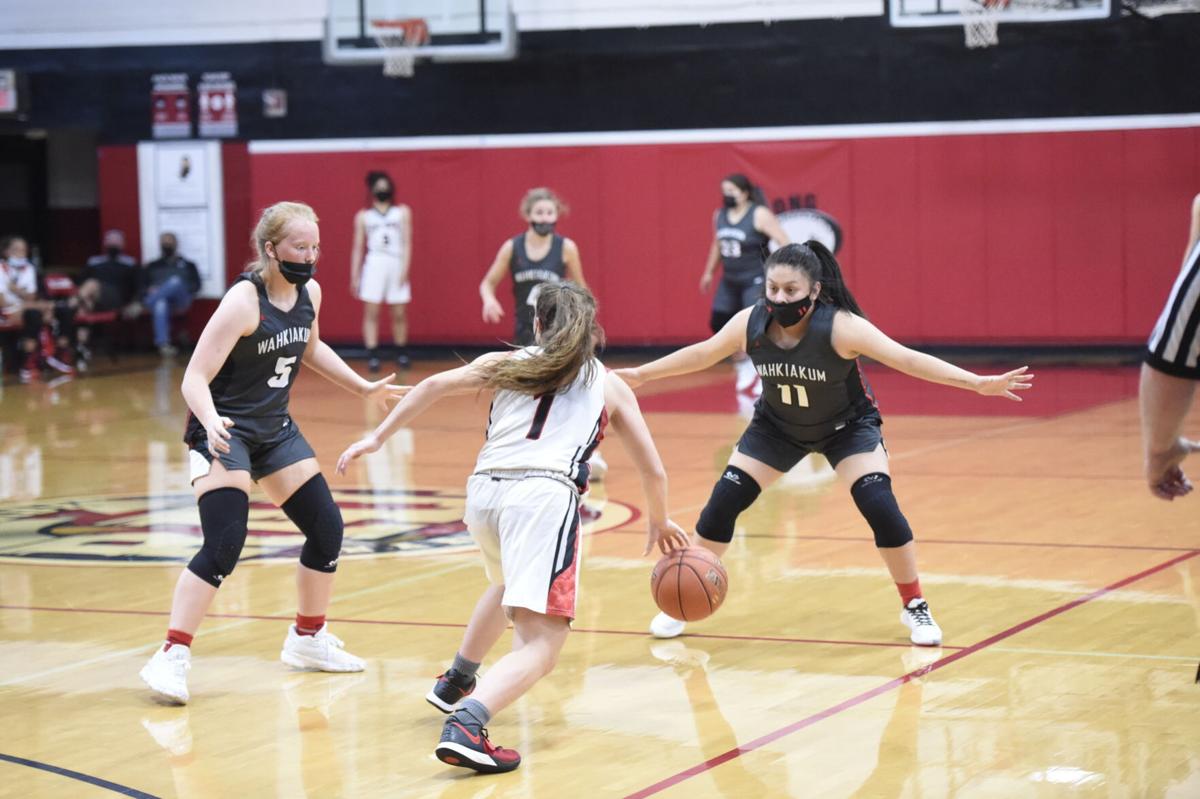 R.A. Long's Miranda Lomax (1) is double-teamed in the back court by Wahkiakum's Courtney Carlson (5) and Arrow Rose (11) on Friday, June 4, at R.A. Long High School. 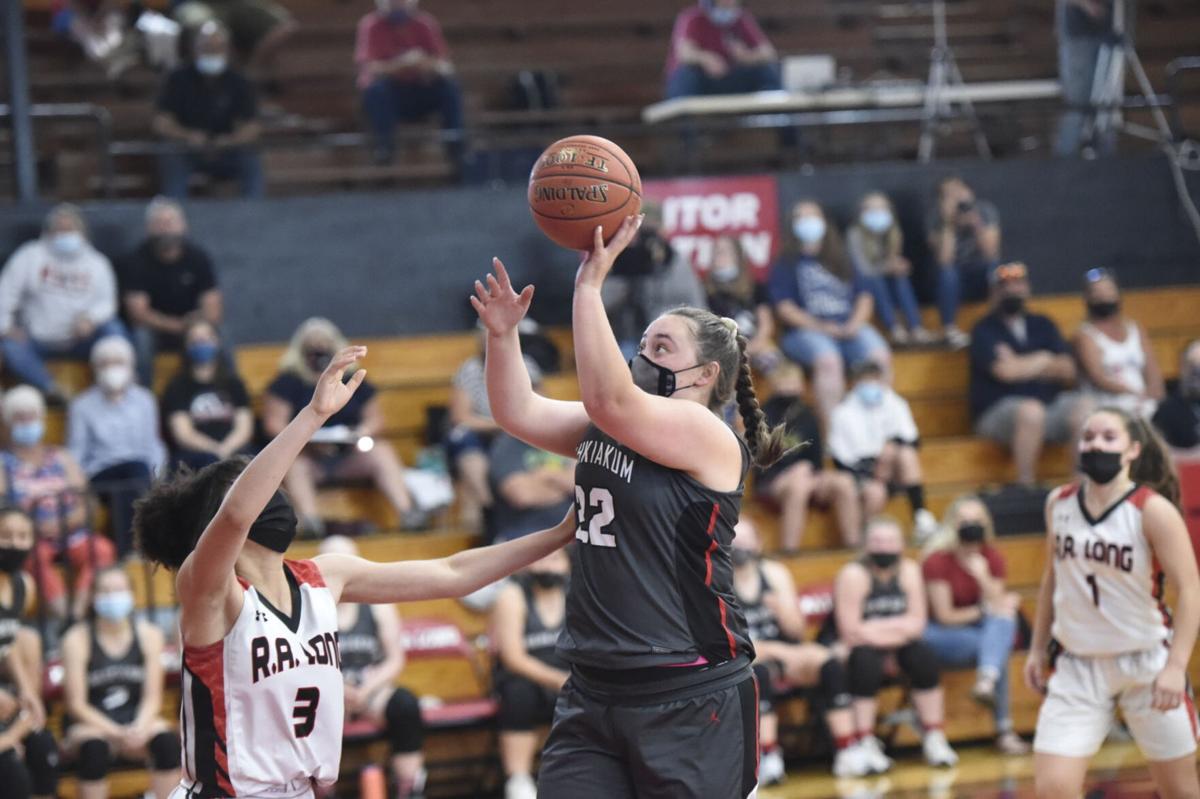 Once again, Wahkiakum has proven that it isn’t afraid to play, and win, outside its classification. On Friday, the 2B team entered hostile territory at 2A R.A. Long and played like it owned the place on the way to a dominant 78-48 victory.

“We love playing big schools. We want to take on everyone that will let us basically,” Wahkiakum coach Rob Garrett said.

Janzi Merz and Paige Mace led the way for the Mules with a combined 38 points. Merz controlled the paint on her way to a double-double with 21 points and 11 rebounds. Mace poured in 17 points and kept the ball moving with eight assists.

The Mules got things going early and jumped out to an 18-8 lead in the first quarter thanks to four first-quarter 3-pointers from four different players.

Despite the strong shooting, Garrett said he felt his team wasn’t playing as well as they could’ve.

“Shooting comes and goes, so we pride ourselves on defense and we know that we should be able to play great defense every single night,” he said. “That defense is all about effort and heart, and I didn’t think we had it in the first half and even for a stretch to start the second half.”

Merz helped the Mules add to the lead with eight second quarter points. RAL’s Miranda Lomax tried to get the Jills going with seven points, but Wahkiakum built a 35-21 lead at the half.

The Jills came out with more intensity in the third and hit three shots from long range on their way to scoring 17 for the quarter, but the Mules had an answer and held their 14-point, 52-38 lead entering the fourth.

Garrett said he liked the way the defense hounded the ball and forced turnovers.

“We finally picked things up about halfway through the third quarter and we were able to play on both ends and we were creating offense from our defense, which is what we like to do,” he explained.

If there was any doubt the Mules had the game wrapped up, the erased it with a 10-0 run to start the fourth and they capped the game with 26 points in the final period to bury the Lumberjills by 30.

As she’s done for most games this season, Lomax led the Jills in scoring with 14 points. The Mules kept a close eye on Lomax and often greeted her in the back court with two defenders to force her to give up the ball before passing half court.

Kendra and Kathryn Chapin each had one of their best games of the season as Kendra finished with 13 points and Kathryn added 10.

The Mules carried a big lead for the majority of the second half, but their intensity remained. Every member of the bench was on their feet to celebrate and cheer on their teammates after every big shot and hustle play.

“That’s something we expect game-in and game-out, it’s definitely part of our program, Garrett said. “It provides a lot of energy when things aren’t maybe going as well as they could be.”

Mace’s scoring ability from the perimeter and driving to the hoop, paired with her effort on the defensive end provided a constant spark for the Mules, something that didn’t go unnoticed by Garrett.

“I thought Paige had a phenomenal game across the board on both ends of the floor and she really created for us offensively,” he said.

The Lumberjills are still adjusting to life without Bobbi Clark and Jayla Clark in the post, as they remain sidelined with injuries.

“Against a team like this we learn and we just didn’t have enough people,” RAL coach Jan Karnoski said.

Karnoski noted that he was still pleased with his team’s effort and said that games against tough opponents are where you learn the most about your team. The Jills will have to come to terms with playing undermanned as they will also be without Miranda Lomax when the District Tournament kicks off on Monday.

“When three good players go down, we have to have someone step up,” Karnoski said.

This game marked the regular season finale for both teams as they now set their sights on the postseason.

Wahkiakum's Jansi Merz (14) rises over a group of R.A. Long defenders to score from the low block on Friday, June 4, at R.A. Long High School.

R.A. Long's Miranda Lomax (1) is double-teamed in the back court by Wahkiakum's Courtney Carlson (5) and Arrow Rose (11) on Friday, June 4, at R.A. Long High School.