Become a Member
Read Today's E-edition
Share This
2B Girls Basketball: Wahkiakum picks up speed against Winlock
0 Comments
Share this
1 of 3 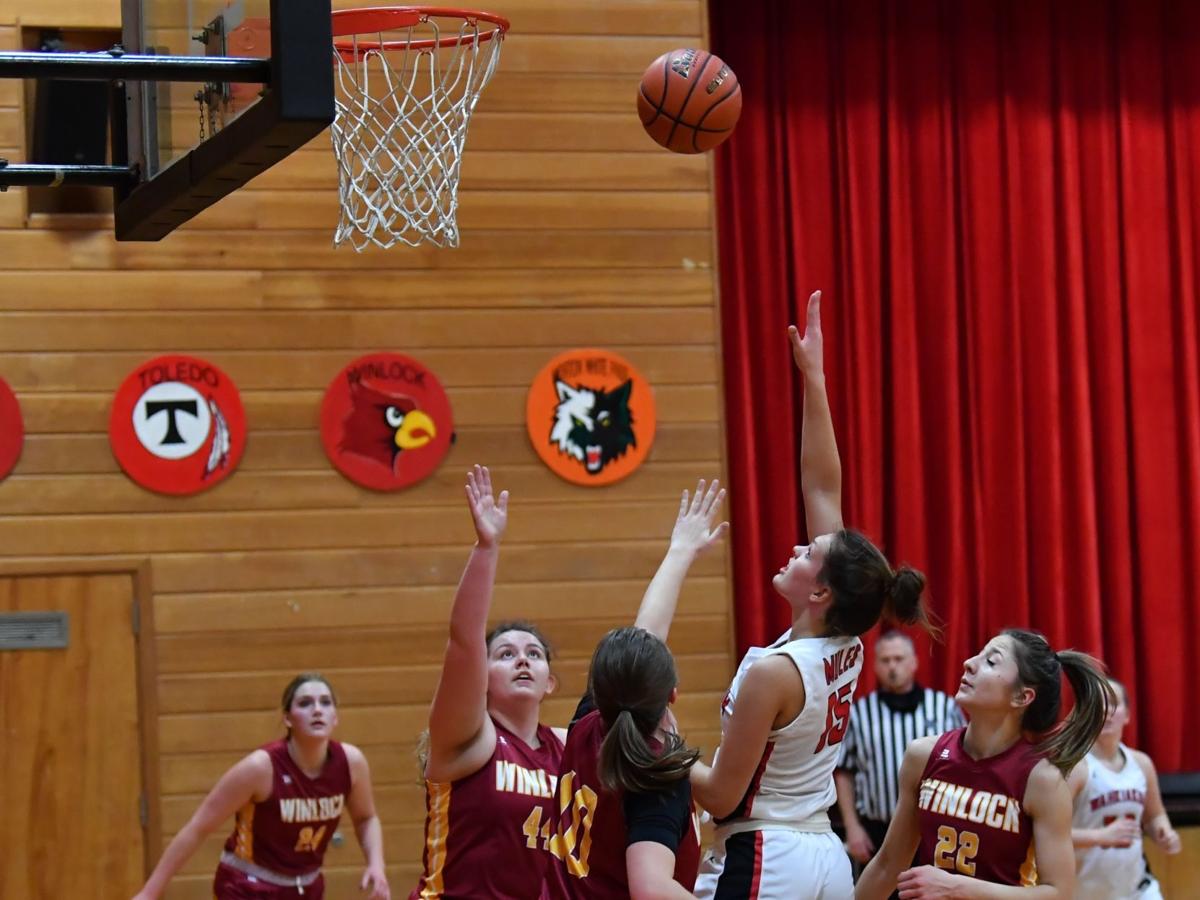 Wahkiakum's Emmie Niemela hooks up a shot in the first half of the Mules' 61-29 win over Winlock on Jan. 10. 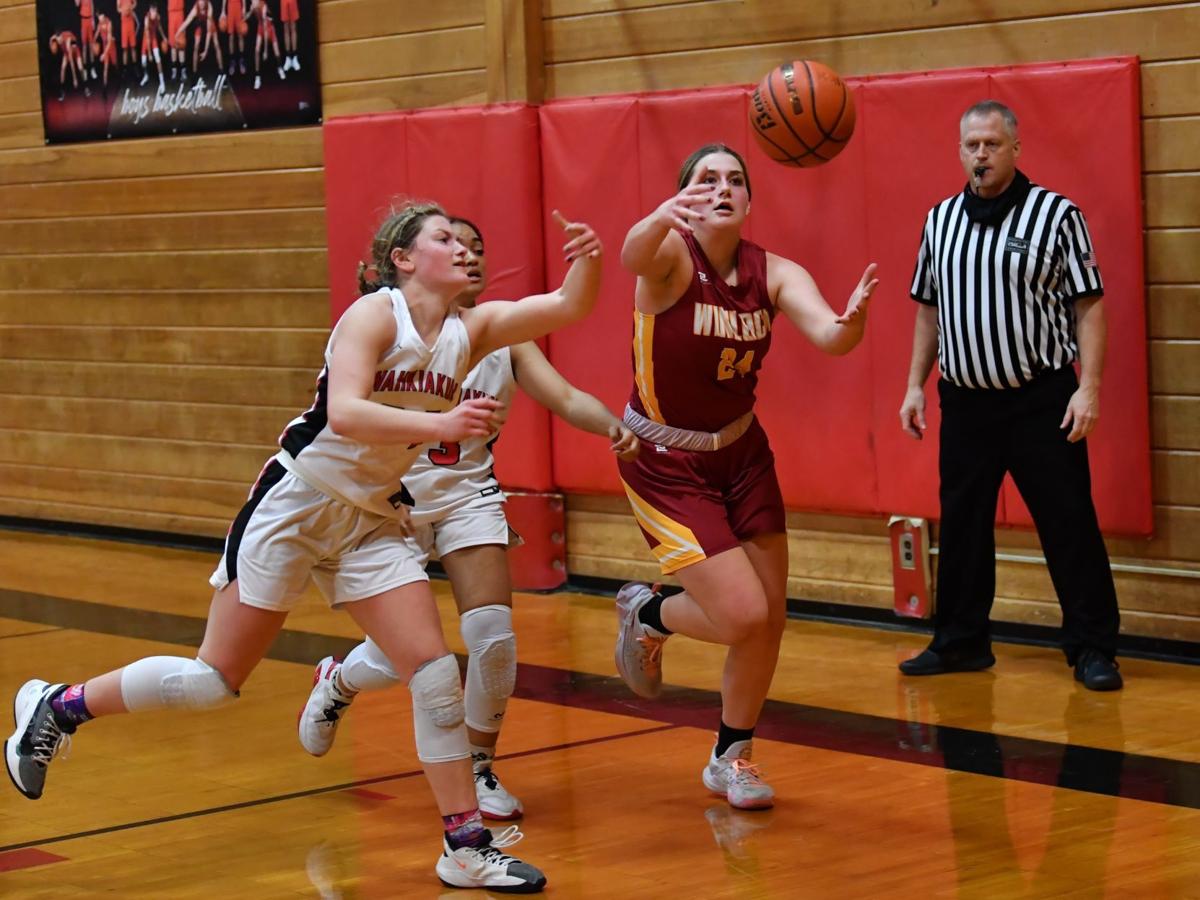 From left to right, Wahkiakum's Megan Leitz and Amirah Abdul-Kariem and Winlock's Addison Hall chase after a loose ball during the Mules' 61-29 win over the Cardinals on Jan. 10. 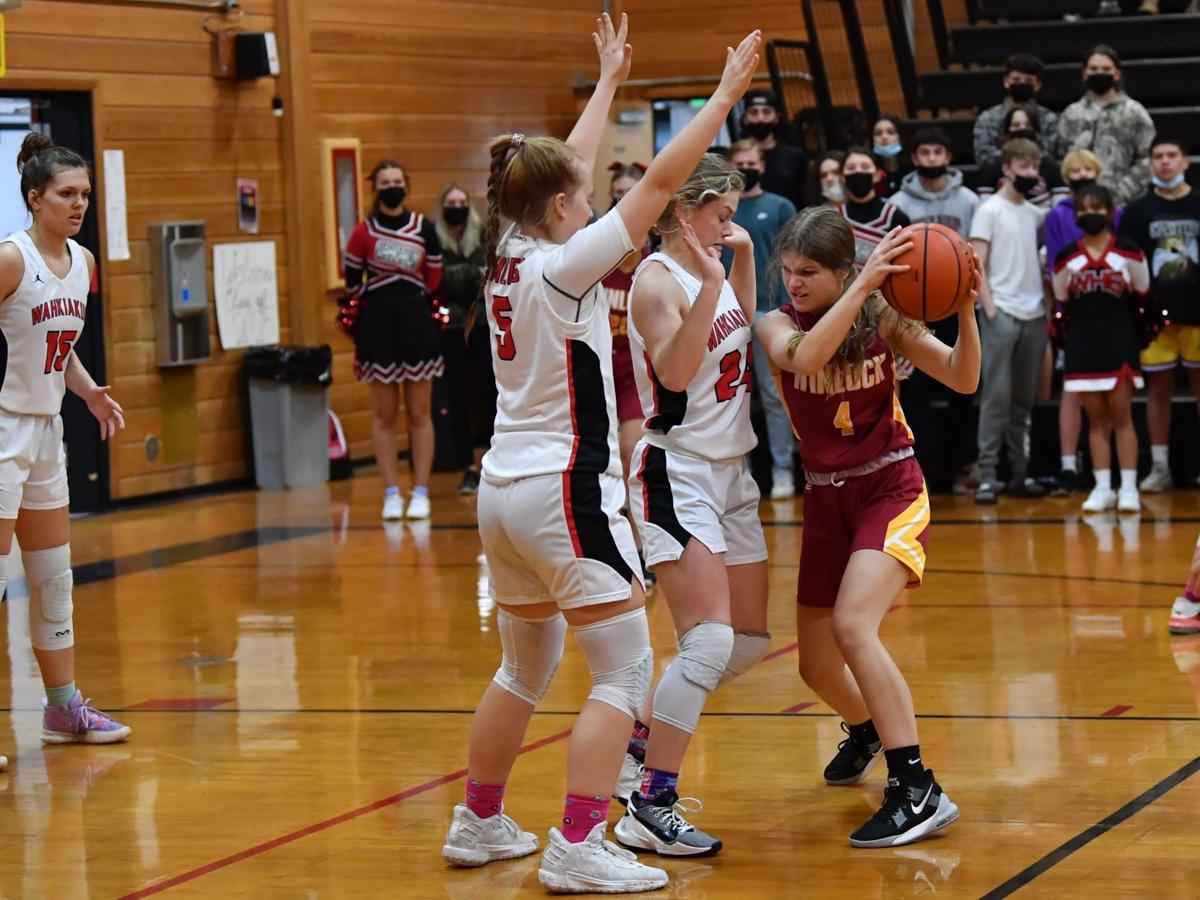 Wahkiakum's Courtney Carlson (5) and Megan Leitz (24) come together to stop Winlock's Kindyl Kelly early in the first quarter of the Mules' 61-29 win over the Cardinals on Jan. 10.

CATHLAMET — The Wahkiakum girls basketball team made their new year’s resolutions a week and a half ago, and so far, the Mules are keeping them. And after a 61-29 beating of Winlock — its largest margin of victory so far this season — Wahkiakum sure looks like a new and improved version of itself in 2022, which has to be a scary thought for the rest of the Central 2B League.

“I was thrilled with that game,” Wahkiakum coach Rob Garrett said.

The changes Monday — and in last Wednesday’s win over Onalaska — started with a stronger stable of legs and lungs. In the spring season’s District title run, the Mules subbed in and out like hockey shifts, with new bodies on the court every couple of minutes to make sure there were always fresh players on the floor. That team had a dozen Mules to rotate through, though. This season’s incarnation has just eight players in regular rotation, and to start the season they couldn’t keep up the electric pace needed to run their frantic trap-and-transition game.

After a winter break’s worth of wind sprints, they can.

“That’s a big shift,” Garrett said. “Early in the season, we had to force ourselves to walk it up the court because we were just too tired and we weren’t going to be able to play effectively if we didn’t. That’s no longer the case.”

Monday evening, Wahkiakum jumped out to a 19-4 lead after a quarter of play. Of those, 12 points came in transition off 11 Winlock turnovers. Even when the Cardinals put the ball in the basket, as often as not a quick pass over the top beat them down the floor for an easy layup on the other end.

The Cardinals finished with 29 turnovers on the night, and Wahkiakum scored 21 transition points, despite laying off its toughest presses after the opening minutes of the first period. Megan Leitz led the Mules with seven steals and four of the five Wahkiakum starters had at least two swipes.

“For us right now, I think it affected our confidence, their pressure, their press, and their defense,” first-year Winlock coach Dracy McCoy said. “We’re just not playing with as much confidence as I’d like us to be playing with right now. That’s a huge factor when someone pressures us like that.”

Even when Winlock did get the ball up the court, Wahkiakum made life difficult for its guests. Reigha Niemeyer drew the tall task of guarding Addison Hall, but she had help from her teammates every possession, forcing the Cardinals’ leading scorer to get the ball far away from the basket, give it up quickly, and not get it back.

Hall still scored more than half of her side’s points with a team-high 13, but she went 4-for-14 from the field along the way.

“Reigha did a great job on Addison,” Garrett said. “She seemed pretty flustered and frustrated. She’s a great kid, but unfortunately that’s our goal when you’re the best player on the other team, is to do that to you.

When Wahkiakum got the ball back — and didn’t immediately score on the break — the Mules showed off the their other area of focus lately. Typically a team that shoots more from beyond the arc than inside it, Wahkiakum diced up the Winlock defense with drive after drive, taking over 50% more two-pointers than threes.

Because of that approach, it didn’t matter that Wahkiakum went an ugly 4-for-24 on 3-pointers, with Niemeyer, Leitz, and Courtney Carlson all slashing to the hoop time and again.

Niemeyer had 10 points and Leitz added six. Carlson scored nine, and also led the Mules with seven assists, the majority of which went to Emmi Niemela, who scored a game-high 18 points.

“I was really proud of Courtney tonight,” Garrett said. “She gave herself that opportunity to get to the rim. She got them in foul trouble, and she attacked really hard.”

Niemela led Wahkiakum with nine rebounds, while Leitz and Miya Kerstetter each had eight.

Behind Hall, Kindyl Kelly had eight points for Winlock. Madison Vigre led the visitors with 11 rebounds, while Charlie Carper grabbed 10.

Winlock (5-5) was set to get a quick turnaround, hosting Morton-White Pass on Tuesday. Wahkiakum (9-3) will go to Toutle Lake on Thursday.

3A/4A Girls Basketball: Kelso beats Prairie for the first time in over 30 years

WINLOCK — It’s not often you see a flock of Cardinals and pack of Bulldogs and wind up with a goose egg at the end of the kerfuffle, but that’…

TOUTLE — The Toutle Lake girls basketball team worked together to turn in a strong defensive showing, downing Stevenson 45-25 in a Central 2B …

WINLOCK — Addison Hall found her mojo in a big way, leading Winlock to a 60-32 win over Morton-White Pass on Tuesday at home.

ILWACO — After a strong start on offense and some solid play inside by its post players, the Ilwaco girls basketball team cruised to a 59-27 P…

RAYMOND — After a grueling week that featured four games in five days, Winlock didn’t have the energy to cap it with a win, falling 55-44 to R…

VANCOUVER — Missing more than a handful of key players, the Mark Morris girls basketball team had a tough time hanging with Hudson’s Bay in a …

Wahkiakum's Emmie Niemela hooks up a shot in the first half of the Mules' 61-29 win over Winlock on Jan. 10.

From left to right, Wahkiakum's Megan Leitz and Amirah Abdul-Kariem and Winlock's Addison Hall chase after a loose ball during the Mules' 61-29 win over the Cardinals on Jan. 10.

Wahkiakum's Courtney Carlson (5) and Megan Leitz (24) come together to stop Winlock's Kindyl Kelly early in the first quarter of the Mules' 61-29 win over the Cardinals on Jan. 10.