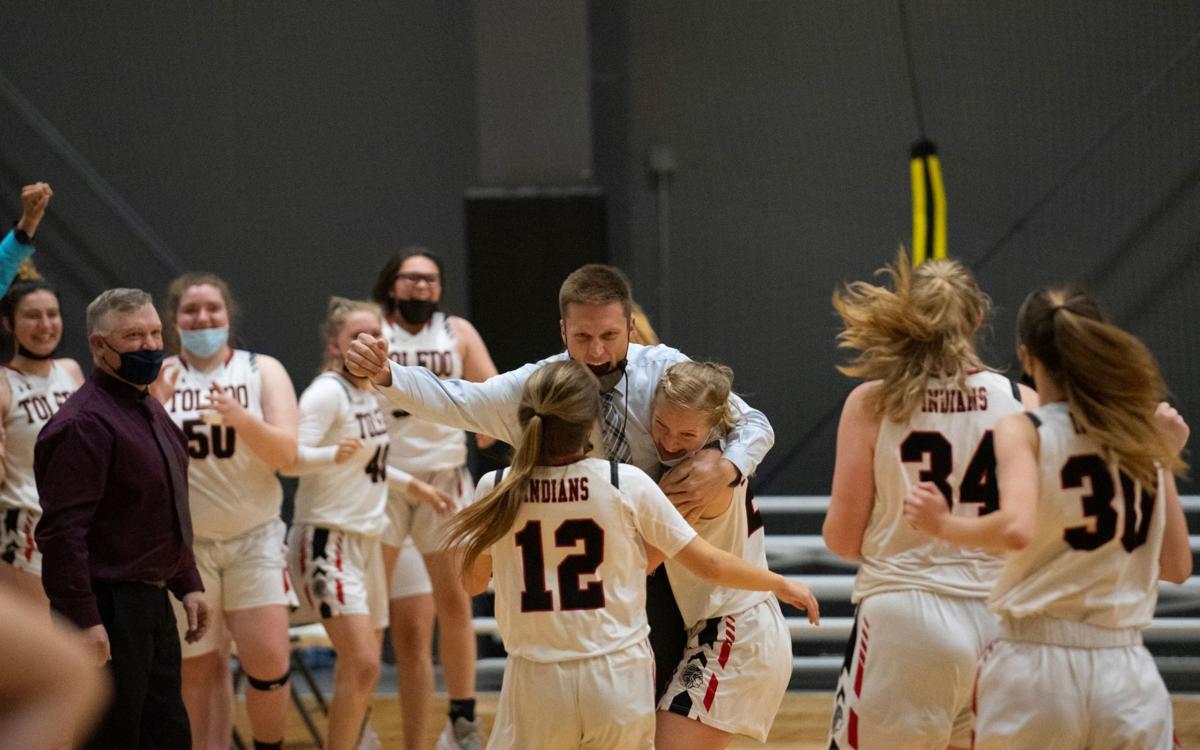 Toledo coach Brian Layton is swarmed by players in the moments immediately following their 35-33 win over Adna in the 2B District IV girls basketball semifinals, Wednesday, June 9, at the NW Sports Hub in Centralia. 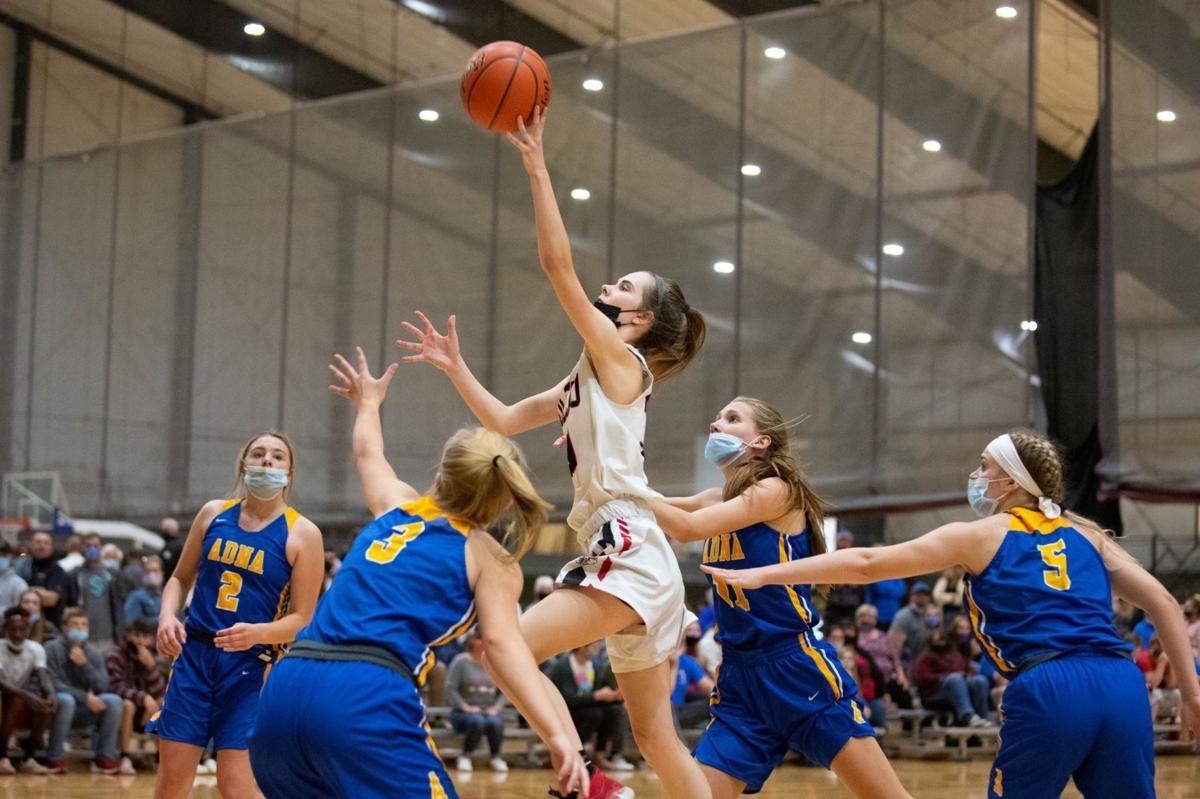 Toledo's Marina Smith lofts a shot over the Adna defense during a 35-33 win in the 2B District IV girls basketball semifinal at the NW Sports Hub in Centralia on Wednesday, June 9.

CENTRALIA — It took Toledo three quarters to get going Wednesday at the NW Sports Hub but that might have worked to their advantage. After all, the nice thing about taking a late lead is that you don’t have to hold on to it for too long, and Toledo had just enough time to slip away with a 35-33 win over Adna to punch their ticket to the 2B District IV girls basketball championship tilt.

Trailing by as many as nine points in the second quarter Toledo spent the entire game looking up at Adna on the scoreboard until Gracie Madill knocked down a pair of free throws to open the third quarter. Still, every time Toledo tied the game up Adna would answer right back with a bucket of their own to reclaim the lead.

It wasn’t until the clock read 2:13 in the fourth quarter that Marina Smith connected on a 3-pointer to give Toledo their first and only lead of the game at 35-32.

“I was kind of having an off night so I was a little nervous but then I just figured we’d been down the whole time and we needed something so I just had confidence that I was going to make it, and I made it,” Smith said. “You can only miss so many times.”

Early on the Adna defense was giving Toledo fits with a full court press and a 2-3 zone in front of the basket. That combination left Toledo’s offense out of sorts as they struggled to find open looks anywhere inside the arc. Meanwhile, Adna was running their offense through Summer White who finished the first half with a dozen points to help springboard the Pirates’ lead.

“Early on they couldn’t miss and we were a little slow out of the get-go,” Smith said.

Things started to turn around for Toledo in the second quarter when they held Adna to just three points. All told, the Pirates were only able to eclipse the ten point mark in the first quarter.

“We were trying to focus on number five (Kaylin Todd). I was guarding her at first but then I got into foul trouble so Gracie Madill stepped up, and Vanessa (Rodriguez), too,” Smith noted.

Once Emma Cline-Maier and Madill finished trading assists to one another from the perimeter to the block and vice versa, Toledo had cut their deficit 18-16 just in time to head to intermission.

That territory was all too familiar for Toledo as they came into the game just one week removed from a three point loss to the Pirates.

“We knew it was going to be a grind it out game with Adna. It always is with Adna, they’re well coached,” Toledo coach Brian Layton said. “But we just said play defense. We tried to change it up a little bit, and give yourselves a chance at the end, and they did it.”

Stacie Spahr locked down the block for Toledo and led the offense with an 11-point, 13-rebound double-double. She also got her hands on three steals to help stymie the Pirates. Cline-Maier added eight points while Smith dropped in seven points with three assists and three steals to help grease the wheels of victory.

“I’m so proud of them because they are so resilient,” Layton said. “The growth of this team is just so awesome. We went ten deep and everyone came in and gave good minutes.”

Summer White led Adna with 11 points, all of which came in the first half. Karlee VonMoos added seven points and Ellie Sliva added chipped in six points in the loss.

“No matter who we play we’ve got to play defense and grind it out,” Layton said. “We believe that our defense can keep us in any game whether we are shooting well or not.”

After knocking down the game-winning shot and sending her team to the District title game, Smith was looking forward to facing any of Toledo’s doubters that may have been mingling in the crowd. But she knows the words of spectators are of little matter at this late junction.

“We definitely started off pretty slow with two losses. We just had a lot to prove to everyone that we could make it this far,” Smith said.

In the nightcap semifinal Wahkiakum ran Ilwaco off the court. That outcome set Toledo up with a rematch against the Mules, a team that beat them by 25 points earlier in the season and coasted through their semifinal affair.

Not that Toledo is too worried. Teams that trust in their defense tend to sleep well at night.

“No matter who we play we’ve got to play defense and grind it out… we believe our defense can keep us in any game whether we are shooting well or not,” Layton said. “It will be fun. I think this is the first time we’ve been in a championship in a long, long time....It’s just going to be a season to remember.”

Toledo coach Brian Layton is swarmed by players in the moments immediately following their 35-33 win over Adna in the 2B District IV girls basketball semifinals, Wednesday, June 9, at the NW Sports Hub in Centralia.

Toledo's Marina Smith lofts a shot over the Adna defense during a 35-33 win in the 2B District IV girls basketball semifinal at the NW Sports Hub in Centralia on Wednesday, June 9.