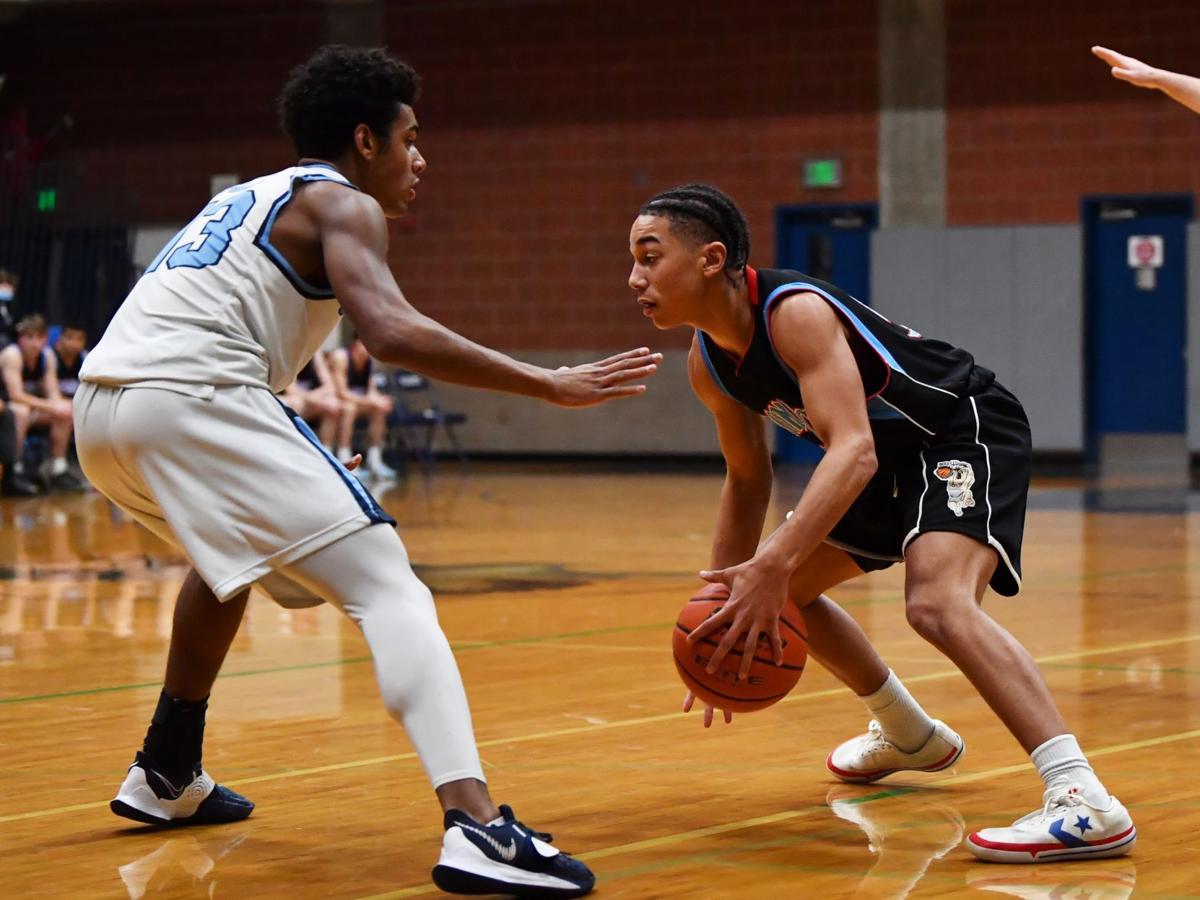 Mark Morris junior Kobe Parlin puts a move on a defender to get to the basket in the Monarchs' win over Hockinson on Jan. 7. Parlin is averaging 17.7 points per game for the Monarchs, shifting all around the court from point to post. 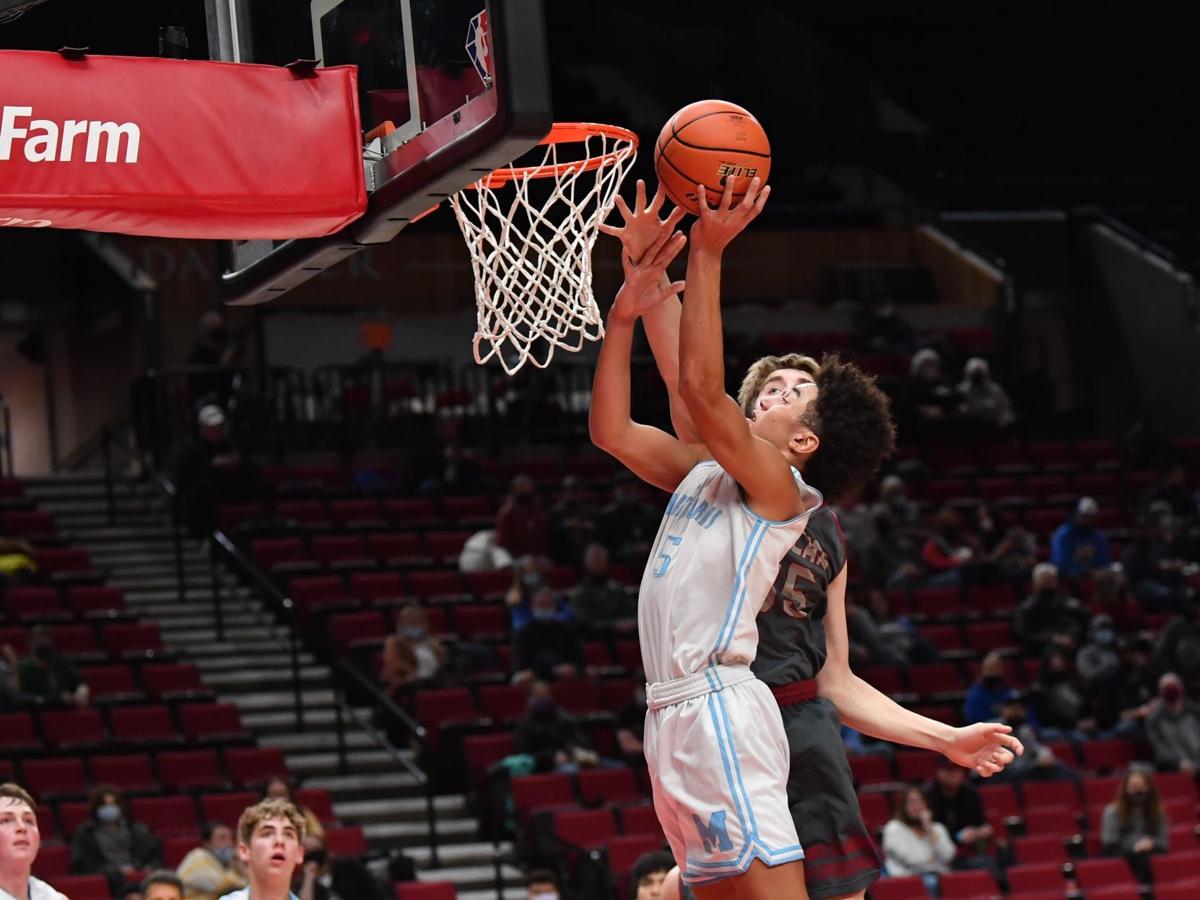 Mark Morris guard Kobe Parlin takes the ball to the rack in the face of a W.F. West defender during a non-league boys basketball game at the Moda Center in Portland, Saturday, Dec. 11. Parlin scored a game-high 17 points in a 57-45 win for the Monarchs.

Last Friday at Hockinson, Kobe Parlin went with the Converses.

The 6-1 junior boasts a veritable arsenal of footwear, but when the Mark Morris boys basketball team returned to the court after the new year, Parlin traded in the modern glitz and glamor for a an oldie but goodie: low-top Converse All-Stars, straight out of the 1970s, broken in to the point they looked to be falling apart.

“The Converses are probably one of my favorite shoes,” he said. “Super light, super good… It’s a throwback, and I like them a lot.”

Then, he went onto Hockinson’s old-school court and, wearing shoes that look straight out of Larry Bird’s closet, proceeded to drop 25 points on the Hawks in a timeless dominating performance.

Parlin’s got newer options, too — Puma Uproar Palace Guards, PG 1’s, Hyperdunks, and plenty, plenty more. They change from game to game, sometimes from half to half, depending on the mood or what’s been working in practice.

Over the past two seasons, Parlin came into his own as one of Mark Morris’ top guards. When the Monarchs made their run to the 2A District IV title in the spring, he sparked run after run from beyond the arc, hitting double figures twice in the postseason as the entire MM roster went on one of the hottest shooting runs in recent memory.

But as soon as the nets were cut down and the Monarchs finished off their celebrations, reality began to set in: with all-area big man Ashton Harvey graduating and taking a double-double per game with him, they’d have just about no height in the post going forward.

This season, just over half of MM’s roster comes in over 6 feet tall, and the Monarchs’ tallest players top out at 6-3. Mark Morris has gone into every game this season as the smaller side — and will do so the rest of the year — having to overcome that fact on a daily basis.

A major part of the solution coach Bill Bakamus and his staff have come up with? Parlin, doing just about everything imaginable.

“He’s embraced the fact that he needs to be versatile,” Bakamus said.

That Hockinson game, like every game this season, saw Parlin play just about every position on the court. He went from taking the ball up the floor as a point guard, to catching the ball on the wing, to running the baseline in the post.

He’s been able to hit his shots from beyond the arc, but paradoxically enough, the smaller MM lineup has led to more success inside. So far this season the junior is averaging 17.7 points per contest, hitting 15 in each of the past seven games and exploding for 30 in the Monarchs’ Dec. 29 win against Seattle Academy.

On defense, he took his turn leading MM’s full-court press and harrying ball-handlers the whole way down, while also moving to the bottom of the Monarchs’ zone to defend the Hawks’ post players.

“I kind of like it,” Parlin said. “I’ve always defended bigger guys, and learned how to defend bigger guys. It doesn’t really bother me who I’m guarding.”

In a league where nearly every opponent will boast at least one giant in the post, Parlin has become the keystone of a Mark Morris lineup that’s gone small by necessity. He’s switched back and forth between positions like he’s swapping out shoes, giving the Monarchs both flashy highlights and a sturdy presence all over the court.

“He’s been primarily a guard all his life, and now he’s getting to do a lot of other things, and a lot of little things, and some of the dirty work that he’s finding some joy in. Whether it’s putbacks or rebounds or making a good pass,” Bakamus said. “His game has rounded into a plethora of opportunities for him, and he’s taking advantage of them. It’s really nice to see.”

KALAMA — The 1,000-point mark is the benchmark milestone that most high school basketball players never come close to. It shows consistency, l…

2B Boys Basketball: Kalama grinds out win over Toledo

TOLEDO — It wasn’t the prettiest and it wasn’t the easiest. But the Kalama boys basketball team did just enough to bounce out to an early lead…

KELSO — Size gave it it’s best shot, but speed and quickness won the night as the Kelso boys basketball team fended off a challenge from 2A W.…

A matchup between top tier 2B teams lived up to its billing, if only for the first half, at LCC’s Martin Luther King Jr. Basketball Tribute on…

After three quarters of play Tuesday night the Monarchs were ready to unlace their ankle braces and let the dogs bark. The only problem was th…

Tumwater was the team coming an hour south to Cowlitz County, but once in Longview, Mark Morris was the one playing the Thunderbirds’ game, lo…

Mark Morris junior Kobe Parlin puts a move on a defender to get to the basket in the Monarchs' win over Hockinson on Jan. 7. Parlin is averaging 17.7 points per game for the Monarchs, shifting all around the court from point to post.

Mark Morris guard Kobe Parlin takes the ball to the rack in the face of a W.F. West defender during a non-league boys basketball game at the Moda Center in Portland, Saturday, Dec. 11. Parlin scored a game-high 17 points in a 57-45 win for the Monarchs.