TOLEDO — Trailing by nine points entering the fourth quarter the Riverhawks were able to do just enough to claim a 52-52 victory over Adna, Friday, in a Central 2B League boys basketball battle.

Toledo, sitting in seventh place in the C2BL, proved that they belong in the district tournament conversation after taking out the Pirates who are ranked No. 7 in the state in the latest Associated Press polls.

The Riverhawks established a 9-2 lead right out of the chute but wound up trailing by 16 points in the second quarter. Still looking up at the Pirates 33-28 at the intermission, Toledo was simply saving its best efforts for last.

“Kaven Winters had 26 tonight and was just solid in every quarter,” Fallon said.

Winters posted nine of those points in the fourth quarter alone, and grabbed a team-high six rebounds in the game, as the Riverhawks held the Pirates to just three points down the stretch.

A large part of that effort was spent trying to contain Braeden Salme. Adna’s most prolific scorer put up 22 poins in the game but scored only two points in the fourth as the Riverhawks put the finishing touches on their comeback.

“Salme, he’s pretty good obviously, he had eight in the first quarter and got them back into it,” Fallon noted. “We didn’t press, we just tried to clamp down. We tried to keep the ball out of Salme’s hands as much as possible. That was Conner Olmstead’s job.”

In addition to his defensive prowess, Olmstead added 10 points and five rebounds for the Riverhawks.

Leading by one in crunch time Toledo fouled the Pirates with five seconds left on the clock to force the visitors to take the ball out of bounds. After denying Salme the ball it was Eli Smith who drove into the lane, jump stopped, and then kicked the ball out to Seth Meister in the corner. Meister’s shot ripped the net but was waved off by the referee’s because it did not leave his hand in time.

“The fact that it goes in just makes it worse for Adna and our kids, of course, were super excited,” Fallon said. “We’ve been so close against so many good team and just couldn’t hang on.”

The Riverhawks cashed 10 of 12 free throw attempts in the game to help grease the comeback while the Pirates made just six of 11 freebies.

With the postseason looming large on the horizon, Toledo will look to capture their magic in a bottle before district tournament time. The Riverhawks are currently holding onto the final playoff spot out of the C2BL, trailing Rainier (WA) by one game in the standings.

“They’re all yelling and screaming in the locker room and celebrating and usually when the coach walks in they all quiet down, but this time I just put my hand in the air and said, ‘Finally!’ and they all went wild,” Fallon said of his team’s postgame celebration. “With this win it at least makes us legitimate not-pusher-overs. Before this we hadn’t beaten anybody.”

Toledo (9-8, 4-6) will host Winlock next Friday at 7:15 p.m. for senior night. The Riverhawks will turn around and play a non-league contest at Castle Rock next Saturday.

MORTON — Toutle Lake threw everything it had at No. 3 ranked Morton-White Pass on Friday but came up on the wrong end of a 68-60 decision in East Lewis County.

The Fighting Ducks, who have been battling their way back to relevancy after a slow start to the season, held a 32-28 lead at the intermission and had everyone east of Ethel sitting on the edge of their seat.

Zach Swanson led the Ducks with a game-high 24 points and Connor Cox added 22 for the Ducks.

“It was good, we just came up a little short. We’ve got to clean a few things up on both ends of the floor,” Toutle Lake coach Eric Swanson said. “It was highly contested, every possession, like a playoff game for sure.”

As emotions piqued and tempers flared, the Timberwolves looked right at home, putting up 22 points in the third quarter to reclaim a 50-47 advantage.

Morton-White Pass added five points to their advantage over the final eight minutes and left their fieldhouse happy, but the Ducks did enough to grab the attention of anyone who hadn’t yet realized they are a real threat.

“We’ve definitely turned a corner, but we can still get better,” coach Swanson noted. “Our effort has come a long ways on both ends of the floor. We just made a couple errors that wound up costing us. They’re really good and against a good team you can’t afford to have those kinds of lapses.”

Josh Salguero led the T-Wolves with 17 points from his station in the post and Judah Kelly added 16 points for the hosts.

“They have the luxury of having a six-seven guy inside that can cover some of that stuff up and we don’t,” coach Swanson noted. “We’ve got to be tough and we’re getting tougher.”

Zach Swanson’s 24 points pushed him to the top of Toutle Lake’s list of career points scored. Now sitting at 1,832 points, the junior passed Kevin Grabenhorst (1,817) for the top spot in program history. The reshuffling of the deck leaves Nick Andrew in third place all-time with Casey Frandsen in fourth.

None of that mattered much to the boys in blue, though, after what would have been a defining victory slipped through their fingers like so much Toutle River silt.

“That’s a neat thing and all but I’m sure Zach would trade a few of those points for a win,” coach Swanson said of his son. “He’s like me. He wants to win.”

Toutle Lake (10-7, 6-4) will welcome the No. 9 ranked Wahkiakum Mules to town on Wednesday a 7 p.m. for another test between State hopefuls.

CATHLAMET — Riding high from its big road win at Adna on Wednesday, Wahkiakum took care of business in a 57-33 win over Onalaska to keep the momentum rolling, Friday.

Zakk Carlson finished with 23 points on 10-for-16 field-goal shooting to lead the Mules’ offense. Wahkiakum opened up a 26-11 lead after one half of play en route to its third consecutive win and fifth in six games.

“I challenged them on the defensive end. It is tough to play at the same level every night,” Wahkiakum coach Todd Souvenir said. “Offensively, we definitely were a little sloppy. We did not get good looks from the perimeter. Zakk stepped up and carried the offense from inside the arc. He had a good night.”

Senior guard Brodie Avalon chipped in six points and dished out five assists with his dribble penetration against the Loggers’ defense. Kyler Sause dropped in 10 points and Dominic Curl had nine as the Mules pulled away in the third quarter.

Wahkiakum (13-3, 8-2 league) picked up its eighth win in Central 2B League play where it continues to hunt Morton-White Pass and Napavine for a spot at the top of the heap.

The Mules head out to Toutle on Wednesday for a crucial rematch against Toutle Lake which could separate the two teams in the standings. Wahkiakum won the first matchup at home by a score of 72-57.

Cards come tumbling down against Mounties

RAINIER — Winlock was unable to pick up its second league win in as many games, Friday, instead falling to Rainier (WA) 77-31 in the C2BL contest. The loss was Winlock’s fifth over its last six games.

“Unfortunately for us, we picked the wrong time to have our worst game of the year,” Winlock coach Cole Doughty said. “We couldn’t take care of the ball, make shots or rebound. Just one of those nights.”

The Cardinals fell behind 21-11 after the opening quarter, then Rainier dropped 25 on them in the second quarter to take a 46-17 lead into the break.

“Rainier put the pressure on us early defensively and then converted almost every time on the offensive end,” Doughty added. “Give credit to them, they dominated every part of the game.”

Winlock (5-9, 1-9 league) will look to rebound when it hosts Rochester on Monday at 7 p.m. in a non-league matchup.

FORKS — Ilwaco made the four-hour trip north worth the time by picking up a 58-41 Pacific 2B League win over Forks, Friday night.

Ilwaco held a 23-11 lead after the opening quarter. The Fishermen were able to take a 32-23 advantage intohalftime despite a few more turnovers on offense.

“We didn’t shoot the ball like we have in past games in large part to how Forks was flying around in their defensive zones,” Ilwaco coach Eric McMillan said. “Even though we started out scoring 23 points in the first quarter, it was our defense that fueled the early offense as we got out on the break before Forks could get set.”

Aidan Salazar finished with 15 points to lead Forks in the loss.

Kalama lost 89-45 in a league game at No. 8 Napavine on Friday. A game report was not provided to The Daily News. The Chinooks were set to play a non-league contest at Riverside Christian on Saturday.

WOODLAND — Good teams talk on defense, but on the offensive side of the ball the teams with the most chemistry tend to go off like a choreogra… 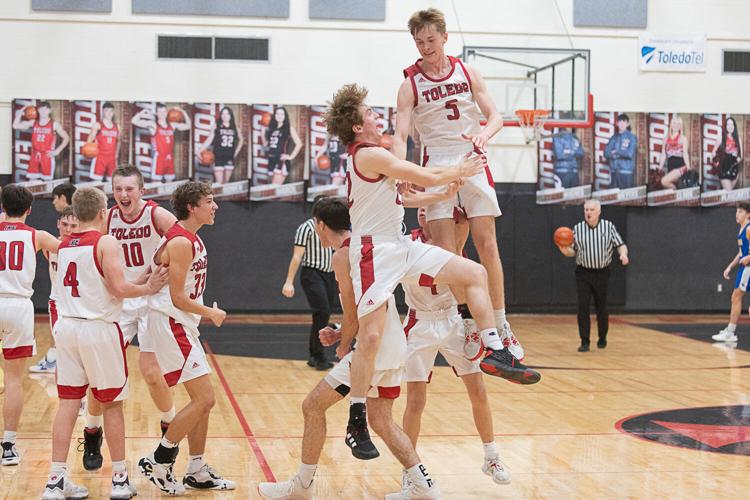 The Toledo boys basketball team celebrates at the final buzzer of its 52-51 win over Adna at home Friday, Jan. 20. The Riverhawks trailed by as many as 11 points in the fourth quarter before coming back to upset the No. 7 ranked Pirates. 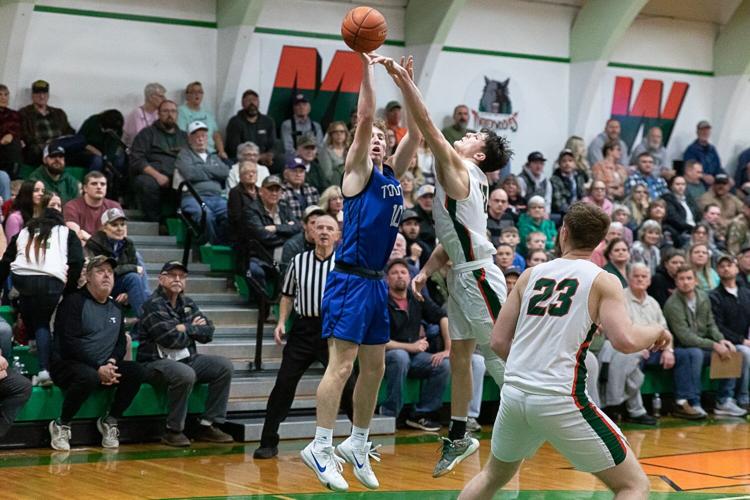