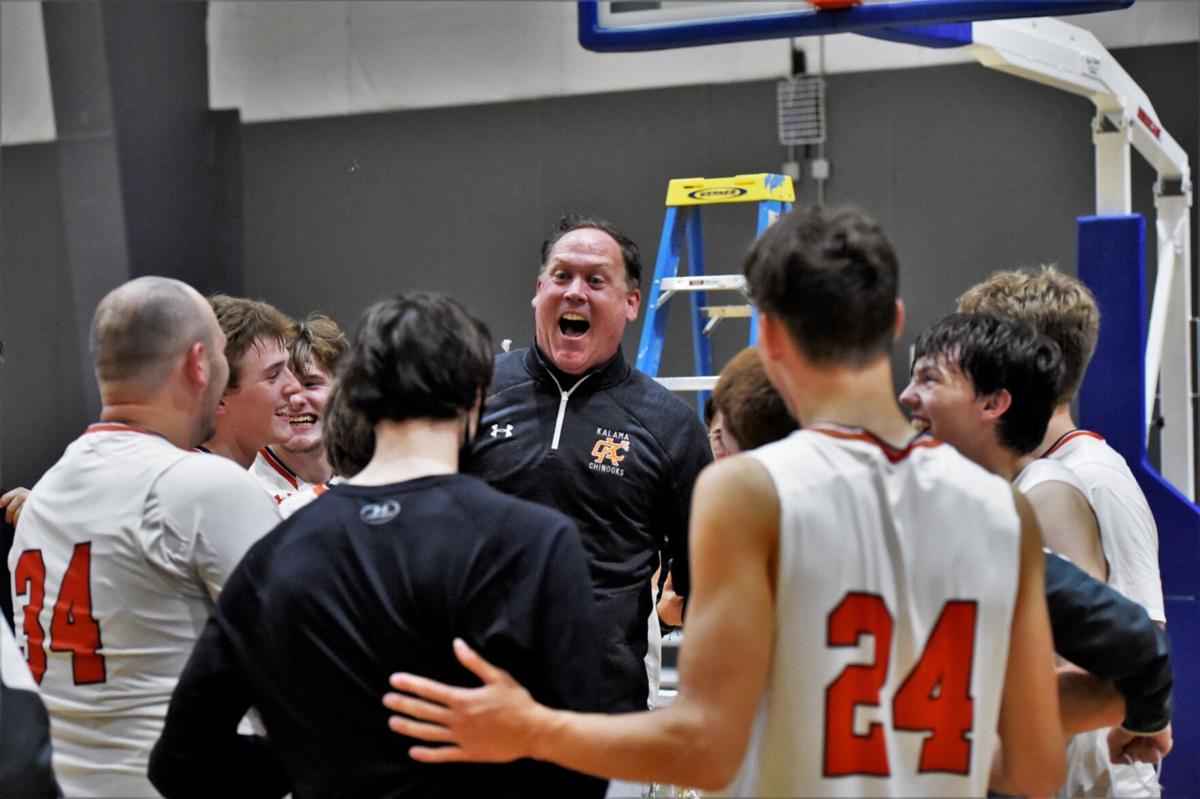 Kalama boys basketball coach Wes Armstrong celebrates with his team after cutting down the net at the NW Sports Hub, Thursday, June 10, following the Chinooks' 57-47 win over Napavine in the 2B District IV championship game. 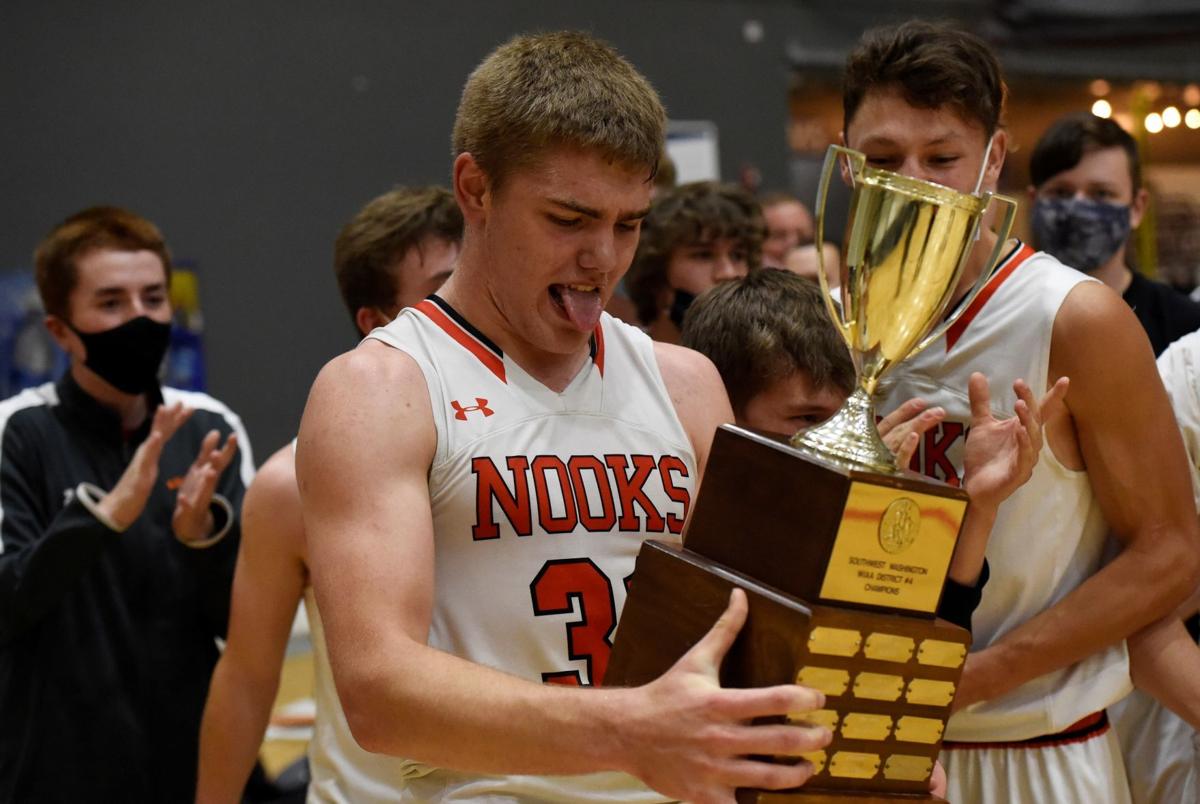 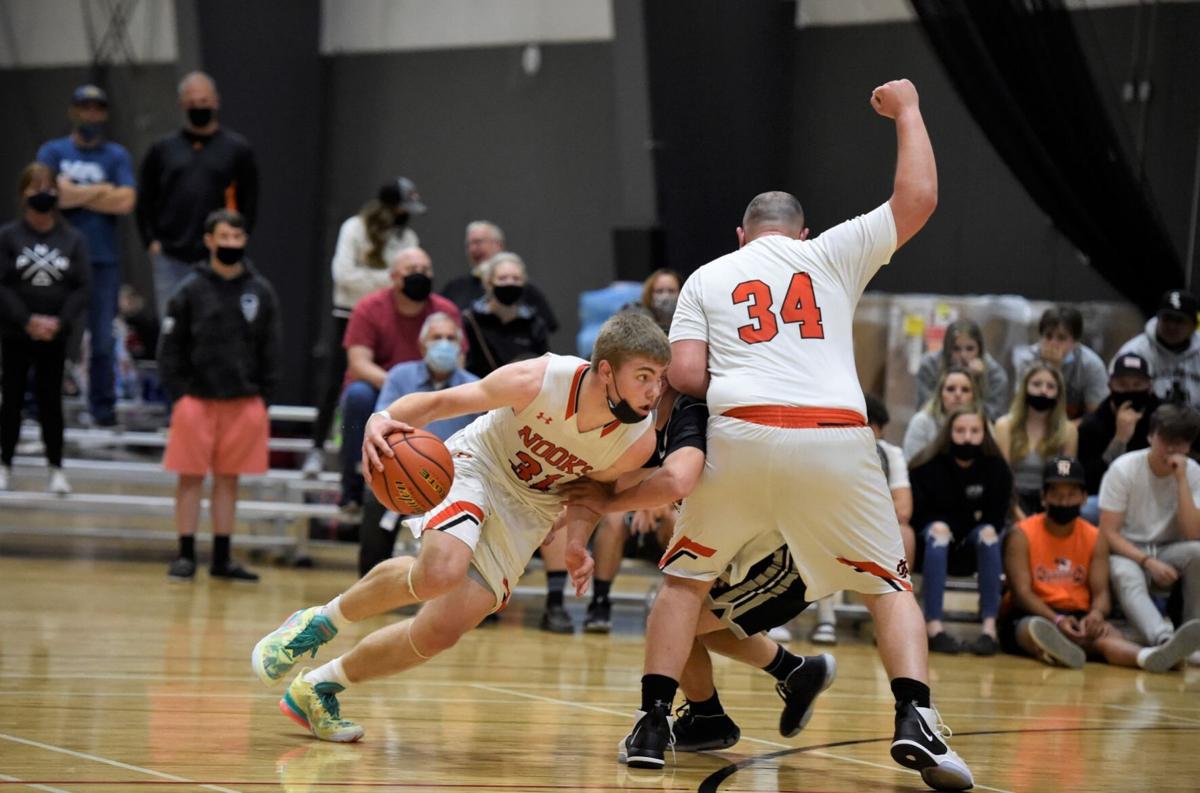 Kalama's Jackson Esary dribbles around a screen set by Ryan Cooney in the first half of the 2B District IV boys basketball championship game at the NW Sports Hub in Centralia, Thursday, June 10. Esary led all scorers with 23 points as the Chinooks claimed the District crown. 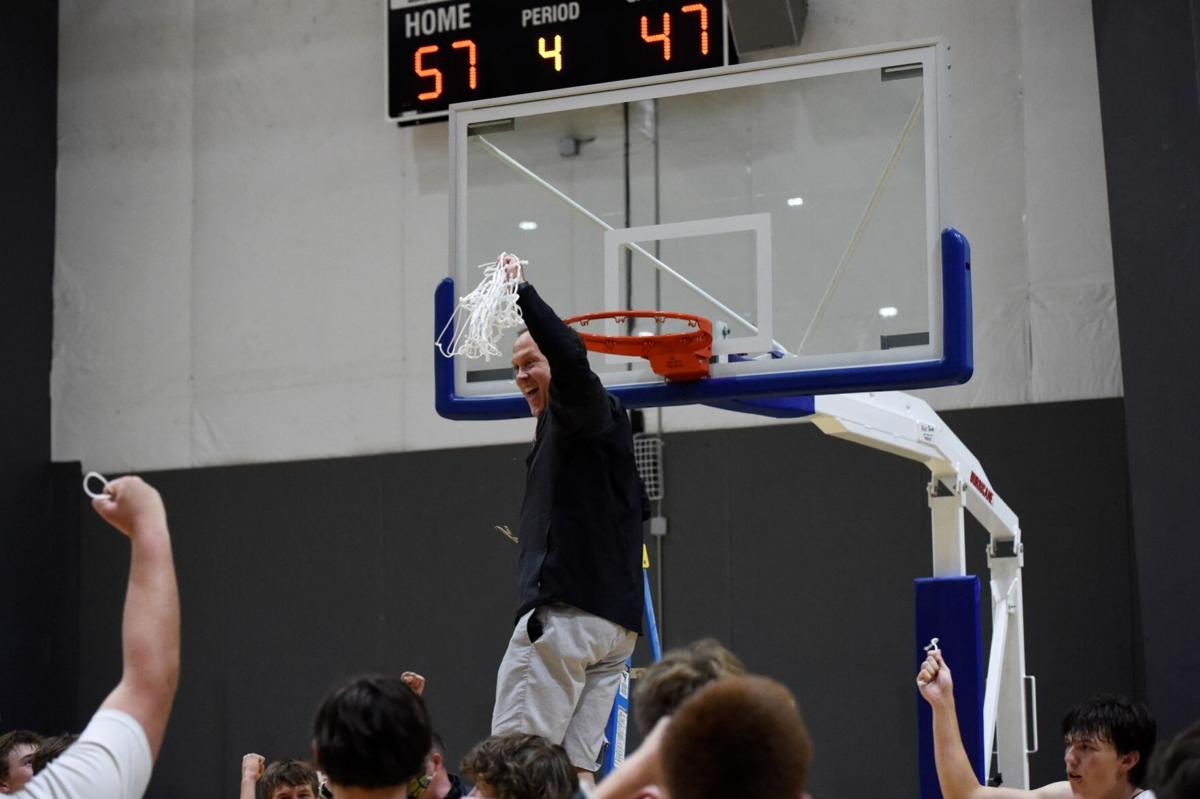 Kalama boys basketball coach Wes Armstrong displays the net to the crowd after cutting it down following the Chinooks' 57-47 win over Napavine to win the District championship, Thursday, June 10, at the NW Sports Hub in Centralia.

On Thursday night at the NW Sports Hub, the boys from Kalama solidified their top dog status with a 57-47 win over Napavine in the District IV 2B championship tilt.

It’s an outcome that few in the high school basketball world would have predicted at the beginning of the season, but it’s an ending that seemed inevitable to the crew from Kalama.

“I don’t think there were a lot of people who thought we’d be District champs,” Kalama coach Wes Armstrong said. “But we knew on that very first day of practice, even though we had guys coming in from baseball and track and all sorts of things, that was the first thing we did was look at that banner on the wall and I think it says 1979 is the last time Kalama won the District title. We knew we had the personnel.”

Against Napavine on the season’s final day the Chinooks put all of their pieces to work in order to neutralize a team that featured a big beast on the block in the form of Keith Olson, and a fleet of sharpshooters hanging out on the perimeter. The Tigers came out early with a zone press and a zone defense before switching up and going man-to-man before the end of the first quarter.

Those changes didn’t’ do much to slow the Chinooks, though, as they seamlessly adjusted their approach to match whatever their foes threw at them.

Keith Olson, a mountain of a man although he’s technically still a boy, managed to get off a 16-point and 10-rebound double-double, but Kalama’s Ryan Cooney made life tough for Napavine’s big baby on the block.

“We won that game right there because of Ryan Cooney. He was the man tonight,” Kalama’s playmaker, Jackson Esary, said.

Cooney and Olson subbed in and out of the game in tandem all night long and the Chinook’s premium post player scored 14 points in the contest. He moved out to the perimeter at times on offense to help clear the lane and, most importantly, he managed to disrupt enough of the Tigers’ game plan to earn the right to climb the ladder and cut down the nets at the game’s conclusion.

“I’m very proud of Ryan. He was pretty frustrated, obviously, because it was a bad matchup for him against Adna, but he was well rested,” Kalama coach Wes Armstrong said. “I think he plays Keith Olson as well as anybody in our league.”

With Cooney running interference and the rest of the Chinooks running circles around him, Kalama was able to carve out a 30-16 lead before the intermission. A 13 of 25 shooting performance in the first two quarters helped to provide a bit of separation as Napavine connected on just six of their 21 shots in the first half and scored all of five points in the second quarter.

Esary was Kalama’s leading scorer on the night with a game-high 23 points, but the Chinooks were a top tier team because of the role players they placed around him. Guys like Brady Burns, Jack Doerty, Dylan Mills, Nate Meyer, Max Cox, and Bradey O’Neil were instrumental in the quest to hang a District champion basketball banner in the school on the hill for the first time in more than four decades.

Esary himself pointed a finger at the group as a whole, and especially at O’Neil, for always providing a spark when it mattered most.

“He may not have scored a lot of points but he got a bunch of boards, played great D and he plays great minutes. Every time he comes in he does what he’s got to do,” Esary said amidst the postgame commotion with one of the scissor game nets draped around his neck. “We know what we’re doing. That’s why we’re a good team. That’s why we’re cutting down that net.”

Out of the halftime break, though, Napavine found some of the juice that they’ve become known for. They changed up their defense and rerouted their offense to work from the inside out and wound up winning the third quarter 16-8 to scratch their way back into contention. James Grose scored ten points on the night for the Tigers to finish as their second leading scorer.

With six minutes left in the game Napavine had whittled the gap down to just four points and the Chinooks were looking hesitant on offense as if they could just wait for the clock to run out.

But Kalama’s wild man on the sideline had an answer for that problem, too.

“We put Jackson in the middle and let him facilitate so we didn’t have guys just standing,” Armstrong explained. “Cooney had a couple nice cuts, Max Cox had a couple nice cuts, so we were able to take on that run of theirs and kind of bled them a little bit because they were playing with a lot of spirit at that time and those couple of buckets really got the momentum back in our favor.

Burns, playing on a severely sprained ankle and wincing in obvious pain after every collision on the court, continued to gut out every possession until the Chinooks had run their lead back out to double digits with short time on the clock. When he was finally subbed out, the senior nearly collapsed into the waiting arms of his coaches and teammates on the bench.

“It was constant pain basically. I was struggling to push off of it. I couldn’t jump on it. I definitely felt week throughout the last few games,” Burns admitted. “I just had to battle through adversity and the guys helped me out.”

Still, Burns insisted that after suffering the injury at the start of the tournament he never considered sitting out.

“Not a doubt. I knew when I rolled it I’d be fine the next day, I was not sitting out. That was not an option,” he said. “Take care of the ball, that’s my job. Get it to people that are open… it’s just all about spreading the love. That’s all it is.”

After finishing second in the Central 2B League and playing the final three games of their season far from home, Burns had no doubt in his mind what pushed the Chinooks over the top when it mattered most.

“We’ve got the most heart of any team there is. I mean, we battled through adversity after adversity and that’s just part of our team,” Burns said. “That’s part of our mentality. Since day one our coach, Armstrong, has said that our heart makes us unique and that showed today.”

After cutting down the second net on the court and mobbing in celebration with his players Armstrong took a moment to confirm Burns’ assessment of what made Kalama so special during a season that was so strange.

“This is one of the hardest working groups of guys I’ve ever coached. We didn’t make it easy for them,” Armstrong said. “We tried to make our practices more difficult for them this year and I know they hated us for the first few weeks of the year, but once they bought in we became a very, very tough basketball team.”

NBA plans to start the new season in October

There are innumerable words that can be used to describe a team that is playing well — hot, blazing, scorching, etc. — but none of them would …

In a season where normal has been thrown out the window, Mark Morris has still found a way to play its best basketball at the right time. That…

Mark Morris had its hands full with Fort Vancouver’s Kahlil Singleton, but the top-seeded Monarchs pieced things together when it counted and …

CENTRALIA — In the wild year of high school sports in Southwest Washington that has been 2021, it was fitting that the 2B basketball season en…

2B Boys Basketball: Wahkiakum opens Districts with win over Winlock

ILWACO – Much to the Kalama boys basketball team’s frustration, the crowd at Jon C. Kaino Court started to believe.

TOUTLE — There was no easy rolling for the No. 1 seed in the 2B District IV tournament, but Toutle Lake did enough to advance, opening its pos…

2B Boys Basketball: Wahkiakum bounced in semis by Napavine

CENTRALIA – It was a game of runs in the first 2B District IV semifinal at the NW Sports Hub, and as it happened, Wahkiakum didn’t get the fin…

Kalama boys basketball coach Wes Armstrong celebrates with his team after cutting down the net at the NW Sports Hub, Thursday, June 10, following the Chinooks' 57-47 win over Napavine in the 2B District IV championship game.

Kalama's Jackson Esary dribbles around a screen set by Ryan Cooney in the first half of the 2B District IV boys basketball championship game at the NW Sports Hub in Centralia, Thursday, June 10. Esary led all scorers with 23 points as the Chinooks claimed the District crown.

Kalama boys basketball coach Wes Armstrong displays the net to the crowd after cutting it down following the Chinooks' 57-47 win over Napavine to win the District championship, Thursday, June 10, at the NW Sports Hub in Centralia.