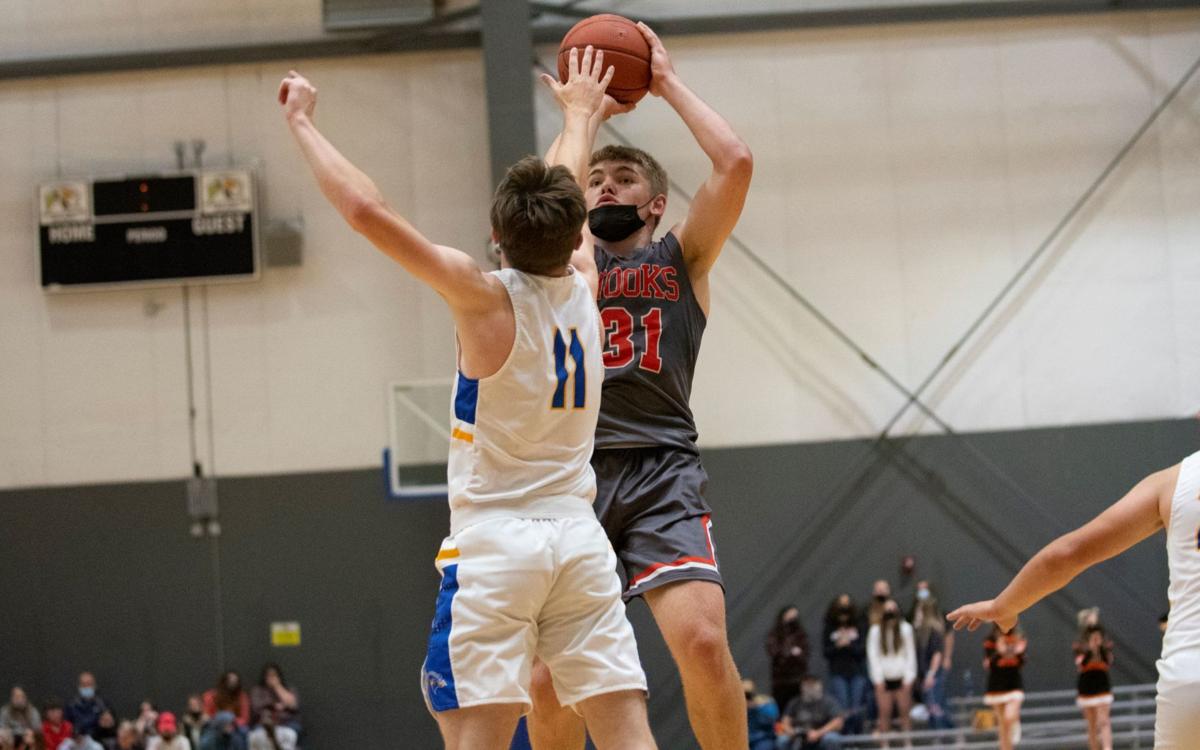 Kalama's Jackson Esary rises up to shoot with a Pirate defender in his face during the 2B boys basketball District IV semifinals at the NW Sports Hub in Centralia. Esary scored a team-high 13 points as the Chinooks notched a 50-33 win. 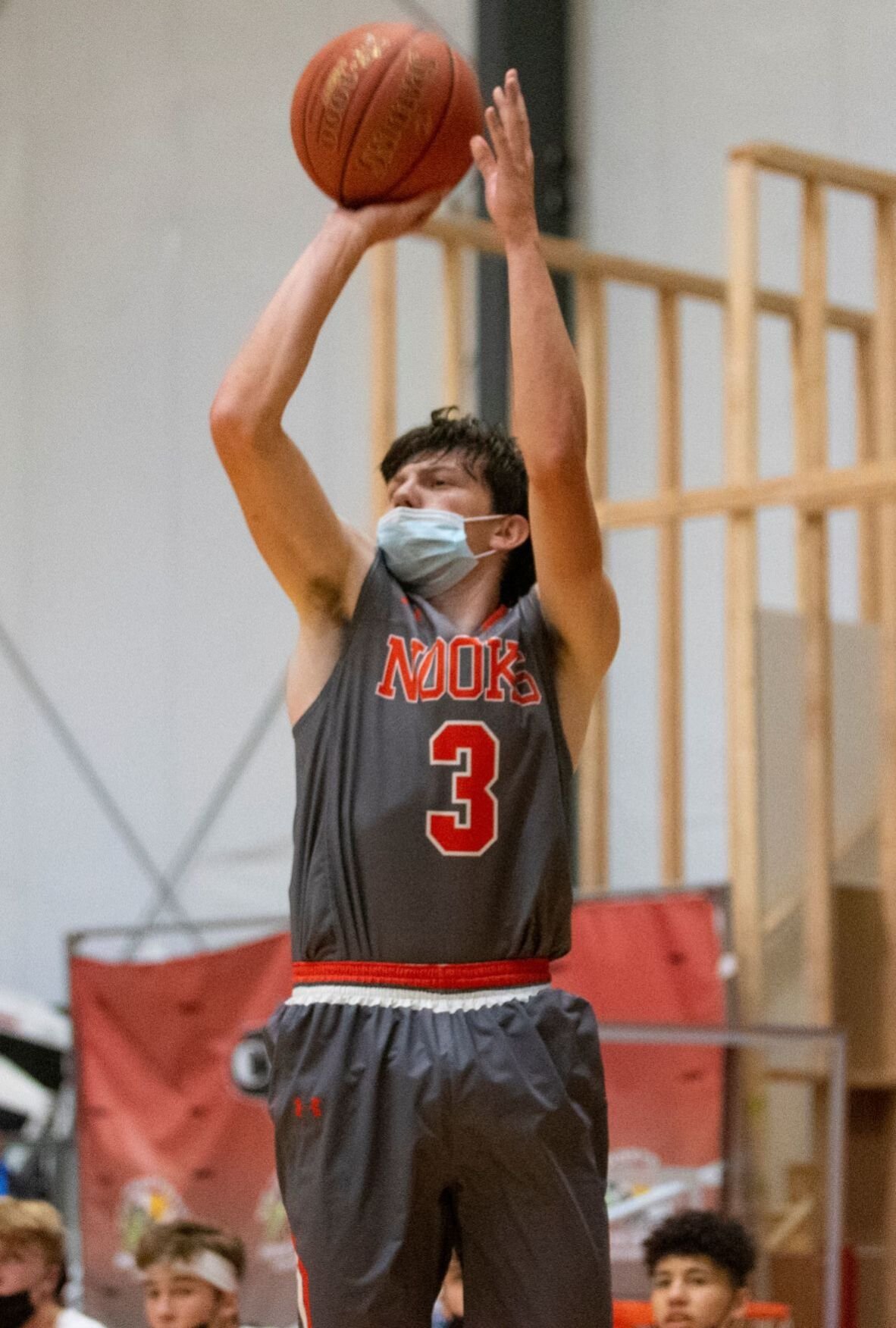 Kalama's Brady Burns goes up for a shot against Adna in the first half of the 2B District IV boys basketball playoffs. Burns scored 11 points in a 50-33 victory.

CENTRALIA — Kalama had a very specific game plan for foiling the Pirates on Wednesday as they faced off with Adna for a spot in the 2B boys basketball District IV championship game. Where most teams simply try to outscore their opponents, the Chinooks were most interested in stopping the Adna offense before it ever got going.

“We were just straight ball pressure the whole time. We knew they couldn’t handle the pressure we bring so we knew we had to bring that on-ball pressure, off-ball pressure all game and just stay in their face and we knew they’d fold,” Kalama senior Bradey O’Neil said. “That comes from (Coach Armstrong), and the whole team. Deep down we’ve been doing this for like 12 years now and we want to win.”

And win they did, by a score of 50-33 in order to secure their spot in the season’s biggest game.

Of course, while defense is fun to talk about, offense is fun to play, and without one the other is useless when it comes to actually winning ball games. To that end, Kalama ripped the lid off their basket in the second quarter after scuffling to a 12-6 advantage after the first eight minutes of play.

Jack Doerty knocked down a 3-point shot to open the second quarter to get the ‘Nooks going and then 30 seconds later Brady Burns buried a long ball of his own. Just over a minute later, Jackson Esary cashed in another deep ball and at the five minute mark Burns dropped in a put back to cap an 11-0 run that gave Kalama a 23-6 lead.

For a moment it seemed that the Chinooks already had the cat all the way in the bag. But Adna’s Chase Collins had other ideas, going off for eight quick points to get the game back within ten points. By the time the intermission arrived, the Pirates trailed by just seven points and Kalama was left in a peculiar position where they held all of the lead but none of the momentum

“We don’t do real well when we have big leads,” Kalama coach Wes Armstrong said. “We kind of let teams hang around instead of putting the pedal to the metal.”

After the offense stalled out for both teams at the start of the third quarter Kalama made a change by inserting Nate Meyer into the lineup. Meyer, a 6’4” junior, was quickly interjecting in every situation on the floor. He was swiping steals. He was grabbing boards. He was a human pogo stick looking for shots to block and defenders to body.

Once Burns knocked down a 3-pointer off a loose ball scramble to get the second half scoring started, Meyer was free to unleash mayhem against an Adna team that never looked truly comfortable against their frantic foes. The Pirates settled for two points in the third quarter and a meager dozen in the second half as their title aspirations expired.

“Nate Meyer came in and he rebounded well, hit a couple nice buckets for us and his energy for us is really contagious,” Armstrong said. “He’s developed into my sixth man to come in with constant energy. He can guard anyone on the floor.”

Meyer finished the game with six points and 11 rebounds.

As Meyer worked his way into the thread of the game other Chinooks started to come to life as well. First, Jackson Esary rose up in traffic and tried to pack home a one-handed dunk only to find back iron. Soon, though, Kalama was sharing the ball easily and the open looks began to pop up.

O’Neil noted that there are several Chinooks with a knack for dumping in points when the cylinders get tight.

“We’ve got Brady Burns, we’ve got my boy Jackie Cheese (Jack Doerty) he’s definitely a hitter,” O’Neil said. “Max Cox when he’s feeling it he can score from any spot on the point.”

In their semifinal affair Esary led the way to victory with 13 points, four assists and three steals. Brady Burns added 11 points with two steals, while Meyer finished with six points and a team-high 11 rebounds.

“I can’t tell you how proud I am of Brady Burns. He rolled his ankle last night against Ilwaco, we didn’t even think he’d be able to play,” Armstrong noted. “He was in excruciating pain and played phenomenal.”

That short offensive outburst allowed the Pirates to run their lead out to a comfortable proportion over the final 12 minutes.

“We just tried to do our best to disrupt them and our guys, you know, holding Adna to 33 points, I couldn’t be more proud of these guys,” Armstrong said. “They executed the game plan perfectly.”

If the Chinooks can manage to keep Napavine to similar point totals from their secondary scorers in the District Championshp game, it’s safe to assume that they’ll like their chances for cutting down the nets.

“We’re happy to be here and playhing for a Distrcit title,” Armstrong said. “Napavine is very talanted and well coached. They’re going to be a little bit hungry. We beat them at their place earlier this year when we played one of our finer games.”

Sporting a pair of postgame shades indoors that seemed to foretell the particular brightness of his future, O’Neill said there are few secrets to the Chinooks plan for dismantling Napavine. Primarily, the name of the game and the key to victory will boil down to defense once again.

Kalama was scheduled to face Napavine in the 2B District title game at 7:30 p.m., Thursday.

Kalama's Jackson Esary rises up to shoot with a Pirate defender in his face during the 2B boys basketball District IV semifinals at the NW Sports Hub in Centralia. Esary scored a team-high 13 points as the Chinooks notched a 50-33 win.

Kalama's Brady Burns goes up for a shot against Adna in the first half of the 2B District IV boys basketball playoffs. Burns scored 11 points in a 50-33 victory.