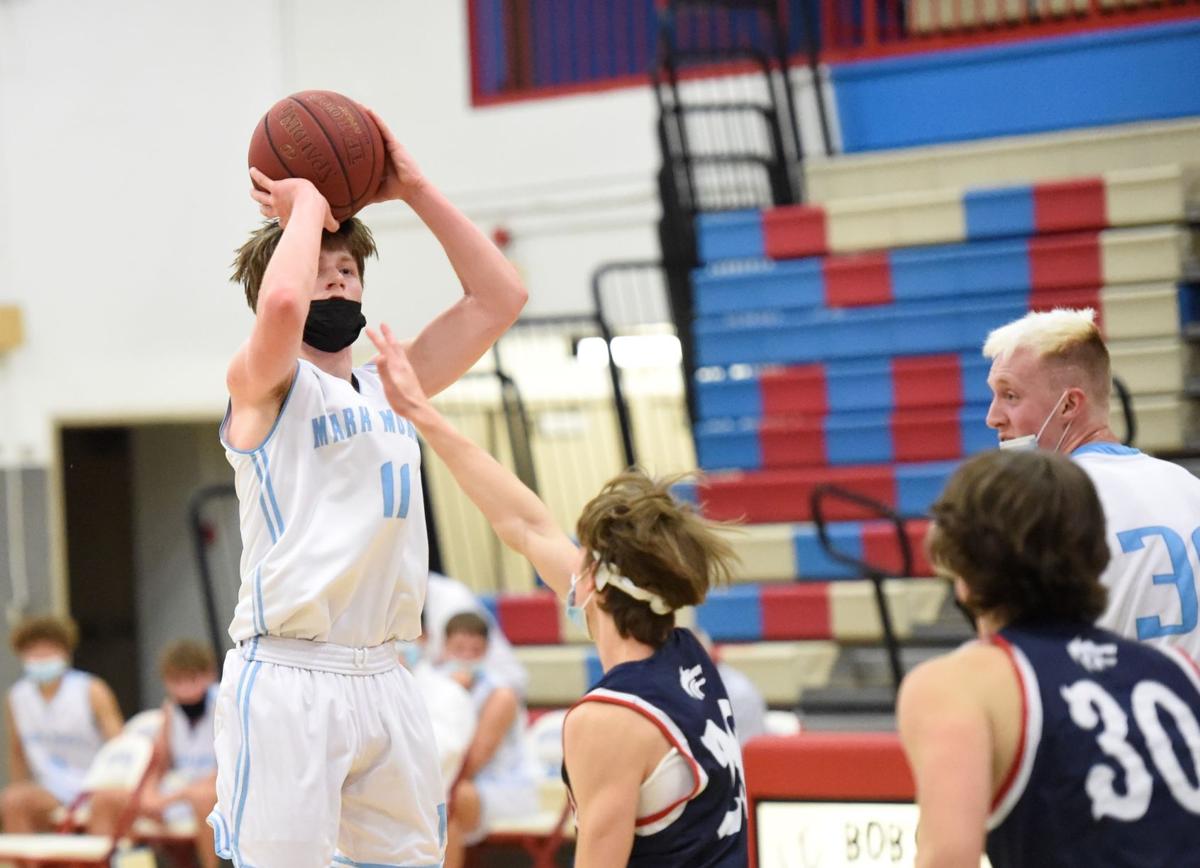 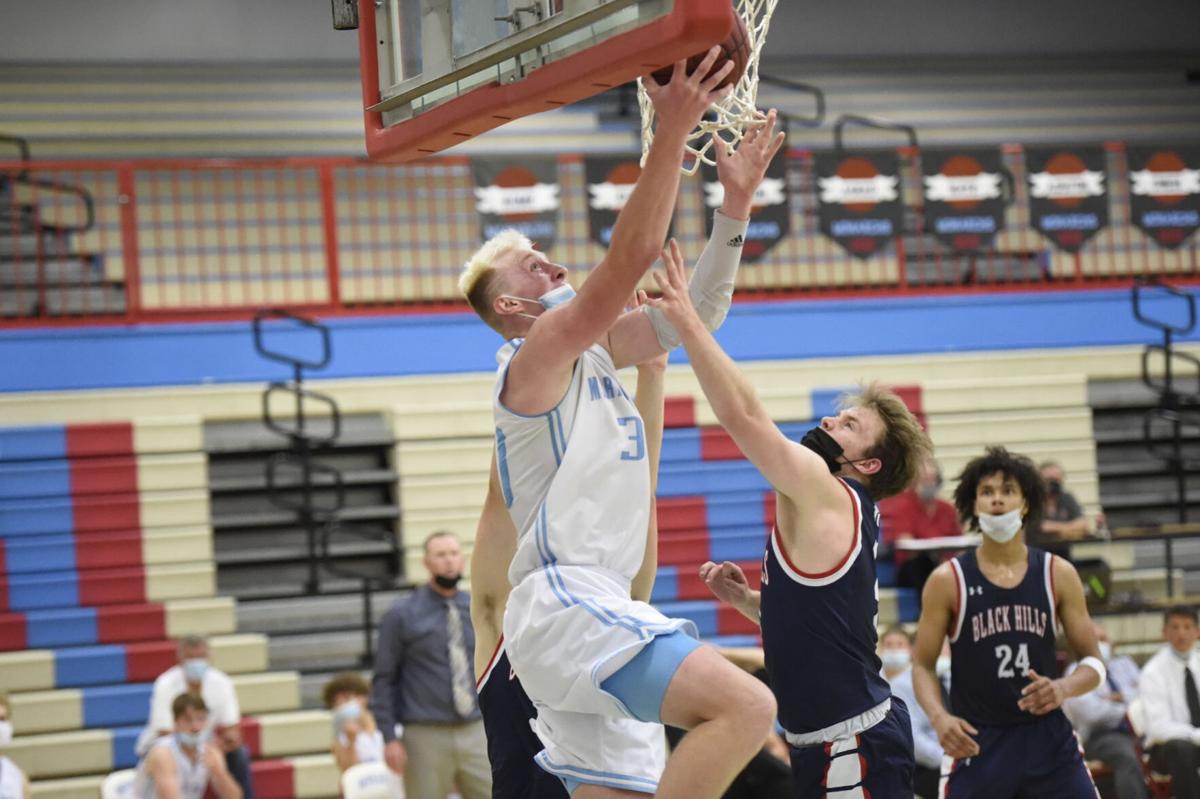 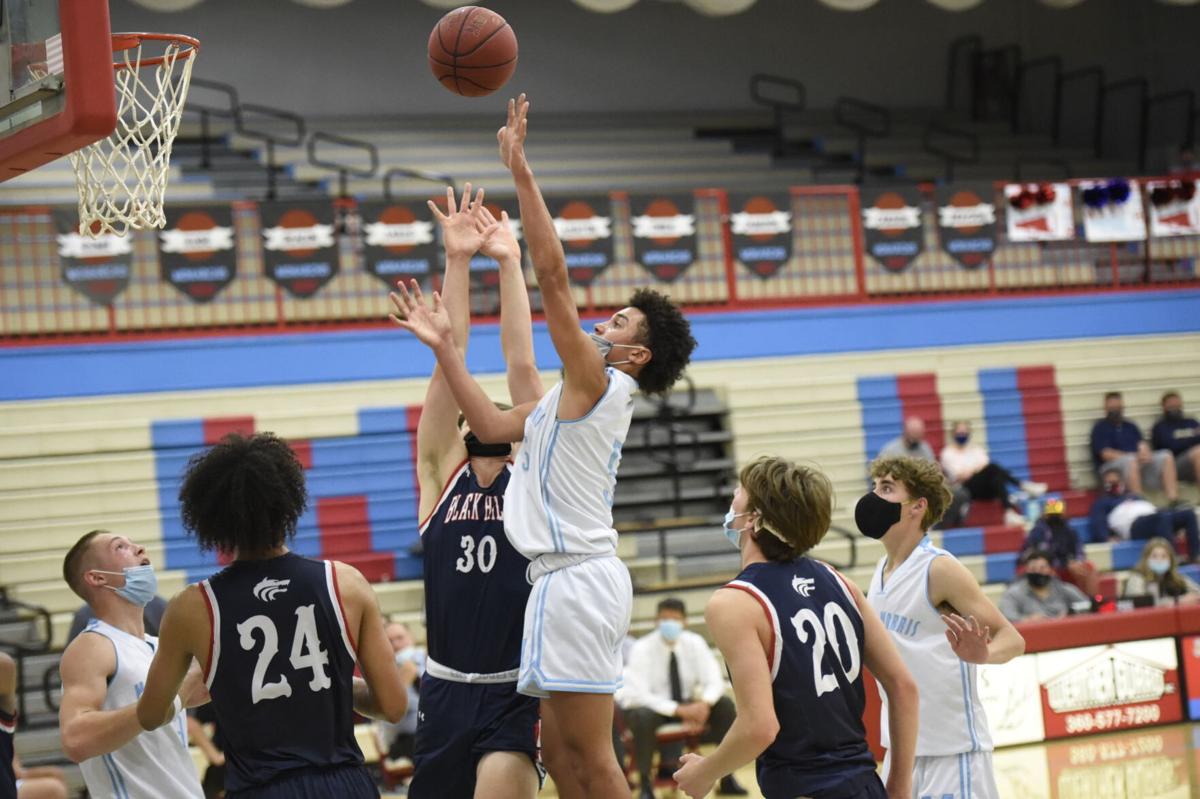 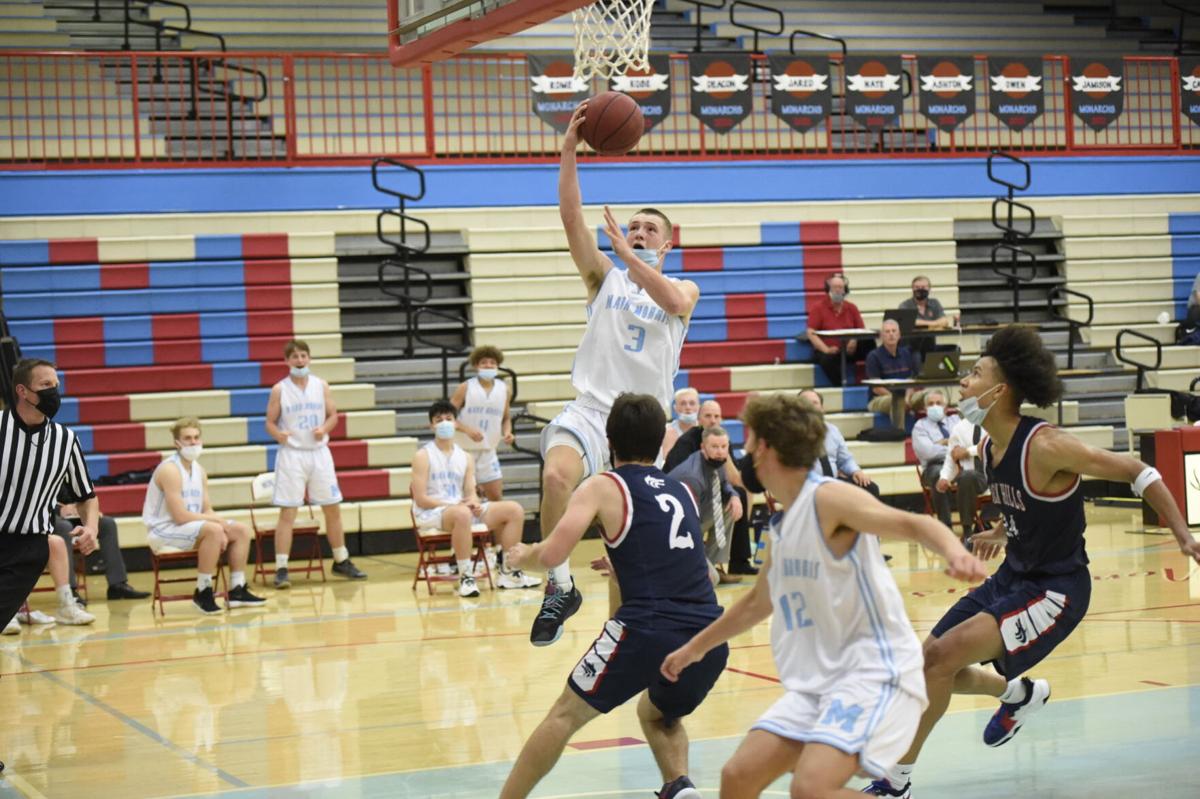 Mark Morris' Deacon Dietz (3) drives to the hoop for a layup against Black Hills on Wednesday, June 9, at Mark Morris High School.

In a season where normal has been thrown out the window, Mark Morris has still found a way to play its best basketball at the right time. That time just happens to be June instead of March.

On Wednesday, the Monarchs dominated Black Hills in every aspect of the game in the District IV boys semifinals. Nate Millspaugh led the charge and tied a school record with eight three pointers in an 88-45 win for the Monarchs.

“For me, just confidence and guys were finding me…guys were getting me the ball and we were finding the open guy,” Millspaugh said of his shooting performance.

The win shows just how much, and how rapidly, the Monarchs have grown in this shortened season. On May 26, the Monarchs traveled on the road to play Black Hills and eked out a 60-58 win over Wolves. The Monarchs flipped the script in a big way with the 43-point win on Wednesday.

“I just think it’s our overall team growth mentally,” MM coach Bill Bakamus said. “We just have a different approach than we did at the beginning of the season or even midseason. We’ve fine-tuned some things that we want to do both offensively and defensively.”

The Monarchs were able to jump on top early behind the hot shooting of Millspaugh, who hit three first-quarter 3-pointers to get MM rolling. Black Hills wasn’t ready to go away, though, clawing back to within three points early in the second quarter. But the tandem of Millspaugh outside and Ashton Harvey in the paint helped the Monarchs build the lead up to 12 by halftime at 38-26.

When Harvey is on in the post, he draws attention and makes it easier for MM to find open looks on the perimeter.

“We have good spacing,” Bakamus said. “We’re able to work off of Harvey and when you have a guy at the pivot in there that’s good and tough and you’re able to get the ball to and you can work off of him, it just gives you different things that you can do.”

The Monarchs came out ready to bury the Wolves in the third quarter.

Kobe Parlin opened up the scoring for the Monarchs out of the intermission with back-to-back 3-pointers coming from each corner. Parlin started the quarter hot and only got hotter as he finished with 14 points in the third and the Monarchs outscored Black Hills 30-8 to take a commanding 68-34 lead into the fourth.

“In the second half, we brought more juice all around and once I started, everybody started hitting and it created more offense,” Parlin said.

Bakamus praised Parlin’s performance in the third and has high hopes for him moving forward.

“He’s just kind of rounding out all of the facets of his game, which is really nice because he’s only a 10th grader,” Bakamus said.

Three consecutive makes from Deacon Dietz, another sophomore, to start the fourth started the running clock rule and the Monarchs were able to finish off the Wolves in a hurry.

Millspaugh’s hot shooting night led him to score a game-high 28 points to lead MM. He also dished out a team-high six assists.

“First off, he can shoot the ball from deep…he has great accuracy from pretty much anywhere on the floor,” Bakamus said of Millspaugh. “He’s very confident in his game and tonight he was just the recipient of Black Hills helping (on defense) a little more off of him.”

Harvey finished with a double-double as he scored 19 points and grabbed 11 boards for MM. Parlin and Dietz were also in double figures with 16 and 14 points, respectively.

Mark Morris (12-3) now gets the opportunity to host the District championship against W.F. West at 7 p.m., Thursday.

“I’m just tickled to death to be able to say we’re going to be able to play a District Championship at Natt Court because we’ve never done that before and I’m excited for the kids and the opportunity,” Bakamus said.

The Monarchs beat W.F. West in an earlier matchup this season, but Bakamus expects strong competition from a bouncy Bearcats bunch.

Despite an 88-point showing on offense on Wednesday, Millpaugh was already preparing for the next challenge.

“Tomorrow’s a new day, we’ve got to do our thing and hopefully cut the net down,” he said.

Mark Morris' Deacon Dietz (3) drives to the hoop for a layup against Black Hills on Wednesday, June 9, at Mark Morris High School.