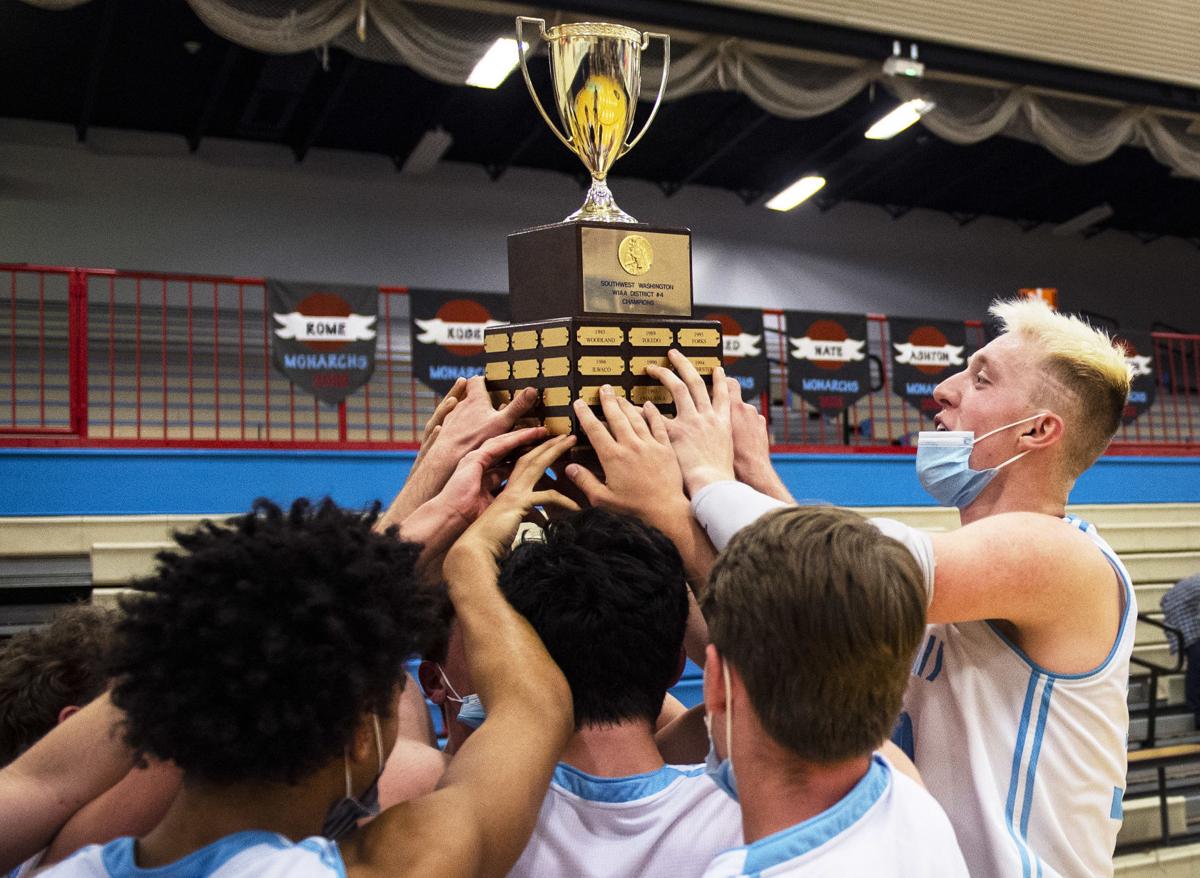 The Mark Morris boys basketball team holds up their trophy in celebration of their championship win Thursday at home. The Monarchs beat the W.F. West Bearcats 94-46. 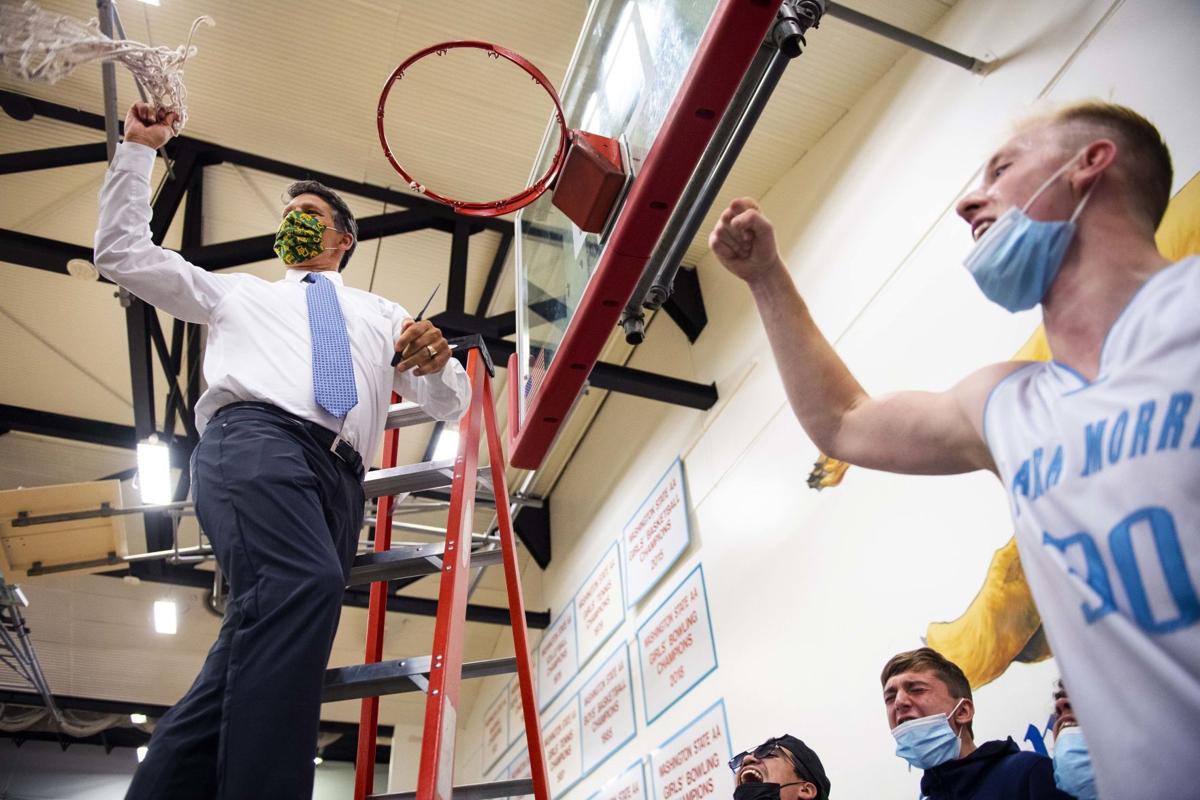 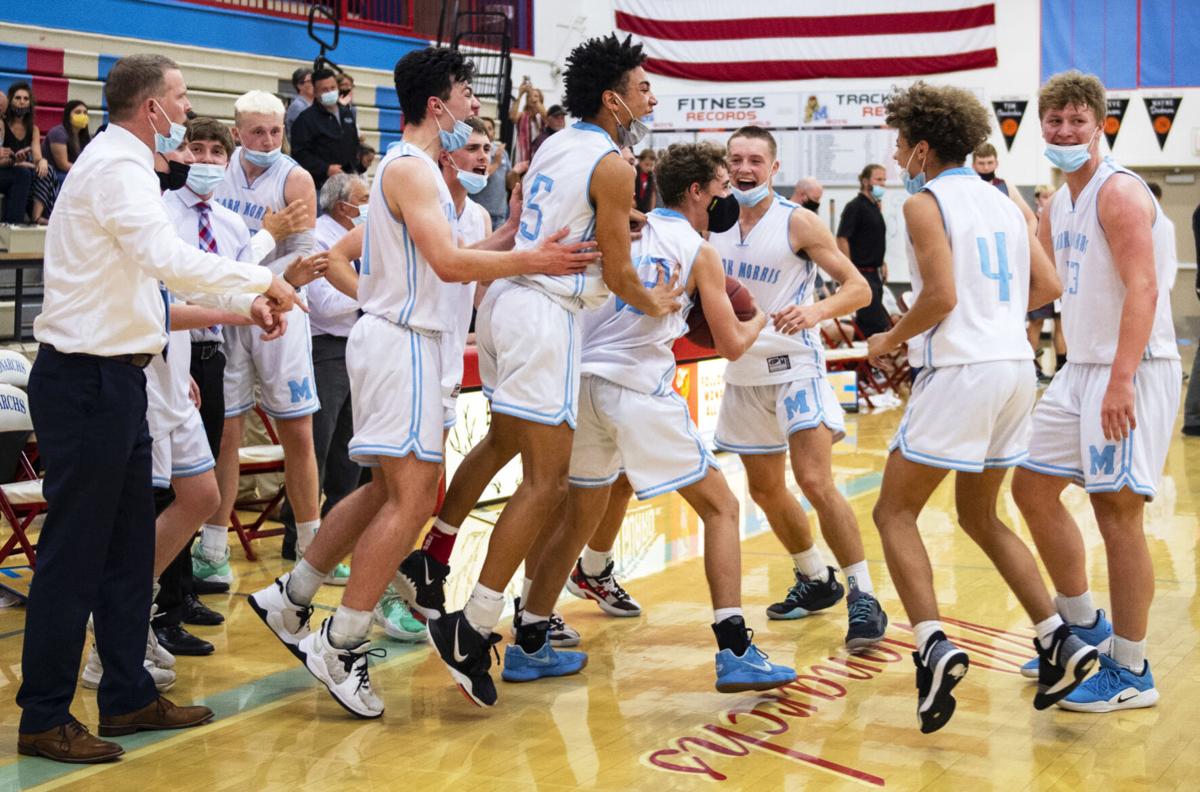 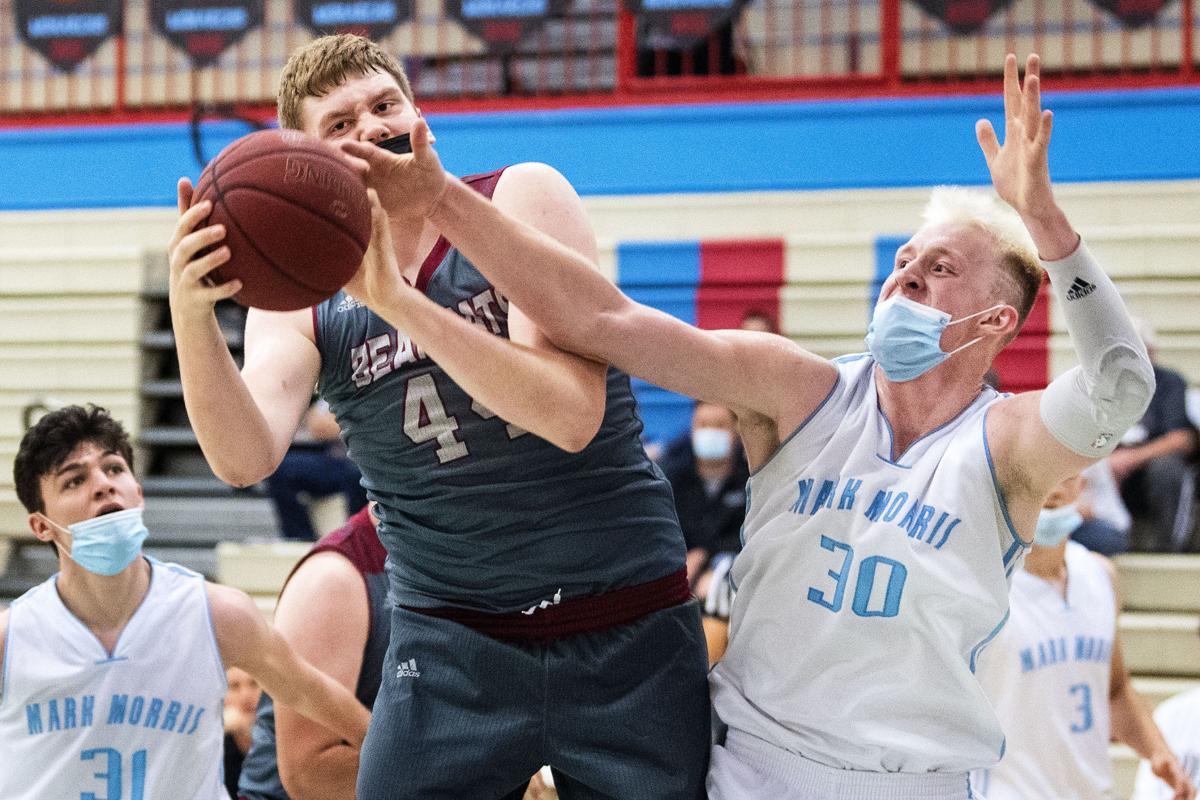 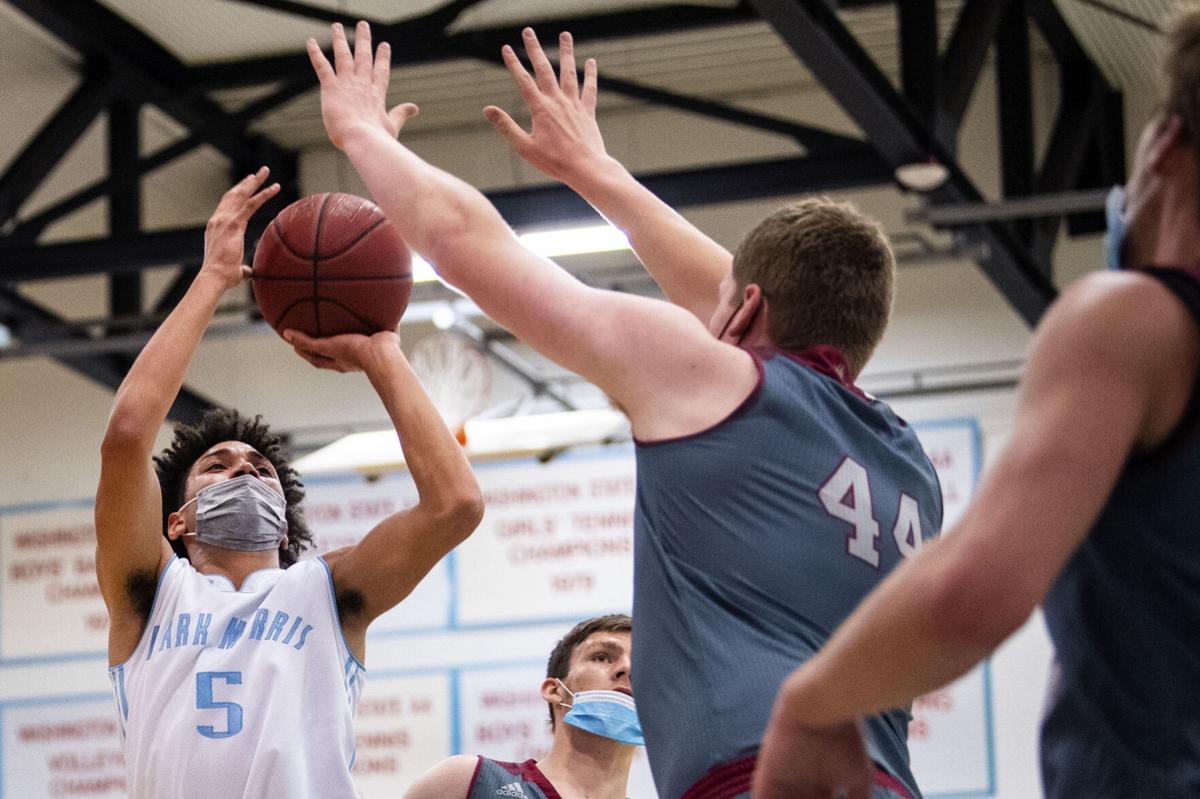 There are innumerable words that can be used to describe a team that is playing well — hot, blazing, scorching, etc. — but none of them would adequately reflect just how well the Mark Morris basketball team played down the stretch this season.

“This has been an emotional grind on adults and kids,” MM coach Bill Bakamus said of the journey to the title in the COVID-shortened season. “With that said, our kids did the right things. We tried to distance ourselves and take all the precautions, but it really galvanized us through the whole thing.”

In the semifinals on Wednesday, the Monarchs dominated Black Hills in an 88-45 thrashing that looked like the ceiling for how good they could play. But they topped that performance on the title game on Thursday with a 94-46 blowout of W.F. West.

“Near the end we knew we were going to play good basketball,” Bakamus said. “We committed to playing good basketball for each other. Those were two of the better offensive and defensive performances that we’ve had back-to-back here in many years.”

The Monarchs were lights out from beyond the arc as they went 13-for-19 from long range. Shots were falling from all over the floor for the Monarchs and at times it seemed they couldn’t to miss, finishing with a 60% mark on their shots from the field.

“The 3-ball is an electric thing,” Bakamus said. “You can live by it and die by it, it’s just that we’ve found our mark recently. When we’re able to move the ball and get our multiple actions going and the ball can move from one side of the floor to the other, that’s when we’re most deadly.”

The Monarchs were thrust into the top seed to represent the 2A Greater St. Helens league after R.A. Long’s season was canceled before the tournament due to COVID-19 exposure. But the Monarchs looked every bit deserving of the top spot in the bracket against the Bearcats.

The Monarchs even went with a small lineup without Harvey on the floor for a stretch in the second.

“When we took Harvev out, we did go small and it was a risk because the game was still in the balance, but we did it for a reason and that was to move some of their bigs out on the perimeter and see if they could guard some of our guys,” Bakamus explained. “Well it paid off because we were hitting 3s.”

Like in the semis, the Monarchs played their best basketball in the third quarter and outscored the Bearcats 28-11 to extend the lead to 40 points. Heading to the fourth quarter with a running clock, the celebration began a little early. Olson led the big quarter with 12 points for the Monarchs.

The fourth served as a victory lap for the Monarchs. Millspaugh sent the crowd into a frenzy with back-to-back deep 3-pointers early in the quarter as the Monarchs seniors and starters slowly were subbed out of the game.

It was the freshman that led the way for MM as Olson finished with 23 points and hit five 3s on the night. Harvey controlled the paint and finished with a double-double with 18 points and a team-high 11 points for the Monarchs. Millspaugh also scored 18 and fell one assist shy of a double-doubled with nine from the point guard spot.

“Honestly it starts on defense,” Olson said of MM’s offensive explosion down the stretch. “We’re cleaning up every defensive board and we’re playing great defense and it leads to offense and we break really well. Once we can get the boards, it leads to offense.”

Harvey said the team’s bond is also a big part of their success.

“Ball movement and trusting each other,” he said. “We’re really confident in the ability to share the ball and trust that the guy is going to make the shot.”

Monarch players and coaches alike were confident in the team’s ability to make a run in the State Tournament, if there had been one, based on the way they played down the stretch.

“I think we’re peaking,” Bakamus said. “If there was a State Tournament, I think we are a bona fide State team. We’ve proven we’re the best team in Southwest Washington 2A and I’m happy that we got our 11th District Championship.”

Still, Mark Morris got to finish the season with the satisfaction of cutting down the nets on their home court, and that’s a tidy way to cap an unprecedented season.

“It’s the best feeling,” Harvey said. “I don’t even think this has ever been done before — a District win on your own floor with all of your fans — so it’s just that much more special.”

The Monarchs’ improvement from the beginning of the year was tangible. They travelled to W.F. West on May 13 and were able to pull out a 64-48 win. But on Thursday, the Monarchs completely outclassed the Bearcats from top-to-bottom.

“Getting rid of some of the silly mistakes that we made,” Bakamus said on one of the keys to MM’s improvement. “We asked each guy to kind of trim off a few things that we weren’t doing well, self-reflect and evaluate their own game and they all did.”

During the win-streak, Bakumus commended his team for how well they played for each other and not just for themselves.

“The other was just the unselfishness of making the extra pass, the extra play,” he said. “When you have talented kids that can score the ball, you have a tendency to basket hunt, but when you have a group that can cohesively work together like these guys…it was just a really good sense of feeling good about playing for each other.”

Bakamus was the last to cut the nets as the players and students gathered around the hoop to celebrate. He was proud of the way his outgoing seniors — who graduate on Saturday — played to finish the year.

“I’m going to remember this senior class for just how much they stuck with it,” he said. “We get a new player in Nate who is very dynamic and he fit in great. I’ll just kind of remember this whole group as being a true bond of friends. When you have friendship on the court, it can propel a team to great heights and it showed during this District Tournament.”

Fans that were fortunate enough to attend games this season may have noticed that Bakamus took a step back from some coaching duties as assistant Steve Kloke stepped up to carry more weight on the sideline. Despite the change, Bakamus has every intention of being back on the bench next season.

NBA plans to start the new season in October

In a season where normal has been thrown out the window, Mark Morris has still found a way to play its best basketball at the right time. That…

Mark Morris had its hands full with Fort Vancouver’s Kahlil Singleton, but the top-seeded Monarchs pieced things together when it counted and …

CENTRALIA — In a season chock-full of uncertainty there was one thing basketball fans could count on; if you were going to watch the Kalama Ch…

CENTRALIA — In the wild year of high school sports in Southwest Washington that has been 2021, it was fitting that the 2B basketball season en…

2B Boys Basketball: Wahkiakum opens Districts with win over Winlock

ILWACO – Much to the Kalama boys basketball team’s frustration, the crowd at Jon C. Kaino Court started to believe.

TOUTLE — There was no easy rolling for the No. 1 seed in the 2B District IV tournament, but Toutle Lake did enough to advance, opening its pos…

2B Boys Basketball: Wahkiakum bounced in semis by Napavine

CENTRALIA – It was a game of runs in the first 2B District IV semifinal at the NW Sports Hub, and as it happened, Wahkiakum didn’t get the fin…

The Mark Morris boys basketball team holds up their trophy in celebration of their championship win Thursday at home. The Monarchs beat the W.F. West Bearcats 94-46.