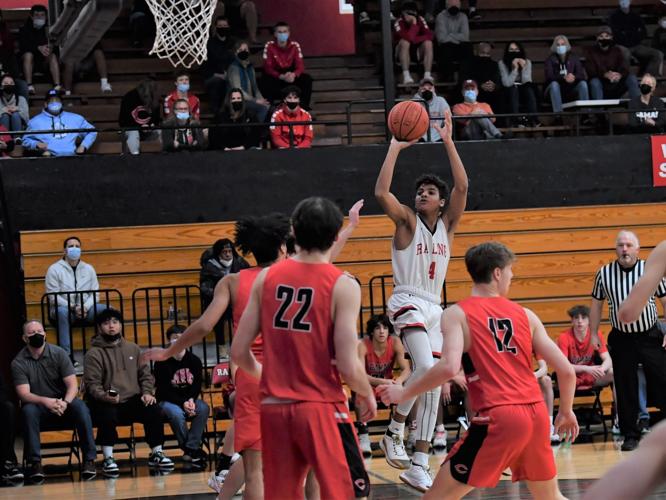 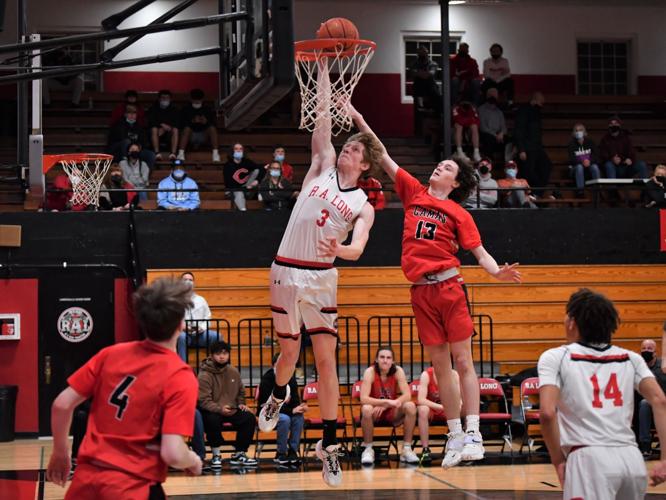 R.A. Long senior Aaron Ofstun throws down a transition slam in the first quarter of the Jacks' 73-62 loss to Camas on Jan. 19. 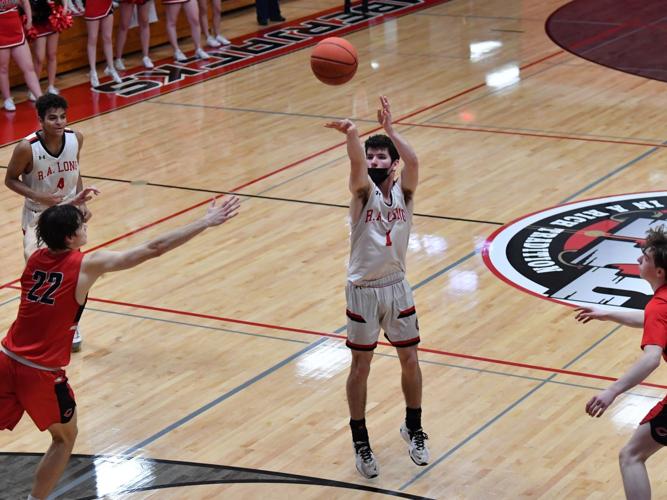 The R.A. Long boys basketball team started off red hot but finished ice cold, and found out that’s generally the worse order of those two extremes in a 73-62 loss to 4A Camas on Wednesday.

Originally, RAL was scheduled to take on Washougal, but COVID-19 issues in the Panthers’ program forced that came off the slate Tuesday afternoon. Wednesday morning, the Lumberjacks linked up with Camas, and the game between the number six ranked 4A Papermakers and the number three ranked 2A Jacks was announced less than 10 hours before tip-off

The Lumberjacks nailed six 3-pointers in the opening quarter, bolting out on a 14-3 run late in the fourth quarter to lead 27-14, punctuated by an Aaron Ofstun transition slam dunk that nearly took the roof off of a jumping Lumberdome.

But the rest of the way, just about nothing fell, and the Jacks couldn’t figure out much of anything that worked better as they watched their guests climb out of the hole in the second, hang around in the third, and finally take the lead for good in the fourth.

“I told my guys when we were up 27-14, ‘They’re not going to just die down. They’re too good of a team, they’ve got too much pride,’” RAL coach Jeray Key said. “They gave us a really good shot there.”

After going 6-for-10 from beyond the arc in the first quarter, the Lumberjacks managed just four triples the rest of the way, all of which came in a quick spurt of life early in the third quarter that put them up by seven. Aside from that, RAL was hampered by 22 long-range shots missing the mark, as the Jacks went just 4-for-26 on threes in the final 24 minutes.

“I let them play off the feel of the game, but you can’t settle for three-pointers the whole game,” Key said. “You have to get downhill and try to get some layups. We shot way too many three-pointers.”

Part of the problem started down low. From the opening tip, every time Ofstun got the ball anywhere near the post he found himself hounded by at least two defenders. Early on he was able to pass out to Cavin Holden, Jamond Harris, and the rest of RAL’s sharpshooters for easy threes. But as the game went on and the triples stopped falling, it became harder and harder for RAL to operate its offense without the chance of an easy post-up down low.

Ofstun finished with 15 points. Six came on threes, four came in transition, and two came off a putback, but the Papermakers kept him quiet scoring-wise in the low post. At the end of the fourth quarter, he slammed home a jam in transition, but rolled his ankle on the way down, left the game, and only returned for a couple minutes in the fourth before watching the rest of the contest on the bench.

“When he started going a little bit too quick, he might have had a travel or turnover,” Key said. “When (they) double him with two 6-6 guys, that’s something he hasn’t seen yet, which was good to see because now he’ll learn from this, and he’ll get better when he watches the film from this.”

Holden ended up leading the Lumberjacks with 19 points, while Harris had 15.

At the same time, the Papermakers opened up a suffocating press in the second quarter, and for much of the period, the Lumberjacks had no answer, leading to a 13-0 run that got Camas to within a point. The Lumberjacks went from three turnovers in the first quarter to seven in the second, and as the game went on, Camas simply stuck with it, not letting RAL get an easy foot coming up the court.

“We turned it over a few times against their press, but it wasn’t just that we were turning it over against their press in the backcourt,” Key said. “Once we broke it, we were just jacking up shots and they weren’t going in. Then when we did turn it over three or four times in a row and they did score, it’s that easy to climb back into the game.”

After the Jacks played it even in the third quarter, it all went downhill in the fourth. R.A. Long went 0-for-9 on three-pointers and couldn’t crack the scoreboard for the first five minutes, while Camas went on a 12-0 run to take a double-digit lead.

“They had five fouls in the third quarter and we couldn’t get to the double bonus until late in the second when we needed to attack,” Key said. “We had a lot of open looks, let me tell you what. And we can shoot it. But they didn’t go in. Once it’s not going in, you’ve got to try to see it go through the hoop with a layup or something, and we just didn’t get that.”

The Jacks finally did get to see a layup go through the hoop, but not until there were just 52 seconds left on the clock when the outcome was already determined.

Andy Murray withdraws from French Open to focus on Wimbledon

Andy Murray withdraws from French Open to focus on Wimbledon

Tom Brady will become analyst for Fox Sports upon retirement

Tom Brady will become analyst for Fox Sports upon retirement

R.A. Long senior Aaron Ofstun throws down a transition slam in the first quarter of the Jacks' 73-62 loss to Camas on Jan. 19.