Become a Member
Read Today's E-edition
Share This
1B Boys Basketball: Three Rivers Christian sputters down the stretch at Pe Ell
0 Comments
Share this
1 of 3 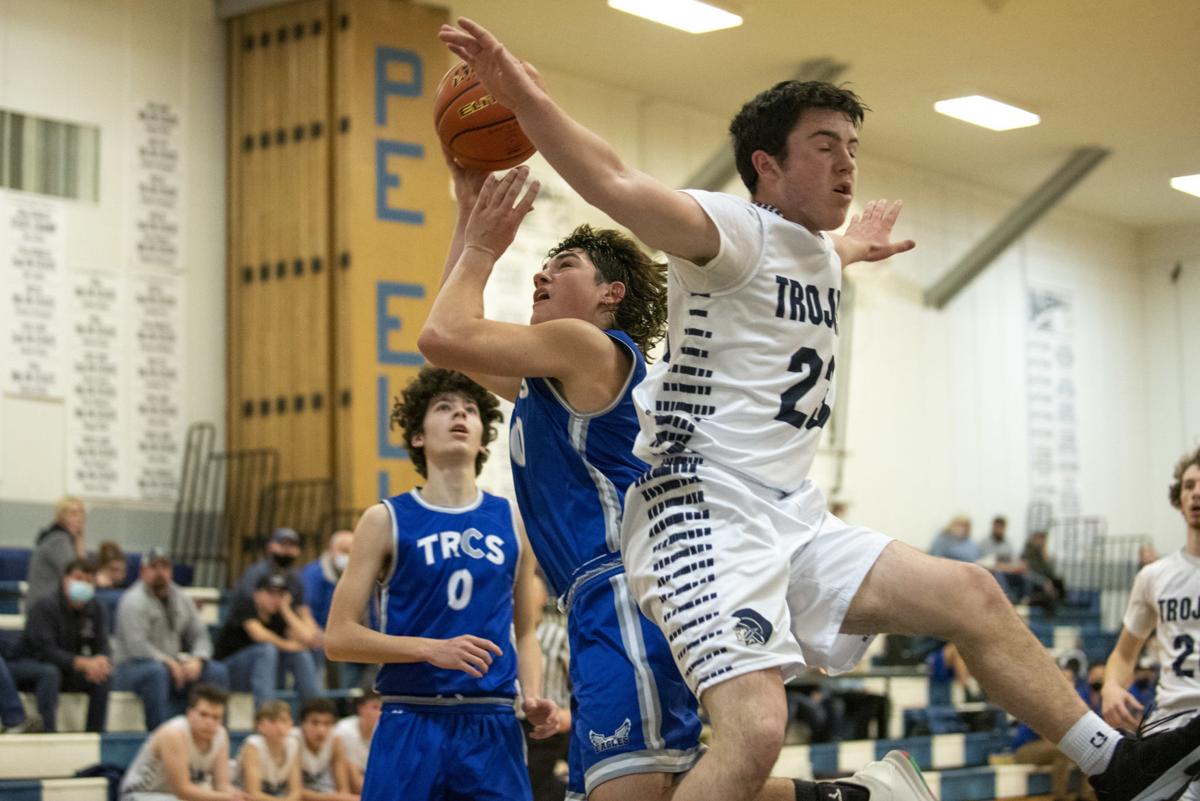 Three Rivers Christian's Justus Lafever (10) gets fouled on a layup attempt during a 1B boys basketball league road game on Thursday, Jan. 13, in Pe Ell. The Eagles lost to the hometown Trojans, 42-31. 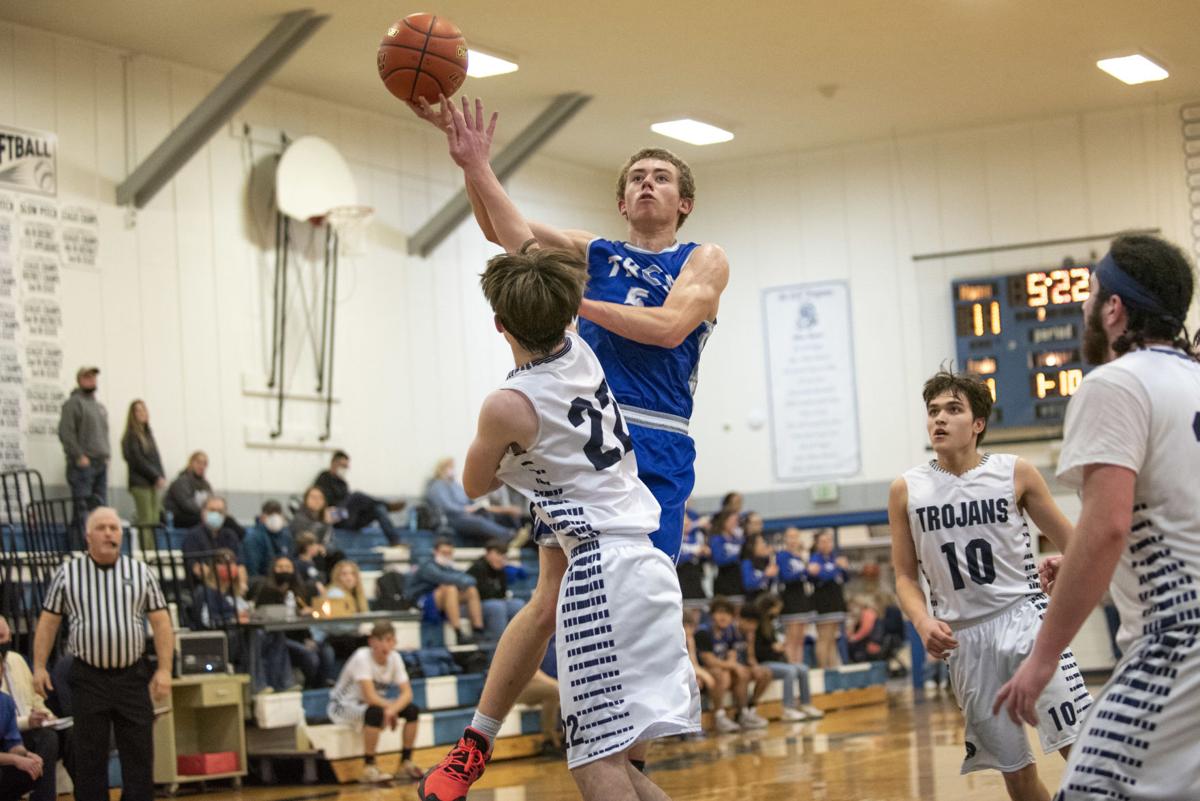 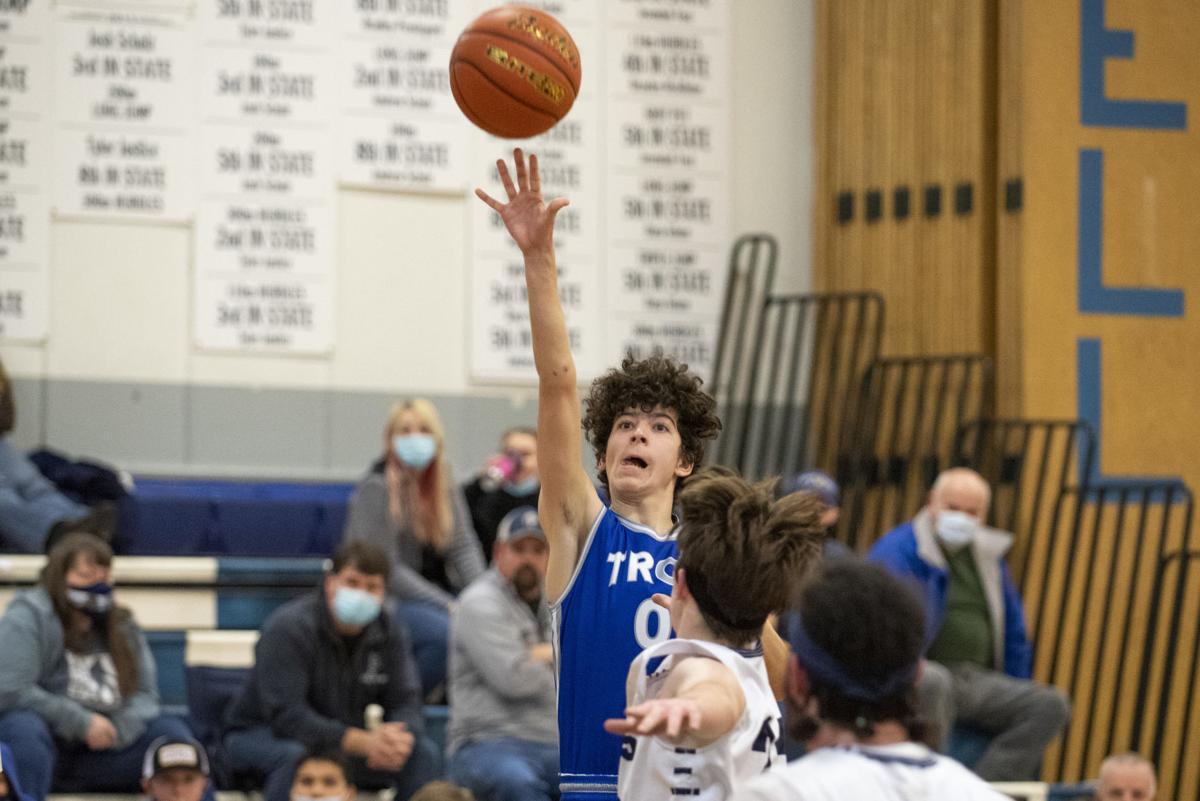 Gavin Dombrowsky of Three Rivers Christian tosses up a floater during a boys basketball league road game on Thursday, Jan. 13, in Pe Ell. Dombrowsky scored six points in a 41-32 loss.

PE ELL — The Three Rivers Christian defense came out and hounded Pe Ell on Thursday night in a Columbia Valley 1B League game, but its offense couldn’t find the bottom of the net on open looks as the Trojans took down the Eagles 42-31.

“It was just one of those games, that’s all I could say,” TRC coach Jim Murphy said. “I though the effort was there. The guys created steals and did what they needed to do to get it done on the defensive side.”

Despite the offensive struggles, the Eagles were able to take a 20-16 lead at halftime thanks to some new looks on the defensive end of the floor that they had been experimenting with over winter break.

“We’ve been experimenting with some three-quarter court traps and running a 1-2-2 and trapping some different areas of the court...tonight was really the first night we got to do it and they responded well,” Murphy said. “Seems like it really got our guys more into the game, more aggressive.”

The new schemes worked wonders by creating turnovers and upping the Eagles’ energy levels when the Trojans had the ball. But coming off a tough loss, the Eagles’ offense was out of sync from the jump.

“We played Tuesday night against Naselle and we gave it everything we had just to try to compete with those guys. They’re so tough,” Murphy said. “Coming off one day’s rest and going on a road road trip, we just couldn’t get the shots to drop.”

Murphy knew early on that someone would have to step up and hit the right shot at a crucial juncture.

“I told them at halftime that whoever can step up and make a big shot is going to win,” he said.

Unfortunately for TRC, it was Pe Ell that found the momentum on a fourth quarter three-pointer.

“When those games are really tight like that, it’s the team that knocks down the big three and they did, I’ve got to hand it to them,” Murphy said.

The Eagles were trailing by just four points, but after a turnover pushed the Trojans’ lead to six, Pe Ell knocked down a clutch three-pointer to extend it to nine and empty the wind from beneath the Eagles’ wings.

By the end of the fourth quarter TRC had managed just four points.

“I could kind of see the look on our guys and they just knew it wasn’t our night,” Murphy said of the momentum-shift.

With the Eagles having trouble stringing together makes both from range and on fast breaks, it might have been a different game if TRC got a couple more bounces in their favor.

“I think we would’ve won if literally one or two different shots would have dropped for us,” Murphy said. “I think it could have made just a world of difference for our confidence.”

Murphy went as far as to speculate that the new defensive game plan, although successful, might’ve had negative impacts in the scoring column.

“Looking back at it, playing a different style of game could’ve affected our shooting too,” he said. “Because we did expend a lot more energy on the defensive side.”

Walker Poyner and Chris Hastings did their best to break through the cold spell cast on the Eagles and totaled nine points each to lead TRC. Gavin Dombrowsky added six points in the loss.

Three Rivers Christian (3-6) will try to use this game as motivation as they need to pick up some key wins in the latter half of the year. If they want to get the most out of their season they’ll need to beat teams like Pe Ell that they’ve played close on the road when they get their shot at redemption.

“It’s a huge motivator,” Murphy said. “We have to get them at home, that’s for sure. They are a team we can beat. I was telling them tonight, there are still some games out there that are very winnable. We can still try to get in the postseason if we can knock some of these off.”

The Eagles will be back on the road at Mary M. Knight in Matlock on Saturday.

Last Friday at Hockinson, Kobe Parlin went with the Converses.

KALAMA — The 1,000-point mark is the benchmark milestone that most high school basketball players never come close to. It shows consistency, l…

2B Boys Basketball: Kalama grinds out win over Toledo

TOLEDO — It wasn’t the prettiest and it wasn’t the easiest. But the Kalama boys basketball team did just enough to bounce out to an early lead…

KELSO — Size gave it it’s best shot, but speed and quickness won the night as the Kelso boys basketball team fended off a challenge from 2A W.…

A matchup between top tier 2B teams lived up to its billing, if only for the first half, at LCC’s Martin Luther King Jr. Basketball Tribute on…

After three quarters of play Tuesday night the Monarchs were ready to unlace their ankle braces and let the dogs bark. The only problem was th…

Tumwater was the team coming an hour south to Cowlitz County, but once in Longview, Mark Morris was the one playing the Thunderbirds’ game, lo…

Three Rivers Christian's Justus Lafever (10) gets fouled on a layup attempt during a 1B boys basketball league road game on Thursday, Jan. 13, in Pe Ell. The Eagles lost to the hometown Trojans, 42-31.

Gavin Dombrowsky of Three Rivers Christian tosses up a floater during a boys basketball league road game on Thursday, Jan. 13, in Pe Ell. Dombrowsky scored six points in a 41-32 loss.