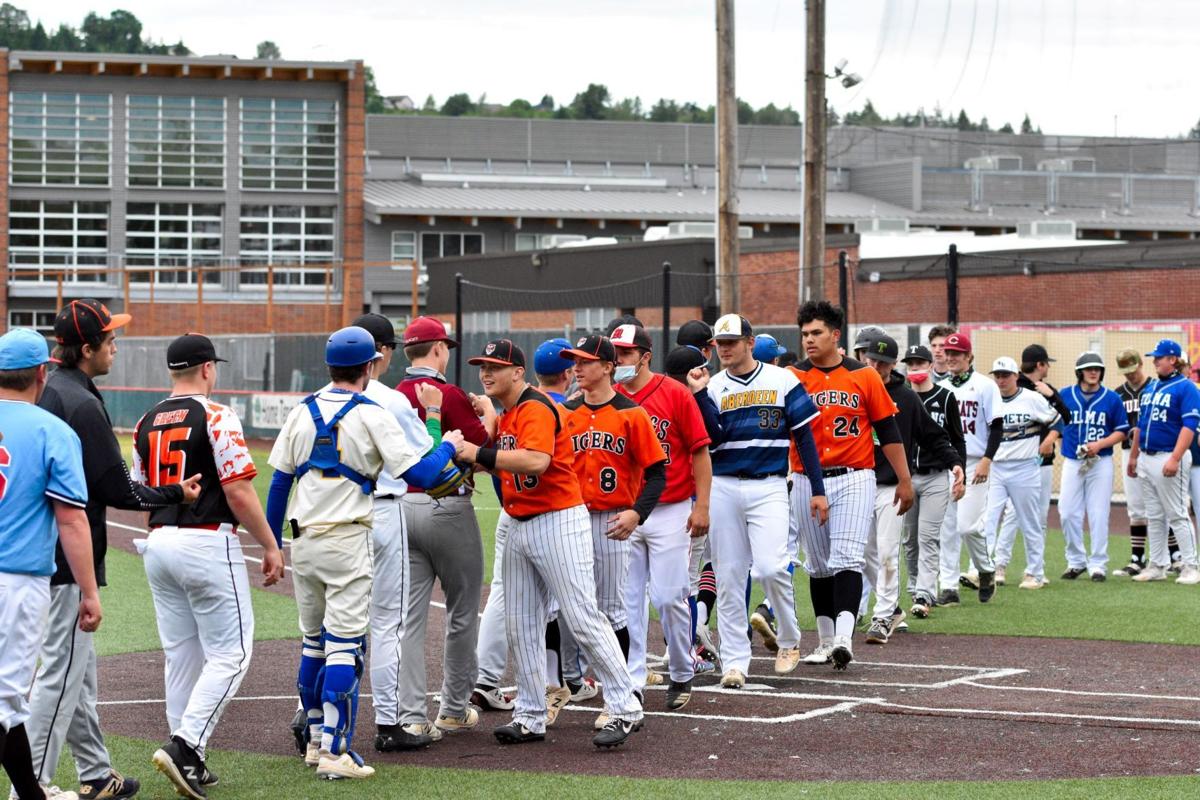 Baseball players from around the region greet one another following the Senior All-Star game at David Story Field on June 10. The annual event is a feeder event to the All-State game. 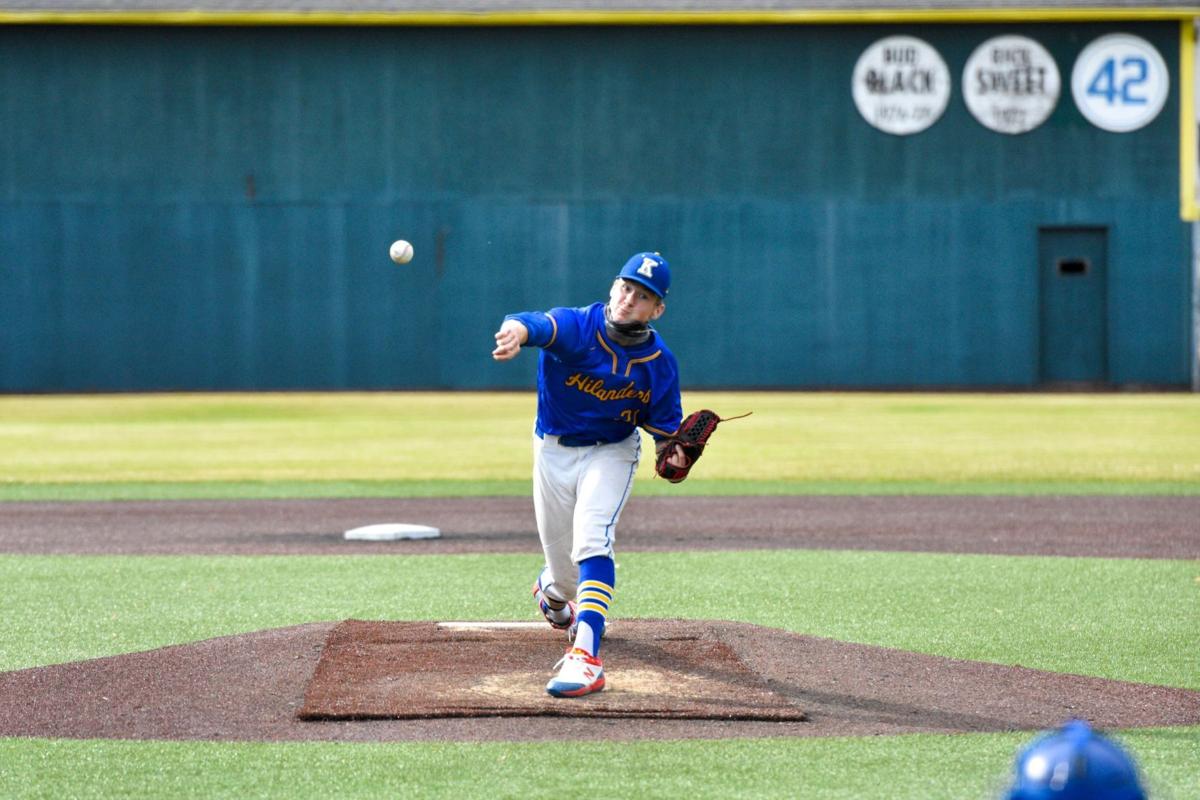 Kelso's Jase Schueller fires a pitch toward home plate during the Senior All-Star game at David Story Field on Thursday, June 10. Schueller impressed with his breaking ball and earned a nomination to the All-State Series. 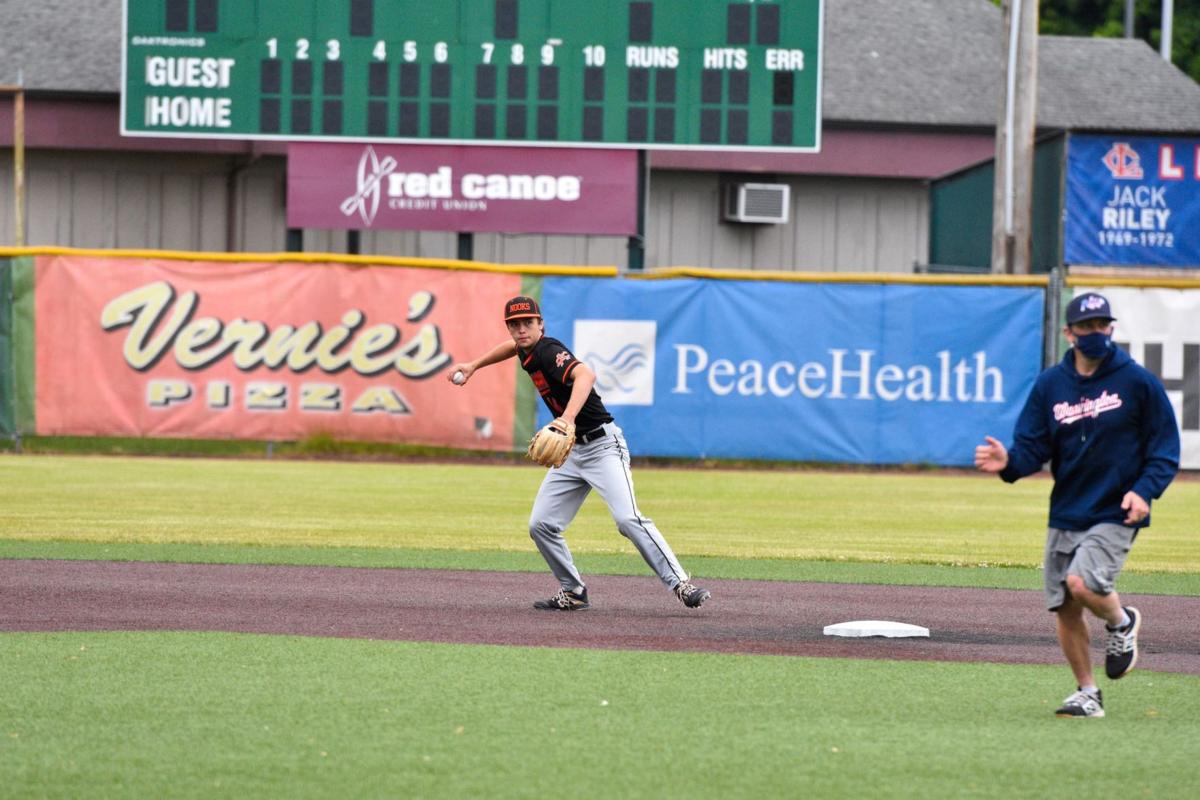 Kalama's Shayden Jones makes a play up at shortstop during the Senior All-Star game at David Story Field on Thursday, June 10. Jones was one of ten players nominated for the All-State Series.

The 43rd Annual Senior All-Star Game was meant to be played last Sunday in Centralia, but after some poor weather and scheduling conflicts, the game was moved to David Story Field in Longview and played on Thursday.

“I’d really like to thank the Black Bears and Kirc Roland at LCC because I think it was less than 48 hours notice and they were able to make it happen for us,” All-Star Game director Joe Bair said.

In total, there were three date changes to accommodate for graduations, weather and then a scheduling conflict at Wheeler Field in Centralia, where the game was initially scheduled to be played.

Even after the delay, a full cast area players were able to take the field. In the mix were some of the best players in Southwest Washington and others just enjoying the opportunity to step up to the plate one last time as high schoolers.

“At the end of the day, the coolest thing was that we had 32 kids that got to go out and wear their high school uniform one more time,” Bair said.

Not all players that were originally tabbed to play in the game were able to be there as high school basketball season was wrapping up for some of the players on the night of the game.

“Unfortunately, we had four 2B schools that had kids that were supposed to play in the game and they were playing in either the third and fourth place basketball game or the District Championship game, but at some point we just had to go for it,” Bair said.

As for the game itself, Bair said that there’s typically a strong offensive showing, but this year’s rendition was dominated by pitchers in a low-scoring, 4-1 game that was won by the side dubbed as the Americans coached by Naselle’s Randy Lindstrom.

“It was incredible how good the pitching was…I don’t know if that’s the way the season was in general, or maybe the pitcher just has the advantage because they know what they’re going to throw,” Bair said.

Bair also mentioned that it was a relatively clean game, despite the majority of players being unfamiliar with each other.

“It normally is a little more high scoring, but it was fun,” Bair said. “It was quick, fast-paced and for the most part there was good defense.”

The changing schedule and location also resulted in a last minute dash to find coaches to lead both teams. The Nationals were coached by Mark Morris assistant coaches Mitchell Margaris and Josh Johnson, while the Americans were helmed by Lindstrom and Aberdeen’s Dave Hinchen.

Margaris, who played in the All-Star game his senior year of high school, also noted the strong performances on the bump for both teams.

“The pitchers were extremely impressive, which was kind of a bummer for our hitters…and that was just a huge testament to how good our pitchers were,” he said.

One of those dominant pitchers was Kelso’s Jase Schueller. Schueller manned the mound for two scoreless innings and struck out five batters in the process.

In addition to the pitching, Bair was impressed with how well the players connected with each other without any practice time to get acquainted before the game.

“It’s crazy how they show up at 4:15 and play at 5:30 and there was camaraderie in the dugout,” Bair said. “They were just razzing each other, there were teammates facing teammates.”

Once the final out was recorded, players from both sides lingered on the field, took photos and enjoyed the afterglow of their final game, Bair said.

After the final stats had been tallied, Bair got together with the coaches, as well as the umpire, to help nominate 10 players for the All-State Series in Yakima on July 10 and 11.

“Not all 10 of them usually make it, but it’s an honor just to be selected,” Bair said.

Schueller was one of the ten nominees. He was chosen for his strong outing during the game. Schueller’s numbers during the regular season didn’t accurately capture his ability as he played most of the season after recovering from a burst appendix.

“Our umpire stayed around afterwards and put in his two cents and said he had the best pitch of the night with his curveball and the way that it broke,” Bair said of Schueller.

Another area player chosen was Kalama’s Shayden Jones. Jones’ success during the regular season was what caught the eye of Bair and the other coaches as he finished with a .452 batting average, scored 16 runs and drove in 24 RBIs at the plate on the season.

“He had a nice swing and I think he got on base a couple of times, but for him it was more the body of work over the course of the season,” Bair said. “His stats were very good and he plays sound shortstop.”

One of the biggest takeaways for Margaris, who had just found out on Tuesday that he would coach in the game, was the mix of players that participated.

“It was pretty impressive, there were a lot of different schools,” Margaris said. “It was cool to see how far and wide we kind of stretch to.”

Having seen the game as a player and now a coach, Margaris said it’s a unique opportunity for outgoing seniors.

“I think it’s always a cool situation when they get to meet kids from other schools, especially when you get those small school kids in,” he said.

All in all, Bair was happy to see the players take the field again after last year’s game was canceled due to the COVID-19 pandemic.

“It’s just nice to be able to get back to having the opportunity to play the game and send these seniors out…it was just a real feel good type of game,” Bair said.

3A Baseball: Parsons the next man up at Kelso

Kelso is bringing back one of its own to head its baseball program, naming Tyler Parsons as its new coach this past week.

Baseball players from around the region greet one another following the Senior All-Star game at David Story Field on June 10. The annual event is a feeder event to the All-State game.

Kelso's Jase Schueller fires a pitch toward home plate during the Senior All-Star game at David Story Field on Thursday, June 10. Schueller impressed with his breaking ball and earned a nomination to the All-State Series.

Kalama's Shayden Jones makes a play up at shortstop during the Senior All-Star game at David Story Field on Thursday, June 10. Jones was one of ten players nominated for the All-State Series.