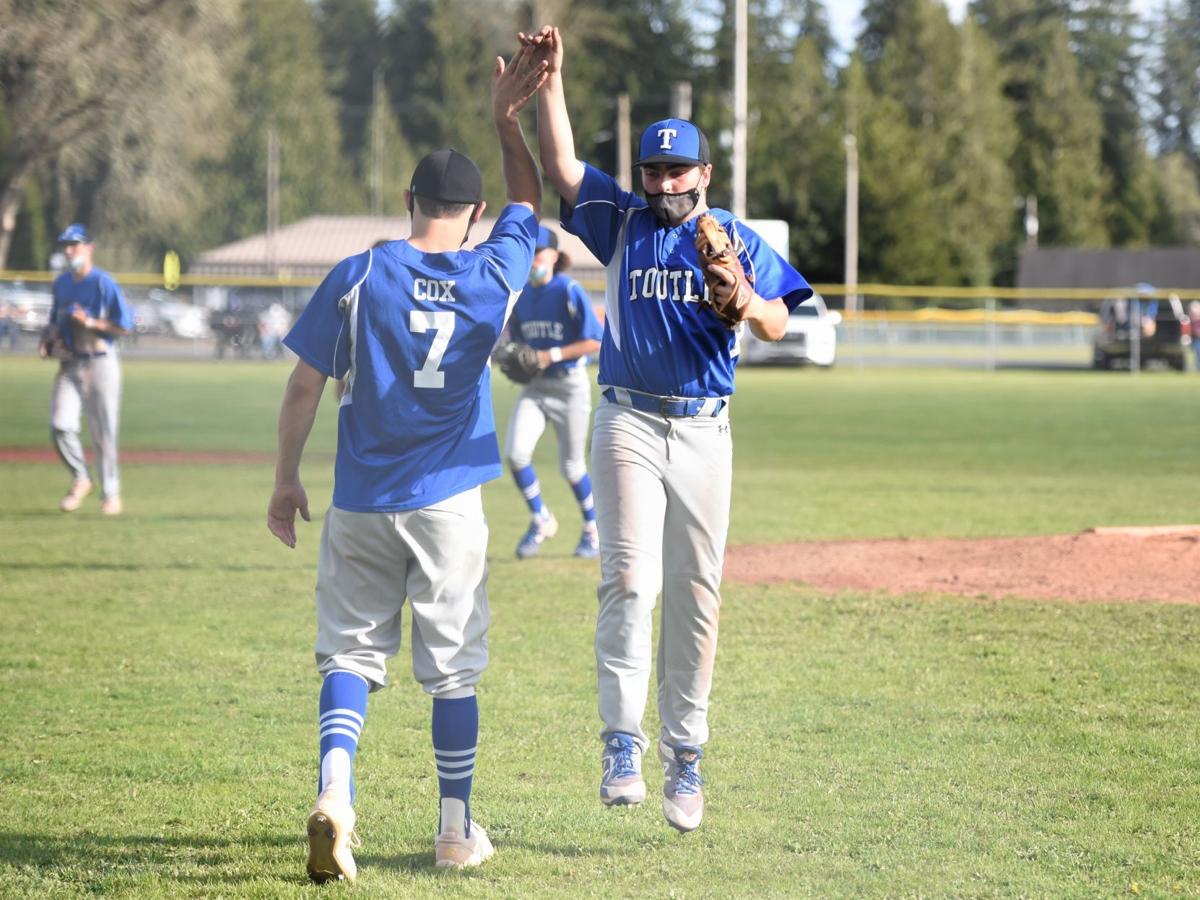 Camden Wheatley goes up for a high-five with Jackson Cox after slamming the door in the top of the seventh inning of Toutle Lake's 5-0 win over Wahkiakum in the 2B District IV quarterfinals on April 27. The Ducks came an out away from a no-hitter, but still finished with the shutout. 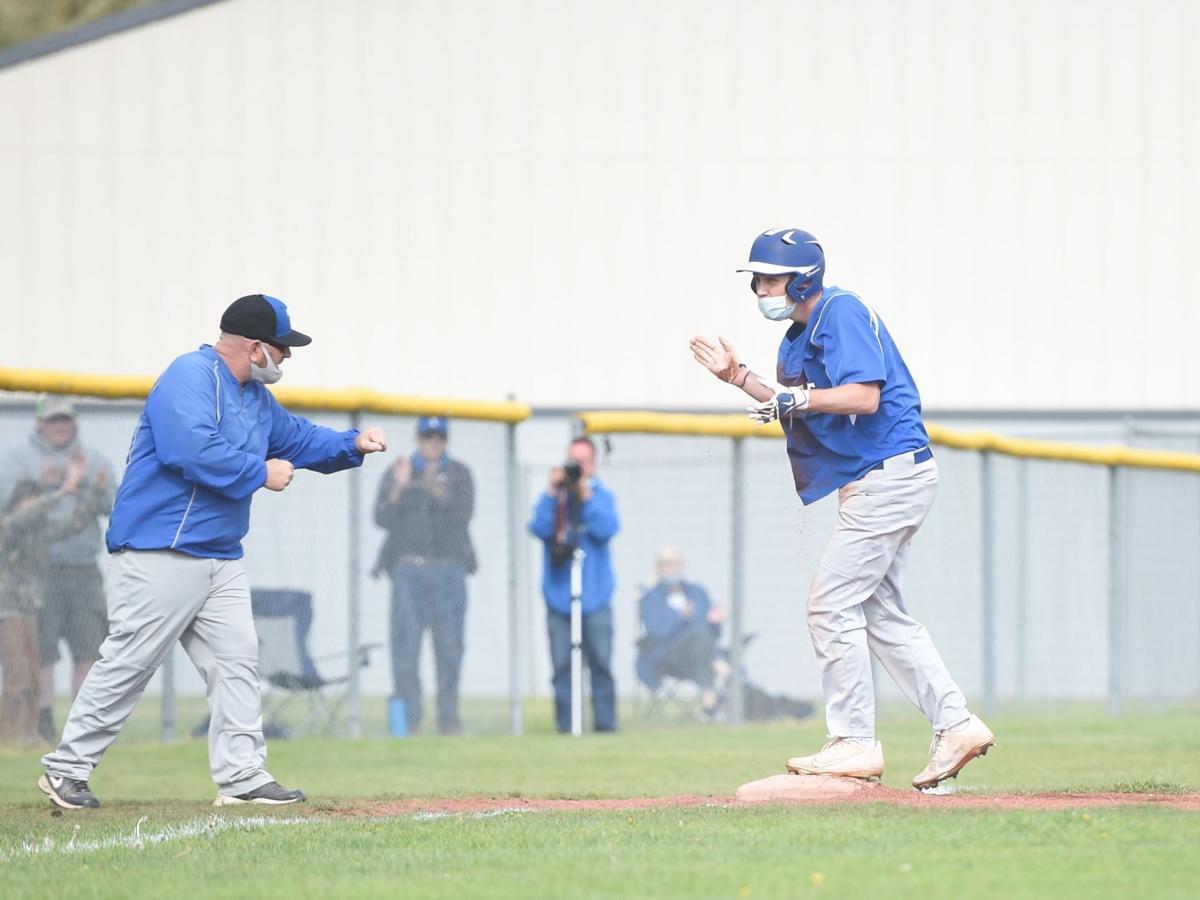 Toutle Lake third baseman Ryder Moss and coach Jerry Johnson celebrate Moss' 2-RBI triple in the bottom of the third inning of the Ducks' 5-0 win over Wahkiakum on Tuesday. 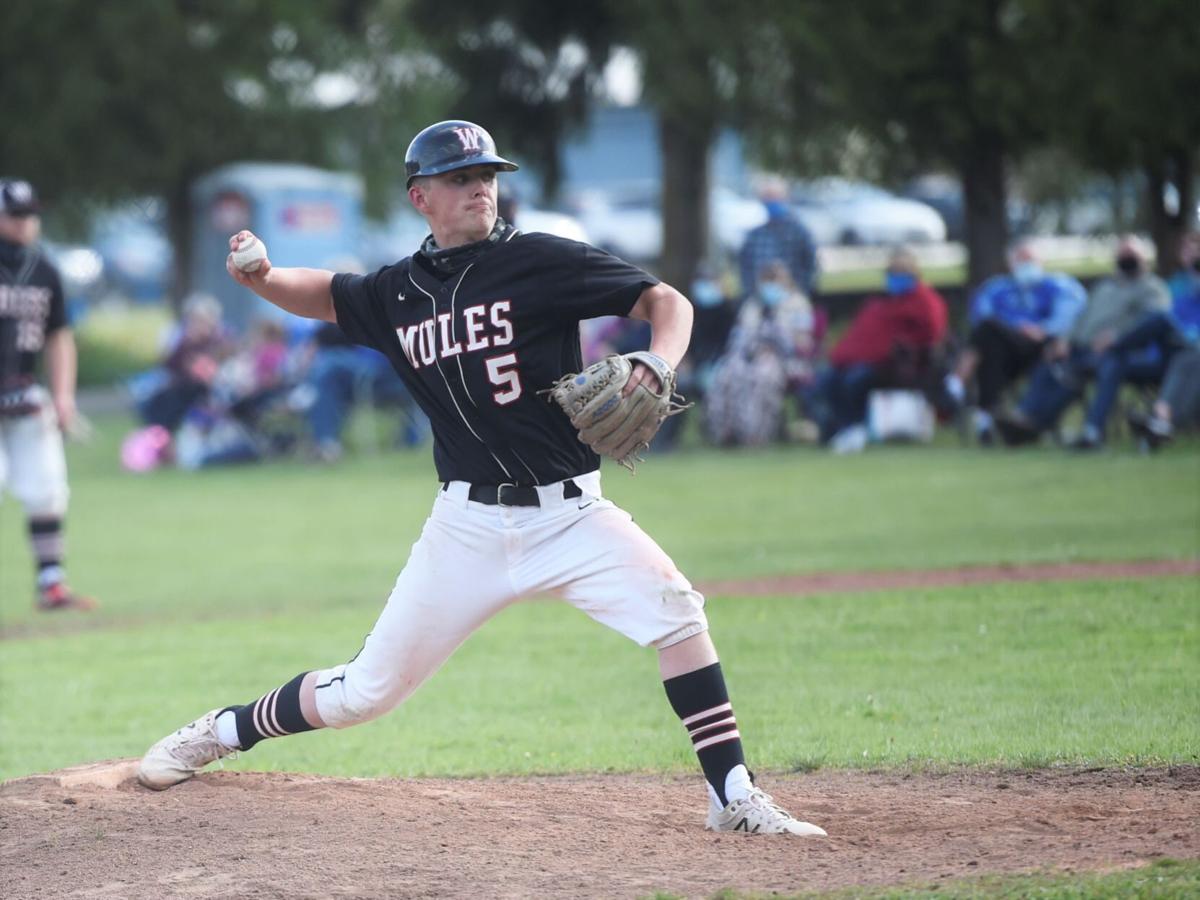 Wahkiakum's Beau Carlson fires off a curveball in the Mules' 5-0 loss at Toutle Lake on April 29. Carlson threw final three and two-thirds for the Mules, striking out four.

TOUTLE – Five weeks removed from opening day, the game is the same for Toutle Lake, no matter what the Ducks’ record may be, or what’s at stake each time they take the field.

“Knowing that we’re 14-0 or whatever, other teams don’t care,” Toutle Lake freshman Zach Swanson said. “We have to have that mentality going into the game that the other team doesn’t care, they have nothing to lose, we have nothing to lose. Just going in with a good mindset will help us.”

Still, as Kale Kimball’s throw from his second base spot hit Fisher Wassell’s mitt for the final out of Toutle Lake’s 5-0 win over Wahkiakum on Tuesday in the 2B District IV quarterfinals and then as the Ducks jogged off the field in victory, you could hear a common refrain from in front of the home dugout:

One game down, two to go.

It’s the same game as it has been, but there’s a definite finish line in sight.

“I try to emphasize that we have to take one game at a time, we don’t want to look past people,” said Toutle Lake coach Jerry Johnson. “But they’ve made it this far, so I know that they would love to be able to finish as strong as we started.”

Now, the Ducks will take two days off, before hosting Adna, Thursday, at 4 p.m. for a spot in the District finals.

It certainly looked like the standard Toutle Lake game on Tuesday – in fact, it was a near carbon copy of the Ducks’ win over the Mules just over one week ago, with Jackson Cox working around baserunners to pitch a gem and the Toutle Lake bats needing a full trip through the order to wake up before putting the runs they needed on the board.

The University of Oregon-bound hurler put runners on base in each of the first three innings on two errors – including one of his own – and a hit batter. He also let each one of those runners reach scoring position, but closed the door each inning before any damage could be done. From there on out, he was dominant, retiring 10 of the final 11 batters he faced, with his brother, Connor, throwing out the lone exception attempting to steal second base.

“It’s always fun listening to his 93, 95 mile-an-hour fastball winging in there. I always trust him, he’s one of the best to do it for Toutle,” Swanson said. “I know he’s going to have a great career, probably in the pros I hope.”

Cox finished with 11 strikeouts, giving him 24 in 12 total innings against Wahkiakum this season. It was also the third time this year that he didn’t allow a hit in a start that lasted four innings or more.

“He threw a very solid ballgame today, definitely,” Johnson said. “He should be proud of himself. I’m happy with what he did for us, now and all season. He’s gone out and been solid.”

Camden Wheatley came out of the bullpen for the seventh inning and would have put the capper on the combined no-hitter if it weren’t for another error in the field.

That gave Wahkiakum a gasp of new life, and Damion Curl took advantage of the extra at-bat, lacing a liner into right field for the Mules’ first knock of the game. Wheatley then bounced back and rolled another ground ball to end it.

“He’s definitely proven himself as being able to go in and get hitters out,” Johnson said.

Toutle Lake also put runners in scoring position in each other first two innings, but came up empty-handed. The Ducks needed somebody to give them that clutch hit, and with two on and one out in the third, Ryder Moss delivered with a shot to deep left field that kept carrying and carrying until it finally bounced off the wall for a 2-RBI triple.

“It’s nice to have Ryder back hitting in the lineup,” Johnson said. “He had a couple games where he was down. Jeez, that was a two-strike, oppo, into the fence for a triple.”

Moss came home during the next at-bat, when a back-pick attempt sailed way high and flew into left field.

The Ducks then got the rest of the breaks they needed in the next frame, with an error bringing one run home on a Wahkiakum error and Connor Cox driving in another on an RBI groundout to the right side.

“Once we got going, it clicked, and we started to hit a bit better,” Connor Cox said.

Then, it was just a matter of holding the hottest offense this side of the Cascades down. Wahkiakum finished its season averaging an even 12 runs per game against everyone except Toutle Lake, but came away with just two hits in 14 innings against the Ducks.

Still, Wahkiakum coach Marc Niemeyer was happy with the way his Mules stood in and battled in their at-bats against a future Division I pitcher throwing a 94 mile per hour heater and a slider with spin to burn.

And at the end of the road of this season, he had a moment to reflect on the core of seven seniors he’s coached since tee-ball.

“I’m unbelievably proud of my seniors, the way they play the game,” he said. “Every coach in the league has told them they’re a class act. They lead by the right examples. Everything they do, day in and day out, you couldn’t ask for better leadership.”

While Wahkiakum will quickly move onto basketball and wrestling, Toutle Lake still has its eyes set on a District title—and perfection.

The way it broke down for the Ducks on Tuesday, things again went pretty much perfectly. Johnson still has Swanson completely fresh for Friday start – he didn’t even bother playing coy about that fact after the game. Both Wheatley and Connor Cox, his two main options out of the bullpen, will also be available.

And with Jackson Cox getting through his six innings on 86 pitches, he would feasibly be available for a championship game appearance on Saturday.

“The cards just fell right for us,” Johnson said.

First, though, is the matter of Adna. As was repeated after the win Tuesday, it’s one down, two to go for Toutle Lake to secure an undefeated season and a trophy. Next up, they have to make it two down, one to go.

“We’ve got one game, focus on the next one Friday,” Connor Cox said. “Hopefully we can win that one and move on. That’s the goal.”

Another great day for favorites in Major League Baseball

Another great day for favorites in Major League Baseball

3A Baseball: D'Aboy steps down as Kelso head coach

Kelso will be looking for a new head baseball coach in the coming weeks, after longtime coach Tom D’Aboy announced his resignation last Friday.

The 43rd Annual Senior All-Star Game was meant to be played last Sunday in Centralia, but after some poor weather and scheduling conflicts, th…

KELSO — The Kelso baseball team’s season came to end Wednesday, losing in the first round of the 3A/4A Greater St. Helens League tournament 9-…

A select group of area baseball players will get one more shot to take the diamond in their high school uniforms, potentially for the final ti…

KELSO — The Kelso team had one early comeback in it, but Prairie made sure the Hilanders didn’t have two, putting up two huge innings to win 1…

CAMAS — The Kelso baseball team nipped its short losing skid before it could turn into a real streak, hammering out 14 runs in a six-inning wi…

Camden Wheatley goes up for a high-five with Jackson Cox after slamming the door in the top of the seventh inning of Toutle Lake's 5-0 win over Wahkiakum in the 2B District IV quarterfinals on April 27. The Ducks came an out away from a no-hitter, but still finished with the shutout.

Toutle Lake third baseman Ryder Moss and coach Jerry Johnson celebrate Moss' 2-RBI triple in the bottom of the third inning of the Ducks' 5-0 win over Wahkiakum on Tuesday.

Wahkiakum's Beau Carlson fires off a curveball in the Mules' 5-0 loss at Toutle Lake on April 29. Carlson threw final three and two-thirds for the Mules, striking out four.