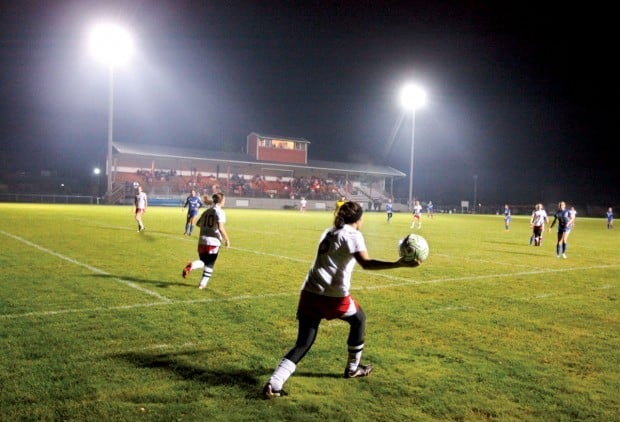 Castle Rock soccer player Kacey Bourgoyne sets to throw the ball in during the team's final home game against Ridgefield on Thursday under the lights of the football stadium. 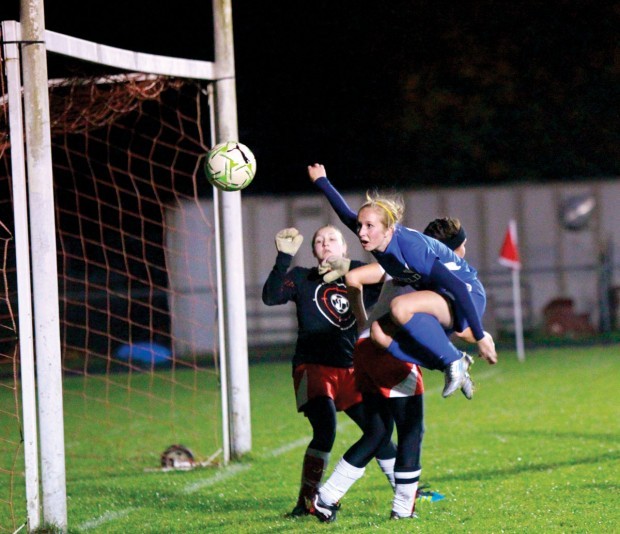 CASTLE ROCK — Several Castle Rock girls soccer players and their parents have filed a formal complaint with the school district, claiming that barring the team from playing in the lighted stadium the football team uses is discrimination.

The field dispute led to drastically shortened playing times for some soccer games this season, which parents and players say isn't fair when they pay the same fees and practice just as hard as every other athlete.

"Our girls are just not getting the same opportunities to use the sports complex like the boys," said parent Larry Hensley. "They deserve a fair shake and the ability to play a full game."

Parents say the situation has gradually worsened in the past few years. As a result they've contacted an expert on Title IX, a federal law that requires equal access and treatment of female and male athletes at public schools.

"I'm still gathering evidence, but from what I'm hearing it looks like there are facility issues," said Herb Dempsey, a Graham, Wash., retiree who has become a sports gender equity guru after filing more than a thousand complaints across the country. "And if the girls junior varsity soccer games are getting their quarters cut and the boys junior varsity football players aren't, then we've got a problem."

School officials say they're still gathering evidence to respond to the complaint before any other steps can be taken. Officials said it would cost more money to play soccer games in the stadium and also causes schedule conflicts with other events. But they added they know it's become a contentious matter.

"There are a lot of concerns and a lot of upset people," Superintendent Susan Barker said Monday. "And that's not good for anybody."

Parents said they have several concerns about how soccer is treated, but the big issue is use of the stadium.

And, the soccer field doesn't have lights, which is a problem late in the fall season.

This year, a varsity soccer game had to be called due to darkness. After that, district officials put varsity games ahead of JV games. That lead to several shortened JV games - sometimes just 32 minutes instead of the regular 80 minutes, according to parents and coaches.

"My biggest concern is that the girls get equal playing time compared to every other sport," said JV coach Polly Hubbard. (Hubbard and varsity coach Richard Schlecht are not part of the formal complaint letter signed by 47 parents and players and turned into the district last week). "These girls paid their participation fees just as well as everybody else, and it's not fair."

"As a coach it's important that the girls get the playing time and experience from full games," Schlecht added. "That's how they improve."

Starting the varsity games at 4 p.m. also made it difficult for some players coming back from college Running Start classes and for parents to make the games, Schlecht said.

Even more important, though, parents and coaches said the varsity and JV teams felt demoralized after games were cut due to darkness while the football stadium sat empty. Parents said their games don't conflict with high school football practices and their games are on different days, so the stadium could be available for soccer games.

"It feels like our school doesn't care about us and we're treated as if we don't matter," said junior forward Nesha Hyde.

District officials point out that the last two girls soccer games - including one on senior night - were played in the football stadium this year. Parents say that just proves it really isn't a problem to play soccer in the stadium.

In years past, as many as four of the eight home soccer games were played under the lights, but the number has decreased recently. Barker said that's at least partially due to scheduling conflicts. Parents say they've been told the stadium is for football, period.

The boys soccer team doesn't get to use the stadium either, but the parents say the boys games aren't called due to darkness in the spring. They'd also support both soccer teams using the premiere field.

Barker said it costs the district money for maintenance crews to re-stripe the field and move soccer goals between soccer and football games.

Parents and the coaches said other districts in their league have both teams share a field, but Barker said that not all do.

Barker said allowing soccer games in the stadium also would mean the middle school football team would have no place to play because there would be schedule conflicts with the soccer games.

"I'd expect to then hear from the middle school football parents," she said.

The soccer parents say priority should be given to the high school varsity and junior varsity players over middle school. Barker said that still needs to be explored.

"That is one resolution, but I certainly haven't found middle ground to resolve any of this," she said.

Some parents, including Hensley, would like to see all the soccer games played in the stadium. He thinks it would save money only maintaining one field and believes the concession sales available at the stadium could help add to the district coffers. The seats for spectators would be nicer and the football field is accessible to people in wheelchairs, unlike the soccer field, he said.

Others, like Fowler, just want the stadium available as an option late in the season so games don't to have to be called early.

Dempsey said he's warned the parents that while he hopes this can be resolved on the local level, a full-blown Title IX complaint could take up to 18 months. The first step was the complaint letter to the district, which Barker has 30 days to respond to. That decision can then be appealed to the school board and then the state and federal officials if necessary, Dempsey said. There's a lot of work and investigation and document requests along the way, he said.

The parents, though, say they're committed to seeing the process through, no matter how long it takes.

"It's not fair to the girls who bust their butts in practice," Fowler said of the current situation. "You don't see anyone stopping a football game."

Equal opportunity access must be enforced in Castle Rock

School administrators in Castle Rock say they're in the process of gathering evidence on the question of whether or not they're violating Title IX of the Federal Education Amendments of 1972 by giving preferential treatment to football teams.

CASTLE ROCK — Parents of the girls soccer team are cautiously optimistic the squad will get to play in the lighted football stadium, but they'…

Castle Rock High School's girls soccer team will play at least some games in the sports stadium next fall, giving parents and team members a v…

Castle Rock soccer player Kacey Bourgoyne sets to throw the ball in during the team's final home game against Ridgefield on Thursday under the lights of the football stadium.