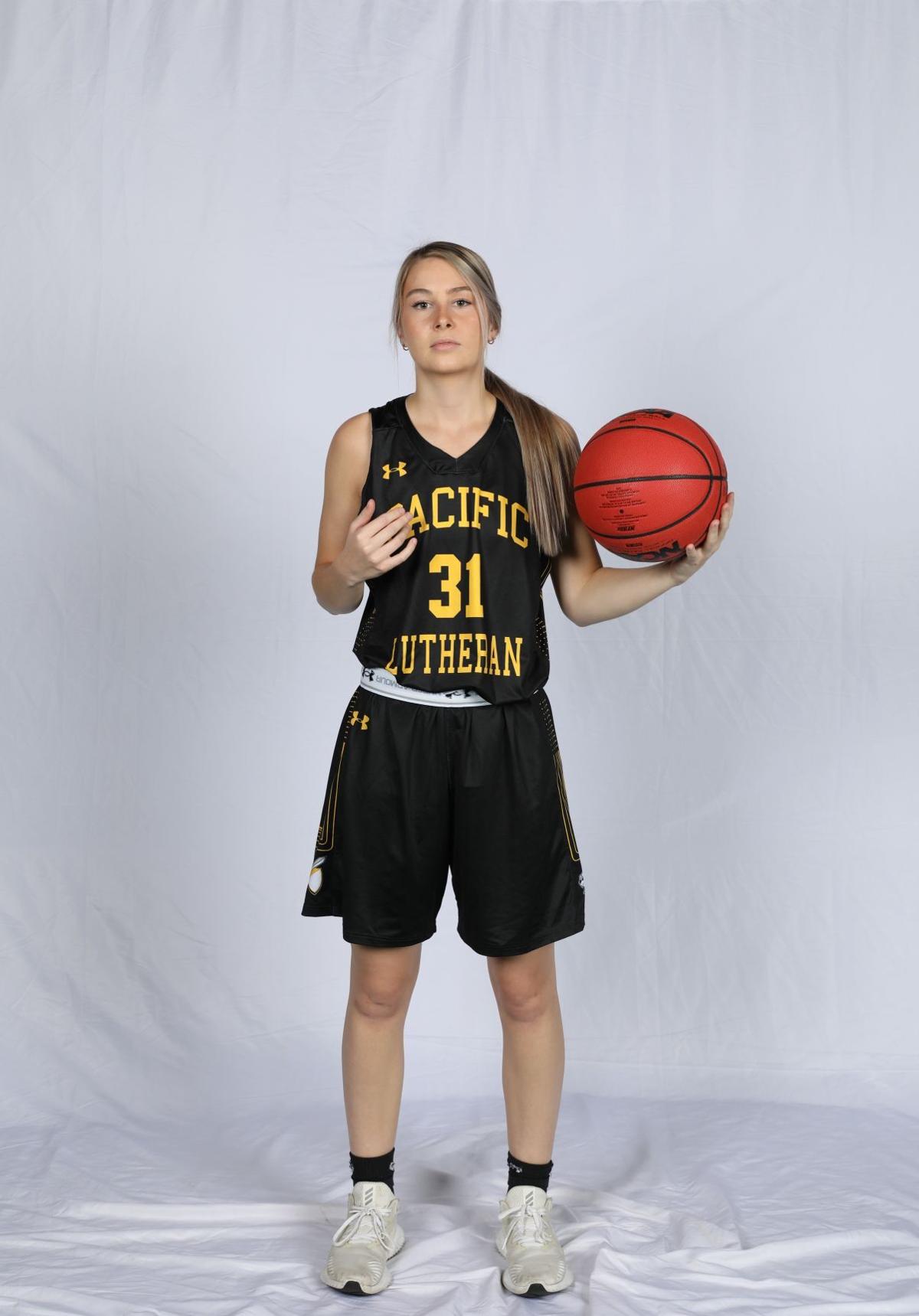 Madison Mosier, a former standout for Mark Morris and Lower Columbia College, poses for a photo during the preseason media dat at Pacific Lutheran University. In her PLU debut during an exhibition game against Seattle Pacific on Monday she scored two points, notched two steals, a rebound and an assist. 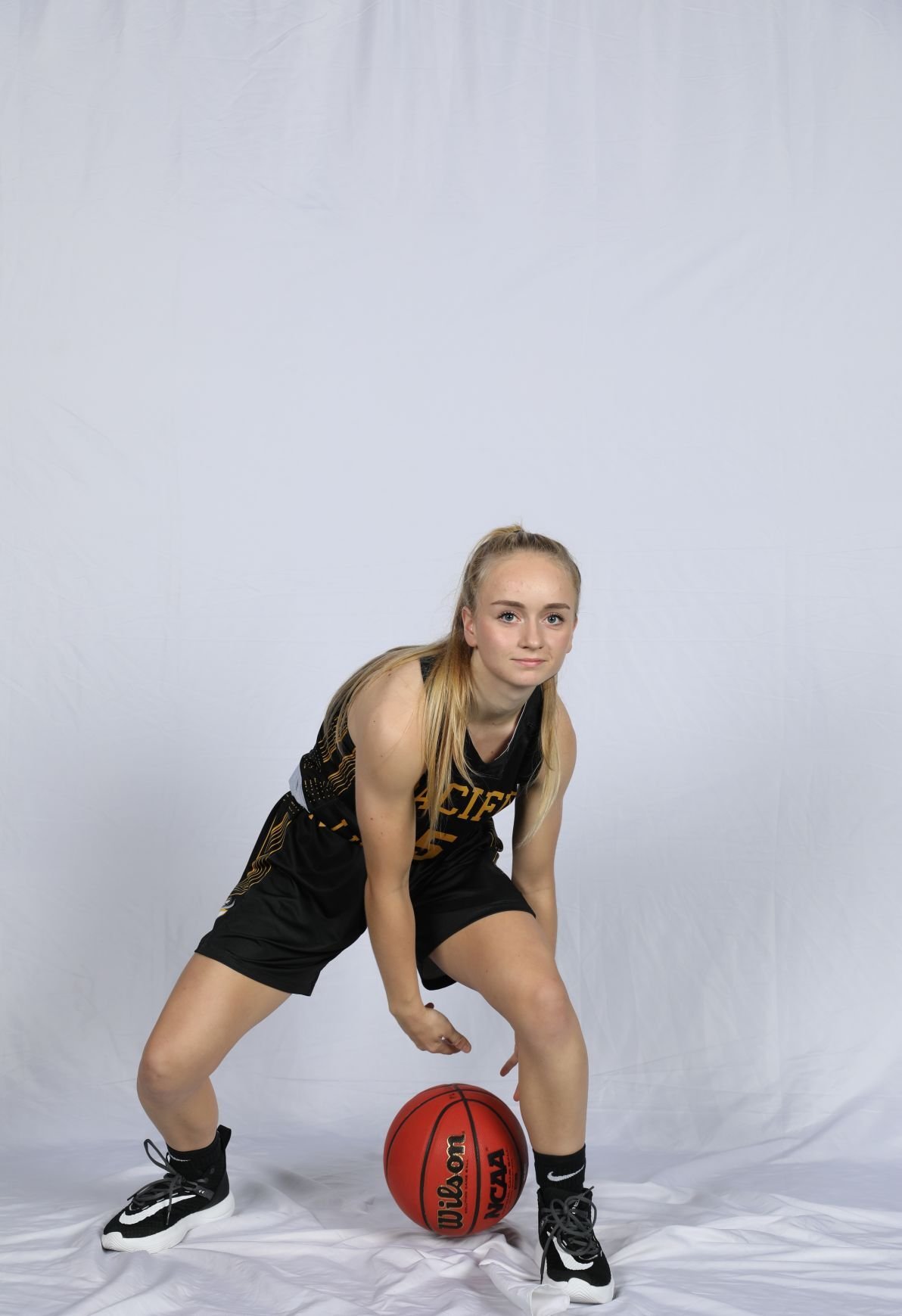 Alexis Kleven, a graduate of Kelso High School, shows off her handles during a photoshoot for the Pacific Lutheran University media guide. PLU opened its season with an exhibition game against Seattle Pacific on Monday, losing 56-51.

A week and a half into the new year, two familiar faces started off their collegiate careers, as the Pacific Lutheran women’s basketball team — featuring Mark Morris and LCC alum Madison Mosier and Kelso’s Alexis Kleven — went to Seattle for an exhibition against Seattle Pacific, losing 56-51.

Mosier came off the bench for the Lutes and put in 19 minutes, scoring two points and adding a pair of steals, a rebound, and an assist. Kleven did not appear in the game.

Both teams were seeing their first action in over 300 days, and it looked like it early, with SPU and PLU combining for eight turnovers and just six points in the first four minutes. Once the sides started to find their offense, it kicked off a back-and-forth first half.

Neither team got out to a lead larger than five points in the first half, with SPU taking a four-point advantage into halftime. That lead stretched to as many as nine points in the third quarter, but never got into double-digits as the Division III Lutes stuck around with the Division II Falcons on the road.

Hector didn’t get to have his scheduled homecoming Sunday, as the Hornets’ two-game home-and-home series against Portland State was axed due to positive COVID-19 tests in the Sacramento State program.

Should the Hornets get their cases under control, he’ll get to try to add to what’s been a productive first season at the Division I level thus far. In five games, he’s played at least 15 minutes four times. In those four matchups, he’s averaging 8.8 points and 8.3 rebounds per game.

The Oregon and Washington members of the Cascade Collegiate Conference pulled out of play in December when the conference pushed its start back to March 1.

That left the two CCC schools in Idaho — Lewis-Clark State and the College of Idaho — to cobble together a schedule as independents in the interim. Saturday, the two schools started their new slates against each other, and what followed was a one-sided 75-39 drubbing by the Warriors.

Souvenir put up nine points in 21 minutes on a trio of three-pointers, led the Warriors and tied a career high with eight offensive rebounds, and added three assists and a pair of steals. Lewis-Clark State was supposed to play Whitworth on Tuesday, but that game was canceled when the Pirates had to pause their season due to COVID-19 positive tests.

Through seven games in her senior season, Souvenir is averaging 8.6 points and 4.3 rebounds, and leads the team with 29 assists.

The Vikings found their footing with a two-game sweep of Sacramento State, winning 66-64 in overtime on Thursday and 74-64 on Saturday.

Hansen led PSU with 21 points and nine rebounds in the first win, then became more a distributor in the second with a team-high five assists to go along with seven points.

EWU stretched its winning streak to four games with a sweep of Weber State in Cheney over the weekend. Schaplow came off the bench for two minutes in the first game — a 78-57 win — and got in the scoring column with a three-pointer in 71-59 Saturday matinee.

She’s currently 5-of-11 on the season from beyond the arc.

The Eagles were supposed to take on Southern Utah this weekend, but those games have been canceled due to COVID-19 issues in the EWU program.

Speaking of Southern Utah, the Thunderbirds already found a way to rebound from the canceled series against EWU, setting up a pair of home games against Texas Rio Grande Valley.

Daugherty, who led the NWAC in assists as a sophomore at LCC last season and added 9.9 points per game, has started all seven contests for the Thunderbirds thus far. She’s first on the team with 18 assists, and second at 11.4 points per game.

Which men's college basketball programs should we keep an eye out for next season?

Which men's college basketball programs should we keep an eye out for next season?

Dancing on the big stage: Rem Bakamus is the shoelace that ties national championship teams together

Editor’s Note: This story ran online prior to the NCAA men’s basketball championship game Monday night. The result of that game was not known …

2B Baseball: Pirates use Gates to stop Toledo

TOLEDO — Levi Gates gave Toledo all they could handle, Monday, launching a homerun and striking out 15 batters in a complete game effort on th…

Lumberjacks get first win, go out with a whimper against Fort Vancouver

The R.A. Long baseball team waited for the last possible moment to find their bats, but the Jacks broke out the wood in the nick of time to be…

VANCOUVER — The Castle Rock track and field teams had a busy week, hosting one 1A TriCo meet against La Center and Seton Catholic on March 26,…

WARRENTON, Ore. — The Tigers volleyball team is headed to State for the first time since 2003 and all it took to get there was a pair of rivet…

ONALASKA — Tommy Brandenburg, apparently, was a little ticked off after his last start.

CASTLE ROCK — The Rockets picked up their first win of the season Friday but couldn’t quite make it two. They ran out of daylight against Gold…

WOODLAND — The springtime rendition of the Beaver Cup was a muted affair Thursday after Mark Morris and R.A. Long backed out of the competitio…

SOUTH BEND — The Wahkiakum baseball team continued its explosive start to the 2021 season, once again piling on the runs in a 23-2 win Wednesd…

Madison Mosier, a former standout for Mark Morris and Lower Columbia College, poses for a photo during the preseason media dat at Pacific Lutheran University. In her PLU debut during an exhibition game against Seattle Pacific on Monday she scored two points, notched two steals, a rebound and an assist.

Alexis Kleven, a graduate of Kelso High School, shows off her handles during a photoshoot for the Pacific Lutheran University media guide. PLU opened its season with an exhibition game against Seattle Pacific on Monday, losing 56-51.