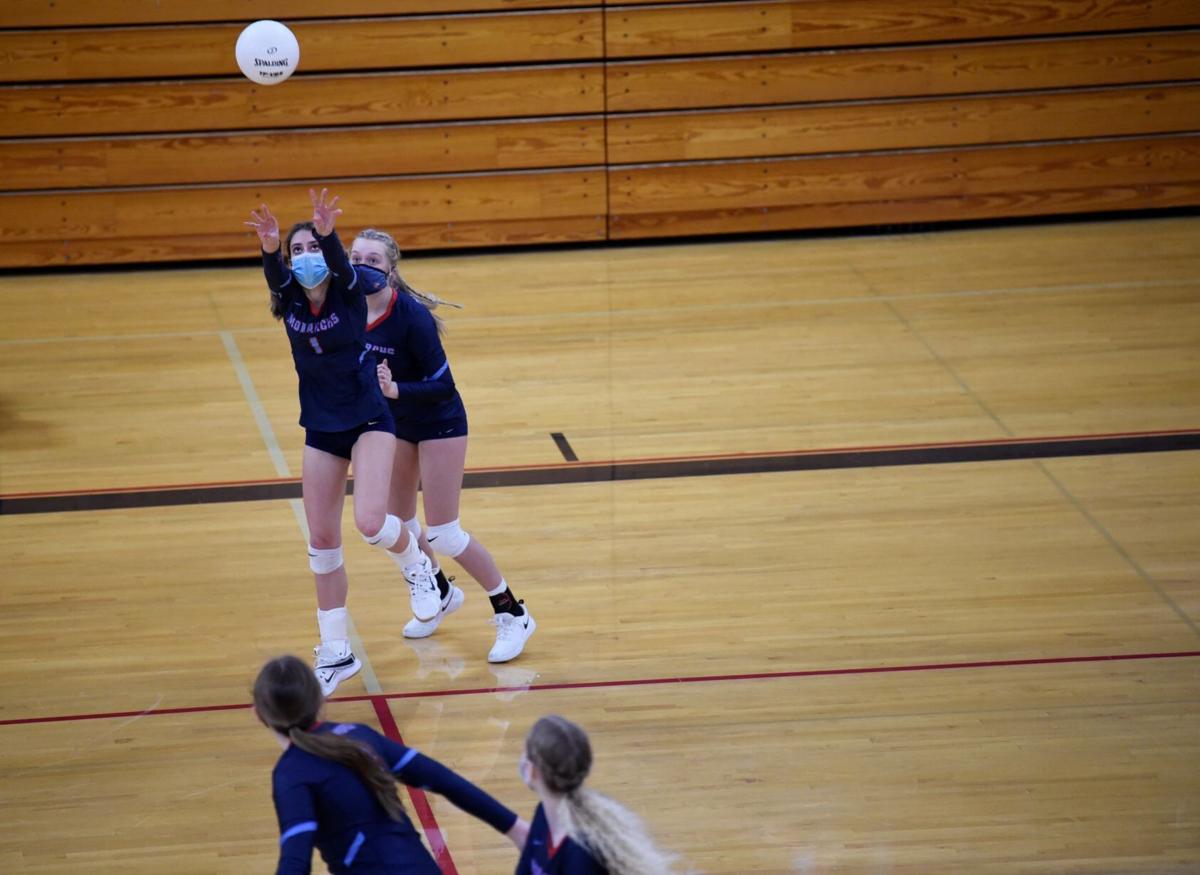 Mark Morris' Kendall Blondin sets a ball toward the net as Isabella Merzoian looks on during a game earlier this season at the Lumberdome. On Thursday, the Monarchs defeated Washougal in four sets. 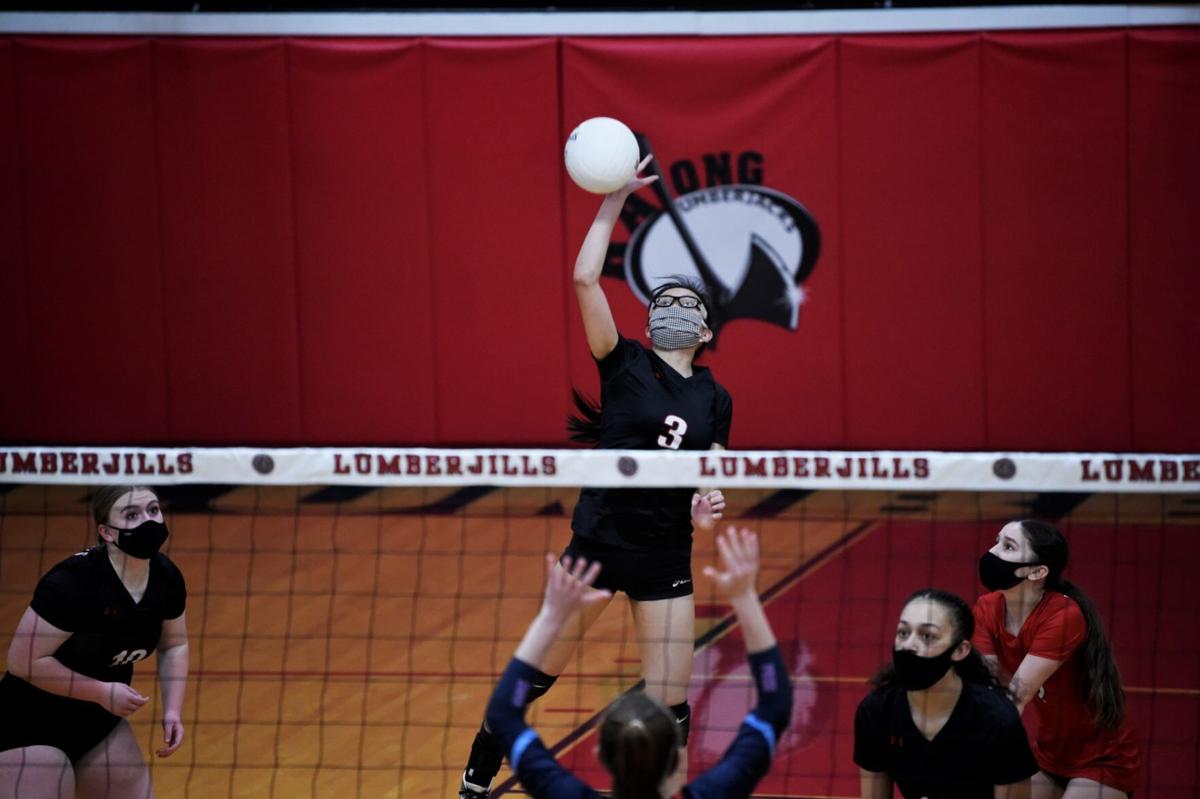 Y Ta puts some heat on the ball during a match against Mark Morris on Feb. 18. On Thursday, March 4, Ta tallied 14 kills and seven digs as the Lumberjills defeated Fort Vancouver in four sets.

Junior hitter Y Ta finished with the team lead in kills with 14, and added seven digs. Coach Whitney Nailon was also impressed with freshman Kamia Tootoosis-Didier, who racked up 13 kills.

“She’s just a freshman and she just swings so hard, it’s incredible,” Nailon said. “It’s exciting that she’s able to do that at such a young age.”

Despite the good numbers at the end, the Lumberjills came out at half-speed in the first set. Instead of riding any momentum off their five-set thriller at Washougal on Tuesday, the Jills stumbled their way to an early loss out of the gate.

“We started off so slow,” Nailon said. “It’s so easy to play at the level of the team that you’re playing, and that’s definitely what happened. We had a little tough-love talk after the first set, and they came back and executed the things we talked about.”

R.A. Long did end up figuring it out in the final three sets, and for the first time since 2014, the Lumberjills have back-to-back 2A GSHL wins.

“It was a good team win for us,” Nailon said. “And it feels good to win again.”

That excitement was echoed by R.A. Long athletic director DeWayne McCabe who took to social media following the Lumberjillls’ win earlier in the week and started a hashtag for the team; #Lumberkills.

Setter Miranda Berquist logged 41 assists over the four sets against the Trappers, and Meredith Chesley helped keep the Jills in system with 85% passing on serve-receive.

R.A. Long (2-4) is scheduled to host Ridgefield on Monday at the Lumberdome.

“Monday is going to be a tough one,” Nailon said. “But we are ready to play some defense.”

Monarchs down Panthers in four

Kendall Blondin finished with 33 assists, dishing it out to the various Mark Morris hitters in order to keep Washougal off balance.

“Kendall did a great job of spreading the sets around and we had many hitters step up tonight,” Hewitt said.

At the back, Madi Noel racked up 24 digs to lead the Mark Morris defense.

Despite winning the first set by a wide margin, the Monarchs lagged behind in the second, and then had to find their rhythm a second time going forward in the third and fourth sets.

“Our energy wasn’t the best and we really struggled to get ourselves going,” Hewitt said. “However, we fought through it and finished strong.”

Mark Morris is scheduled to host Fort Vancouver on March 9.

WOODLAND — The Beavers put together a balanced effort Thursday night as they hit their way past Hudson’s Bay with scores of 25-11, 25-16, 25-21 in 2A Greater St. Helens League volleyball action.

Emma Swett just missed a triple-double for the home team with 10 kills, 10 assists and nine digs. Liz Hurn added 17 digs and six aces in the win.

Woodland (6-1) is scheduled to play at Columbia River on Tuesday.

Rockets blinded by the Knights

VANCOUVER — King’s Way Christian defeated the Rockets in four sets Thursday, but to hear Castle Rock coach Jeana Bayes tell it, her team actually beat themselves. No matter how you slice it, it was the Knights that earned 1A TriCo League volleyball bragging rights by postings scores of 25-23, 23-25, 25-16 and 25-20.

“This was not a solid match for us as a team as a whole,” Bayes said.

The Rockets hung around for the first two sets, trading twin wins with the hosts, but they couldn’t sustain that trajectory as King’s Way seized the momentum in the third set and never gave it back.

“Senior captain, Ranae Holter, worked incredibly hard tonight on defense as well as moving the ball around to her hitters,” Bayes said. “I was so proud of how she stepped up and continued to rally her team together.”

Castle Rock (3-2) is scheduled to play at Seton Catholic on Tuesday.

“It was back-and-forth, back-and-forth,” said first-year coach Shanda Wagner. “These girls are going to give me a stroke, I swear. It was a battle the whole way.”

After taking the first set by what ended up being the widest margin of victory all night, the Columbians dropped the second, won a battle in the third, and had a chance to win it in the fourth, but couldn’t.

But if the Bulldogs had any momentum from their fourth-set win, it didn’t last long. The Columbians went back to throwing haymakers in the fifth, with the two sides going back and forth for every point — and eventually into extra points — with Rainier coming out on top.

“Those kids have ice in their veins,” Wagner said. “They’re probably the most mentally tough group I’ve ever gotten right off the bat, so that’s refreshing and awesome to have to work with.”

Rainier (2-0) is scheduled to play at Vernonia next Wednesday.

Tigers bounce back to beat Seagulls

SEASIDE, Ore. — After opening its season at home, Clatskanie went out to the Oregon coast for its first road trip of the 2021 season, and coach Amanda Baker said the hour-and-10-minute journey to Seaside might have had an adverse effect on her players.

“It took us a little bit to wake up from the car ride, I think,” Baker said. “We were a little slow the first game.”

Olivia Sprague led Clatskanie at the service line with six aces, Kylie Thomas led on defense with 15 digs, and Shelby Blodgett led at the net with 13 kills and four blocks.

“The whole team, we played much better defense than Tuesday,” Baker said.

The only issue for the Tigers was that sleepy eyed start. After dropping the first set, Clatskanie roared out to a big lead in the second, only to see it shrink to a tight battle before the Tigers were able to put it away.

“We really talked about needing to finish a game to the end,” Baker said.

After that, she said she saw her players wake up, and win the next two sets in much more convincing fashion.

Clatskanie (1-1) is set to face Vernonia at home on Saturday.

NBA Finals: What is the best result for the books?

Should there be concern around the Yankees?

Should there be concern around the Yankees?

Mark Morris' Kendall Blondin sets a ball toward the net as Isabella Merzoian looks on during a game earlier this season at the Lumberdome. On Thursday, the Monarchs defeated Washougal in four sets.

Y Ta puts some heat on the ball during a match against Mark Morris on Feb. 18. On Thursday, March 4, Ta tallied 14 kills and seven digs as the Lumberjills defeated Fort Vancouver in four sets.