Become a Member
Read Today's E-edition
Share This
2B Soccer: Kalama falls to Onalaska on penalties
0 comments
Share this

Bills vs. Patriots: Updates and scores from MNF 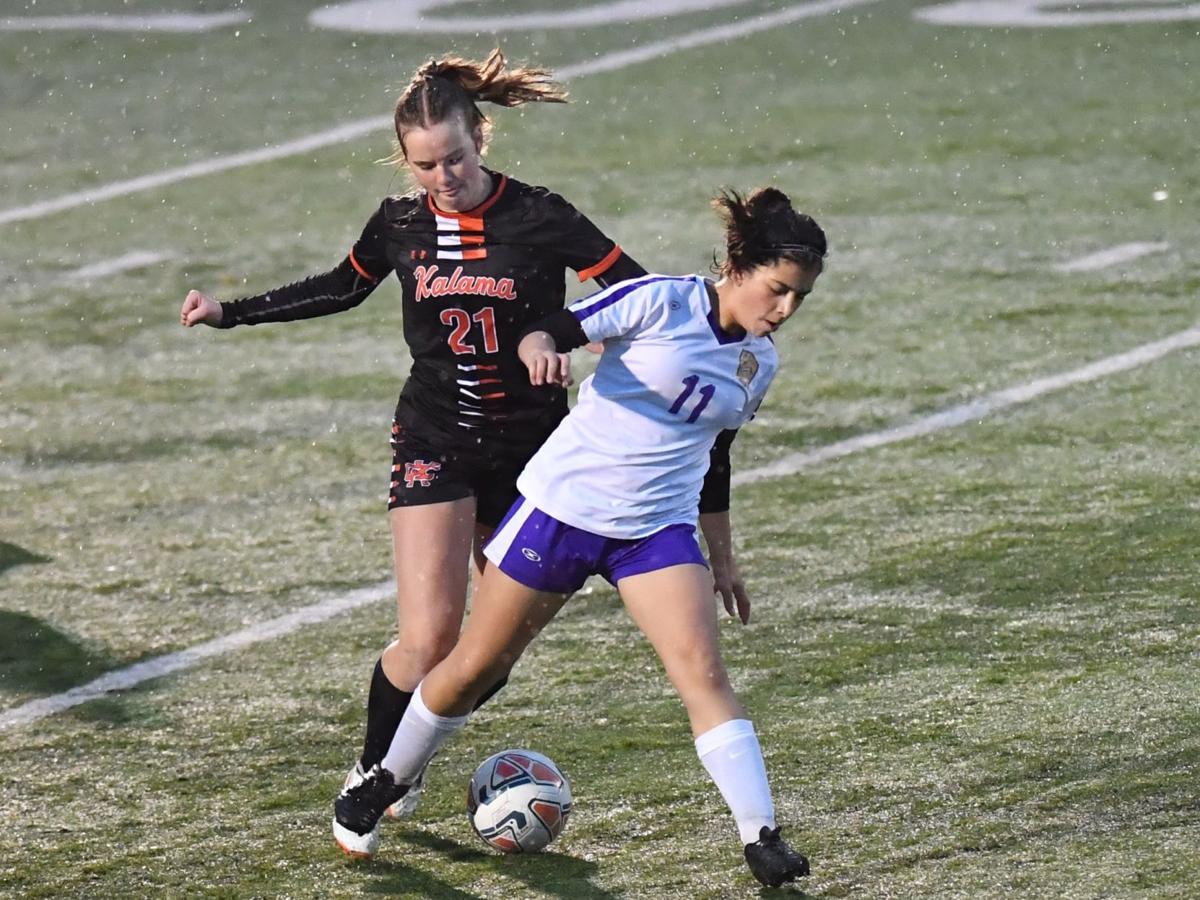 Kalama's Aubrey Doerty fights for possession with Onalaska's Kaiyah Sandridge during the first half of the Chinooks' match against the Loggers on Oct. 27. The two sides tied 0-0, but Onalaska won 4-3 on penalty kicks. 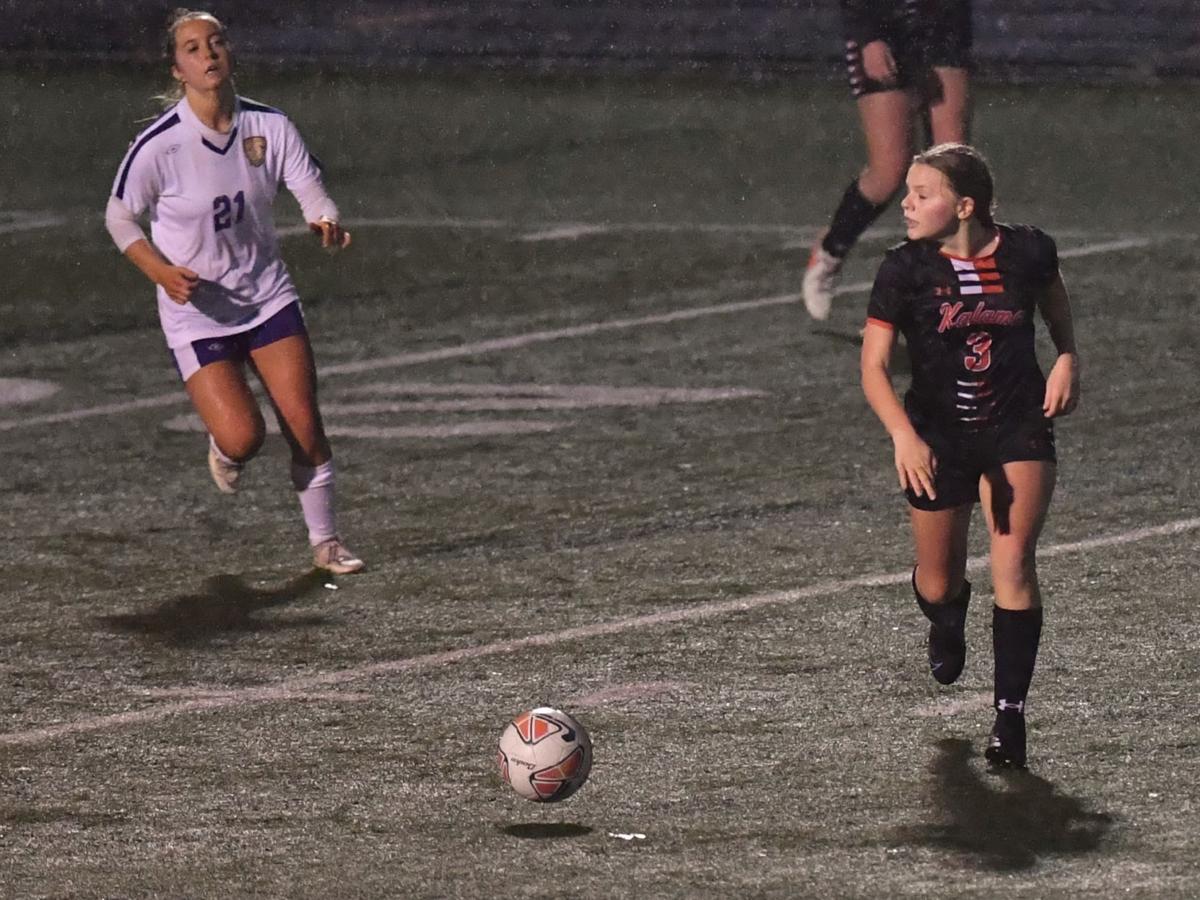 Kalama sophomore Josie Brandenburg looks for a shot in the second half of Onalaska's 1-0 win over the Chinooks on Oct. 27.

KALAMA — It wouldn’t really be a true Kalama vs. Onalaska matchup if it ended any other way.

For the fourth time in their past five meetings, the Chinooks and Loggers couldn’t settle their differences in 80 minutes and went to spot to decide things. This time, it was Onalaska that came out the better, winning the shootout 4-3 to take the match 1-0.

“It is what it is,” Kalama coach John Bates said. “I think we had the better chances than them. They outplayed us in the first half. I’m proud of these girls… PKs can go any way.”

Onalaska converted all four of its penalties. Josie Brandenburg, Sophie Given, and Kailey Shipley made theirs for Kalama, but Ava Beck’s shot went straight at Ony keeper Alex Cleveland-Barrera, and Bridgette Hollifield’s went off the crossbar to give the Loggers the win.

The result mattered little to Kalama, which had sealed a South 2B title Monday with a win over Stevenson. The Chinooks will be the South’s top seed going into the district tournament, and host the North’s No. 4 to open the postseason.

“There was no real stress on us,” Bates said. “Win or lose, we’re still alright.”

But the match did settle things behind Kalama; Onalaska’s win — its second on PKs in as many matches — gives the Loggers second place in the division, finishing ahead of Toledo.

For two halves, the two sides struggled through a driving rainstorm that made both the pitch and the ball slippery and limited much of any offense. Both teams put two shots on target in the first half, none of which should have troubled Cleveland-Barrera or Kalama keeper Jessica Meyer, but did, entirely due to the conditions.

“I’m proud of our kids; they played tough,” Bates said. “The rain took it away from us a little bit, the ball was fast-moving.”

Play opened up a bit more in the second half, with the Chinooks forcing four saves out of Cleveland-Barrera. The Loggers had the best chance of the night in the 42nd minute when the last Kalama defender slipped while going for the ball, giving Kaiyah Sandridge a 40-yard one-on-one opportunity, but Meyer stood strong and made the save.

Meyer finished with five stops on the night.

It’s the same way the regular season ended back during the winter. That time around, Onalaska won 1-0 on penalties at Kalama, but come the end of the District tournament, the Chinooks got their revenge in the finals.

This time around, Bates is expecting something similar:

Riverhawks put up a dozen on Ducks

TOLEDO — The Toledo girls soccer team scored three goals in the first four minutes of play against Toutle Lake on Wednesday, and the scoring only slightly slowed down the rest of the way in a 12-0 drubbing to end both sides’ regular seasons.

Nine Riverhawks found the back of the net, led by braces from Marina Smith, Briza Gallegos, and Maritza Salmeron.

Smith finishes the regular season with 23 goals, while Gallegos is in second on the team with 16.

Rose Dillon scored one goal for Toledo but assisted on four more, bringing her total up to 22 helpers on the season.

The Riverhawks even got starting keeper Daphnie Bybee into the scoring summary, starting Vanesa Rodriguez in net in the first half and letting their No. 1 netminder don a red and black jersey for a change. She needed just 12 minutes to score her first goal of the season — and Toledo’s fourth of the evening.

After going into halftime up 6-0, Toledo started the second half nearly as fast as it did the first, adding two more goals in the first five minutes before bagging four more the rest of the way.

With Onalaska’s win over Kalama, Toledo (11-4) finishes third in the 2B South. The Riverhawks will go on the road to begin their District tournament run, either at Ocosta or Forks.

Esary, defense leads Kalama to 2B state title over Napavine

LAKEWOOD — Jackson Esary had worked, bled, and sweated for three years since Kalama won a trophy his freshmen year. He’d charged headlong into…

KELSO — A season into his high school career, Payton Stewart finally got to play in front of a home student section, and the sophomore used th…

The operating word as the Kalama football team broke its Tuesday practice, with just three days remaining before its 2B State title matchup ag…

2A Boys Basketball: Lumberjacks light a fire in Lumberdome

LAKEWOOD — It was never a secret that Jackson Esary was a critical part of the Kalama football team’s success this year. He was hard to miss i…

NASELLE — Emerald Niemela helped a new-look Wahkiakum team pick up a 57-34 win over Naselle to open the season on Tuesday night. Niemela finis…

Leading up to the 2B football state title game Saturday at Harry E. Lang Stadium in Lakewood, we asked our friends over at the Chronicle to tr…

TOLEDO — It wasn’t always the prettiest, and there are certainly rough edges to be buffed and polished. But nobody from Toledo was getting wor…

Kalama's Aubrey Doerty fights for possession with Onalaska's Kaiyah Sandridge during the first half of the Chinooks' match against the Loggers on Oct. 27. The two sides tied 0-0, but Onalaska won 4-3 on penalty kicks.

Kalama sophomore Josie Brandenburg looks for a shot in the second half of Onalaska's 1-0 win over the Chinooks on Oct. 27.