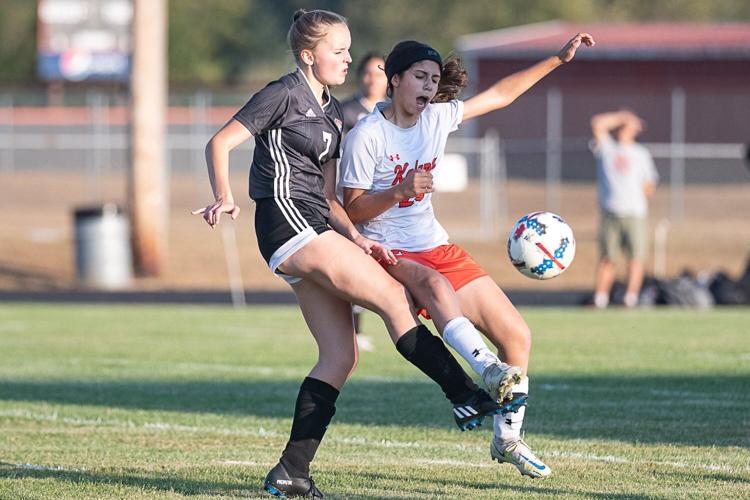 Kalama's Sienna DiCristina battles for possession during a match at Napavine, Monday, Sept. 19. DiCristina scored a goal in the first half to help the Chinooks come away with a 2-0 road win. 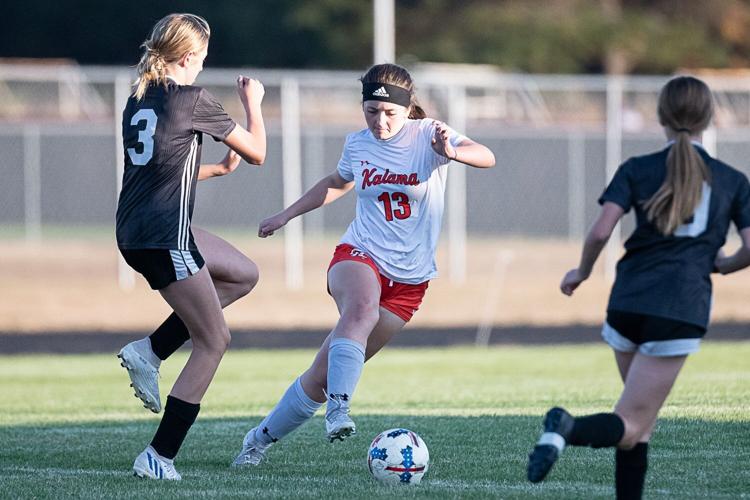 Kalama's Marin Ripp works the ball through a pair of Napavine defenders during a girls soccer match in Napavine on Monday, Sept. 19. The Chinooks earned a 2-0 road victory. 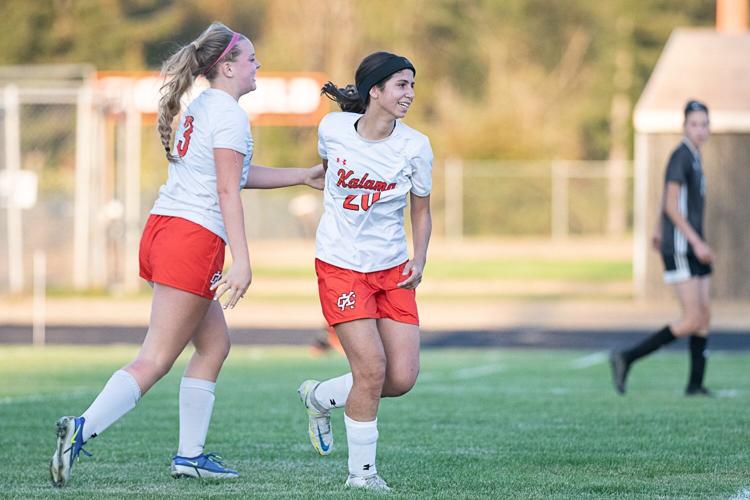 Kalama's Sienna DiCristina (20) celebrates with Josie Brandenburg after scoring a goal in the 35th minute of a match at Napavine on Monday, Sept. 19. The goal helped the Chinooks to a 2-0 win.

NAPAVINE — In a clash of orange and black it was Kalama’s girls soccer team that came out on top Monday, defeating Napavine 2-0 in a non-conference contest between Central 2B League foes. The Chinooks used a pair of goals just before halftime to hand the Tigers their first loss of the season.

In the 35th minute Josie Brandenburg sent a well-placed cross into the heart of the Napavine defense and eighth grader Sienna DiCristina promptly placed the ball in the back of the net.

The Chinooks kept the pressure on their hosts and the tactic paid off just as stoppage time began. That’s when Bridgette Hollifield broke loose and slipped her shot past the Napavine goalkeeper to give Kalama their two-goal lead.

“We outshot and outplayed Napavine,” Kalama coach John Bates said. “Luckily for (us), two of our fifteen or so shots on Napavine goal went in”

Bates tabbed Ava Ripp as player of the game for his Chinooks and noted that goalkeeper Jessica Meyer posted another shutout.

“(I’m) proud of the way the girls kept their composure under some stressful situations,” Bates said.

WOODLAND — Ridgefield came to the old Forest City on Monday and rolled back down to potato country a few hours later with a 4-0 win in 2A Greater St. Helens League girls soccer action.

The Spudders played on the front foot all evening, jumping out to a 2-0 lead in the first half and doubled their lead in the final forty minutes and change. Ridgefield managed 26 shots in the contest.

Woodland (2-3, 2-2 league) will travel to Longview on Thursday to play Mark Morris at The Northlake Field.

ONALASKA — Despite hailing from the land of dunes and jetties Ilwaco had no answers for the Sandridge sisters on Monday, suffering a 6-0 loss to Onalaska.

Brooklyn Sandridge had the hot foot with five goals on the night. Kaiyah Sandridge added one goal late in the second half.

Ilwaco found itself trailing 2-0 after the first ten minutes. Brooklyn Sandridge scored her next two goals in the 29th and 32nd minutes Her final score came during stoppage time to turn her haul into a glut.

Ione Sheldon put up three shots to lead the Ilwaco offensive attack. Sarah Frank added two shots but the Fishermen were unable to find the soft spot in the Loggers’ defense.

Ilwaco (2-1) is scheduled to play at Winlock on Wednesday. However, Winlock was forced to cancel a match at Adna on Monday due to a roster depleted by injuries.

- Toledo and South Bend played to a 1-1 draw on Monday. Attempts by The Daily News to reach Toledo for a game report went unrequited.

- Toutle Lake lost 5-0 to Forks. Attempts by The Daily News to obtain additional information from Toutle Lake were unsuccesfful.

- Winlock canceled a match at Adna after injuries depleted their roster.

“We had three injured players so we only had ten players to play and we decided to avoid (putting) them at risk before our season starts,” Winlock coach Cornelius Sanchez explained.

Pickleball is the fastest growing sport in the United States two years running. Now at 4.8 million players nationwide according to the Sports & Fitness Industry Association, a growth of 40 percent over the last two years. Here in Longview, 96 people are members of the Longview Pickleball Club which needs more infrastructure to meet the growing demand.

WINLOCK — It’s hard to be an elite athlete while on your hands and knees, trying to find your wind in the short grass like some invisible diam…

It’s never a particularly great thing if your kicker is the star of the show.

WOODLAND — The Beavers didn’t care too much about the odds, or the stats, or even the supposed experts who picked against them this week. All …

Kathryn Chapin scored a hat trick to lead R.A. Long to a dominant 5-2 win over Washougal in a 2A Greater St. Helens League girls soccer contes…

CAMAS — There was a lot of talk heading into Friday night’s matchup between Camas and Kelso. People said the Papermakers had lost a step and t…

A dominant R.A. Long second half was rewarded with a late goal from Olivia Durrett (70') to allow the Lumberjills to earn a 1-1 draw against 3A Kelso in the cross-river showdown, Saturday at Schroeder Field. Amiyah Emerson scored an early goal in the first half to give Kelso a 1-0 lead.

Behind the play of junior quarterback Holden Bea, Washougal defeated Mark Morris 39-22 in the 2A GSHL football contest, Friday. Bea totaled 328 total yards and four touchdowns, two through the air and two on the ground, in showcasing his elite talent.

Kalama head coach Jeni O’Neil is calling it a career. The 15-year head coach of the Chinooks volleyball squad announced the 2022 season will be her last coaching Kalama volleyball.

O’Neil has been a stalwart leader and constant winner at Kalama. She  delivered eight league titles, seven district titles and a 2016 State title over the course of her 15-year run.

Aaron Rodgers has his say on the NFL's greatest ever coach

Aaron Rodgers has his say on the NFL's greatest ever coach

Kalama's Sienna DiCristina battles for possession during a match at Napavine, Monday, Sept. 19. DiCristina scored a goal in the first half to help the Chinooks come away with a 2-0 road win.

Kalama's Marin Ripp works the ball through a pair of Napavine defenders during a girls soccer match in Napavine on Monday, Sept. 19. The Chinooks earned a 2-0 road victory.

Kalama's Sienna DiCristina (20) celebrates with Josie Brandenburg after scoring a goal in the 35th minute of a match at Napavine on Monday, Sept. 19. The goal helped the Chinooks to a 2-0 win.