Become a Member
Read Today's E-edition
Share This
Despite a disastrous 2021 season, here's what Washington football fans have to be thankful for
0 comments
Share this
1 of 2 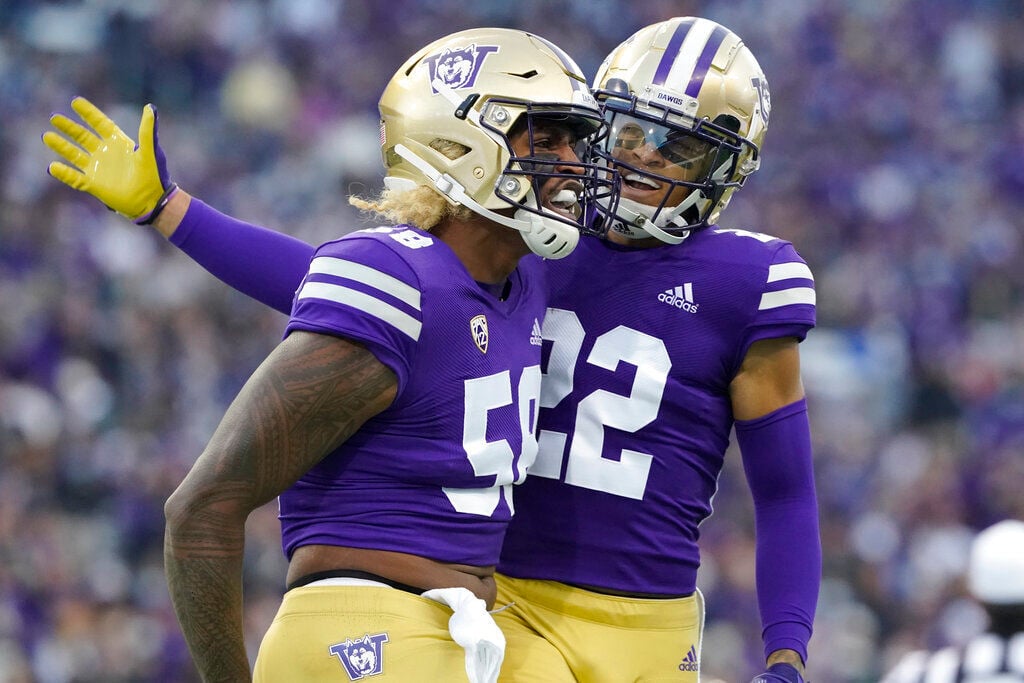 Washington linebacker Zion Tupuola-Fetui, left, and cornerback Trent McDuffie react to a play during the first half of the team's loss to UCLA on Oct. 16. 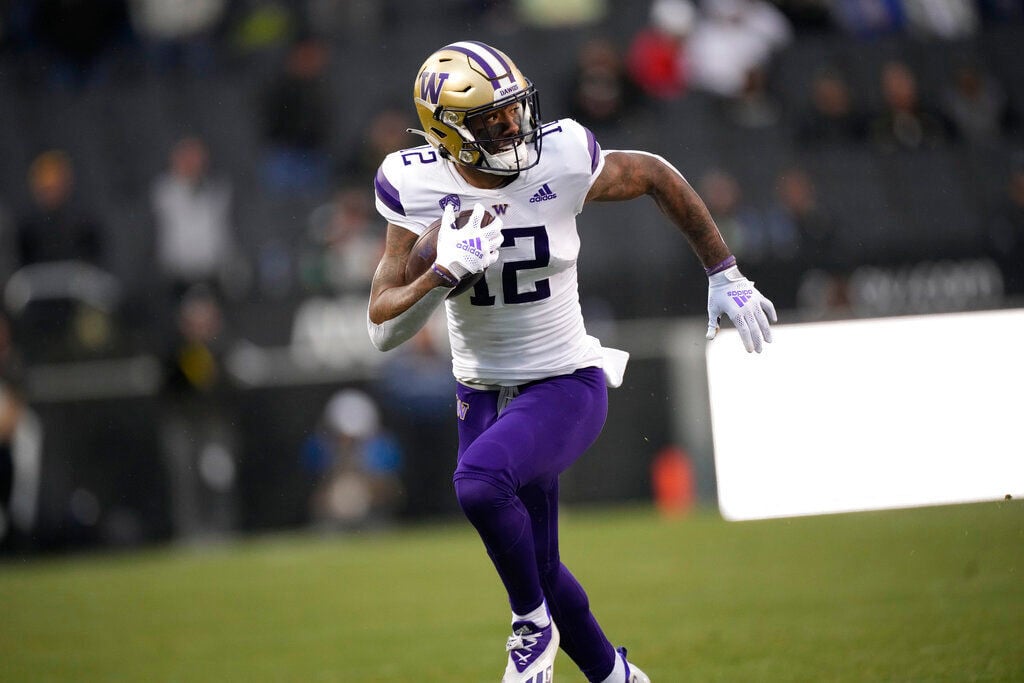 Washington wide receiver Ja'Lynn Polk takes off for a 55-yard touchdown in the second half of UW's 20-17 loss to Colorado on Nov. 20. After suffering a chest injury on the first play of the season, the transfer wideout scored in his return to action for the Huskies.

What do Washington football fans have to be thankful for?

Mired in the unwelcome mediocrity of a 4-7 season, with a fired head coach and a lame-duck staff, bracing for the holiday hangover of an unbearably anxious Apple Cup, the list of positives may appear precariously thin.

But like persevering rays of light poking out of the merciless Montlake gray, the positives are there.

You just have to look.

UW football fans should be thankful for a Husky secondary that has produced a historic season, scores be damned. Through 11 games, UW ranks first in the country in pass defense (133.6 yards allowed per game), second in opponent yards per pass attempt (5.2) and third in opponent pass-efficiency rating (101.86). Together, cornerbacks Trent McDuffie and Kyler Gordon and nickelback Brendan Radley-Hiles have punished and perplexed overmatched Pac-12 passing attacks.

Gordon did it after losing his starting job as a redshirt freshman in 2019. Radley-Hiles did it after hitting a wall at Oklahoma, then taking a leap of faith into the transfer portal. McDuffie did it so well, for so long, that opponents hesitate to sneeze on his side of the field.

UW football fans should be thankful for the sixth-year seniors who stayed: running backs Sean McGrew and Kamari Pleasant, a pair of unflinchingly selfless Californians who embraced every available role; outside linebacker Ryan Bowman, a former walk-on who followed his brother to UW, then fearlessly took the torch; center Luke Wattenberg, a soft-spoken starter at three separate positions; and punter Race Porter, an endlessly exuberant personality who ranks fifth in the country with 48.04 yards per punt.

UW football fans should be thankful for a trio of triumphant returns.

After tearing his Achilles tendon on April 16, All-American outside linebacker Zion Tupuola-Fetui returned to action just six months later — and snared a sack against Arizona the following week. And after suffering a chest injury on the first play of the 2021 season, then requiring emergency surgery, Texas Tech transfer wide receiver Ja'Lynn Polk returned against Colorado last week — notching a 55-yard fourth-quarter touchdown on a uniquely cathartic catch and run. And after being carted off the field and sustaining a concussion against Arizona, safety Alex Cook missed just a single game — eventually ripping off a 36-yard interception return against Arizona State.

UW football fans should be thankful for beer sales — albeit expensive — inside Husky Stadium. (This season, we're assuming, they've been particularly needed.)

UW football fans should be thankful for the 2019 Upland (Calif.) High School football team, which produced a pair of current contributors in redshirt freshman running back Cameron Davis and wide receiver Taj Davis.

UW football fans should be thankful for a handful of Husky legacies — including left tackle Jaxson Kirkland, inside linebacker Carson Bruener and quarterback Sam Huard. Each followed their fathers to the University of Washington, where they've made — or will make — their own impacts. The 6-foot-7, 310-pound Kirkland has started 38 games across the past four seasons, developing into a likely 2022 draft pick. As a second-year freshman, Bruener has ascended in the wake of Edefuan Ulofoshio's season-ending injury — recording 59 tackles with two forced fumbles, 1.5 sacks and an interception.

"I've told you guys before he's got great natural instincts," UW interim head coach and inside linebackers coach Bob Gregory said of Bruener on Monday. "I think that guy is going to be a really good player for a long time around here. It'll be fun to watch him play."

As for Huard? Fans haven't watched him play as much as they'd like this season. But the state's all-time prep passing leader is the future of the program nevertheless.

UW football fans should be thankful for hopeful first quarters, when the Huskies have outscored opponents 61-39 ... before trailing 193-184 the rest of the way.

(As Mae the bartender famously warned in "Ted Lasso," "It's the hope that kills you.")

UW football fans should be thankful for tight end Cade Otton — the pride of Tumwater — who may have played the final game of his Husky career. The 6-5, 250-pound junior suffered a leg injury against Arizona State — but not before registering 91 catches with 1,026 receiving yards and nine touchdowns in 39 career games.

After being named an All-Pac-12 first-team tight end in 2020, Otton could have opted for the NFL.

Instead, he stayed. He bought back in.

Speaking of which: UW football fans should be thankful for all the commits, and all the current Huskies, who remain despite a coaching change. Thus far, five 2022 recruits have de-committed, and a parade of players will inevitably plummet into the transfer portal. UW's next head coach, whoever he is, will have to replenish a roster and inspire respect.

But some will stay. They'll buy back in. They'll be "bricklayers," to quote a former Husky head coach, building a bridge between mediocrity and something more.

After an undeniably dreadful 2021 season, UW football fans should be thankful it's almost over.

And hopefully, there are better times ahead.

LAS VEGAS — As the Utah players celebrated the Pac-12 championship surrounded by roses and confetti, the memories of two teammates who couldn’…

SEATTLE — The third week of October is when it could have all fallen apart at Washington State. There were easy built-in reasons and explanati…

Who will the UW Huskies target to replace football coach Jimmy Lake? Here are possible candidates.

The hopes of winning a Pac-12 title all but vanished for the Washington State football team when it lost last Saturday’s showdown at Oregon, b…

SEATTLE — Travell Harris rode on the shoulders of the crimson fans that engulfed the field. Jayden de Laura waived a version of Ol’ Crimson be…

Washington linebacker Zion Tupuola-Fetui, left, and cornerback Trent McDuffie react to a play during the first half of the team's loss to UCLA on Oct. 16.

Washington wide receiver Ja'Lynn Polk takes off for a 55-yard touchdown in the second half of UW's 20-17 loss to Colorado on Nov. 20. After suffering a chest injury on the first play of the season, the transfer wideout scored in his return to action for the Huskies.