Mekhi Morlin of RBI stretches for the ball from his station at first base during a game against Camas in Winlock on Monday. 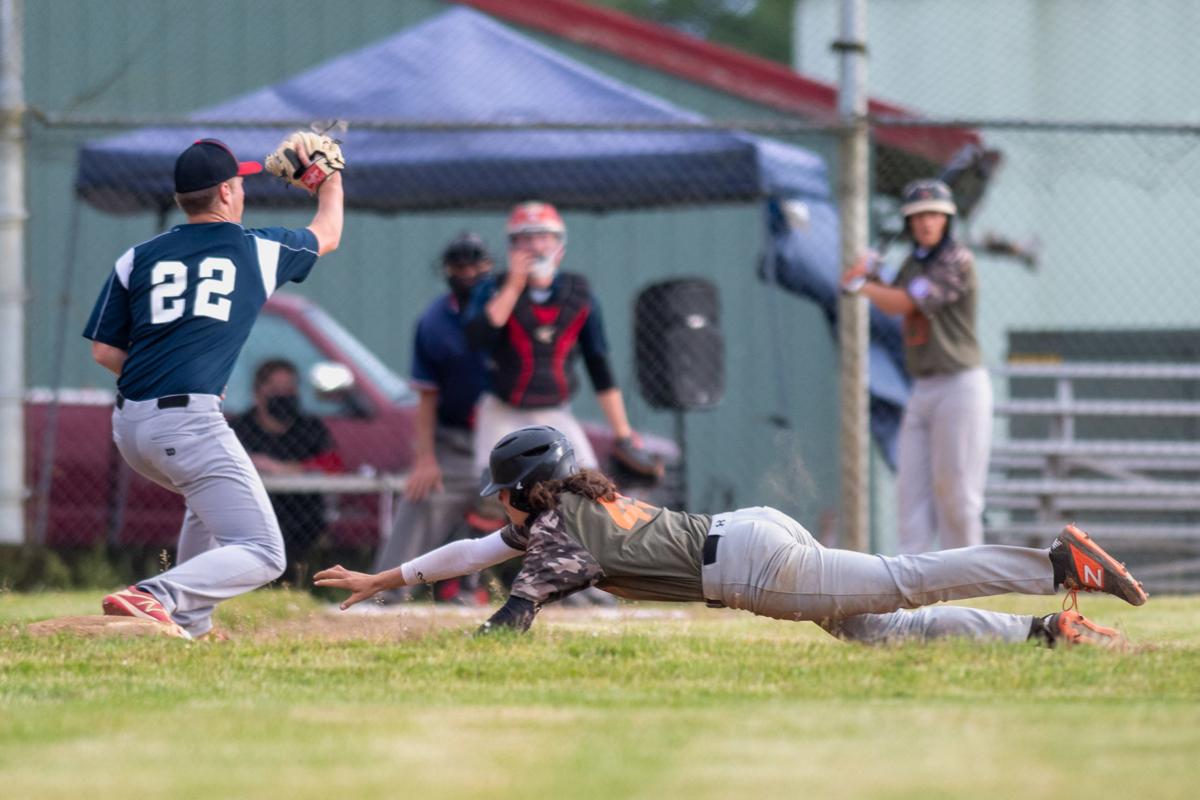 Jackson Hull of dives safely back to first base during a game against Camas in Winlock on Monday.

Rural Baseball Inc. earned its first home victory of the summer with a 17-8 drubbing of the Camas Shredders in Senior Babe Ruth baseball action in Winlock on Monday.

What was originally scheduled to be a nine-inning game could have been called off in the fifth inning when the Dirtbags held a 15-5 advantage. However, both teams agreed to keep playing ball since the field was open and the sun was still up.

“He’s like a steady hand, man,” RBI bench coach Nayt Taylor, said. “He’s always there and he always does his job.”

Chase Staup and Mekhi Morlin also had big days at the plate for the Dirtbags as both batters notched three hits, including a triple each. Morlin also drove in three runs while Staup plated two of his teammates. Ben Woodrum and Jackson Hull also had hits in the victory.

“Chase and Mekhi are swinging it well recently. Mekhi came up with a big hit when the game was still in the balance,” Taylor said.

Mateo Vodjansky took care of the primary pitching duties for the Dirtbags. In his first start of the year Vodjansky went 5 1/3 innings on the mound while allowing four runs and striking out four batters. JC Workman secured the final five outs of the game for RBI, including two strikeouts.

“Mateo competed well. He struggled early and then bounced back and we made plays behind him,” Taylor said. “After the first inning he settled in and we scored some runs. From there we just went.”

Rural Baseball Inc. will play MAC Baseball on Friday at 5 p.m. at Stan Hedwall Park in Chehalis for the first game of the Twin Cities Freedom Eagle Tournament.

Kyle McCrady was one of the many minor league baseball people who had their jobs essentially eliminated this season because of the COVID-19 pandemic.

Just as anyone who’s been paying attention has anticipated, the Washington Interscholastic Activities Association has handed down another adju…

Mekhi Morlin of RBI stretches for the ball from his station at first base during a game against Camas in Winlock on Monday.

Jackson Hull of dives safely back to first base during a game against Camas in Winlock on Monday.